Accessibility links
Gas Taxes May Go Up Around The Country As States Seek To Plug Budget Holes This year could see a wave of state tax hikes on gasoline and diesel. Oklahoma is one of about a dozen states seriously considering increases. 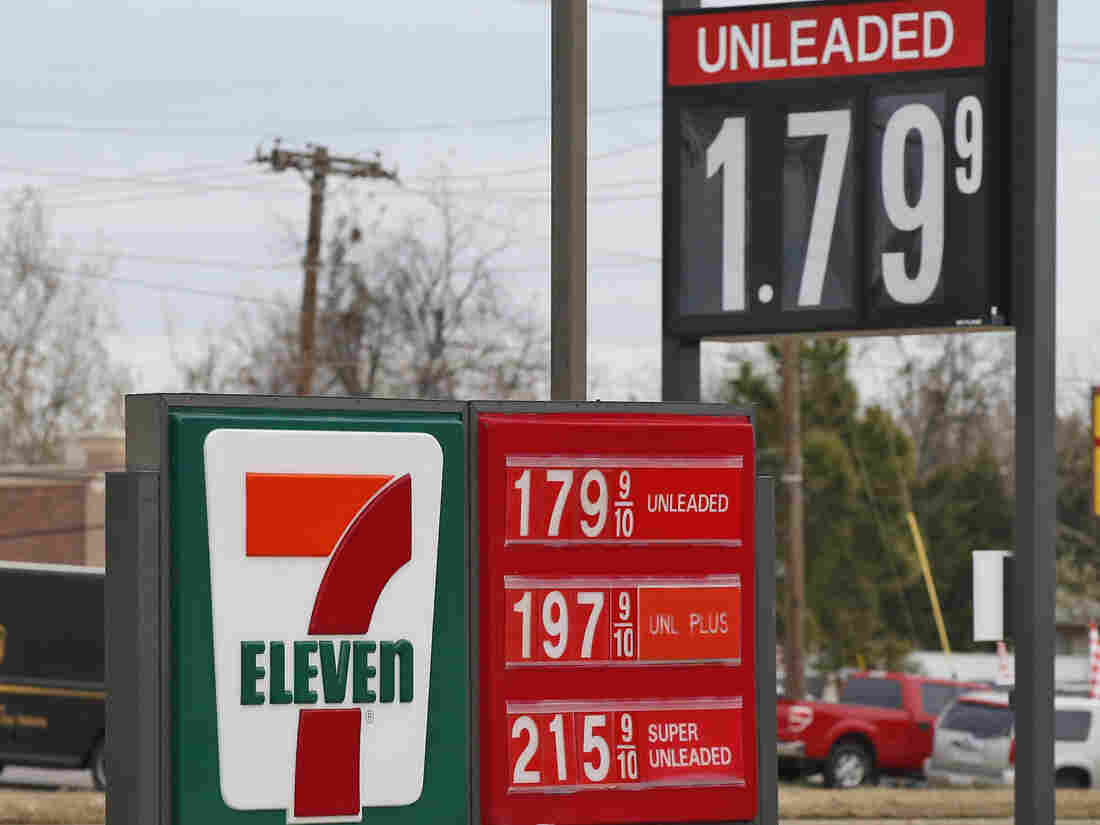 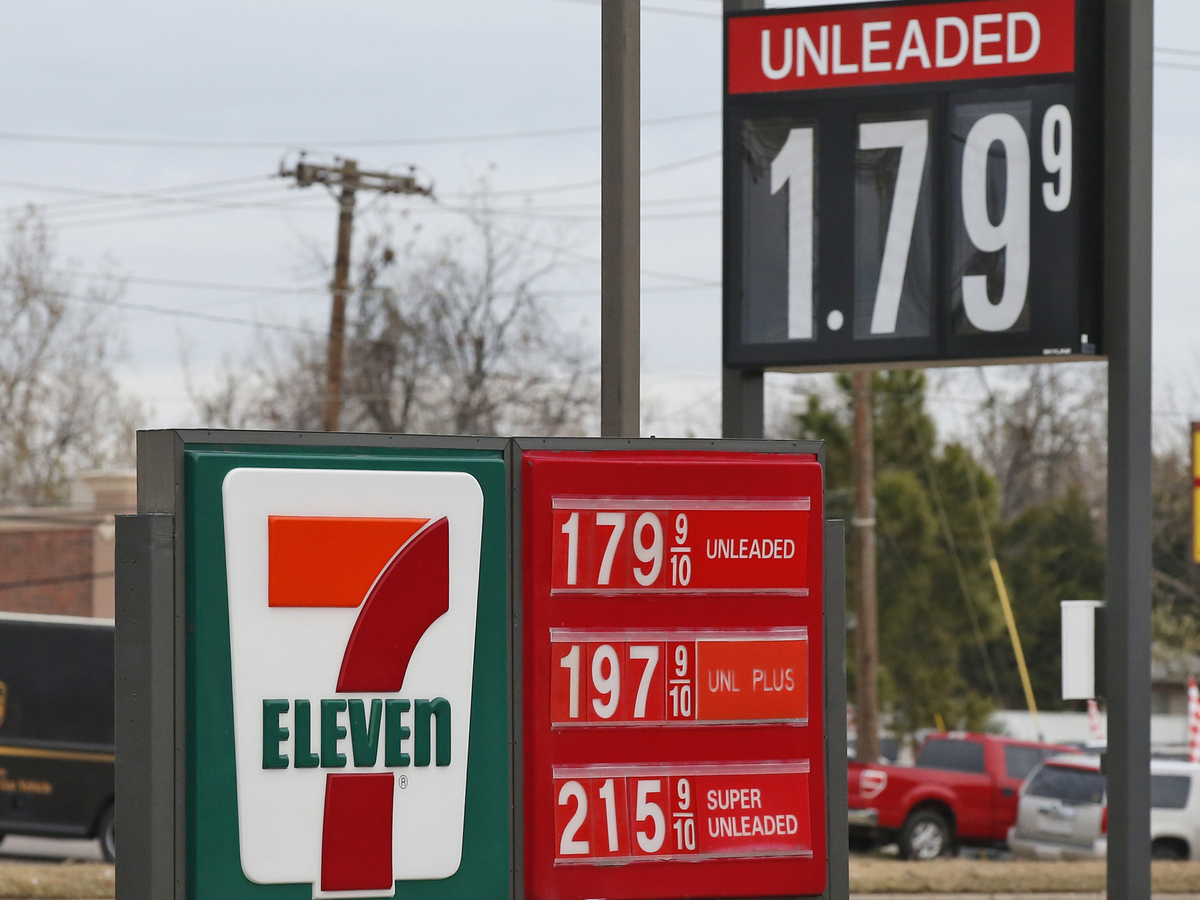 Gas prices seen at an Oklahoma City 7-Eleven in December. Amid a state budget slump, Oklahoma lawmakers are considering raising gas taxes for the first time in 30 years.

Oklahoma lawmakers are staring into a budget hole that's nearly $900 million deep — and they might not be able to cut their way out of it. Legislators are considering tax increases to help fund state government, and one idea is gaining traction: hiking taxes on gasoline and diesel.

This year could see a wave of state tax hikes on gasoline and diesel. Oklahoma is one of about a dozen states seriously considering increases, a list that includes Republican strongholds like Mississippi, Louisiana and Alaska, where Gov. Bill Walker has proposed tripling taxes on motor fuel.

Oklahoma's taxes on motor fuel haven't been touched since 1987, and there are a lot of similarities between the situation then and what the state now faces: an economy shaken by low oil prices and dwindling revenue streams that fund state government.

Raising fuel taxes helped the state in the 1980s, and lawmakers might try it again. Carl Davis, research director at the Institute on Taxation and Economic Policy, says Oklahoma lawmakers have good reason to raise taxes at the pump.

There's really no such thing as a Republican pothole or a Democratic bridge. It's an issue that brings the parties together.

"The state has one of the oldest gas tax rates in the country," he says. "It's turning 30 years old, having not budged a single penny in 30 years."

Over the decades, the value of that unchanged tax rate — 16 cents per gallon of gasoline and 13 cents per gallon of diesel — has eroded with inflation. Today, Oklahoma has some of the lowest motor fuel taxes in the country, the American Petroleum Institute reports.

Davis says more fuel-efficient cars and trucks have also taken a bite out of that revenue stream.

"It's just the math just doesn't work to levy the same gas tax rate for 30 years. It just loses purchasing power," he says.

Pay at the pump

A lot of stars have to align for these tax increases to pass through various state legislatures, but there are a few reasons politicians — even in red states like Oklahoma — don't always mind raising them.

One is that the lion's share of gasoline and diesel taxes in Oklahoma and other states are directed to transportation — agencies and programs that build and maintain highways, roads and bridges.

6 Lesser-Known Obamacare Provisions That Could Evaporate

"There's really no such thing as a Republican pothole or a Democratic bridge," Davis says. "It's an issue that brings the parties together."

Second, motor fuel taxes are paid by users, which, "in conservative circles," Davis says, "can be an especially appealing aspect of it."

Motor fuel taxes are regressive: They affect low-income people more than those with higher incomes. But, in recent years, gasoline and diesel prices have been pretty low. And, unlike with other taxes, Davis says there's a third reason motor fuel tax increases can be more politically palatable: The business community often supports them.

"At some point it's just not worth refusing to pay a few more pennies per gallon if the cost is going to be having to hit a pothole and get your vehicle realigned or wasting time and money stuck in traffic," he says.

The U.S. Chamber of Commerce has backed increases of federal taxes levied on motor fuel, and the State Chamber of Oklahoma supports raising motor fuel taxes as long as the increase is used to fund transportation infrastructure, says Mike Jackson, senior vice president of political affairs and advocacy.

"We have always maintained that the tax must be dedicated to the sole purpose of the preserving and improving our roads and bridges," he wrote in an emailed statement.

Motor fuel taxes are a relatively small revenue stream for Oklahoma, generating about $474 million in 2016, state tax commission data show. That number includes revenue from taxes on other fuels, including compressed and liquefied natural gas and aviation fuels — a drop in the bucket compared with the $4.1 billion and $2.5 billion in income and sales tax revenues.

Even if the stars do align as Davis suggested, any tax increase proposed by Oklahoma lawmakers will need a legislative supermajority — a tall order, even with a $900 million budget gap. A state ballot question to raise fuel taxes was trounced in 2005, and a bill introduced during the 2016 legislative session died in committee.

New motor fuel tax legislation is being written for Oklahoma's upcoming legislative session, which starts in February. State lawmakers and Davis point to one final reason these tax hikes might fly in 2017: It's not an election year.

"That's a major reason why this is an issue worth watching this year," Davis says.