Accessibility links
What The End Of 'Wet-Foot, Dry-Foot' Means For Cubans The Obama administration has ended a program that let Cuban migrants enter the U.S. without visas. Scott Simon talks to Cuban author Carlos Eire, who was airlifted out of Cuba as a child in 1962.

The Obama administration has ended a program that let Cuban migrants enter the U.S. without visas. Scott Simon talks to Cuban author Carlos Eire, who was airlifted out of Cuba as a child in 1962.

The Obama administration has ended the so-called wet foot, dry foot policy which allowed migrants fleeing Cuba without a visa to automatically stay in the United States. The White House said the change was an important step toward continuing to, quote, "normalize" relations with Cuba, a process that began when diplomatic relations were restored in 2014. More than a million Cubans have come to the United States since the Cuban revolution in 1959. Carlos Eire was one of 14,000 children airlifted out of Cuba. In 1962, he wrote of course the National Book Award-winning memoir of his boyhood "Waiting For Snow In Havana." He's now a professor of history and religious studies at Yale and joins us from Guilford, Conn. Carlos, thanks so much for being with us.

CARLOS EIRE: Oh, thanks for inviting me to be on your show, Scott. It's always nice to talk to you.

SIMON: How do you feel about the policy change?

EIRE: Well, you know, it's a complicated issue because the wet foot, dry foot policy always had an element of unfairness about it, but it fits in with President Obama's plan for so - normalizing. I'll put quotation marks around normalizing. What he had done previously is basically announced to the world that he didn't care about human rights in Cuba. So now he's made it clear that no Cuban who arrives in the United States can be considered a refugee. That is, somebody who's fleeing an oppressive regime or fears for their life. So it's part and parcel of his policy. And I can kind of see why he waited till the last minute to put this policy into effect because there would have been a lot of pushback from some quarters.

SIMON: Well, let me ask this - should Cubans be afforded a special status that is not given people who flee crime or violence, say from Mexico or El Salvador in the hemisphere, or desperation and tyranny, as in present day Venezuela?

EIRE: Right. Well, this is a - it's - again, it's a very complicated issue because not everyone who flees Cuba is fleeing political repression. There are individuals in Cuba involved in the opposition to the Castro regime, and they are really having a very difficult time right now because repression has increased since normalization. It's gone - it's really spiked and skyrocketed and the number of arrests have just gone through the roof. So there are people who are under duress. They're generally not the ones who flee in rafts and boats. And to further complicate the issue, a lot of the individuals who've been coming for the past 20 years or so, most people don't realize is they have permission to travel back to Cuba. And some of them travel back twice a year, and they go loaded with presents for their families, gifts, things they can't get in Cuba.

So the net result is that for the past few years thousands of these so-called refugees have been traveling back to Cuba. And some of them actually end up - you know, because they have good jobs in the U.S., some of them end up taking their whole family to a beach resort, so they basically go on vacation in Cuba. So that further complicates the whole issue of whether they're political refugees or not. It's been messy for a while, and now it's kind of been cleared up, but it remains to be seen whether the policy can stay in effect under Donald Trump.

SIMON: Well, that would be my - would you want to see it undone by a President Trump?

EIRE: I'm not sure. I've always had mixed feelings about this. And so have most other Cuban refugees who came in the '60s, '70s and '80s when the situation was totally different because wet foot, dry foot has been in effect since the Clinton administration. By that time, things had changed because part of the deal was this going back to Cuba to visit family. Twice a year you can go. And that began to complicate matters. And there's resentment in the Cuban exile community from those who came and really feared for their lives and feared for their welfare under a repressive regime. There's been resentment for these Cubans who go back. And I have a special name for them. I call them YoYos 'cause they keep going back and forth.

SIMON: Well, thank - Carlos Eire, we have to go. Professor of history and religious studies at Yale, thanks so much for being with us. 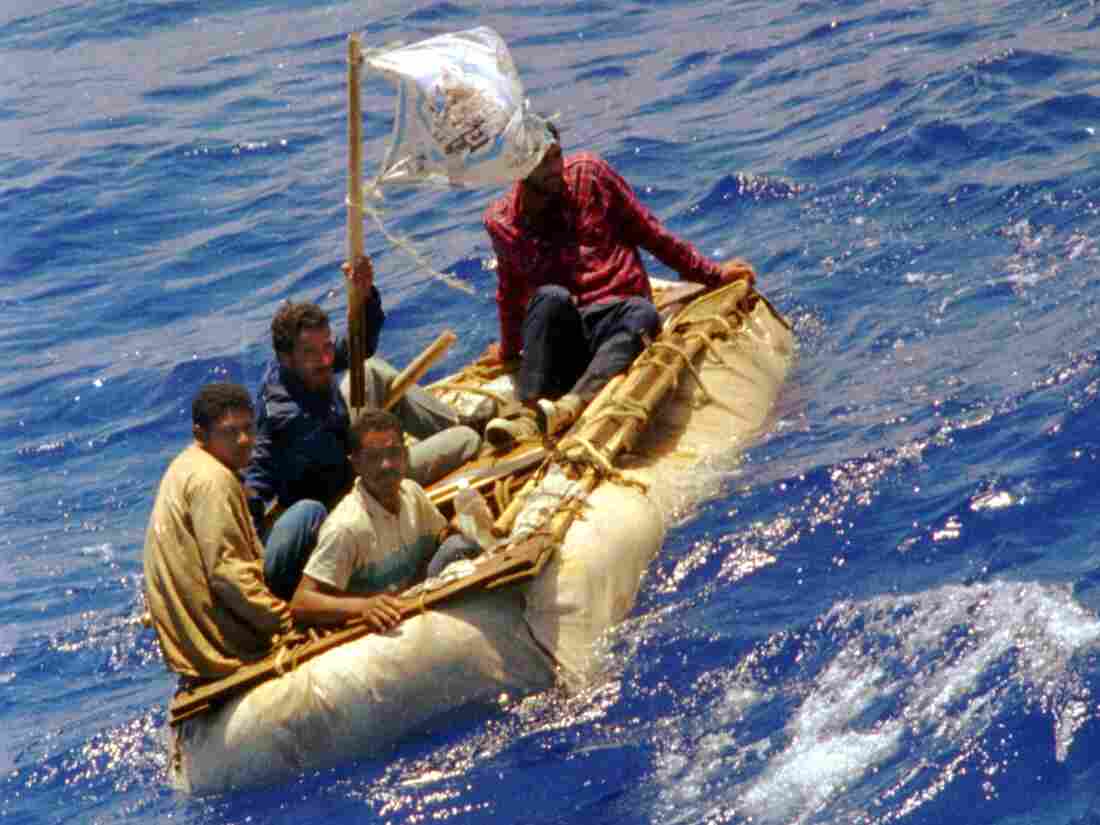 Cuban refugees float in heavy seas 60 miles south of Key West, Fla., in 1994. The Obama administration is ending a two-decades-old policy of allowing Cuban refugees to stay in the U.S. if they can make it to U.S. soil. Dave Martin/AP hide caption 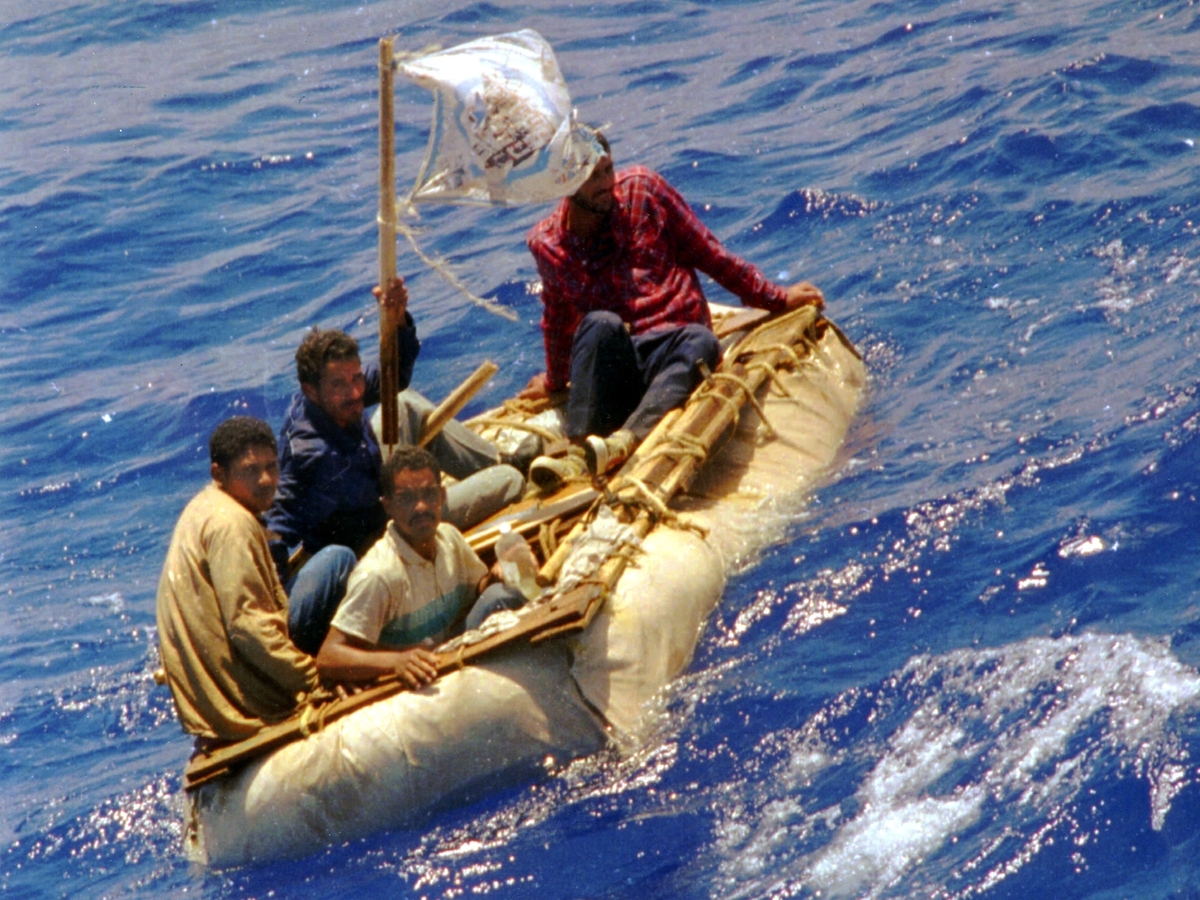 Cuban refugees float in heavy seas 60 miles south of Key West, Fla., in 1994. The Obama administration is ending a two-decades-old policy of allowing Cuban refugees to stay in the U.S. if they can make it to U.S. soil.

The Obama administration is ending a two-decade-old policy that allowed Cuban refugees to enter the United States without visas.

Known as the "wet-foot, dry-foot" policy, it began in 1995 under then-President Bill Clinton in response to a wave of Cubans fleeing the island in boats. The U.S. turned away those who were intercepted at sea ("wet-foot"), while permitting Cubans who managed to get to U.S. soil ("dry-foot") to stay and eventually become legal residents.

According to The Associated Press, the policy shift, which is effective immediately, is part of the process of normalizing relations between the U.S. and Cuba. The U.S. has been pressing Cuba to take back people who are not allowed to stay in the U.S. The Cuban government has always opposed wet-foot, dry-foot, arguing that the policy encouraged people to leave.

As The Washington Post reports, Cuban migration has increased notably since July 2015 when the two countries officially renewed relations, ending decades of Cold War estrangement. A December 2016 report by the Congressional Research Service says the maritime route out of Cuba has become less popular as more migrants choose to enter the U.S by land. More than 46,000 Cubans without visas attempted entry in the 2016 fiscal year, many along the Southern border and twice as many as in FY 2014.

In a statement released late Thursday by the White House, President Obama said:

"Effective immediately, Cuban nationals who attempt to enter the United States illegally and do not qualify for humanitarian relief will be subject to removal, consistent with U.S. law and enforcement priorities. By taking this step, we are treating Cuban migrants the same way we treat migrants from other countries. The Cuban government has agreed to accept the return of Cuban nationals who have been ordered removed, just as it has been accepting the return of migrants interdicted at sea."

The president also announced the end of the Cuban Medical Professional Parole Program, which allowed Cuban doctors and other medical personnel to seek temporary legal status in the U.S. Obama said the program "risks harming the Cuban people" and that such personnel are still eligible to seek asylum at U.S. embassies and consulates abroad.

Both policy changes were condemned by Cuban-American Rep. Ileana Ros-Lehtinen, R-Fla., who said in a statement, "In another bad deal by the Obama administration, it has traded wet foot/dry foot for the elimination of an important program which was undermining the Castro regime by providing an outlet for Cuban doctors to seek freedom from forced labor which only benefits an oppressive regime."

Sen. Marco Rubio, R-Fla, released a statement saying the existing policy needed to be revamped, not ended. In particular, he said he wanted Donald Trump to reverse the cancellation of the medical professional program when he becomes president next week. Rubio added that he had spoken with Vice President-elect Mike Pence this evening and was "heartened by the fact that in a week we will have a new administration committed to discarding the failed Cuba policy of the last two years."