Accessibility links
Not My Job: We Quiz Gymnast Simone Biles On The History Of The iPhone The U.S. gymnast took home four gold medals from the summer Olympics in Rio, and now she has a chance for glory once again. 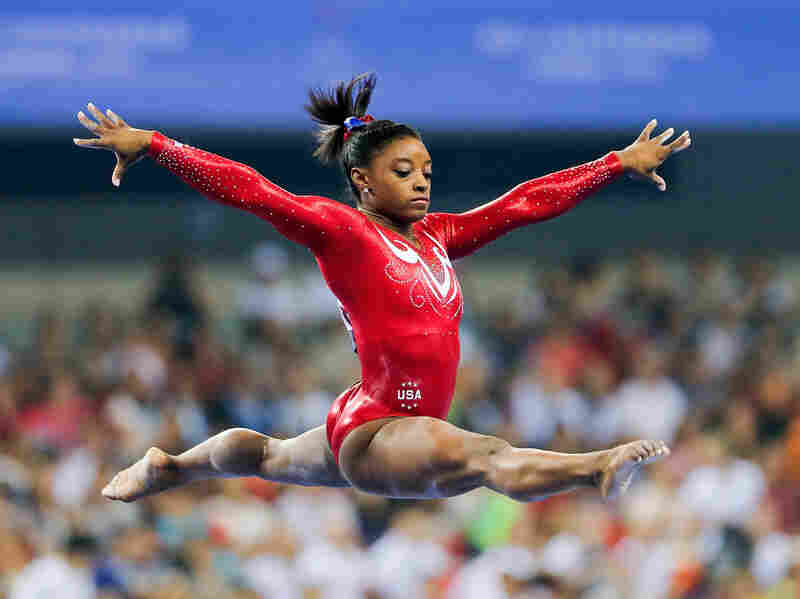 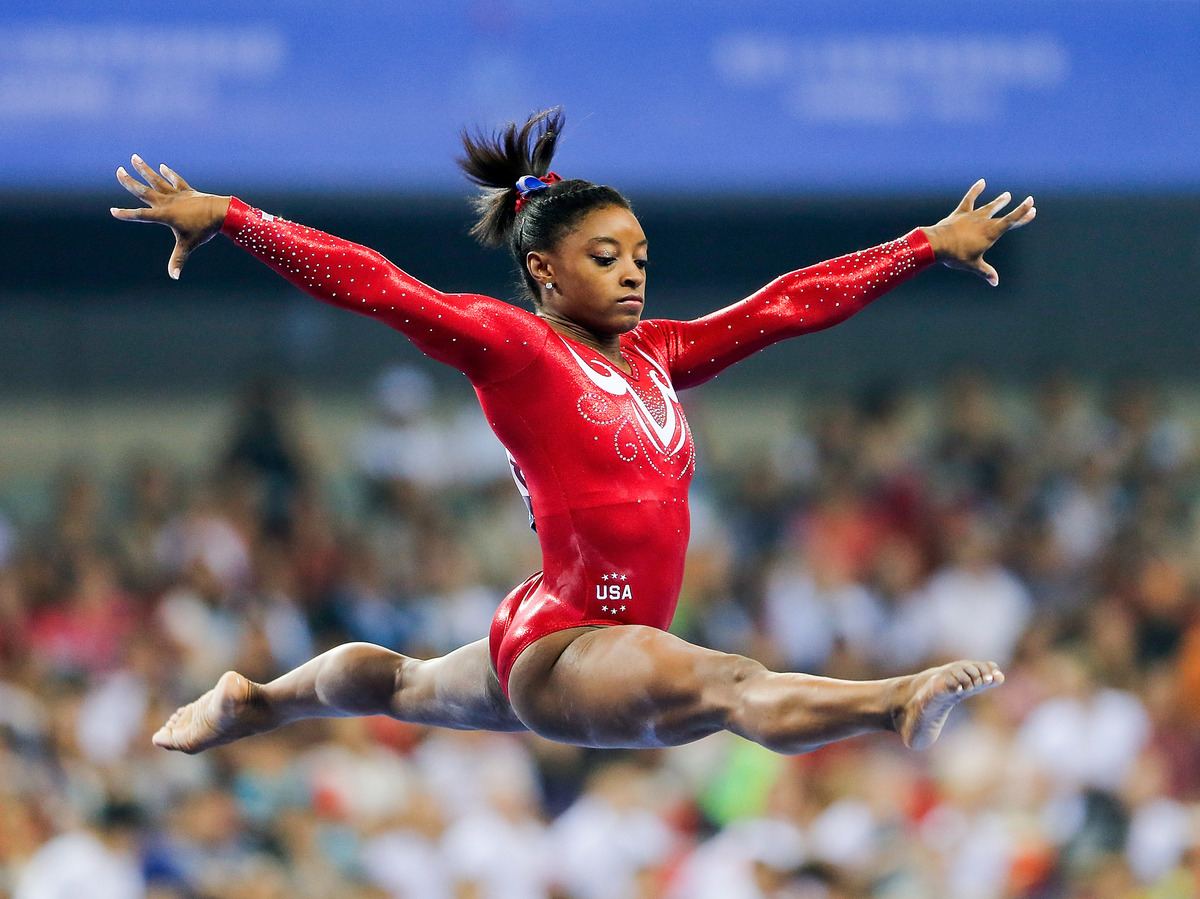 Just in case U.S. gymnast Simone Biles hasn't won enough recently (she took home four gold medals from the summer Olympics in Rio) today we're giving her yet another shot at glory. We've invited her to play our Not My Job game, in which we quiz very successful people on things that have absolutely nothing to do with their success.

Guest host Tom Hanks will ask Biles three questions about the history of the iPhone, which marks its 10th anniversary this year.

Now is the part of our show where Olympic gold medalists have a chance to win something far less shiny. Our guest took home four gymnastics gold medals from Rio. She's the first woman in two decades to win back-to-back Olympic all-around and world titles. Joining us, we assume, upside down from the uneven parallel bars somewhere in America - actually, Houston - Simone Biles, welcome to WAIT WAIT... DON'T TELL ME.

HANKS: You are probably the greatest athlete in the world. Have you ever been tempted to use your powers for evil?

HANKS: You do have a signature move, right, which...

HANKS: Could you tell us in gym speak what that move is?

BILES: Well, I have one on floor, and it is actually named after me, so it's called the Biles. But I will flip twice in the air with a straight body and then at the end of it, I'll do a half twist.

PAULA POUNDSTONE: So they named that after you?

HANKS: Has anybody else dared to try it?

POUNDSTONE: I had been doing it for a while.

POUNDSTONE: I don't do it publicly.

BILES: Well, you have to compete it at a world or Olympic competition.

HANKS: No, I got - I have a question that - how do you work up the nerve to try it for the first time?

BILES: It's a little bit scary, but you have foam pits in your gym to help you in case you crash.

POUNDSTONE: I never had that.

HANKS: You are so successful at such a young age. You've met your celebrity crush and you've gotten to go on the set of your...

POUNDSTONE: Wait, who was...

HANKS: I didn't say that.

POUNDSTONE: Oh, my gosh. This is such a great moment. No, Simone, who was your celebrity crush?

BILES: It was Zac Efron.

HANKS: And let's remember, Zac Efron is so foxy he might be a Republican.

FAITH SALIE: Simone, what did you say? Were you tongue-tied?

BILES: I did. I kind of hid behind one of my teammates, Aly. And I didn't know what to say. And I got scared because he was so close to me. I felt like, I don't know, it was just, like...

SALIE: He must have made your heart do flips, right?

BILES: Yes, I thought I was going to pass out.

POUNDSTONE: Simone, what the hell was that noise?

BURBANK: Are you OK, Simone?

BILES: No, yeah, I'm OK. My dog got stuck underneath the counter so I had to move the chair.

BURBANK: You be careful.

POUNDSTONE: Look, the most gymnastically inclined woman in the world and she has a clumsy dog.

HANKS: In an interview with Vogue, you were asked who the most intense athletes are in the Olympic Village, and you said Olympic speed walkers.

HANKS: Is that true?

HANKS: What the heck is their problem?

BILES: (Laughter) They never stop working. They speed walk to breakfast, lunch, dinner. They're always working out and I don't get it. Like, our village, villa, there was, like - there's a track that goes around the whole entire village. It's a walking path. So sometimes you would have to beat them on the other side or else they would, like, run into you. If anybody gets in their way, they don't even slow down. They just zip around you. They just, like - they don't care.

HANKS: I don't think any Olympic speed walker will ever be called the greatest athlete in the world, so you do have that over them.

BILL KURTIS: This changes everything again.

HANKS: All right. Now, how old are you again, Simone?

HANKS: Oh, dear Lord. This week marks the 10th anniversary of the iPhone, marking 10 years since many of us paid attention to our kids.

HANKS: It is also the 10th anniversary of, well, you being 9 years old. So we're going to ask you three questions about the history of this revolutionary device. You get two of them right and you'll win a prize for one of our listeners - Carl Kasell's voice on their iPhone voicemail, I guess.

HANKS: Bill, who is Simone Biles playing for?

HANKS: OK, hand on your buzzer now. In the time since it came out, people have used the iPhone in ways that Apple engineers did not expect, as in which of these? A, in 2016 GOP debate, Marco Rubio was spotted standing on two iPhones in an attempt to look taller; or B, in 2014, two brothers in Seattle attempted to popularize i-Ping i-Pong, in which old phones were used as paddles; or C, in South Korea, instead of their fingers, many people use sausages to type on their phones. A, B, or C - Marco Rubio, i-Ping i-Pong or sausages.

HANKS: You're saying B?

HANKS: OK, you're sticking with B.

HANKS: All right. Well, unfortunately, the answer is C, sausages. No lie.

POUNDSTONE: It's a ridiculous answer.

HANKS: Is this your first time on WAIT WAIT... DON'T TELL ME?

BILES: Yes, but that's not a thing. Nobody uses sausages on their phone.

HANKS: Let me explain why.

POUNDSTONE: I would - is this unsubstantiated?

HANKS: See, sausages can work on a touch screen just like fingers because they're made out of meat.

POUNDSTONE: Thank you, Simone, a voice of reason.

HANKS: All right, next question. The key to the iphone's success is, of course, apps. Now, which of these is a real app that was unveiled in 2008? A, Boing, which, for $4.99, claimed to make your iPhone bounce right back to your hand when you inevitably dropped it; B, an app called I Am Rich, which costs $999.99 and did absolutely nothing; or C, Appendectomy, which, for 99 cents, gave users helpful instructions on removing their appendix at home and why. Which of those - let's admit it - two answers - do you think is the real app?

POUNDSTONE: So what is it?

HANKS: I Am Rich, which, apparently, at least eight people actually bought and four of them are on stage with me.

HANKS: All right, Simone, here's your last question. When it came out, the iPhone was hailed for its simple, clean look. Things could have gone very different if Apple had gone with its original design for the iPhone. What was that design? Was it A, packed all the phone features into a wristwatch but then they realized that no one would buy something like that? Was it B, in a tribute to Steve Jobs, it was a touch sensitive black turtleneck? Or C, was it actually shaped like an apple? Wristwatch, turtleneck, apple.

BILES: The first one, A.

HANKS: Bill, how did Simone do?

KURTIS: You know, we can't let anybody go away a loser. And if anybody in this world is not a loser, it's little Simone Biles.

HANKS: Simone Biles has written a book. It's called "Courage To Soar." It's available wherever books are sold. Simone Biles, thank you so much for joining us on WAIT WAIT... DON'T TELL ME. It was a pleasure.

HANKS: In just a minute, crack open a cold one in our Listener Limerick Challenge game. Call 1-888-WAIT-WAIT to join us on air. We'll be back in a minute with more WAIT WAIT... DON'T TELL ME from NPR.