Accessibility links
Democrats Hope Sunday Obamacare Rallies Can Help Them Regain Momentum Congressional Democrats are organizing what they call a "Day of Action," with events scheduled from California to Illinois to Maine. Sen. Bernie Sanders is among the key organizers. 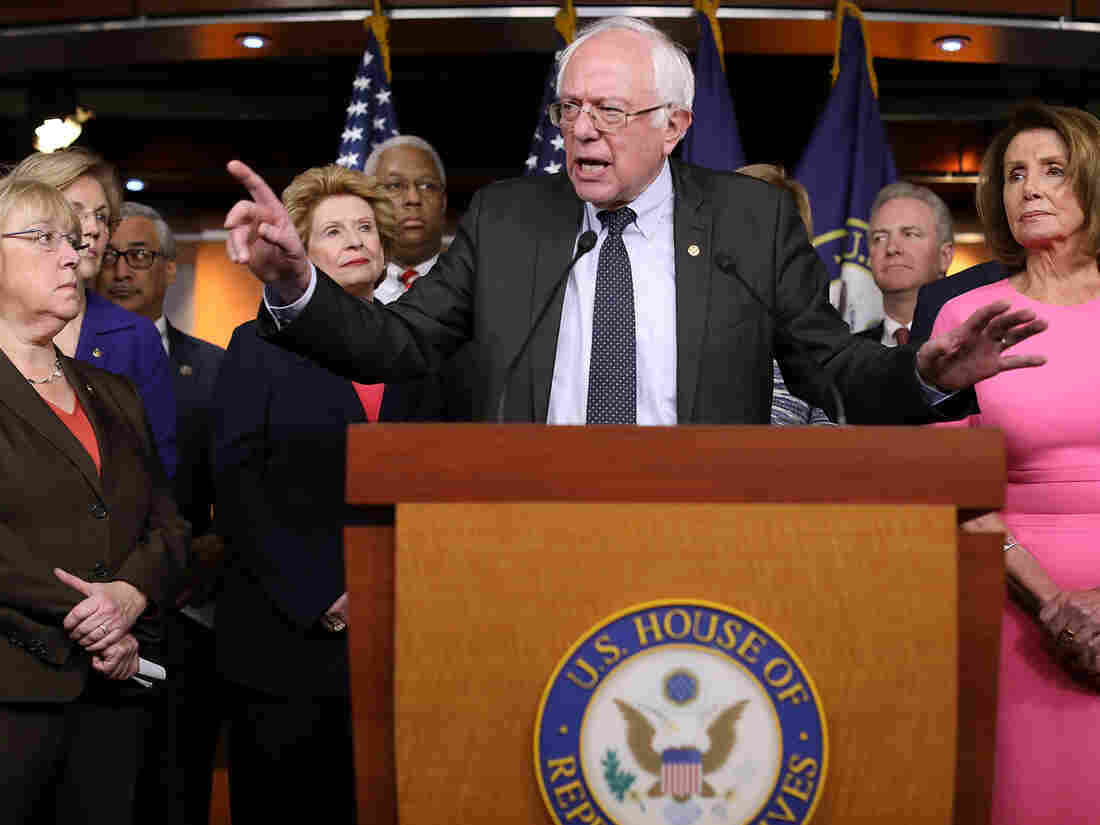 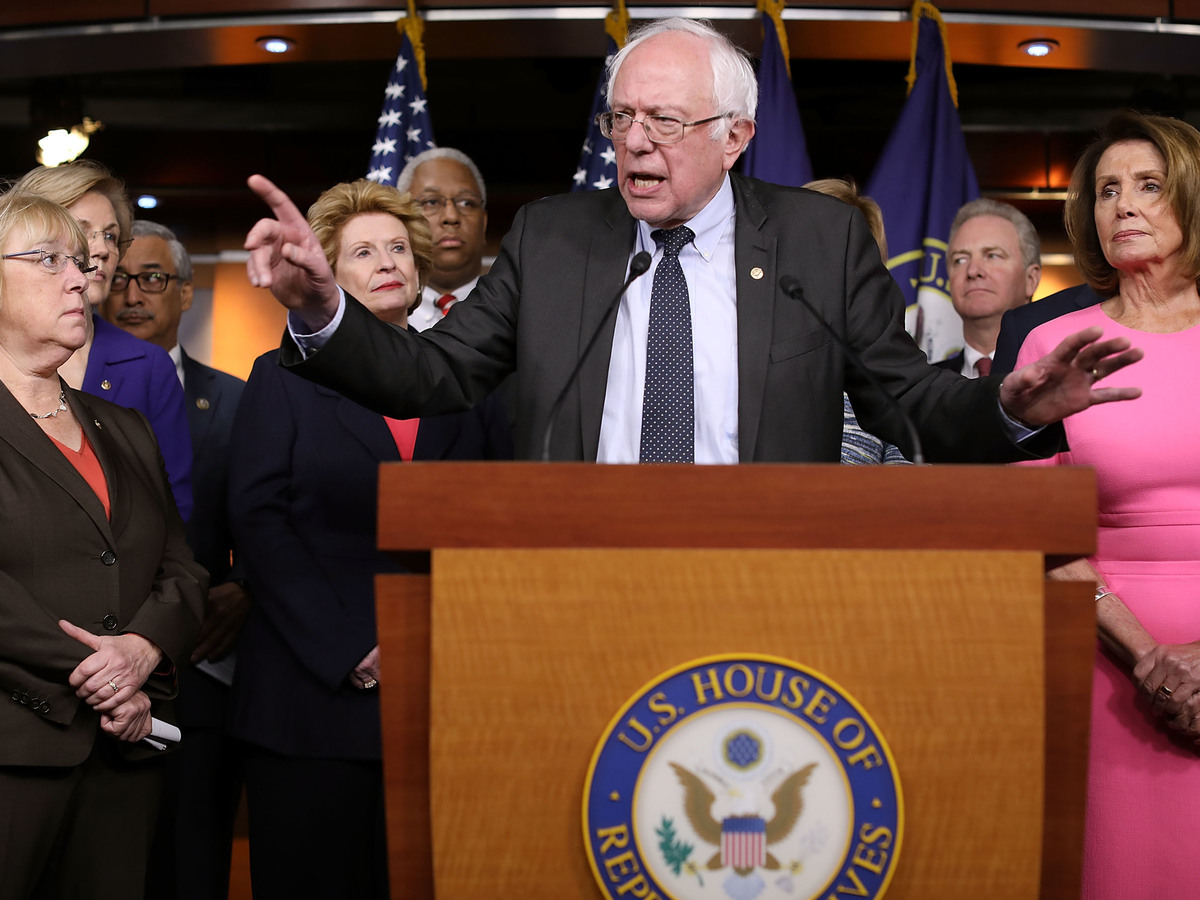 Sen. Bernie Sanders (I-VT) told NPR, "The goal is to rally the American people against a disastrous Republican proposal."

This week, the House and Senate took the first substantial step toward repealing Obamacare.

Today, Democrats are holding rallies across the country, in an attempt to get some public momentum behind their longshot goal of blocking that effort.

Congressional Democrats are organizing what they call a "Day of Action," with events scheduled from California to Illinois to Maine.

And in a demonstration of just how much clout the runner-up candidate in last year's Democratic presidential primary now has within the party that he's still not a member of, Vermont Sen. Bernie Sanders will host the most high-profile rally of the day, in Warren, MI.

Sanders played a major role in organizing the Obamacare rallies, sending out information about the events to the massive email list he gathered over the course of the 2016 campaign.

"The goal is to rally the American people against a disastrous Republican proposal," Sanders told NPR.

He's hoping the rallies are the first step toward an "outside-the-beltway" communication strategy that could help Democrats cut into President-elect Donald Trump's powerful ability to set the daily political agenda.

Since Congress came back earlier this month, Minority Leader Chuck Schumer and other Democratic leaders have been pushing back against Republican proposals by doing what they normally do: holding big press conferences, doing TV interviews, and making the most of their time on the Senate floor.

Earlier this week, Senate Democrats talked late into the night about all the good they say Obamacare has done.

And when the Senate voted to take the first step toward an Obamacare repeal early Thursday morning, many Democrats broke Senate rules by trying to explain their "no" votes as they cast them.

This is the typical minority party playbook.

But it's much harder to break through all the noise in an era where President-elect Trump can basically reprogram cable news with a single tweet. Schumer is trying to get Senate Democrats more engaged on social media.

But no one else in Washington has been able to dominate it like Trump.

This clearly frustrates Sanders. He wants Democrats to reimagine how they get their message out, beyond floor speeches and press conferences. "How do you mobilize millions of people," he asked, "and get them to understand that the Republicans are doing exactly the opposite of what the American people want?"

That's what this Michigan event and all of today's other rallies are all about.

Sanders tapped the massive email list he put together during his primary campaign, blasting out messages about the Michigan rally, and similar events across the country.

He and Schumer will be trying to make their case in a state where Democrats typically did well with working-class voters — but faltered badly in 2016. "There are many parts of the country that I could have gone to," Sanders said. "But Michigan is a great state. It's a state where I did well in the Democratic primary. And is a state where Trump won."

Democrats are now out of power at pretty much every level of government. Party leaders are trying to figure out their strategy. But so are grassroots activists.

One place many liberals are turning — an online guide called Indivisible. It's basically a manual --- written by former Democratic Congressional staffers — that lays out ways that Democrats could use Tea Party tactics to fight Trump.

Ezra Levin, who helped write the document, said the Tea Party did one thing very effectively. "If they were in Texas, they didn't call members of Congress in California," Levin said. "They knew that they were constituents of people who had a voice in Washington. And they focused on their two Senators, and their representative."

That's what this guide recommends to Democrats trying to figure out how to organize. It offers practical tips like, how to effectively call a lawmakers' office, or how to best pressure a representative during a town hall.

Levin said he wants readers to understand that it's really easy for people to become politically active. "This means getting a handful of your friends together, or joining an existing group. And just getting out there on a regular basis, at district offices or at member events. Or just making calls," he said.

That kind of grassroots spirit is what lifted Sanders' surprising presidential campaign. It also got President Obama all the way to the White House. But when Obama tried to use his campaign apparatus and email lists to mobilize supporters in legislative fights, he had a mixed record.

Now Sanders is trying to do the same thing.

Today's rallies will be the first test of how much momentum he still has.