Accessibility links
Pardon Sought For Oscar López Rivera, Prisoner Who Fought For Puerto Rican Independence There are calls for President Obama to pardon Oscar López Rivera, who was jailed in connection to a series of bombings by a radical nationalist group. But to some, he's still an unrepentant terrorist. 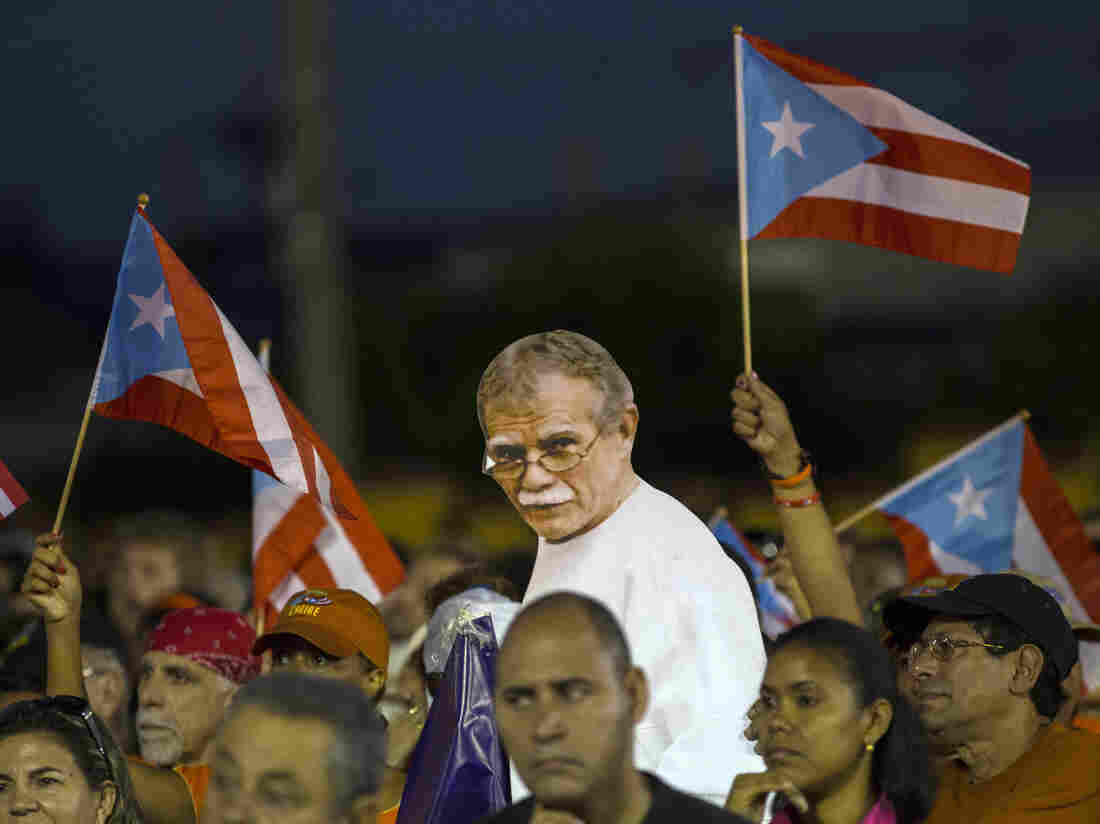 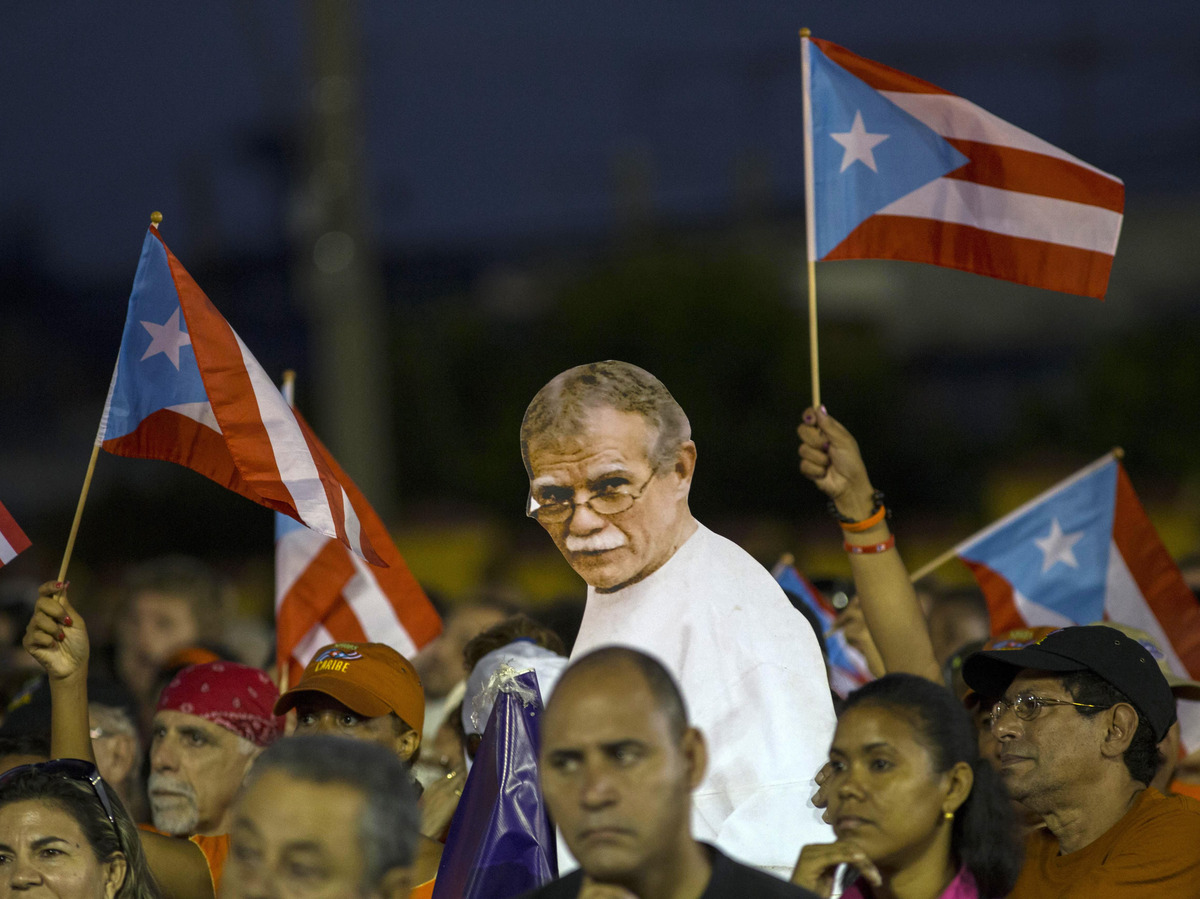 Celebrities, politicians and activists, ranging from Bernie Sanders to Hamilton creator Lin Manuel Miranda and Archbishop Desmond Tutu, are asking President Obama to grant clemency to a man who was part of a militant group that fought for Puerto Rican independence.

Oscar López Rivera has been in federal prison since 1981, convicted for "seditious conspiracy" to overthrow the the government of the United States, in relation to his membership in the Fuerzas Armadas de Liberación Nacional, or FALN. Between 1974 and 1983, the FALN claimed responsibility for more than 70 bombings in New York, Chicago and Washington, D.C. The bombings caused millions in property damage, dozens of injuries and five deaths.

López Rivera's supporters say he is a political prisoner serving an unjust sentence. His opponents say he is an unrepentant terrorist.

Born in Puerto Rico, López Rivera moved to Chicago's Humboldt Park neighborhood as a teenager. He fought in Vietnam, where he earned the Bronze Star, but became disillusioned by the war and what he saw as U.S. imperialism.

After the war, López Rivera worked as a community organizer in Chicago. He also became involved in activism around the cause of Puerto Rican independence. The more he researched Puerto Rican history, the more he became convinced that Puerto Rico was a colony of the United States.

"There were resolutions of the United Nations pointing out very, very clearly that colonialism was a crime against humanity and that colonized people have the right to self-determination and to independence and to achieve it by any means necessary — including the use of force," López Rivera said in an October telephone interview from the federal prison in Terre Haute, Ind.

At some point in the 1970s, López Rivera became a member of the clandestine FALN. The group set off bombs at government and corporate buildings, and left communiques in phone booths calling for a "free and socialist Puerto Rico." The majority of the bombs damaged property without causing injuries or deaths, but not all of them.

The FALN's most deadly attack was in January 1975 — the bombing of a crowded restaurant in New York's financial district called Fraunces Tavern. The bomb killed four and injured 60, leaving law enforcement scrambling to find the perpetrators.

"It was truly the first truly clandestine terror organization that we confronted and we had no clue as to how to approach this," said Rick Hahn, a former FBI agent assigned to the FALN case. "They were very sophisticated and we didn't realize it, and I think that was part of the problem we had in identifying FALN members — false hair items, reversible clothing ... professional make-up kits, that sort of thing."

By then, police had also arrested 11 other members of the group. López Rivera was tried under what was then a rarely used statute, "seditious conspiracy," which means "to oppose and attempt to overthrow by force the power of the United States government," among other crimes.

He was sentenced to 55 years, and later given an additional 15 after being convicted for a conspiracy to escape.

In 1999, President Clinton offered to commute the sentences of most of the imprisoned FALN members — 16 in all. López Rivera was offered a deal, but he refused it because, he says, not all of his co-defendants were included.

Now, supporters like Democratic Congressman Luis Gutierrez of Illinois are hoping Obama will use his pardon powers to let López Rivera go.

"I have never been an advocate of violence in order to meet your goals, but I also am a person who believes in justice and in fairness. He wasn't indicted for murder, " Gutierrez says. "I can only deal in the realm of what a person was indicted for and convicted and, based on that, he should be able to come home."

His supporters often compare him to Nelson Mandela, who was also involved in an armed political movement and served a lengthy prison term. But not everyone agrees.

"I would love to ask people who support his release and say, If not a terrorist, what has Oscar López done to help the Puerto Rican people?" said Joe Connor, who was 9 years old when his father — a 33-year-old banker at J.P. Morgan — was killed in the Fraunces Tavern bombing. "I'm hearing he's a freedom fighter, he's done all these things, he's not violent. But what did he do, if not be a terrorist? There's no answer to it because he was a terrorist."

Connor says López Rivera does not deserve clemency because he hasn't expressed remorse for his actions or the deaths caused by the FALN. The Fraunces Tavern bombing case has never been solved. López Rivera has denied involvement in its execution or planning.

A petition to release López Rivera has over 100,000 signatures, but organizers say they've gotten no indications from President Obama. In the official response to the petition, the White House said it "does not comment on individual pardon applications."

López Rivera had said he will no longer condone violence in the struggle for Puerto Rican independence. But he says if he walks out of prison one day, he'll walk out with his head high.

"I had made a decision ... dealing with finding meaning and purposing life, and not living a life just to exist, you know. And the struggle for me is where I found meaning in life, and I knew that that would keep me strong, and it has," he said.

If Obama leaves him in prison, López Rivera is projected for release in 2023 — when he'll be 80 years old.

This story was produced by NPR's Latino USA, who will be releasing an hour-long audio documentary about Oscar López Rivera later this month.