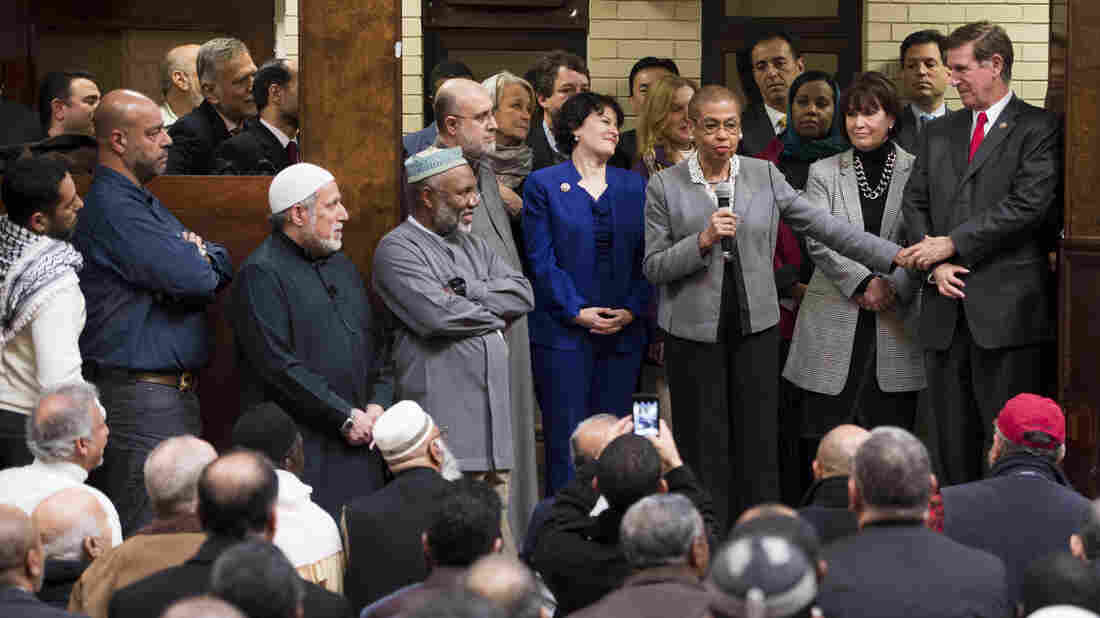 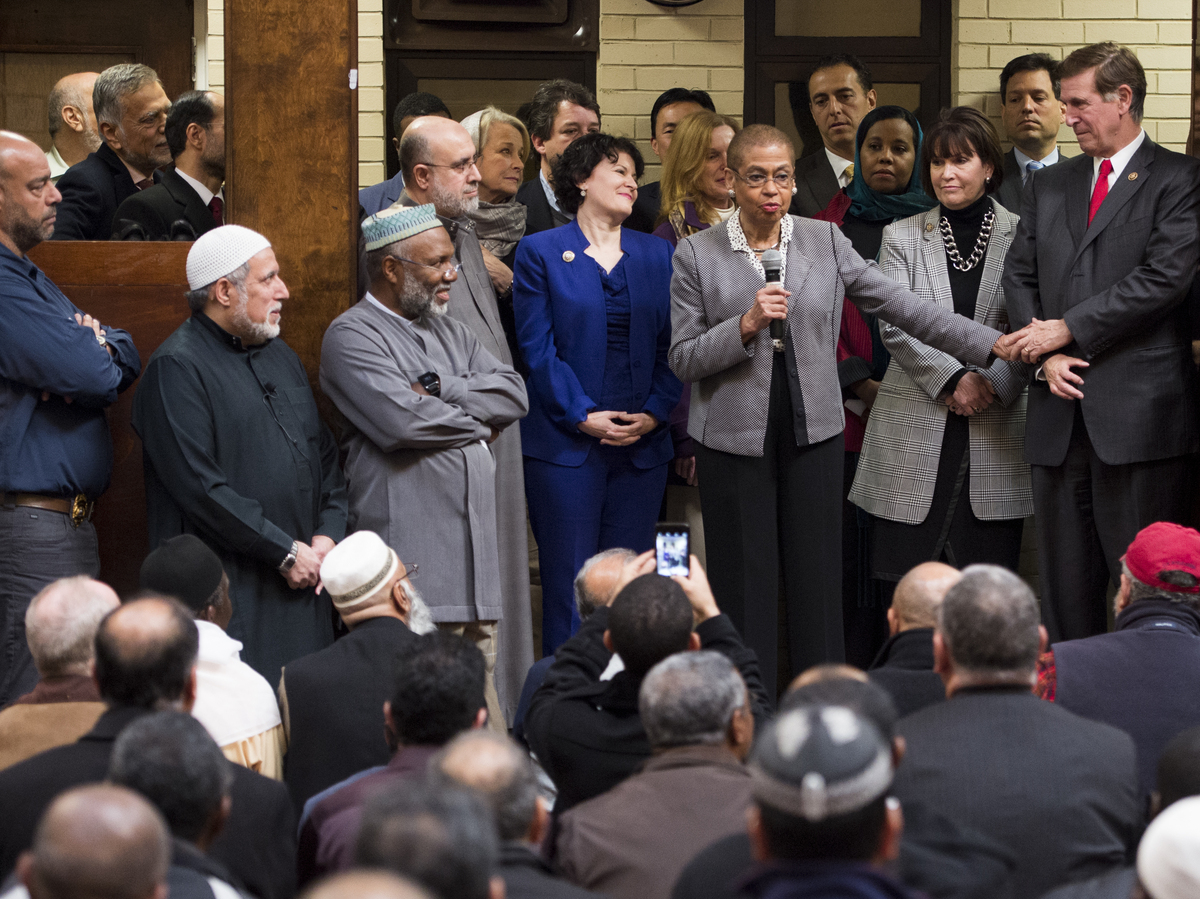 Democratic members of Congress address the worshipers at the Dar al-Hijrah Islamic Center after Friday prayers on Dec. 4 in Falls Church, Va.

The Dar al-Hijrah mosque in Northern Virginia has seen its share of attention. Two of the hijackers in the Sept. 11 attacks prayed there, and jihadi propagandist Anwar al-Awlaki served as an imam at the mosque before heading off to Yemen to join al-Qaida.

Now, with a U.S. president-elect who has suggested he will take a hard line with Muslim-Americans, the worshipers at Dar al-Hijrah again are bracing for scrutiny and looking for reassurance.

"For anyone who feels anxiety about the current political crisis and what you hear in the public discourse, I am completely confident," Imam Johari Abdul-Malik told the men and women assembled at the mosque last week for Friday prayers. "Not only will Islam survive, but it will thrive."

The worshipers are a diverse group, including security guards, housewives, doctors and educators. Most are immigrants — Dar al-Hijrah means "place of migration" in Arabic — and between them they speak 37 languages.

Many fear they will no longer be welcome in America with Donald Trump as president.

"It's a concern," says Wadi Adam Lahrim, who immigrated from Morocco to the United States with his parents as a child 30 years ago. "We have a new president who has the support of a lot of people who are not very friendly to the Muslim community."

In his sermon, Abdul-Malik reminded worshipers that many of them had immigrated to the United States from countries where Islam is under far greater pressure.

"Many of the people here grew up under dictatorship," he said. "We had a woman here the other week. She said: 'Imam, I grew up in Albania, where they outlawed the practice of Islam. There was no freedom of religion under the communists. We had to go in our houses and hide, so we could pray.' "

In the months after the Sept. 11 attacks, Dar al-Hijrah was visited often by law enforcement officials, and the monitoring led to conflict. In the years since, however, the mosque leadership has worked closely with law enforcement agencies.

As his guest Friday, Abdul-Malik brought along FBI Agent Paul Abbate, head of the bureau's Washington, D.C., field office, to assure the worshipers that his agency was determined to treat Muslim-Americans fairly.

"The essence of our mission to is keep people safe, to keep all of you safe — your loved ones, your families, [and] the communities that we serve," Abbate said, "And we do that fairly and equally for everyone, under the Constitution of the United States."

What It's Like To Be An American Muslim After Trump's Election

What It's Like To Be An American Muslim After Trump's Election

But Muslim-Americans have heard a more hostile message from President-elect Trump, who last March told an interviewer from CNN, "I think Islam hates us," and who had proposed a complete ban on all Muslim immigration to the United States.

Trump backed off that plan, and Muslim-American leaders are trying to determine whether Trump's more incendiary statements were just campaign rhetoric. Last week they closely followed the testimony of Trump's cabinet picks during their confirmation hearings, eager to see whether a Trump administration would require all U.S. Muslims to register with the federal government.

Retired Marine Gen. John Kelly, Trump's choice to lead the Department of Homeland Security, said he was against a Muslim registry, as did Alabama Sen. Jeff Sessions, set to be attorney general under Trump.

Sessions, however, said he did think someone's religious beliefs, not just their actions, should be considered in the decision whether to let them enter the United States. In December 2015, Sessions opposed a nonbinding resolution that declared there should be no litmus test for people seeking to enter the United States, and he reaffirmed that position during his confirmation testimony.

"Many people do have religious views that are inimical to the public safety of the United States," Sessions said.

As president-elect, Trump has continued to advocate a policy of "extreme vetting" of potential immigrants, to screen out those, such as radicalized Muslims, who might be perceived as a security threat.

Whether he effectively could implement such a policy through executive action is unclear. Under a 1990 law, immigrants can't be barred from the United States on ideological grounds, but another law allows the president to keep out any "class" of people he considers "detrimental to the interests of the United States."

"The president conceivably could interpret existing statutes in such a way as to allow [extreme vetting]," says Mark Krikorian, executive director of the Center for Immigration Studies. "[He could] direct his subordinates to keep out anyone who is a member of this class of persons — which is to say people who think it's OK to chop people's heads off and throw gays off of buildings — even though they have not engaged in that activity themselves."

Defining a "class" of people on the basis of their beliefs would not be easy, and almost certainly would be challenged by some in Congress and by the courts.

The threat of such a policy alarms many Muslim-Americans.

"It is extremely important to us that this place is safe," says Wadi Adam Lahrim, who has three children, ages 7, 11 and 12. "We would like the rest of the U.S. to understand us. Just as we took the time to learn your language, your culture, and to understand you and be able to work with you and live with you, I hope that some folks in America will take the time also to understand us and get to know us, rather than hate us."