Accessibility links
Watch A Trippy Video For The Spirit Of The Beehive's 'Ricky (Caught Me Tryin')' With a woozy hook that's as dissonant as it is catchy, the Philadelphia band's new song mixes the pretty with the messy.

Songs We Love: The Spirit Of The Beehive, 'Ricky (Caught Me Tryin')'

The Spirit Of The Beehive's new song, "Ricky (Caught Me Tryin')," opens abruptly, with a seasick melody that tipsily sways up and down in half-step motions and forms a hook as dissonant as it is catchy. As Zack Schwartz sings, "Now I live alone in rose-colored walls, just waiting for the call," he's backed by slack-stringed strumming and a crisp electric guitar that imitates each laconic vocal phrase right back at him — the way your younger sibling might snottily mimic everything you say from the backseat of the family car. Even amid the rising vocal harmonies and scuffed-up distortion, that singsongy melody will affix itself to your brain. 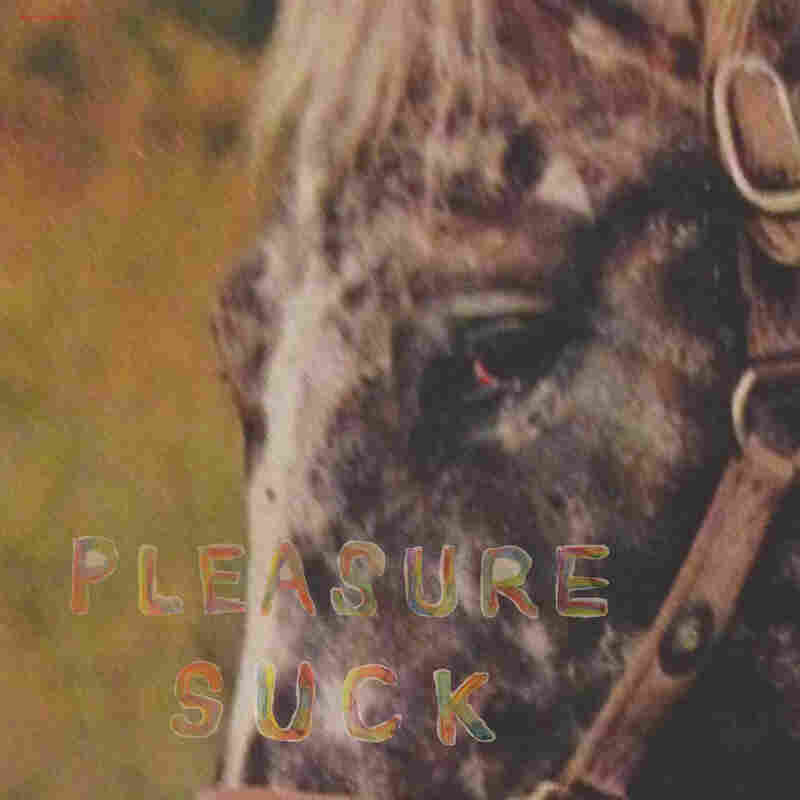 The Spirit Of The Beehive's Pleasure Suck comes out March 24 via Tiny Engines. Courtesy of the artist hide caption

The song, from The Spirit Of The Beehive's forthcoming album, Pleasure Suck, is emblematic of what the Philadelphia band does so well. Like the classic 1973 Victor Erice film that shares and likely inspired its name, The Spirit Of The Beehive has a way of juxtaposing the pretty with the messy, making taut songs that feel a little off-axis, with sudden, jagged-edged outbursts that come when you least expect them. It's an appealing, loose formula that band members Schwartz, Rivka Ravede, Phil Warner and Pat Conaboy explored on their 2015 EP You Are Arrived (But You've Been Cheated) and that has been further unleashed on Pleasure Suck.

"Ricky (Caught Me Tryin')" alternates somewhat obliquely between anxiety and depression ("Ricky caught me tryin' to get myself well / But I could never") and listless indecision about the future: "You don't need a education, you can write / You don't need to go to college / It's only in your mind, just tell us where to sign," Schwartz sings. In an email to NPR, Schwartz explains that he wrote the song after being approached by a label last year: "It's a fictional account of success after signing a record deal and then losing it all, told in reverse, lyrically." That theme coalesces around the chant "Maybe the money will save us all," a foolishly hopeful line re-dressed as a shrugging, nihilistic stinger, just before giving way to a coda of sweetly chiming keys and a simple drum-machine beat.

"Ricky (Caught Me Trying)" arrives coupled with a music video by Nnamdi Ogbonnaya that fits the The Spirit Of The Beehive's scrappy M.O. The freaky, animated-collage video crosses many aesthetics — comic zines and homemade punk posters, Lisa Frank-styled Trapper Keepers and Molly Soda-infused GIF art — and depicts a grotesque creature with bulging eyes, octopus-tentacle hair and a surreal and hilarious mishmash of objects. (Look for the hippo lasers and cell phone rainbows – and, wait, are those flying lasagnas?) Amid all the bonkers images flashing on the screen, we actually gain a little sympathy for the character's isolation – and, more than that, an admiration for the The Spirit Of The Beehive's imaginative melding of lyrics and visuals.