Accessibility links
Book Review: 'Homesick For Another World,' By Ottessa Moshfegh The characters in Ottessa Moshfegh's new collection are cold, unfiltered, frequently pathetic — all suffering from unease and nameless longing, made understandable by each perfectly-built story. 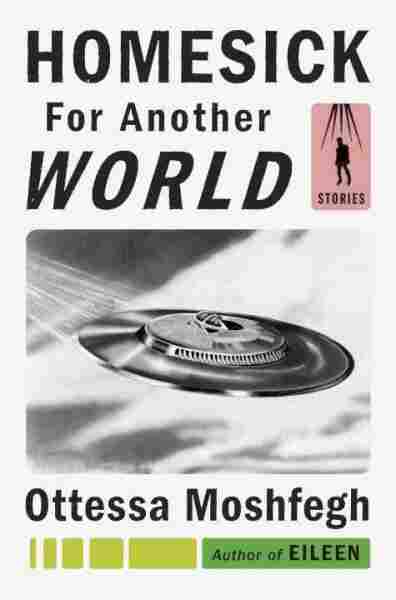 Homesick for Another World

It's become a common joke that the Germans have a word for everything (and that many of them are comically long and impossible to pronounce). But there's a grain of truth to it — take Sehnsucht, a German term that's hard to explain in English. It's sometimes translated as "longing," but it carries a series of specific connotations, among them, a yearning for a faraway land that may or may not actually exist.

Sehnsucht is a familiar feeling to the characters in Ottessa Moshfegh's stunning short story collection, Homesick for Another World. The men and women in Moshfegh's stories are desperate, although they're unsure for what. They're lonely and dissatisfied, uneasy riders on the edge of self-awareness. As one of them puts it, "Life can be strange sometimes, and knowing it can be doesn't seem to make it any less so."

Many authors like their characters to play coy, to circumlocute their way around their motives and desires. Moshfegh doesn't like to play this game. Her characters are largely blunt and unfiltered; you don't have to guess what they're really thinking.

Take the narrator of "Bettering Myself," a 30-year-old divorced Catholic school teacher who drinks to try to forget about a job she dislikes and an ex-husband she's not quite over. "My students were all horrible at math," she complains. "I got stuck with the dummies." The end of the story finds her contemplating making a move, a change, but she finds herself unable to do it, preferring to stick with the dissatisfaction that she knows.

Similarly feckless is the narrator of "Malibu," an unemployed bulimic man whose only regular contact is his ailing uncle, who has his own issues: "All he did was watch TV or talk on the phone or eat. ... I'm not saying he was an idiot. He was just like me: anything good made him want to die. That's a characteristic some smart people have."

The narrator is certain he's smart and attractive, despite some pretty convincing evidence to the contrary. He's clumsy and delusional, but Moshfegh somehow makes him — not likable, exactly, but understandable. That's one of the reasons her stories work so well: She takes her characters on their own terms, without judgment, letting them account for themselves, or not.

And she does so even when her characters, rather than being paralyzed by their indecisiveness, are facing the consequences of a rash choice they've made. In "The Beach Boy," one of the book's most chilling and beautiful stories, a doctor laments the predictability of his admittedly nice life with his wife: "His own struggles seemed like petty complications, meaningless snags in the dull itinerary that was his life. Why couldn't he live by instinct and appetite, be primitive, be free?"

There's not a story in 'Homesick for Another World' that's anything less than original and perfectly constructed.

When the doctor's wife dies unexpectedly, he becomes rudderless, until he finds what he thinks is evidence that she cheated on him with a young male prostitute. Determined to get some kind of revenge on her, he decides he'll do the same thing, although it doesn't work out the way he expects. The end of the story is heartbreaking, with the doctor emotionally destroyed, far from home.

The collection ends, fittingly, with "A Better Place," a chilling, twisted fairy tale about twin siblings convinced they're not from here: "I come from some other place. It's not like a real place on Earth or something I could point to on a map, if I even had a map of this other place, which I don't," the sister muses. "It's not somewhere or anywhere, but it's not nowhere either. There is no where about it. I don't know what it is. But it certainly isn't this place, here on Earth, with all you silly people."

The only way to return, the brother and sister agree, is to die or to kill the right person. The sister, armed with poison and a knife, is determined to put her plan into action by murdering a man who assaults young girls. The story ends where it has to, leaving the reader chilled to the bone.

There's not a story in Homesick for Another World that's anything less than original and perfectly constructed. Moshfegh's talent is unique, and her characters — unfiltered, cold, frequently pathetic — are all the more memorable for their faults and obliviousness. Anyone who's experienced the special kind of homesickness that lacks a home will find something to relate to in Moshfegh's unsettling, sharp stories.