Accessibility links
The Slants Take Trademark Battle Over Band Name To The Supreme Court The Patent and Trademark Office denied registration to an Asian-American rock band named The Slants; the musicians say they want to re-appropriate the term. The case hits the high court on Wednesday. 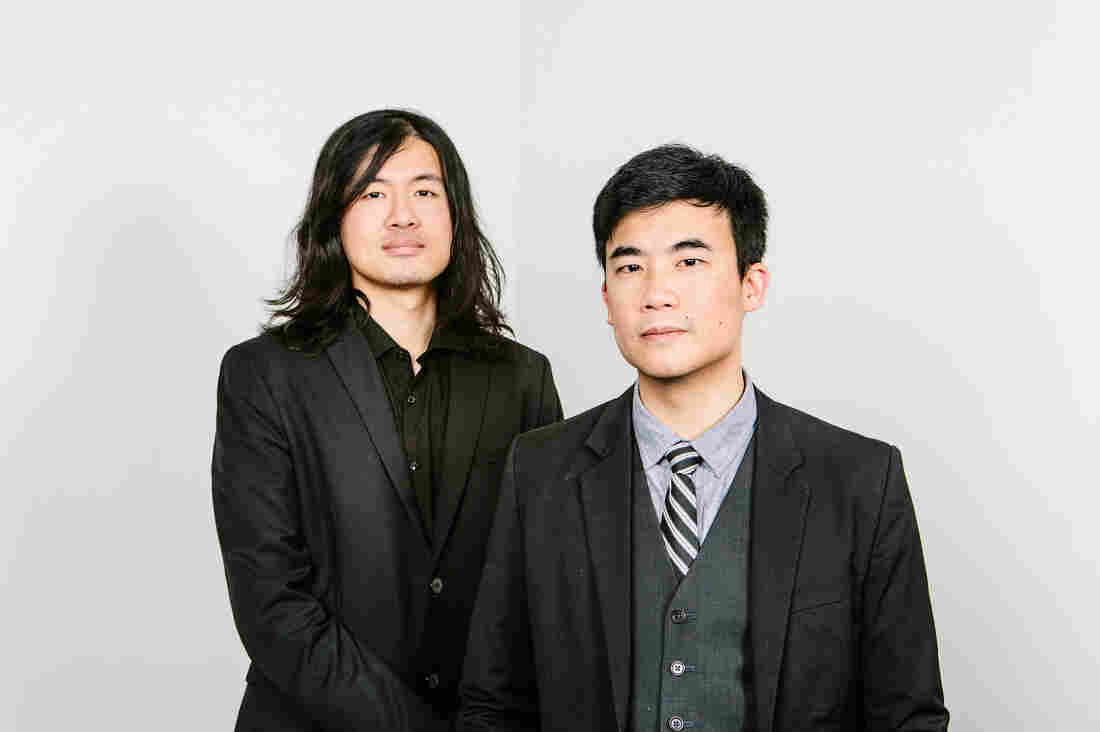 Joe Jiang (left) and Simon Tam of The Slants are in a legal battle at the Supreme Court over their band's name. Ariel Zambelich/NPR hide caption 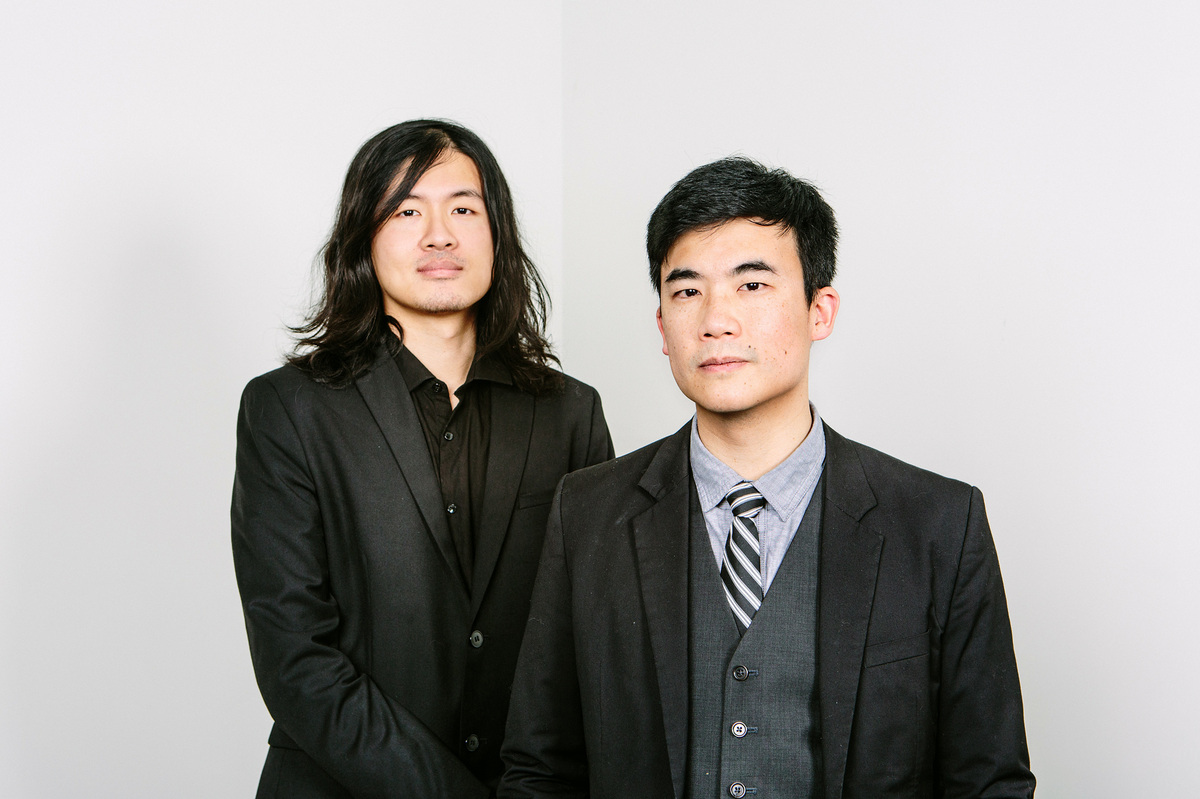 Joe Jiang (left) and Simon Tam of The Slants are in a legal battle at the Supreme Court over their band's name.

What do the McDonald's golden arches, the apple on your iPhone, the NBC peacock, the Nike swoosh and the MGM lion have in common?

They are all registered trademarks, and in the last 20 years, the U.S. Patent and Trademark Office has approved roughly 4 million of them. Now the system is under review at the U.S. Supreme Court, where a rock band called The Slants is challenging the trademark office's refusal to register its name.

The purpose of trademarks is to protect consumers so that when you buy, for example, a truck with a Ford logo on it, you know it's a Ford; it's to help businesses protect their ownership rights, and to facilitate the smooth flow of commerce across the country and internationally.

The Slants picked the name precisely because it is seen as offensive. The Asian-American musicians wanted to turn the phrase "upside down," says bass player and frontman Simon Tam, to "re-appropriate it into something positive and empowering."

There is nothing to stop The Slants from trademarking their group. But when the band members went to get the extra protections afforded by registering the name with the U.S. Patent and Trademark Office, they were turned down under a section of the 1946 Lanham Act, a federal law that bars registration of trademarks that "disparage" or "bring into contempt or disrepute" persons, institutions, beliefs or national symbols.

Thus, for example, the trademark office has denied registration to a group calling itself "Abort the Republicans," and another called "Democrats Shouldn't Breed." It canceled the registration for the Washington Redskins in 2014 at the behest of some Native Americans who considered the name offensive.

But while the Washington football team will survive regardless, The Slants say they really need the registration.

"If you want a record label deal, they won't sign you unless you have a registered trademark," Tam says.

The band points to lots of other registered names that are viewed by some as offensive — like N.W.A, the name of a hip-hop group that stands for "Niggaz Wit Attitudes."

So the Slants went to court, contending that the denial of trademark registration violated their free-speech rights.

The government "doesn't get to decide what's a slur," says Ilya Shapiro of the Cato Institute, who filed a brief in the Supreme Court siding with The Slants. "It shouldn't be the government that makes that call."

The government counters that it is not doing anything to stop the band members from speaking, or calling themselves anything they want. But, as the government sees it, if it's going to give its imprimatur to a name, the law appropriately forbids disparagement.

Otherwise the federal government would be required to register, publish and transmit to foreign countries marks containing crude references to women's anatomy, repellent racial slurs, white supremacist slogans and demeaning illustrations of the Prophet Muhammad and other religious figures.

The Slants' supporters have a different view.

"Surely it is not the case that the government endorses every trademark that it registers," Shapiro says.

"There are a lot of registered trademarks which no one would expect the government to have endorsed, such as "Take Yo Panties Off" or "Capitalism Sucks Donkey Balls." And these are some of the tamer ones," he says with a wry smile.

Georgetown Law professor Rebecca Tushnet replies that once the government creates a program, it usually is allowed a fair amount of control over it.

Indeed, the government points to other Supreme Court decisions that have upheld similar programs, such as the ban on discussions about abortion in programs that receive government grants, or the 2015 decision upholding the Texas ban on specialty license plates deemed offensive by the state.

But Cato's Shapiro maintains the trademark registration case is different because the government is not providing any subsidy.

Moreover, he contends, the trademark disparagement provision is unconstitutionally vague — with insufficient criteria.

"Vagueness means that a law doesn't give enough instruction to citizens on how to follow the law," Shapiro says. "What is disparaging? It depends on the particular trademark examiner you get, or the particular judge."

Tushnet replies that in a program with 500,000 applications for trademark registration each year, there will inevitably be some inconsistencies, just as there are in the judgments made under the other parts of the law. In each case, she observes, if you get turned down for a trademark registration, you can appeal within the agency. If you lose there, you can go to court.

But she adds that the trademark registration system has served the nation well.

"It's a complex system, and if you pull out a chunk of it without extreme care, you're going to upset the rest of the system."

And that, she says, could put the whole trademark system in jeopardy.

As for The Slants, the band is enjoying its current legal fame, but its members hope to refocus.