Accessibility links
Supreme Court Considers Trademark Battle Over Band Name The Supreme Court tests whether the Patent and Trademark Office violated the First Amendment when it refused to register the "disparaging" band name, "The Slants." 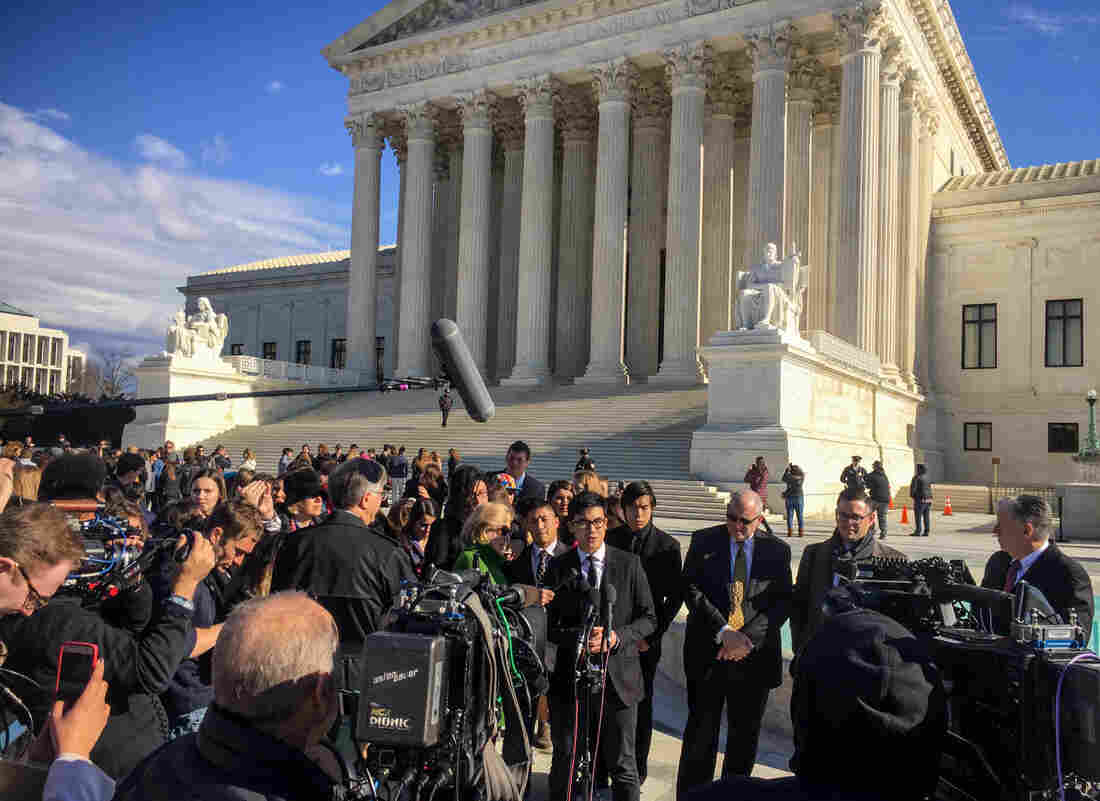 Simon Tam, a member of the band The Slants, speaks to reporters outside the Supreme Court on Wednesday. Lauren Russell/NPR hide caption 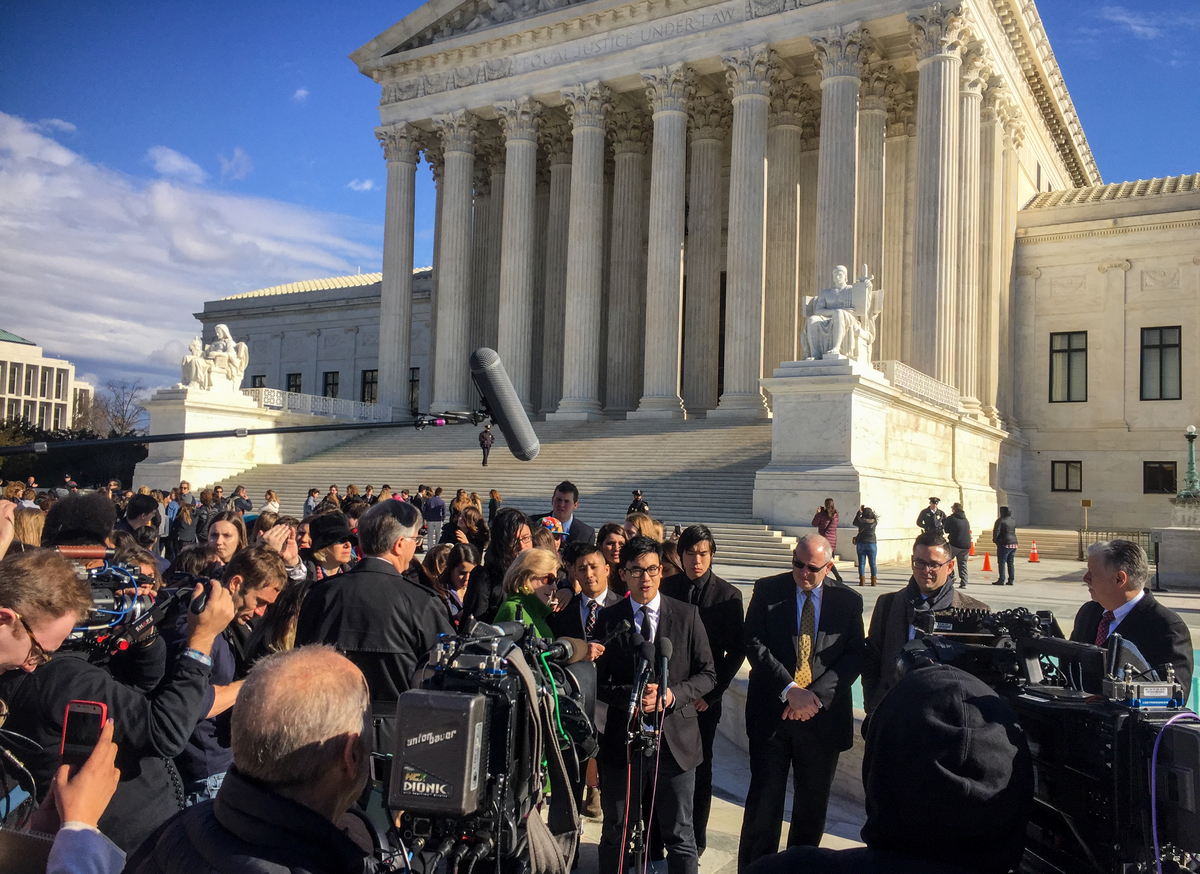 Simon Tam, a member of the band The Slants, speaks to reporters outside the Supreme Court on Wednesday.

Rarely have U.S. Supreme Court arguments been more schizophrenic than they were on Wednesday.

The justices were hearing a challenge to the 1946 trademark law barring the federal registration of trademarks that "disparage" groups and individuals. The challenge was brought by an Asian-American rock group called, "The Slants."

The band members acknowledge that the name they picked for their group is seen as offensive and racist by many Asian-Americans, but they say they are seeking to reclaim the term and make it something positive.

"We fought this case for nearly eight years now, because we want to prevent the government from discriminating based on viewpoint," said bass player Simon Tam.

The government counters that there is nothing in the law that prevents The Slants from speaking out through their music. Indeed, The Slants are entitled to trademark their name, but when it comes to getting the extra protections afforded by registering the name with the U.S. Patent and Trademark Office, the law bars registering such racial slurs. 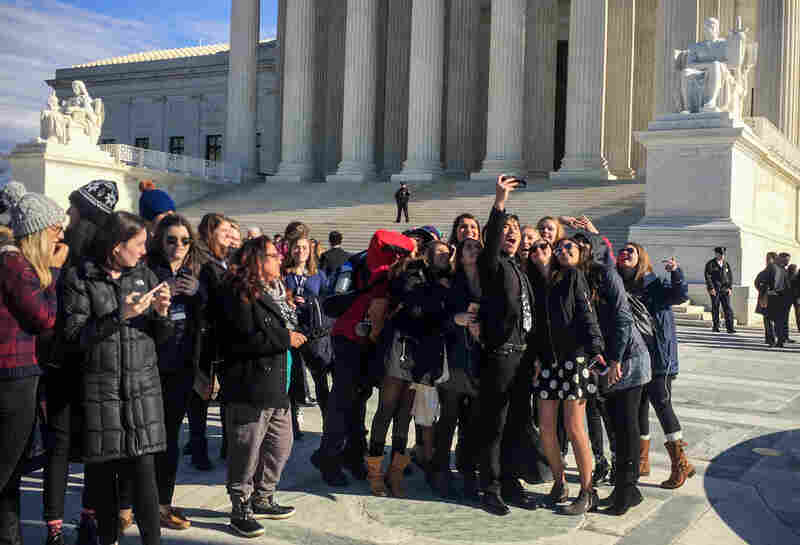 Ken Shima, singer of The Slants, takes a selfie with fans outside of the Supreme Court on Wednesday. Lauren Russell/NPR hide caption

Oral argument was fast and furious, with almost all the justices--liberal and conservative--beating up both sides ferociously.

Defending the law, Deputy Solicitor General Malcolm Stewart argued that Congress reasonably put a limit on what kinds of names the government should give its imprimatur to in the form of a trademark registration that is published throughout the world.

Justice Anthony Kennedy pushed back, asserting that the government seems "to ignore the fact that we have a culture in which we have T-shirts and logos and rock bands and so forth that are expressing a point of view."

Justice Stephen Breyer summarized the government's argument this way: "You can say something nice about a minority group, but you can't say something bad about them."

The government's Stewart replied that the function of a trademark is to tell the public the source of the goods or services. "It is not expressive in its own right," he said.

And while most trademarks seek in some way to advertise or promote, Congress justifiably barred disparaging marks--for instance, a soft drink manufacturer couldn't trademark a drink called "Coke Stinks," he said.

It's not that simple, replied Stewart. Here, Congress reasonably barred registering disparaging trademarks in the same way that a public university might set aside a room for students to post messages, as long as those messages contain no racial epithets or personal attacks.

"So, the government is the omnipresent schoolteacher... Is that what you are saying!" Kennedy asked caustically.

What if this band were non-Asians, wore make-up "to exaggerate slanted eyes," and "made fun of Asians," Kennedy posited. "Could the government, under a properly-drawn statute, decline to register that as a trademark in your view?"

"They could not," replied Connell.

Connell's answer: "That is correct."

Justice Sonia Sotomayor interjected that in this case, The Slants are essentially asking the government to "endorse" their name even though the band is not being "burdened in any traditional way."

Breyer asked Connell if he believed the government could deny registration to trademarks saying, "Joe Jones is a jerk.'"

Connell said the government could not.

Could they stop a trademark that says, "Smith's beer is poison?" Breyer asked incredulously.

"They could not," replied Connell.

"Oh, my goodness," exclaimed Breyer. "There are laws all over the place that stop you from saying that."

Justice Ruth Bader Ginsburg asked if the government could refuse to register a trademark using one of George Carlin's infamous "seven dirty words."

No, replied Connell. "That would be a burden on speech."

But Ginsburg noted pointedly that the Supreme Court itself had said it was "okay to ban those words from the airwaves."

Justice Sotomayor probed further to see if there were limits to The Slants' position.

Supposing someone registers the trademark, "Trump is a thief," and then Trump's lawyers go to court and prove that is "a libel or a slander," is it your position, she asked, that the trademark "would still exist" and could be used "because cancelling it would be an abridgement of the First Amendment?"

Responding to a question from Justice Samuel Alito, Connell said the expressive and commercial aspects of the trademark are "intertwined."

But Alito was doubtful.

"Does that mean that viewpoint discrimination is always prohibited in commercial speech?" he asked. Wouldn't that mean that the government could not bar cigarette manufacturers from placing a message on their packages saying, "Great for your health. Don't believe the Surgeon General"?

Lawyer Connell replied that "viewpoint discrimination is prohibited in commercial speech, no question," an answer that would seem to suggest that decades of regulation on cigarette labeling would be unconstitutional.

The question is, did the first half represent reality and the second half devil's advocacy? Or the reverse? Most observers seemed to think the former, but in truth Wednesday's tea leaves were pretty hard to read.