'Martians Abroad' Is An Optimistic Glance Into Humanity's Future

'Martians Abroad' Is An Optimistic Glance Into Humanity's Future

Mars has been on a lot of minds lately. The success of Andy Weir's science fiction novel The Martian — and Ridley Scott's subsequent film — helped rekindle interest in the Red Planet. And now, National Geographic's TV series Mars is going even further in giving us a plausible look at what a Martian colony in the near future might look like. 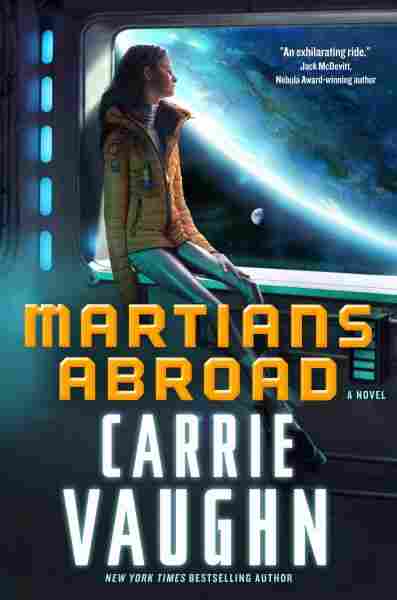 It's perfect timing, then, for the publication of Martians Abroad. The novel is the latest from New York Times bestselling author Carrie Vaughn, best known for her Kitty Norville urban fantasy series. But rather than involving werewolves in modern-day America, Martians Abroad sets its sights on the human-colonized solar system of tomorrow.

That said, most of Martians Abroad — as the title states — doesn't take place on Mars at all. The majority of the action takes place on Earth. Polly Newton is a typical teenager — that is, a typical teenager living on Mars' Colony One, where her mother is the director of operations. She sends Polly and her twin brother Charles to Earth to attend Galileo Academy, a prestigious school full of the scions of the most powerful families in the solar system. Polly and Charles are the first Martians to enroll at Galileo, partly because Mars is less wealthy and seen as a bit of a hick planet. (Not that Polly wants to go to Earth in the first place — she's forced to abandon an upcoming internship as a starship pilot, something she desires more than anything.)

Polly's reluctance turns to ambivalence after she and her cliquish classmates — with whom she has plenty of friction — have to defend themselves against mysterious peril at Galileo. A conspiracy is afoot at the school, and Polly and her peers are the target.

It's a setup familiar to any Harry Potter fan, but Vaughn keeps the intrigue at a leisurely simmer, giving Polly enough space to gradually cope with the travails of a new planet. Born and raised on Mars, her body is thin and frail compared to the muscular Earth kids who are accustomed to three times the gravity she's used to. And another kind of gravity starts to bear on her: the responsibilities of becoming a good student, a good sister, and ultimately, a good leader.

Despite being mostly set on Earth, Martians Abroad offers plenty of particulars about the potential for living on Mars in the future. In lavish, well researched detail, Vaughn paints a vivid portrait of technological advances and pioneering spirit.

What she doesn't do is slather her vision in grit. Countering the current trend of dystopian science fiction, Martians Abroad is hopeful, thoughtful, and fun. Polly's universe isn't a perfect one, but neither does Vaughn feel the need to put her into the most miserable situation imaginable; the action, like the angst, is predominantly light. Even when Polly dreads going to Earth, which she assumes will be "old, grubby, crowded, archaic, backward, stifling," she strives to adapt and make the best of her situation. And the feminist overtones of the story are subtly handled. She's surrounded by a futuristic society full of confident, capable women — whom she desperately wants to emulate.

Martians Abroad is a refreshingly optimistic change of pace, but it makes no secret about its precedents. It's an open homage to Robert Heinlein's juveniles, as his novels with adolescent protagonists were called — and one of those juveniles in particular, 1963's Podkayne of Mars. The parallels are numerous. Heinlein's heroine goes by the nickname Poddy. Her brother's name is Clark. And they're both sent abroad from their Martian home.

It's this loving, retro-futuristic vibe that helps make Martians Abroad so endearing. Harking back to a more innocent time — but without downplaying the tribulations of contemporary adolescence — Vaughn has crafted a tribute to the power of science fiction, evoking a giddy sense of wonder and adventure about space exploration, technology, and human ingenuity. And, yes, even about being young.