Accessibility links
'The Red Turtle': An Animated Fable Of Humanity, Nature And The Nature Of Humanity In this wordless film, a man stranded on a tropical island struggles against the forces of nature to leave — until those same forces provide a reason to stay. 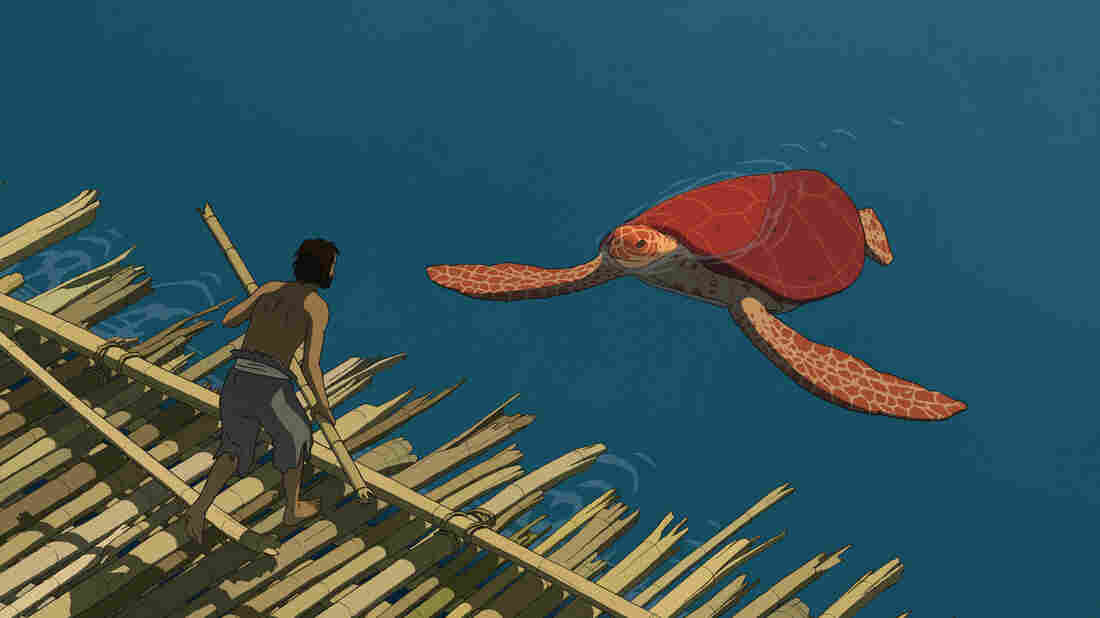 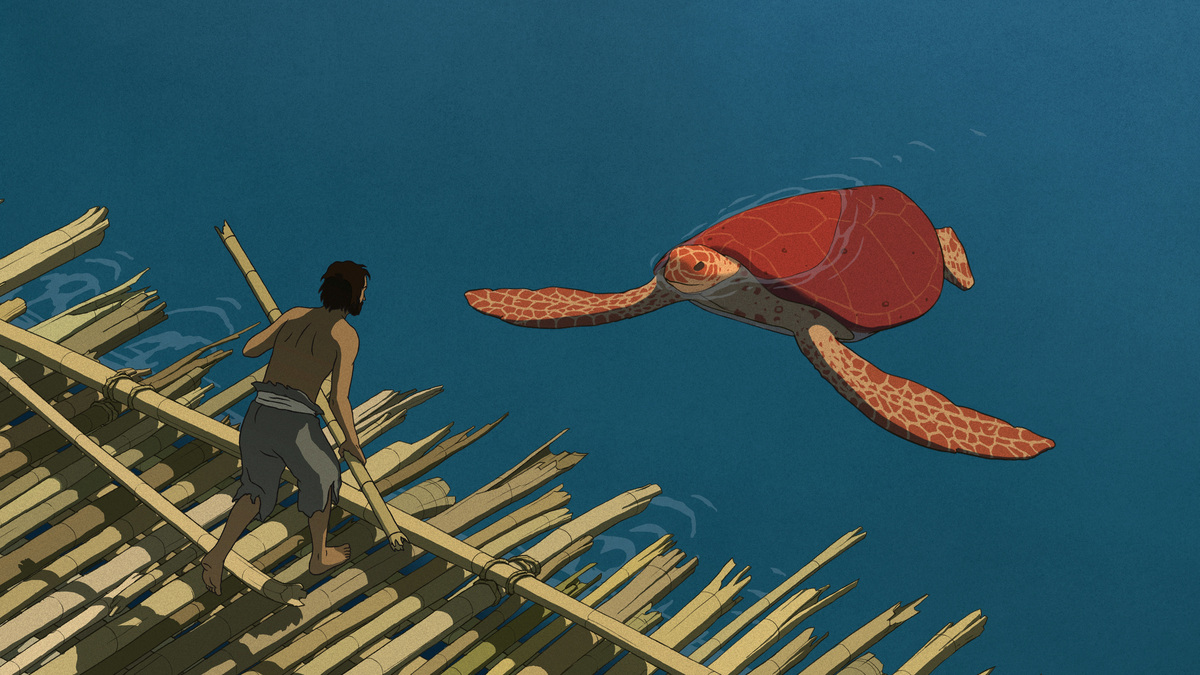 A castaway meets his reptilian — adversary? — in The Red Turtle.

Set on an apparently tropical island, The Red Turtle (La tortue rouge) exalts the cycle of life and celebrates the beauty of nature. Yet this dialogue-free animated fable could hardly be more anthropocentric.

The man around whom the film revolves is introduced literally at sea, battling to survive the stormy waves of a slate-colored ocean. The sketchily drawn, button-eyed survivor soon washes up on a remote isle. It's inhabited mostly by insects and crustaceans — the sand crabs provide low-key comic relief — although sometimes a larger creature comes ashore.

Water and food are available, and shelter is not an issue, since the climate is warm. Nonetheless, the castaway endeavors to leave, building a succession of rafts that are quickly destroyed by an unseen force. Eventually, the man encounters the creature that's preventing his escape. It's a gigantic red turtle.

Soon after, somehow, a woman appears. The pretty redhead's arrival reconciles the exile to remaining on the island, and the couple raises a son. The trio's existence is the human family in microcosm, without any pesky siblings or in-laws. It could be said, though, that the sea turtles that offer assistance during emergencies are cousins.

London-based Dutch animator Michael Dudok de Wit spent a decade making The Red Turtle, which is hand-drawn (mostly on electronic tablets, not paper ones). It's the first feature from a filmmaker who won an Oscar 17 years ago for Father and Daughter, a short that was also without words.

Dudok de Wit was recruited and mentored by Isao Takahata, of Japan's Studio Ghibli, which is best known for such tales of nature and transformation as Spirited Away and Princess Mononoke. The Franco-Japanese collaboration's supervising animator is Jean-Christophe Lie, who worked on The Triplets of Belleville.

The Japanese influence is apparent in both the movie's look and its story. The script, by Dudok de Wit and Bird People writer-director Pascale Ferran, features a bamboo forest and a catastrophic tsunami. The latter is one of several sequences that's suspenseful enough for a big-budget action movie. (Alas, Laurent Perez del Mar's drippy score also gives off a major-studio vibe.)

For a wordless South Seas idyll, the movie is quite eventful. Panicky moments and angry outbursts contrast the leisurely pace of island life and the artfully rendered sea and sky. The animators don't overplay the loveliness, preferring subdued colors punctuated by the occasional vivid blue. Red rarely appears, and the many dream sequences are as gray as the night from which they emerge.

Unless, of course, the entire movie is a dream. After all, things occur here that would be impossible in a non-animated cosmos. But if The Red Turtle is a fantasy, it's not one in which man achieves concord with nature.

Instead, after initially frustrating the castaway, the sea, the island, and their creatures accommodate themselves to him. Although viewers barely get to know the man, they can clearly see he's the center of this hand-drawn universe. That seems a curious outlook for movie that's being released just as climate scientists report that 2016 was the third year in a row to be the hottest ever recorded.