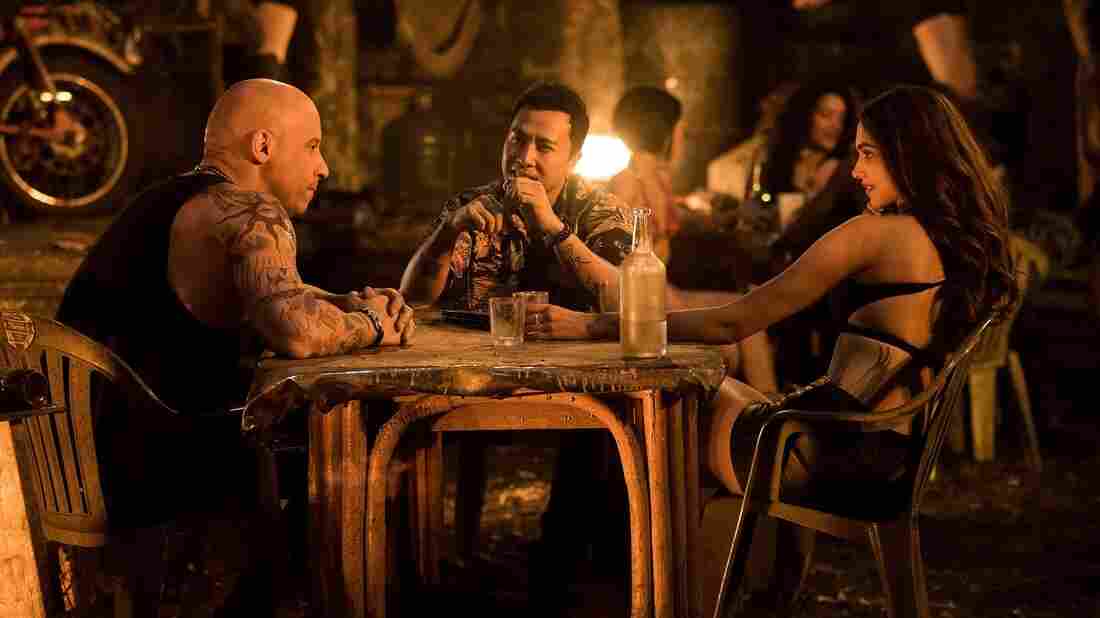 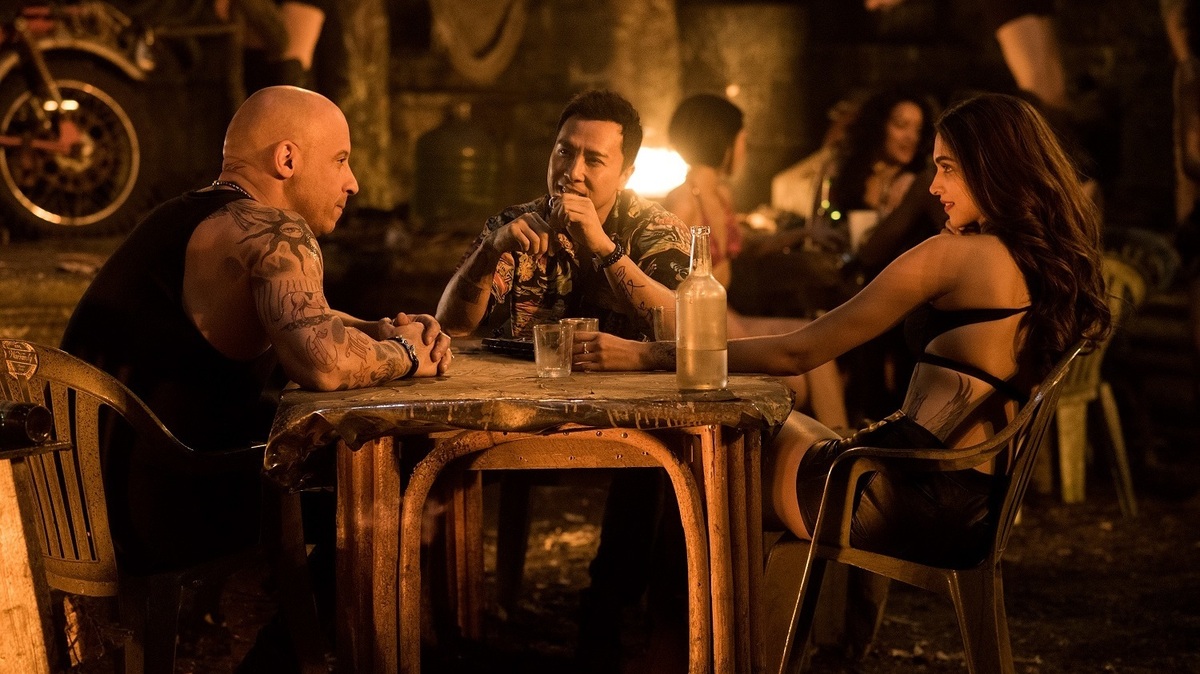 Diesel's protracted reign as an action star has always been a puzzle. His burly frame is most persuasive as a semi-mobile platform for tattoos. He does not run or fight very fast, or furiously, or convincingly. (And the stunt double or doubles who perform his highway skateboarding, dry-land skiing, and, um, water-motorcycling stunts here do not much resemble him, at least not in the cold, clear light of of IMAX.) He is as convincing an action hero as Sir Roger Moore was, XXX-plus years ago. Sure, Diesel looks a little sturdier. But it doesn't much matter that by Diesel's present age, Moore's body was already being held together only by a delicate exoskeleton of talcum powder and hairspray. Diesel's character, Xander Cage (!), knows that hairspray — like "suits" (as he calls his bosses), like sleeves, like hair itself — is for losers.

A sample: "He just took out the best of the best like it was Sunday brunch."

That Tower-of-Babel effect is sort of fitting, because like the Fast series, the xXx-iverse has generously exXxpanded and diversified its supporting cast to reduce its reliance on Diesel. Hong Kong action star Donnie Yen, contemporaneously starring in the equally diverse, infinitely better Rogue One: A Star Wars Story, has a strong role as Cage's second-banana. Thai martial arts star Tony Jaa is on hand too, as one of the bad guys, and his hands are blindingly fast. These two are world-class martial artists, but director D.J. Caruso cuts their fights in the way he would were he attempting to disguise the limitations of a far clumsier performer. (Vin Diesel, say.)

Also on Team Cage are Ruby Rose from Orange Is the New Black as a sniper, Scotsman Rory McCann from Game of Thrones as a... car-crasher, and Chinese-born Canuck Kris Wu as a D.J. As in: someone who spins records in nightclubs. You might reasonably ask what possible need an ostensibly covert, extreme-sports/black-ops squad has for a DJ, and the answer, I'm afraid, is that you could not possibly be totally extreme enough to understand.

Anyway, this bizarrely credentialed team is tasked with recovering a device called ... Pandora's Box. (When Mission: Impossible III christened its MacGuffin "The Rabbit's Foot" 11 years ago, and declined to ever say what it really was, that was a smart joke.) You keep thinking maybe Xander Cage — everyone refers to him by his first and last name in this movie, presumably in deference to the degree of his in-your-face extremity — will shoot someone with Chekhov's Gun or even cut a fool with Occam's Razor, but no. There are no smarty-pants jokes in Vin Diesel movies.

We're told, in a brief-but-still-painful expository scene that even the great Toni Collette (as an NSA official) can't pull off, that Pandora's Box can be used to hack into any computer on Earth. So what the bad guys decide to use it for is ... plucking satellites out of orbit and dropping them on top of buildings, like so many anvils in a Road Runner cartoon. But that's not remotely how orbital mechanics work, you protest. Save it, you sleeve-wearing Poindexter! This movie is just a little too exXxtreme for you.

This is not a film that subtly suggests anything, but one of the things it insists upon most loudly is that women who are approximately 45 percent of Diesel's age cannot keep their hands off him. (Former The Vampire Diaries star Nina Dobrev ends her character's introductory scene by volunteering her safe word.) Collette is a mere five years younger than Diesel, so naturally her character is portrayed as a post-sexual harridan. Collette has a long resume of complex roles in real movies, and she looks like she's composing an angry e-mail to her agent even as she's delivering her lines. Maybe she took this job because she always wanted to visit Detroit. (xXx: Return of Xander Cage was filmed on location in Toronto, the Dominican Republic, and Detroit.)

I eventually lost track of the bits, scenes, and lines xXx iIi had ripped off wholesale from films as various and sundry as Point Break (v. 1991), Lethal Weapon 3, True Lies, and even Captain America: Civil War. At one point Dobrev likens the hunt for Pandora's Box to looking "for a needle in a stack of needles," which is both a mixed metaphor and a possibly-intentional nod to another film wherein that exact expression is spoken: Saving Private Ryan. That 19-year-old Oscar winner featured a sleeves-on, not-outwardly-extreme Diesel in a small but memorable supporting role. It was possible to believe then, as it was with Sylvester Stallone after Rocky, that a brilliant career awaited him. But when two roads diverged in the wood, Vin Diesel choose the path of most total extremity. He looks at peace with his choice.