Accessibility links
In U.S. Ethics Chief, An Unlikely Gadfly To Trump Next week, leaders of the House Oversight Committee are expected to meet with the director of the Office of Government Ethics, who has been under fire for admonishing Trump to divest his businesses. 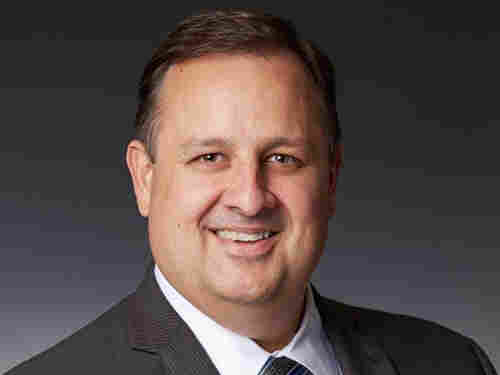 When the Watergate scandal blew up in the 1970s, one of the things to emerge from its shadow was the Office of Government Ethics. And OGE usually works quietly behind the scenes to make sure that people who run the country have no financial ties that could influence their work.

At its helm is a man named Walter Shaub Jr., a longtime ethics lawyer, who has been at OGE for a decade. And when you ask people about him, Shaub is described as careful, even-keeled, even kind of boring — a government lawyer.

That made it all the more surprising that he was the man who orchestrated a bizarre, Trump-style tweetstorm from OGE, saying things like "Bravo!" and "Brilliant! Divestiture is good for you, very good for America!" — despite Trump's never promising any such thing.

"I was trying to use the vernacular of the president-elect's favorite social media platform to encourage him to divest," Shaub explained last week, in another unexpected situation — a 13-minute speech, added at the last minute to an event at the Brookings Institution.

"I wish circumstances were different and I didn't feel the need to make public remarks today," he said. "You don't hear about ethics when things are going well."

In a steady monotone, Shaub denounced Trump's plan — to keep ownership of his business empire, but shift management to his sons — as inadequate and meaningless: "The plan the president-elect has announced doesn't meet the standards that the best of his nominees are meeting and that every president in the past four decades has met."

This campaign to get Trump to divest his businesses has put Shaub in the Republican crosshairs. House Oversight Chairman Jason Chaffetz has accused him of partisanship and summoned him to a meeting, pointing out that his committee oversees OGE's budget.

Shaub, who declined NPR's interview request, wrote back to Chaffetz this week, asking for a public meeting. But Chaffetz's office says the meeting has now been set for Jan. 23 — and it will be private.

Democratic ranking member Elijah Cummings is slated to attend as well and has urged Chaffetz to open the meeting at least to other members of the committee.

Ethics experts and editorial boards of The Washington Post and The New York Times have sided with Shaub. Richard Painter, former chief ethics lawyer to President George W. Bush, says Trump should rein in Chaffetz and avoid escalating the matter.

"The worst thing is for Congress to start going after OGE on behalf of the president, make the president look terrible," says Painter, now a professor at the University of Minnesota.

Presidents are subject to several ethics rules, including bribery and insider trading laws and restrictions on gifts (emoluments) from foreign officials.

But as Trump and his team often point out, legally, presidents are exempt from conflict-of-interest rules that apply to their Cabinet members.

"The president, by law, doesn't have conflicts. I mean, it's somewhat of a silly discussion," spokesman Sean Spicer told reporters last week, adding that Trump's actions were already "above and beyond" the legal requirements.

However, historically, since Watergate, presidents have voluntarily complied with the same standards that apply to their nominees, who have to negotiate an ethics deal with OGE. Such a deal may mean sale of assets, dissolution of a business or recusals from some matters to avoid conflicts between personal interests and those of the nation.

The Senate, which confirms presidential nominees, has traditionally reviewed these ethics deals after OGE signs off on them, though this year, OGE has raised concerns that the nomination hearings were moving faster than the agency's ethics reviews.

And fundamentally, ethics experts say OGE doesn't have enforcement power and doesn't do investigations. Any potential conflicts of interest would likely fall to Congress, the Justice Department or courts. So getting in a spat with OGE sends the wrong message — and any effort to push Shaub out of his job would be worse.

"Firing the head of the Office of Government Ethics is about the dumbest thing the president could do if he wants the public to have confidence in his ethics," Painter says.

Shaub's term as OGE director runs into 2018. The next time Trump will have to deal with him is likely when the president submits his financial disclosures. OGE has to sign off on them.