Accessibility links
Inauguration Day, 2017: What Would Donald Trump Do In The World When the clock struck noon, the White House website switched over to signify Donald Trump becoming the new president. And on that site, Trump laid out how he would approach the world. 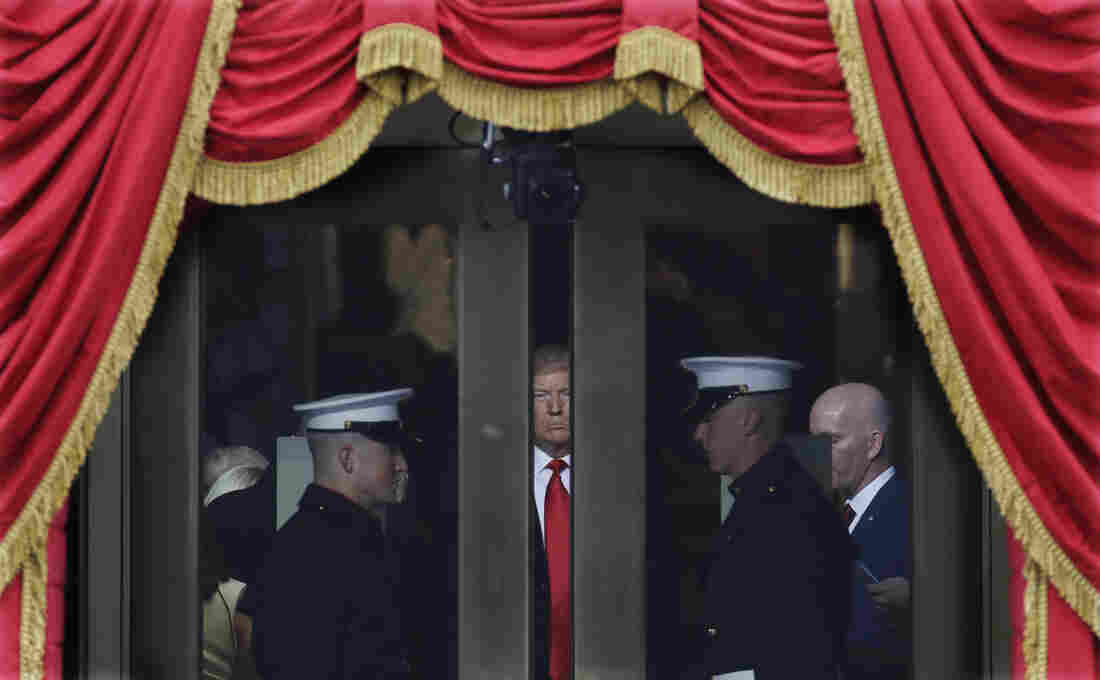 President-elect Donald Trump waits to step out onto the portico at the West Front of the U.S. Capitol for his inauguration. Patrick Semansky/AP hide caption 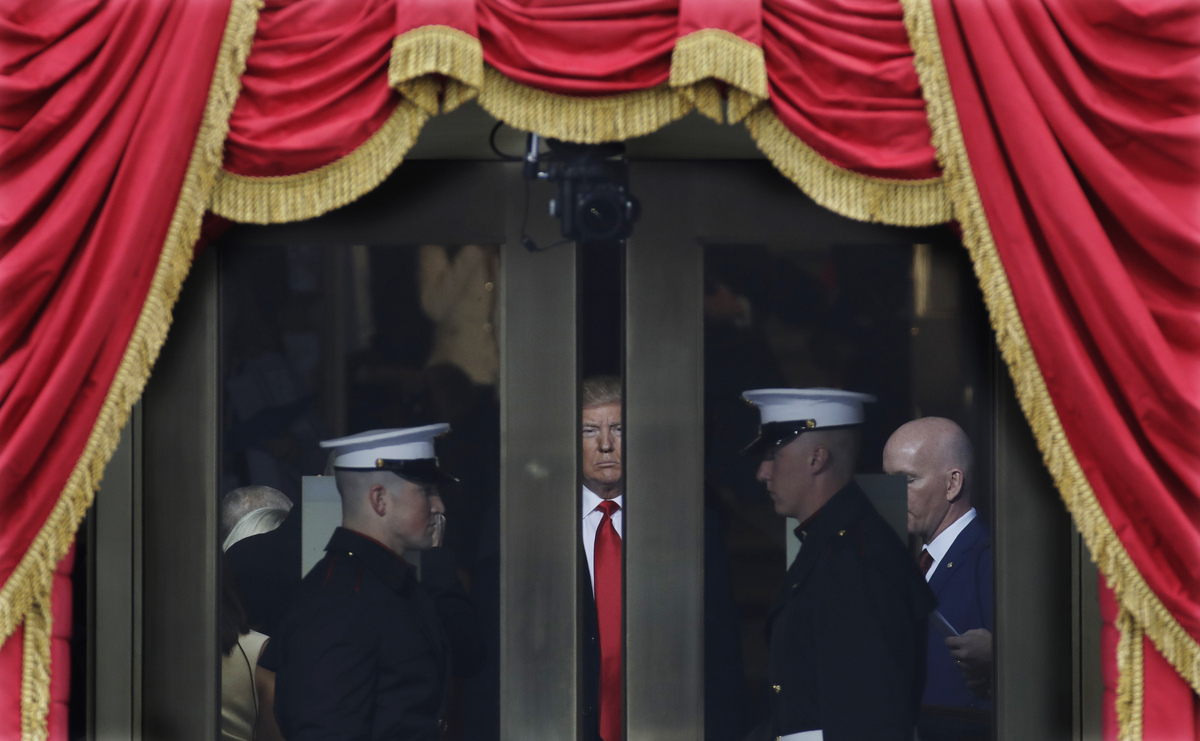 President-elect Donald Trump waits to step out onto the portico at the West Front of the U.S. Capitol for his inauguration.

When the transition from President Obama to President Trump happened officially at noon ET, a lot changed, including the White House website.

Waiting on the new website were six priority areas laid out, including on foreign policy. The entire foreign policy section is literally just 220 words, so it's hard to draw more than a thumbnail sketch about Trump's foreign policy. But it gives the first hint of something of a Trump doctrine.

Echoing his inaugural address, "America First" is the organizing theme. To that protectionist point, there's a whole section on trade.

And Trump specifically laid out three points on his approach to the world and his priorities:

On defeating ISIS, however, it still remains unclear what Trump will do exactly. ISIS was the top concern for Republican primary voters, and his tough rhetoric helped him in the campaign. He declared he would "bomb the s*** out of them" but would not lay out a plan. He said he wanted to be "unpredictable."

He never committed to a ramping up of ground troops. But he mentioned the possibility of as many as 30,000 troops to fight ISIS in Iraq and Syria. That's nowhere close to the number of troops the U.S. had at the height of the Iraq war, but — if Trump followed through — it would represent a significant ramping up of U.S. involvement.

Currently, there are only about 600 American military personnel in Syria, about 8,400 in Afghanistan and almost 6,000 in Iraq.

Russia is also a critical player in Syria. Trump, of course, has said he would be reaching out to Moscow to help fight ISIS and hopes the Russians are helpful. 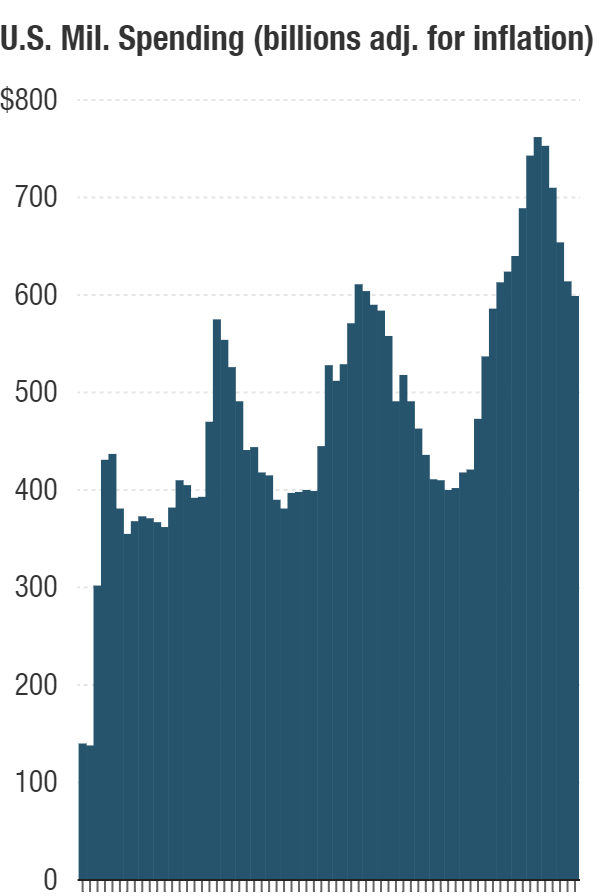 Since 1949, adjusted for inflation, aside from the post-Sept. 11 buildup, only in 1986 and 1987 (during the Reagan administration) did the U.S. spend more on its military than it does now. Domenico Montanaro/NPR/Stockholm International Peace Research Institute hide caption

Trump has repeatedly harped on this throughout the campaign, but the context here is important. The U.S. spends $596 billion a year on its military. That's about three times more on its military than all other NATO countries — combined.

While spending, adjusted for inflation, has declined some during the Obama administration, the U.S. remains the largest and most capable military in the world.

Trump said his foreign policy would be "based on American interests." The new president has been very anti-trade. He has actually been against U.S. trade policies for decades; the rhetoric has remained the same since the 1980s. But back then the bogeyman was different — today, he talks of China; back then, it was Japan that he said was dumping its cars and VCRs.

Trump also noted that he would "embrace diplomacy," that the U.S. would "not go abroad in search of enemies," but "that we are always happy when old enemies become friends, and when old friends become allies."

The turn of phrase — "we are always happy when old enemies become friends" — could be interpreted somewhat provocatively. It could raise eyebrows politically, given Trump's praise for Russian President Vladimir Putin throughout the campaign and his grudging acceptance that Russian meddling was responsible for the hack and leaks of Democratic emails.

"I think it was Russia," Trump said in his first press conference since being elected before adding later: "All right, but you know what, it could have been others also."

On "old friends" becoming "allies," ironically, it is precisely America's closest allies — Japan, South Korea and most of NATO — who are most queasy about Trump's provocative talk that has questioned the utility of these decades-long relationships.

A chart showing military spending by NATO countries has been removed from this page because of inaccuracies in the figures given for many of those nations. Data on the defense spending of NATO countries are available here.