Accessibility links
Gallaudet President Navigates From World Of Hearing To Sound Leadership Of The Deaf Roberta Cordano is the first Deaf woman to lead Gallaudet University, the world's only liberal arts university for the deaf and hard of hearing.

Listen · 3:49 3:49
Gallaudet President Navigates From World Of Hearing To Sound Leadership Of The Deaf 3:49 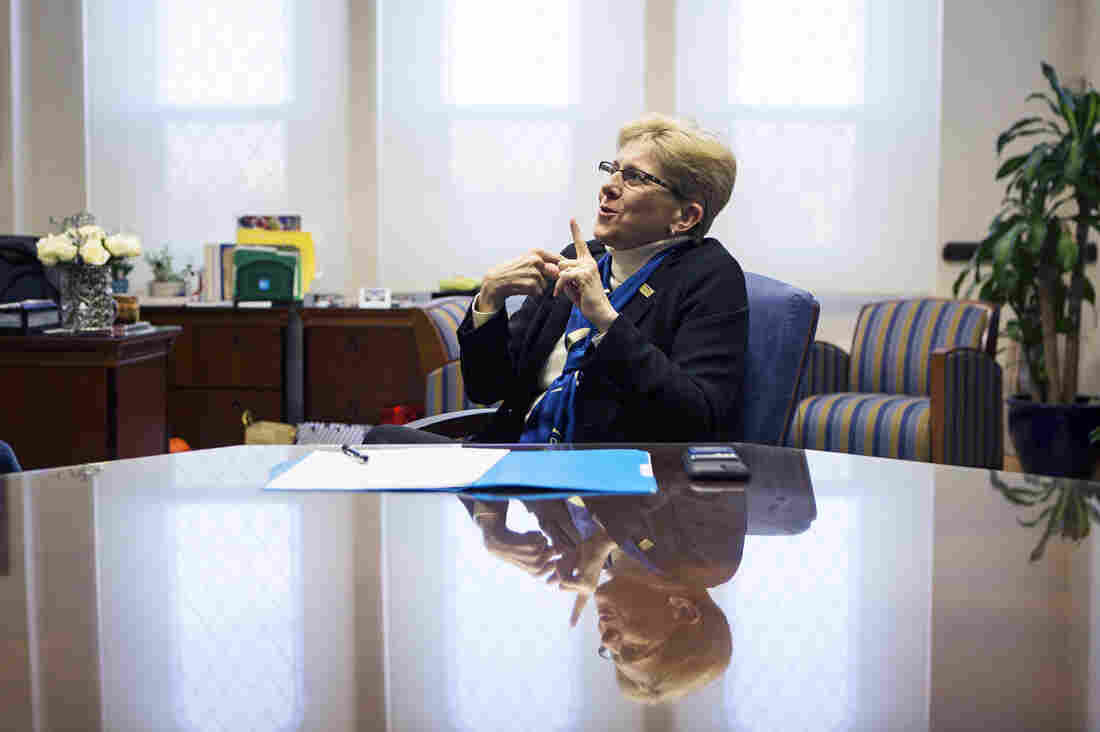 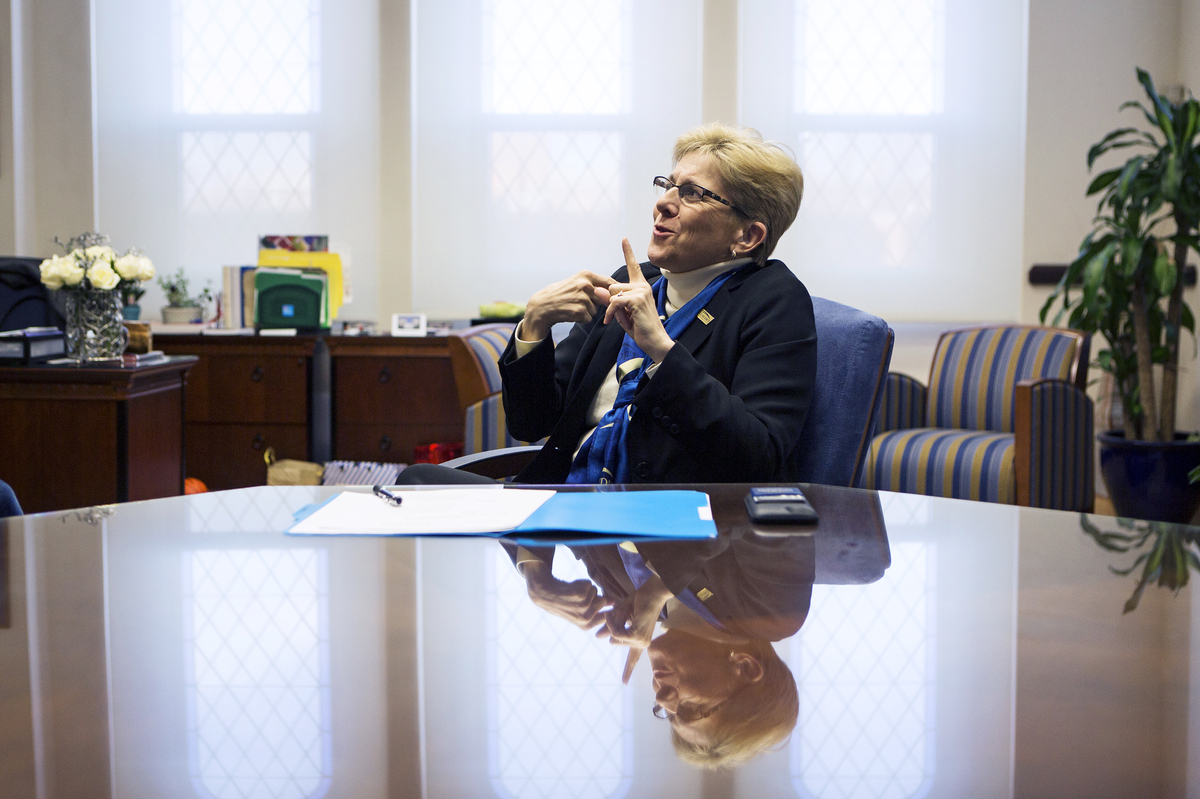 Gallaudet University President Roberta Cordano speaks using American Sign Language in her office in Washington, D.C. She is the first Deaf woman president at the university.

In its 152-year history, Gallaudet University in Washington, D.C. never had a deaf female president — until a year ago. Roberta Cordano is the first deaf woman to lead the school.

Gallaudet is a liberal arts university devoted to deaf and hard-of-hearing students. Classes are taught in American Sign Language, and all students and faculty are required to know how to sign.

But president Cordano never attended a deaf school herself.

"I grew up during a period of time when it was believed that American Sign Language was what they called a monkey language," Cordano says, speaking through an interpreter provided by Gallaudet. While the interpreter translates rapidly, Cordano whispers out faintly in English as she signs.

Cordano grew up surrounded by other Deaf people. Her parents and older sister are Deaf and so were many of her childhood neighbors. Her hometown of Delavan, Wisc., is where the Wisconsin School for the Deaf is located. But even though her father was a teacher there, her parents sent her to the local public school.

"They wanted to make sure their children were going to do well," she says. "At that time, it wasn't really understood that American Sign Language was a language in and of its own right."

Going to a hearing elementary, middle and high school made Cordano a pro at reading lips and pronunciation. She never had an interpreter in the classroom.

"I had worked all day long trying to understand people and focus so much on what they were saying and then figuring out what I was trying to be taught."

Cordano says she had to work twice as hard as her peers just to keep up. But she didn't burn out. When time came to choose a college, Cordano decided to stay in a hearing environment. She went to Beloit College for undergrad and the University of Wisconsin-Madison for law school.

She broke with family tradition; her parents and older sister are alumni of Gallaudet.

"They understood the value of understanding and appreciating the richness of both worlds," Cordano says.

While Cordano enjoyed her college and law school experience, she was often the only deaf person in the room. Her experience is contrastingly different from the lives Gallaudet students lead on campus.

"It's like another country," says freshman Ariella Dramin, who also spoke through a Gallaudet interpreter. "It would be nice if we had our own country, but we don't."

Dramin is fourth generation deaf. She says being deaf should be seen as a culture, not a disability. It's a concept, she adds, that many people outside of Gallaudet don't understand when they meet her.

"I hate when people at a store try to say something to me and I say, "I can't hear you," and they have this pity face," she says. "We're a community, we're fine. We have a language."

American Sign Language flourishes at Gallaudet. Students chat with their peers in the lunchroom and as they walk through the hallways to class, carrying out their conversations with their hands and facial expressions instead of spoken words. Gallaudet feels like any other college campus, just quieter.

While Gallaudet is the only university devoted solely to the deaf and hard of hearing, the Americans With Disabilities act requires all universities to provide interpreting services. But third-year Savannah Hobbs chose Gallaudet because she didn't want to rely on someone to translate for her. She didn't enjoy having an interpreter in elementary school.

"The interpreter doesn't go with me to lunch. I was completely left out of any kind of conversation," she says. "Here, not only can I have my own conversation at lunch, but I can just look over to a table and see what other people are talking about because everyone's using the same language."

There's a long history of Gallaudet students insisting deaf people are as capable as the hearing.

In 1988, Gallaudet students led massive protests calling for the school to appoint its first deaf president. The Deaf President Now protests were successful and the university has maintained a tradition of having a deaf leader ever since.

Despite her deaf upbringing, Cordano brings an outsider's perspective to Gallaudet. Most of her private and professional life has been in hearing environments. Her wife and two children are hearing, and most of the jobs she's had before coming to Gallaudet – she's done everything from lead healthcare companies to serve as the assistant attorney general of Minnesota - were in a places where she, as a deaf woman, was a minority.

"When I moved to Minnesota, I actually saw the model of bilingual education," Cordano says, referring to schools where deaf and hard-of-hearing students receive equal instruction in both English and American Sign Language. Cordano helped start two charter schools following this model.

"I grew to love and respect that model so much because I realized it was an option I was never given."

Cordano never had a deaf school experience of her own where she could sign to her classmates and peers. But she doesn't feel like she missed out.

She considers herself an inherent optimist.