Accessibility links
Trump And White House Press Secretary Attack Accurate Media Reports On Inauguration Crowds Press secretary Sean Spicer berated the press over its reporting on crowd size at the National Mall, but then he cited incorrect numbers for Metro ridership and falsely claimed the mall was full. 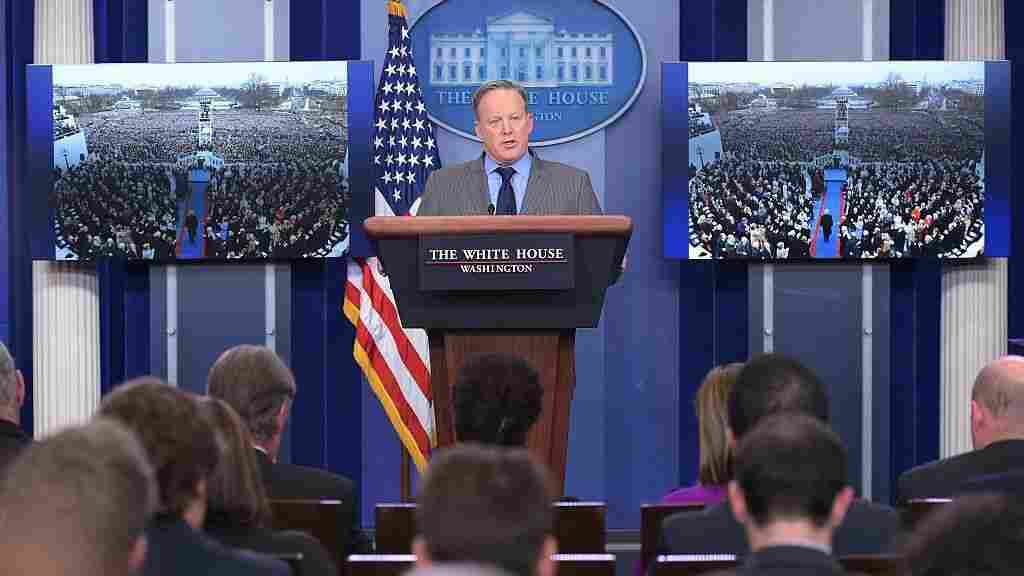 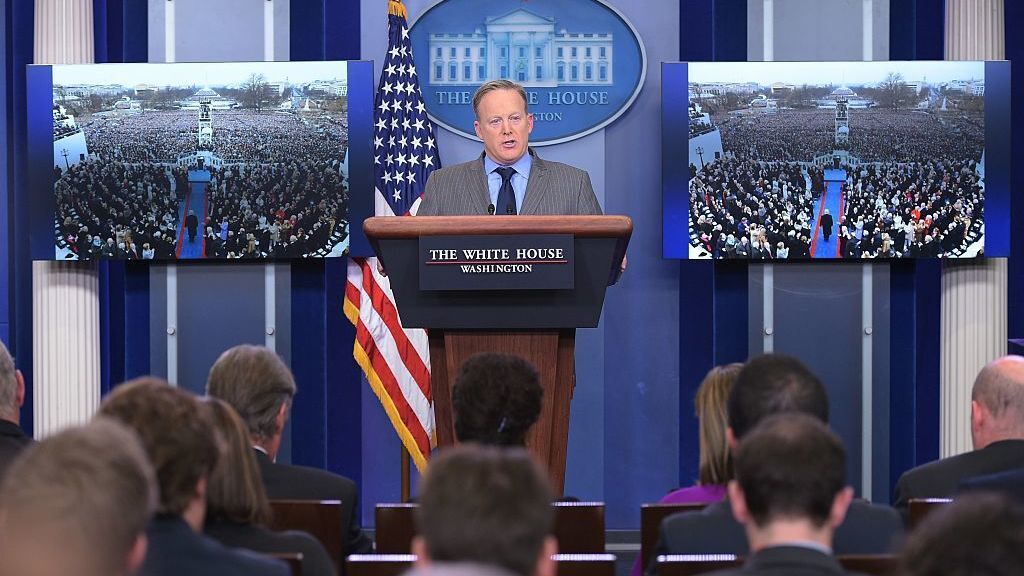 White House Press Secretary Sean Spicer delivers a statement in the Brady Briefing Room of the White House on Saturday.

Trump Is Bringing His Love-Excoriate Relationship With Media Into Office

The Trump Administration spent its first full day in office taking shots at the media and arguing about crowd sizes at Friday's inauguration.

Press secretary Sean Spicer delivered a fiery broadside against the Fourth Estate from the White House Briefing Room Saturday evening, claiming that reporters had engaged in "deliberately false reporting" in the past 24 hours since President Trump took the oath of office. And, after berating the press, he walked away without taking any questions.

"Photographs of the inaugural proceedings were intentionally framed in a way, in one particular tweet, to minimize the enormous support that had gathered on the National Mall," Spicer claimed.

He blamed new floor coverings on mall areas that "had the effect of highlighting any areas where people were not standing, while in years past the grass eliminated this visual." And Spicer claimed that fences and magnetometers going further back than ever prevented "hundreds of thousands of people from being able to access the mall as quickly as they had in years past."

However, CNN reporter Ashley Killough tweeted out a photo showing that floor coverings had in fact been used at Obama's second inauguration.

Spicer said this was the first time floor coverings were used on the national mall. I took this photo at the inauguration in 2013. pic.twitter.com/MVHPQQ6Y5F

Spicer correctly said that the National Park Service does not do crowd estimates any longer, so that there was no official estimate to rely on, and NPR has made no official estimation of crowd size because official figures aren't available.

"This was the largest audience to ever witness an inauguration — period — both in person and around the globe," Spicer said in another unverifiable claim.

"All of this space was full when the president took the oath of office," Spicer said, claiming the entire area from the Capitol to the Washington Monument was full.

However, aerial photographs show that claim is false. The area just in front of the Washington Monument was sparsely populated and far from full, as confirmed by photographs and from NPR's reporters on the ground.

Trump tweeted Sunday morning that the television audience was larger than the second inauguration of Barack Obama in 2013. Ratings from Nielsen showed an audience of 30.6 million on Friday. Their ratings from 2013 back up Trump's assertion, with an audience of 20.5 million.

Wow, television ratings just out: 31 million people watched the Inauguration, 11 million more than the very good ratings from 4 years ago!

The dispute over crowd size came Saturday as thousands and thousands of women and men gathered in D.C. and in major cities around the country and the world to participate in the Women's March on Washington to protest Trump's agenda on women's rights and his past statements degrading women.

Trump himself had made similar claims disputing crowd estimates earlier on Saturday when he traveled to the CIA to address intelligence officers. The president said he believed there was anywhere between 1 million and 1.5 million people on the National Mall as he delivered his inaugural address, and he also falsely claimed it stopped raining and the sun came out just as he started speaking when, in fact, the rain continued and the day remained overcast and cloudy.

Spicer lectured reporters for not focusing more on Trump's CIA speech, telling them "that's what you folks should be writing and covering instead of sowing division about tweets and false narratives."

Spicer also complained about a report from pool reporter Zeke Miller of Time Magazine on Friday that Trump had removed a bust of Martin Luther King, Jr., from the Oval Office. Miller later admitted he had made a mistake, apologized and reported that it had "been obscured" by a Secret Service agent and a door." President Trump himself also attacked Miller over that mistake in his speech at the CIA.

Spicer claimed that report was "irresponsible" and "reckless," but in fact the press secretary had tweeted Friday night that he accepted Miller's apology.

Spicer ended with an unprecedented warning that they would hold the press accountable and go around them when necessary.

"The American people deserve better, and as long as he serves as the messenger for this incredible movement," Spicer said of the president, "he will take his message directly to the American people, where his focus will always be."