Accessibility links
Book Review: 'The Futures,' By Anna Pitoniak Anna Pitoniak's novel follows Evan and Julia, newly-minted Yale graduates trying — and finding it difficult — to make new lives for themselves in New York City on the eve of the crash of 2008. 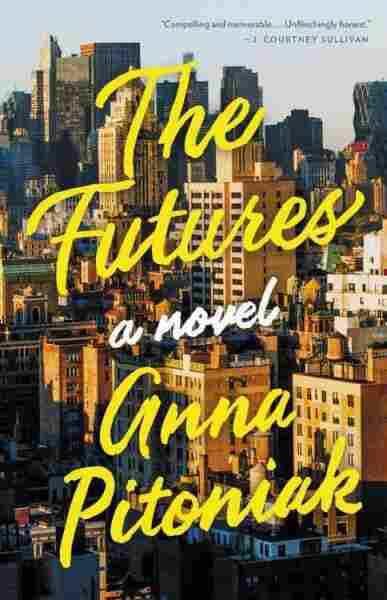 Psychological research tells us that a surefire path to personal happiness is to make other people happy. In light of this, then Julia, the protagonist of The Futures, is doomed. With Julia and her boyfriend, Evan, debut novelist Anna Pitoniak has created a dark look at recent college graduates who embark on building a life for themselves in New York City. Julia makes a series of grievous mistakes that send her into solipsistic despair; Evan is trapped in a bubble of his own misery. Making anyone happy is beyond them.

Evan and Julia meet cute as freshmen at Yale and immediately know they are meant to be together: He likes her freckled nose. She likes the way he smells. He is an ace hockey player, a small town Canadian kid. She is artsy, Boston-Brahmin bred. Deciding to live together after graduation, they consider the move to Manhattan as barely a choice, it seems so obvious. In their earnest innocence, the city appears as "a dazzling, life-size diorama."

When Hannah, Lena Dunham's character on the bittersweet HBO dramedy Girls, goes in to get tested for an STD, her gynecologist hears her self-pitying natterings about her life and says, "You couldn't pay me to be 24 again." Hannah responds, "Yeah, well, they're not paying me at all." Likewise, there's no compensation for Pitoniak's young couple and their tsuris, especially after both of them lose their jobs in the financial meltdown of 2008.

Julia and Evan pass the narrative baton back and forth in alternating chapters. Presenting different takes on the same events is not a new strategy, but it works well here, especially as they grow increasingly estranged, and their contrasting visions fall into sharper relief. The Futures is packed with mirror characters, friends and acquaintances that reflect back the couple's dreams and anxieties. Evan's callow Wall Street work posse show us the amoral swamp he's sinking into. Abby, Julia's best friend, has her own romantic trajectory, making it clear just what Julia is missing.

Pitoniak's precise and incisive powers of observation give us a book with startling grace notes.

There is another major actor in The Futures: New York City itself. As in earlier, seminal novels about similar 20-something cohorts — among them Jay McInerny's Bright Lights, Big City, Brett Easton Ellis's American Psycho and Sylvia Plath's The Bell Jar — the city is another mirror character, a puzzle the protagonists must solve as they come to grips with their own lives. Evan muses that "the city had been witness to different versions of myself" that "gave me a new claim over this place." It "had a way of shrinking my pain to a bearable smallness," he goes on. "Any given day, in any given subway car, there were people who were happier than I, people who were sadder than I. People who had erred and people who had been forgiven. I was mortal, imperfect, just like everyone else."

Pitoniak's precise and incisive powers of observation give us a book with startling grace notes. When Julia visits a friend in her artistic sister's Chinatown sublet, the author describes the "bouquet of bodega carnations," a native detail tossed off with a maturing writer's flair. Every New York book has its totemic cocktail, and here it is vodka and soda with lime.

In a desperate search for answers — and after being English Lit-averse in college — the struggling Julia begins to crack open the classics. I felt an impulse to help her out by recommending On the Road, written when Jack Kerouac was 29 and based on events that took place in his early 20s. She might be inspired by his wild encomium about youth: "The only people for me are the mad ones, the ones who are mad to live, mad to talk, mad to be saved, desirous of everything at the same time."

A little amphetamine wildness is something The Futures could use. Yet Julie and Evan's world is not that of Kerouac, and the people who populate the New York City of 2008 have their own challenges. Grim as their world tends to be, it is our world, and Pitoniak gets much of it right.