Accessibility links
With 'Pussyhats' At Women's Marches, Headwear Sends A Defiant Message Throughout the crowds at Women's Marches on Saturday were thousands of knitted pink caps. People wore them to send a message to President Donald Trump.

Throughout the crowds at Women's Marches on Saturday were thousands of knitted pink caps. People wore them to send a message to President Donald Trump.

If you caught a glimpse of the Women's Marches on TV or social media Saturday, you probably noticed a sea of pink, knitted hats with catlike ears. They've been dubbed pussyhats. And as NPR's Brakkton Booker reports, yes, it was a symbol of solidarity for women's causes. But it was also a defiant message.

UNIDENTIFIED PROTESTERS: (Chanting) We will not go away. Welcome to your every day.

BRAKKTON BOOKER, BYLINE: Thousands marched through the streets of the nation's capital yesterday and eventually made their way to the White House. Jamie McGovern marched with her sisters, her baby daughter Helen strapped to her back.

JAMIE MCGOVERN: We decided that we just had to come and march. And my mom knit us all pussyhats.

BOOKER: McGovern acknowledges some may find the name of the hats vulgar. But...

MCGOVERN: I feel like we kind of had to take it back - make it a feminist word.

BOOKER: A 2005 video of Donald Trump bragging about grabbing women by their genitals inspired the hat's creation. Deepti Sethi marched with her mom and sister - all wearing the hats. She says it's empowering to reappropriate the word.

DEEPTI SETHI: I think sitting there and saying I'm wearing a pussyhat and not having it reflect something vulgar, something that you should shy away from.

BOOKER: Mom Hema Sethi jumps in with a message to President Trump.

D SETHI: We've got brains. We've got hearts. We've got everything else. You can't just reduce us to just a single anatomical element of our bodies.

With 'Pussyhats,' Liberals Get Their Own Version Of The Red Trucker Hat 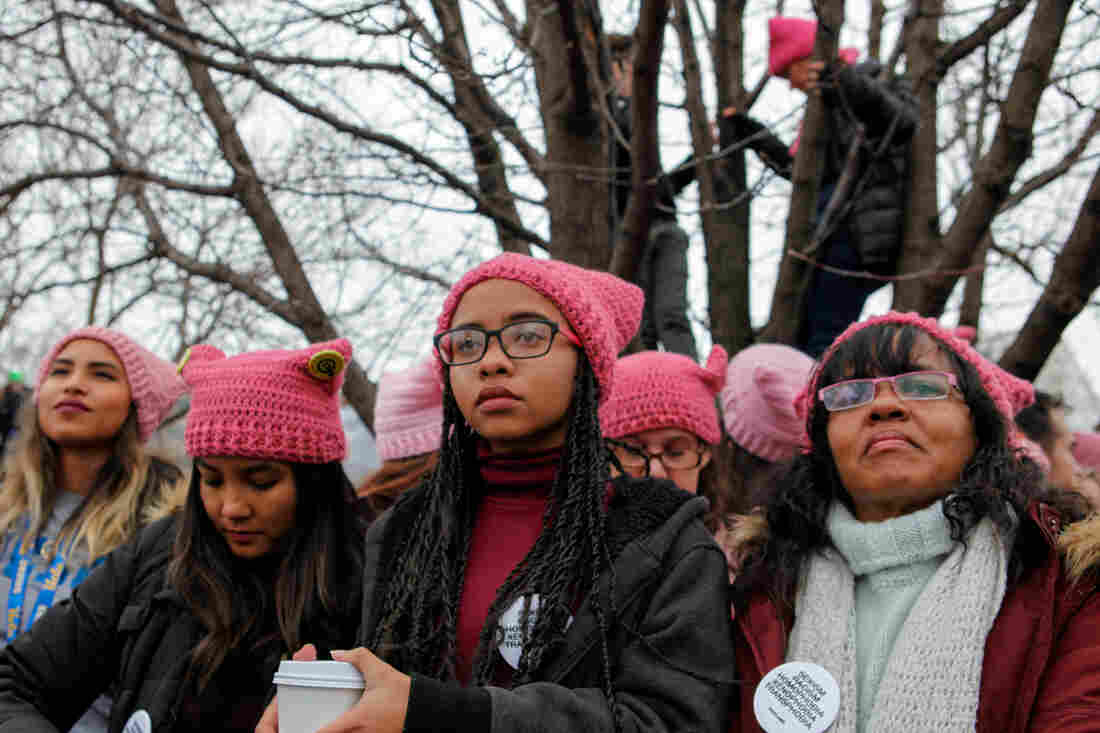 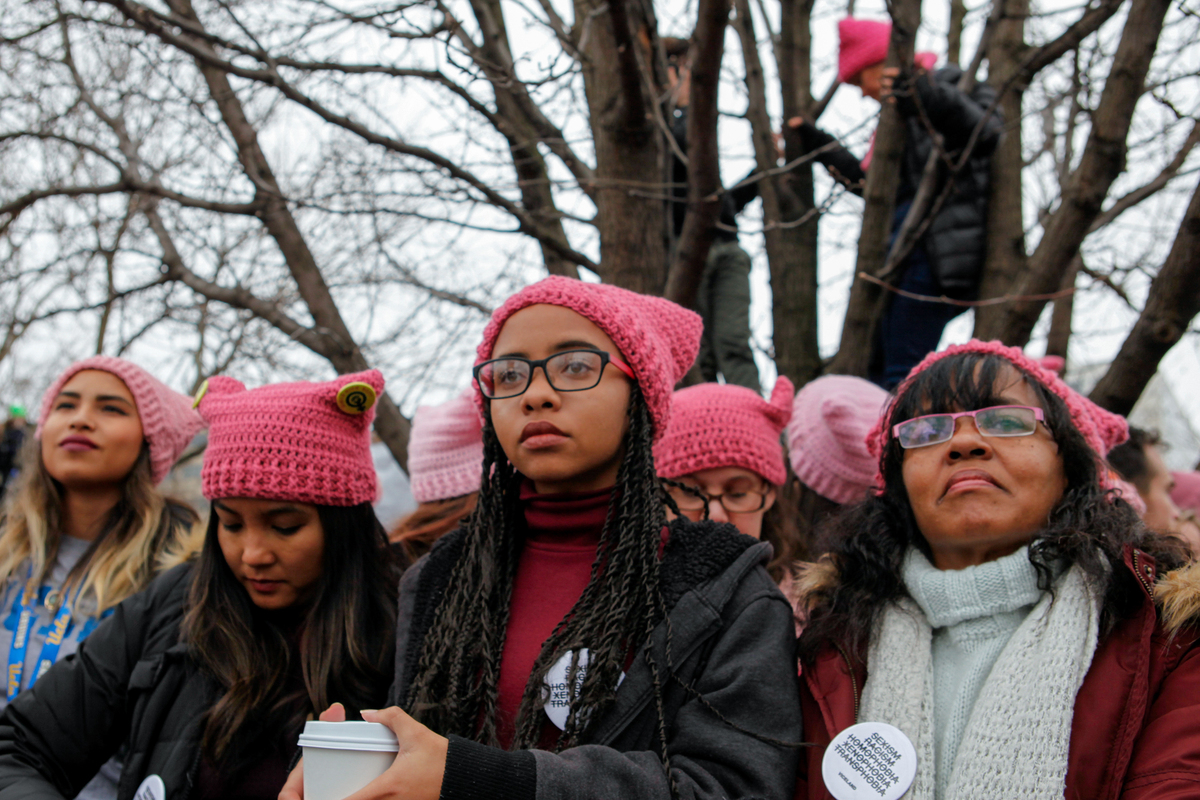 Nia (center) and Lonia Brown traveled from California to join the Women's March on Washington.

Donald Trump took the oath of office on Friday before a crowd speckled with red, many of them wearing the campaign's famous "Make America Great Again" hats.

Saturday's Women's March on Washington in downtown D.C. drew a crowd with vastly different political beliefs, but there was one similarity, as the sea of people was peppered with pink, cat-eared "pussyhats." The (mostly) homemade hats were a sly reference to lewd comments Trump made in a 2005 Access Hollywood tape leaked a month before the election. And they also echoed some of the traits that experts said made the Trump hat so effective for the winning candidate.

Marchers on Saturday said they liked the hat because it unified them around one general message.

"I think this woman who put this together is frickin' brilliant and a genius because it's such a political, simple statement: a pink hat, and all you have is the pussycat ears," said Mellicent Dyane, 50, a casting director from New York City, wearing a neon pink hat as she watched the rally. "It speaks volumes." 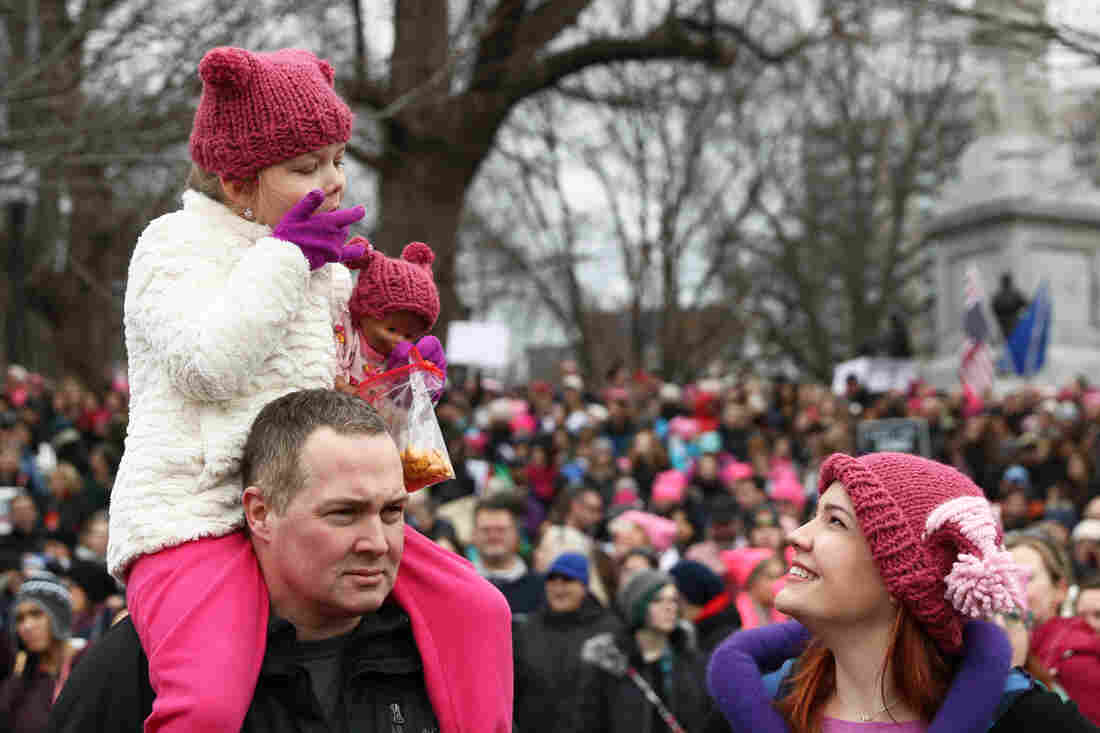 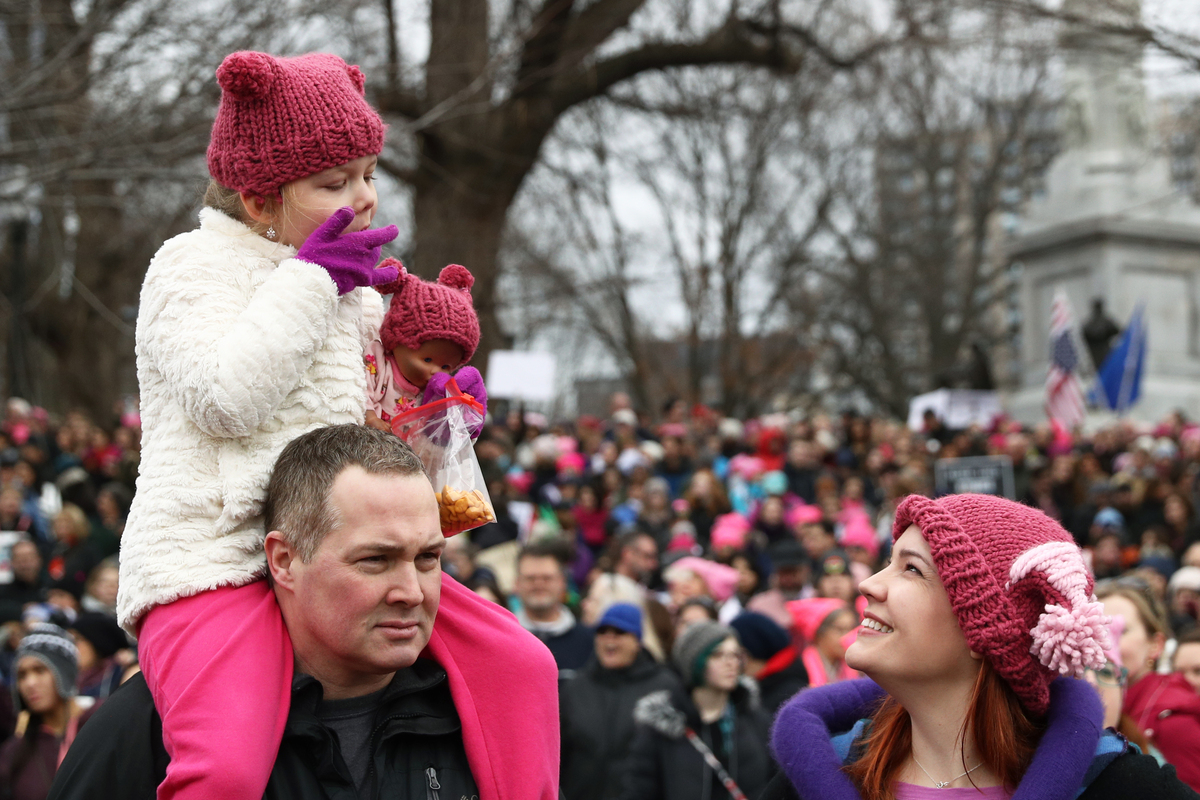 Ayla, 6, Jeff and Kaari Lynch gather on Boston Common during the Boston Women's March for America on Saturday.

In that sense, the pussyhat has some of the same traits that made the "Make America Great Again" hat work: it sends a very particular political message, one that is simultaneously unifying and antagonistic.

The Trump "Make America Great Again" implies that somehow, someone (perhaps the political establishment, especially from the party in power for the last eight years) allowed America to no longer be great, and that the wearers are banding together to get that greatness back.

Despite not bearing a slogan, the "pussyhats" have their own clear target of criticism, explains one expert.

"It doesn't have the words on the hat like the 'Make America Great Hat' does, but the name of the hat evokes memories of this [Access Hollywood] tape that has a message that the people who made this want to convey," said Todd Davies, associate director of Stanford's Symbolic Systems program. 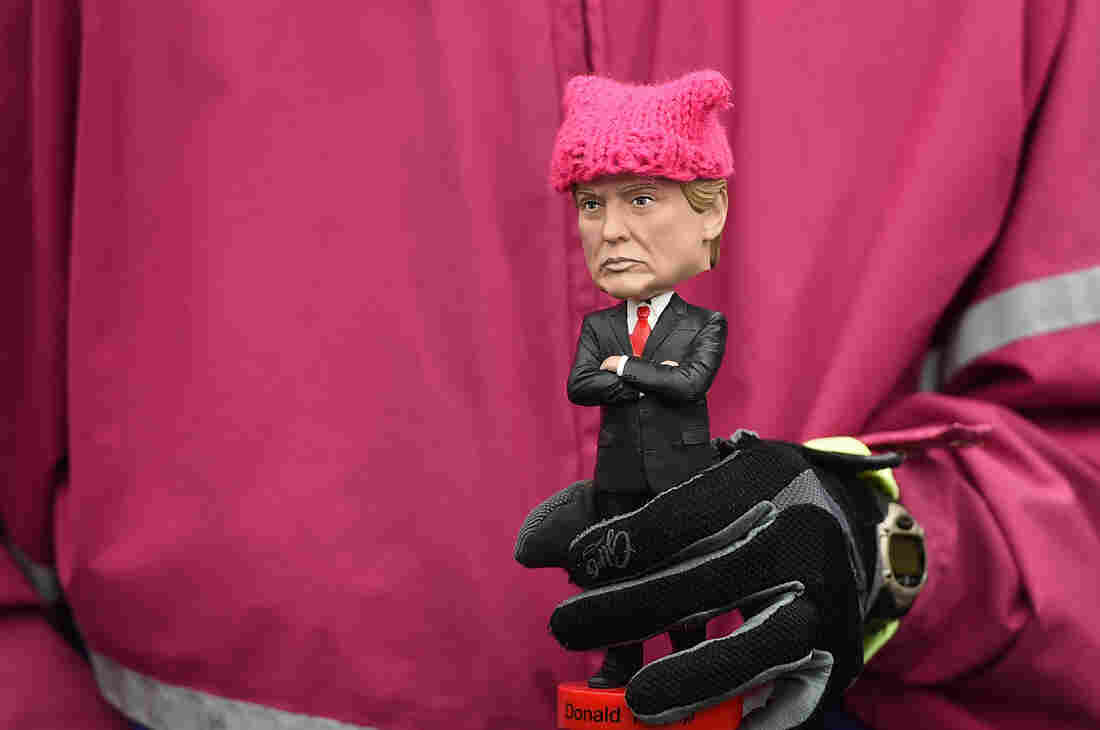 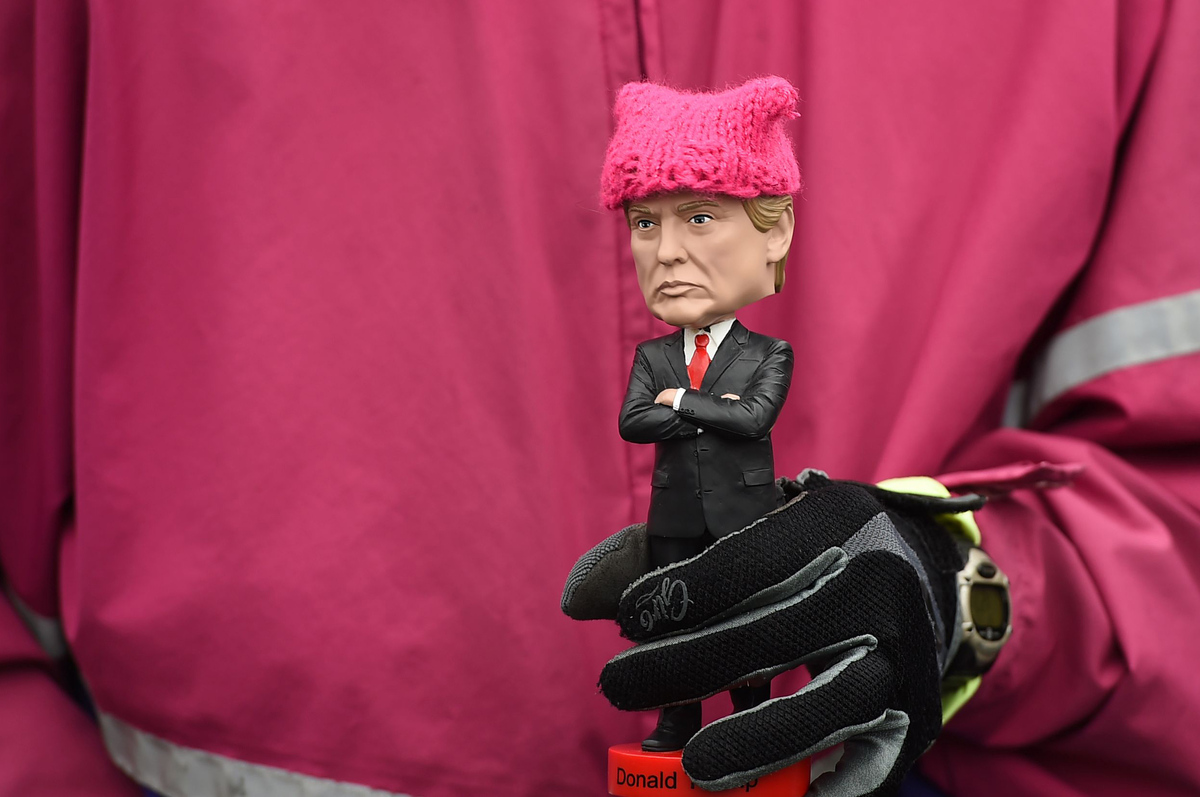 A protester holds a Donald Trump bobble-head donned with a tiny pink "pussy hat" during Saturday's march in D.C.

But the hats were intended also to be unifying for women (and the men who came to support the march). Following an election where Donald Trump effectively used masculinity as a campaign strategy, the pussyhats are unabashedly feminine, in that they are pink and homemade (not to mention that they reference a derogatory term for the female anatomy). That's by design: the "Pussyhat Project" website explains that "knitting and crochet are traditionally women's crafts," adding, "[knitting] circles are powerful gatherings of women."

The similarities don't end there. Both hats represent a kind of backlash: one by a group of people who believed they were ignored political outsiders, and the other by people who recently suffered a stinging election defeat. 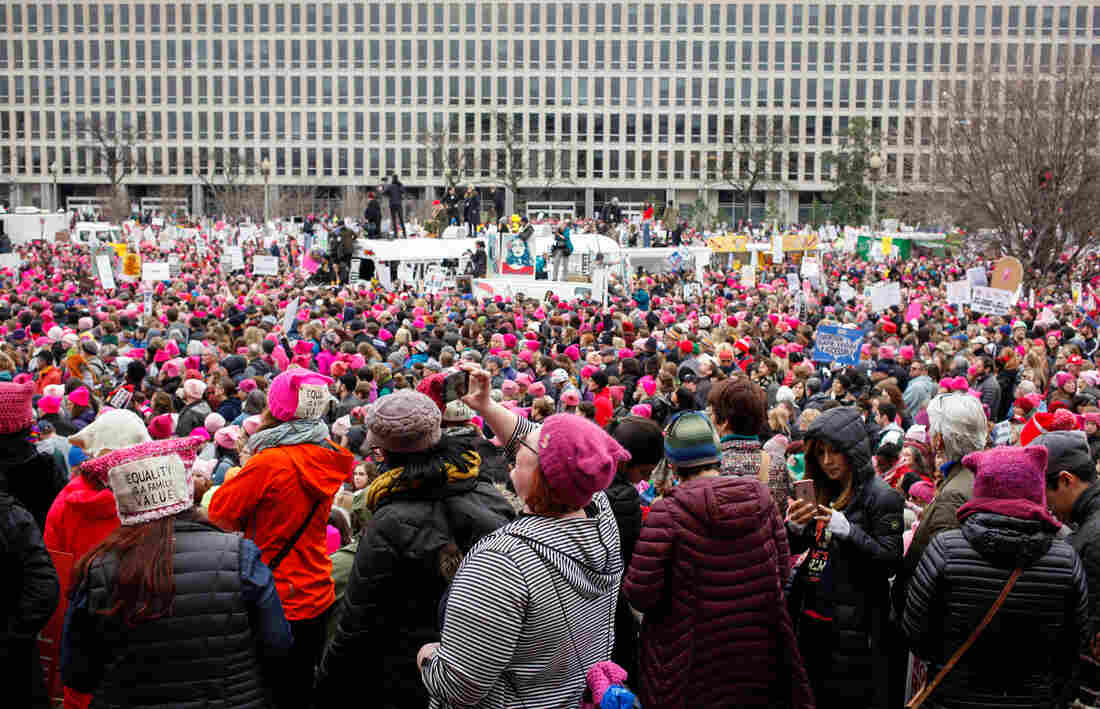 Maryland Avenue was awash with pink between the Smithsonian's Air and Space Museum and the U.S. Department of Education at the Women's March on Washington. Meg Kelly/NPR hide caption

In addition, simplicity is arguably a central goal of both hats, albeit to different ends. The Trump hat's plain red background with white Times New Roman lettering "represented [an] everyman sensibility," as FastCo Design's Dianna Budds explained this year. Likewise, most pussyhat patterns are simple — one article promised viewers they could learn how to sew a hat "in the time it actually takes to ironically watch The Bachelor" — allowing some crafters to crank out and distribute many.

While the red caps and pink knit hats invite comparison, they aren't perfect analogues of each other; the homemade pussyhats, in shades ranging from fuchsia to powder pink to mauve (and a few that weren't pink at all) — were naturally not as uniform as the mass-produced Trump hats.

Again, the Pussyhat Project characterizes that as a feature rather than a bug, allowing people to be unique and diverse in their designs. (Likewise, the homemade hats helped people connect with one another — marchers on Saturday reported getting hats from their grandmothers, wives, state legislators, and even strangers on the street.)

Importantly, though, the pussyhat has a long way to go to reach the power that the Trump hat has. Extolling the red trucker hat as the "symbol of the year 2016," Davies wrote about what made it stick. 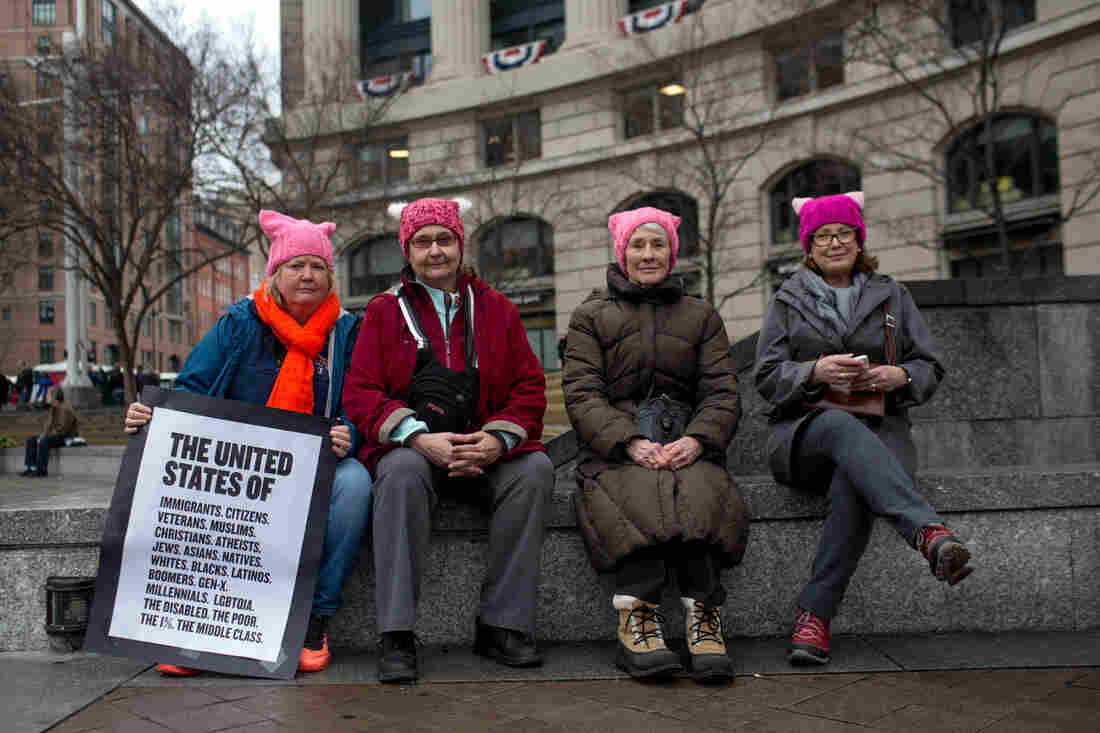 "Lots of things can be symbols," he said. "but relatively few things actually are. Being a symbol is an acquired status that gets established through use."

The pussyhats could simply become a memento for marchers, as opposed to something they continually wear. After all, Trump rallies gave supporters regular reasons to get together and don their hats, eventually making the caps familiar to many Americans. The pink hats very easily might never reach that point.

At least for now, the pussyhats and trucker hats fulfill the basic role of identifying tribes. Saturday afternoon, red-hatted families ate in restaurants alongside pink-hatted marchers. Without even talking, they knew exactly which team they were on.