In President Trump's inaugural address, he promised an "America First" vision of government. Former Republican adviser Pat Buchanan, who also used the phrase, talks about what to expect.

GARCIA-NAVARRO: President Trump used that phrase during the campaign to define his approach to foreign policy. But in his inauguration address, he applied it more broadly to trade, taxes and immigration as well. And it's a philosophy that our next guest shares. Pat Buchanan served as an adviser to three Republican presidents and ran for president a few times himself.

Welcome to the program, sir.

PAT BUCHANAN: Hi, Lulu. How are you?

GARCIA-NAVARRO: I want to focus on foreign policy for a moment. President Trump said that the U.S. should seek friendship with other nations but should also understand that every country has the right to, quote, "put their own interests first." How would that approach, in your view, refocus American policy?

BUCHANAN: There has been sort of, if you will, a moral interventionism on the part of the United States trying to reshape countries in our own image. Now, we had to go into Afghanistan. We didn't have to go into Iraq. But the idea that you could create a Vermont in the Middle East like that was naive from the beginning.

In other words, nations decide upon their own destinies, and those choices are not the business of the United States if they do not threaten the United States. For example, we have Mr. Putin in Russia. And he appears to be a popular president of Russia. And I don't think it's the business of the National Endowment for Democracy or American diplomats or American foreign policy to try to change the nature of that government.

GARCIA-NAVARRO: But America first seems to mean, some would interpret, giving up global influence, giving up being a superpower.

BUCHANAN: No, it does not. What America first means is we put the national interests of the United States and the well-being of our own country and our own people first. Our foreign policy, first and foremost, should be focused on the defense of American freedom, security and rights. That, of course, can entail, given the nature of the world, alliances with Great Britain. And during the Cold War, all of us supported the NATO alliance.

But when you have a situation where the Soviet Union disappeared, worldwide communism has disappeared, do you really need the same alliance we needed in 1956? Lulu, does anyone think that all 28 or 29 NATO countries would go to war if the Russians move back into Estonia? Should they? Should we have a nuclear war over issues like that, or should we really be confronting Russia in eastern Ukraine, for heaven's sakes?

GARCIA-NAVARRO: But sir, taking that off the table, saying that we will not get involved, that we will not stand by our allies, many argue it makes the world a more volatile, dangerous place because it encourages countries like Russia to make actions that might destabilize an entire region.

BUCHANAN: Well, there's no doubt that an American guarantee to go to war on behalf of however many countries we are committed to now - 28 some in NATO, you've got the South American countries. You got South Korea, Japan. You had Taiwan. You have the Philippines. The point is, the world has changed, and the United States needs to change with it. We cannot commit to go to war on behalf of 50 countries around the world because that is the formula that is one day going to break down and break out into war.

GARCIA-NAVARRO: I want to discuss the phrase America first.

GARCIA-NAVARRO: You know, one historian at CNN described it as the legacy of a, quote, "isolationist, defeatist, anti-Semitic national organization that urged the United States to appease Adolf Hitler." She's referring, of course, to the America First Committee, which opposed World War II. You used it in your campaigns. Donald Trump is now using it as well. Is this really the slogan of our times with such a troubled history?

GARCIA-NAVARRO: It doesn't mean it's not a discredited organization?

GARCIA-NAVARRO: Not in mine. I'm asking.

BUCHANAN: Well, not in my eyes. I would not have used the slogan if it were some slogan which - to me, it is an honorable group of American patriots who wanted to keep us out of the insane World War II where the British and German - all of them were killing one another - as we had mistakenly gotten into World War I and gotten all those Americans killed so that the European empires could expand.

GARCIA-NAVARRO: So there's no war worth fighting in your view? You think Donald Trump, as the new president...

BUCHANAN: There was a war worth fighting, the American Revolution.

GARCIA-NAVARRO: As the American president, your advice to him would be to not get entangled in any foreign conflicts?

BUCHANAN: I would certainly - as I - I told President - or told President Bush - I started a magazine, 2002, along with two other patriotic fellows to keep the United States out of Iraq. We implored him not to go to Iraq. Don't march up to Baghdad because when we get there, we're going to meet some of the other imperialists who've gone before us. That was the greatest diplomatic disaster in my lifetime and perhaps in American history. And it had gotten us involved in a Middle East where it's - there's constant bloodshed going on and no resolution. That was a horrible mistake. People who stand up against wars aren't necessarily always wrong.

GARCIA-NAVARRO: Pat Buchanan is the editor of The American Conservative. Thanks so much for being with us.

BUCHANAN: It's a pleasure, Lulu. 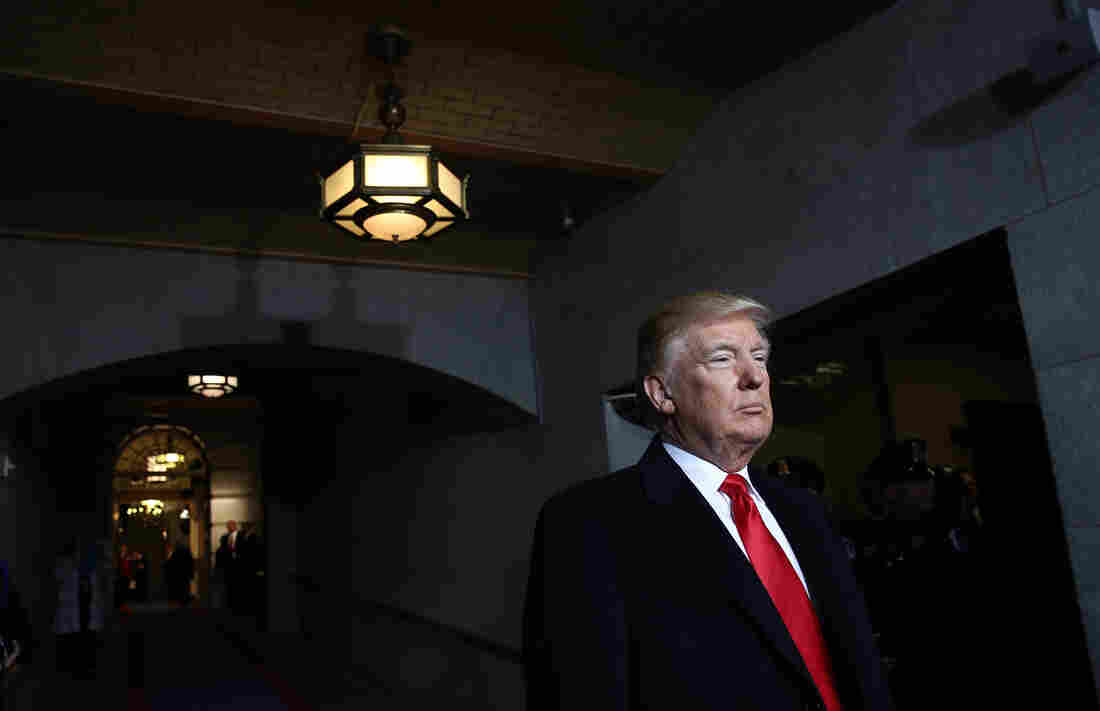 Donald Trump arrives on the West Front of the U.S. Capitol on Friday to take the stage for his inauguration ceremony. Win McNamee/Getty Images hide caption

Donald Trump had already emerged as the likely presidential nominee of the Republican Party back in April when he gave a foreign policy speech pledging that "America First" would be "the major and overriding theme of my administration."

It was a phrase guaranteed to prompt a reaction. Surely the two words sounded good together, but where had we heard them together before? And then, once again, the phrase stood out on Friday — front and center in President Trump's inaugural address:

As a businessman, Trump has been famous for nothing so much as his penchant for brand-building and promotion. As a candidate, he rediscovered a slogan others had used (Ronald Reagan's 1980 campaign had buttons that said "Let's Make America Great Again") and made it his own.

He now appears to be doing something very similar with "America First," a battle cry with more than a little history behind it. Assuming he is aware of at least some of that history, Trump is demonstrating his confidence that his adoption of a phrase can supersede its past. 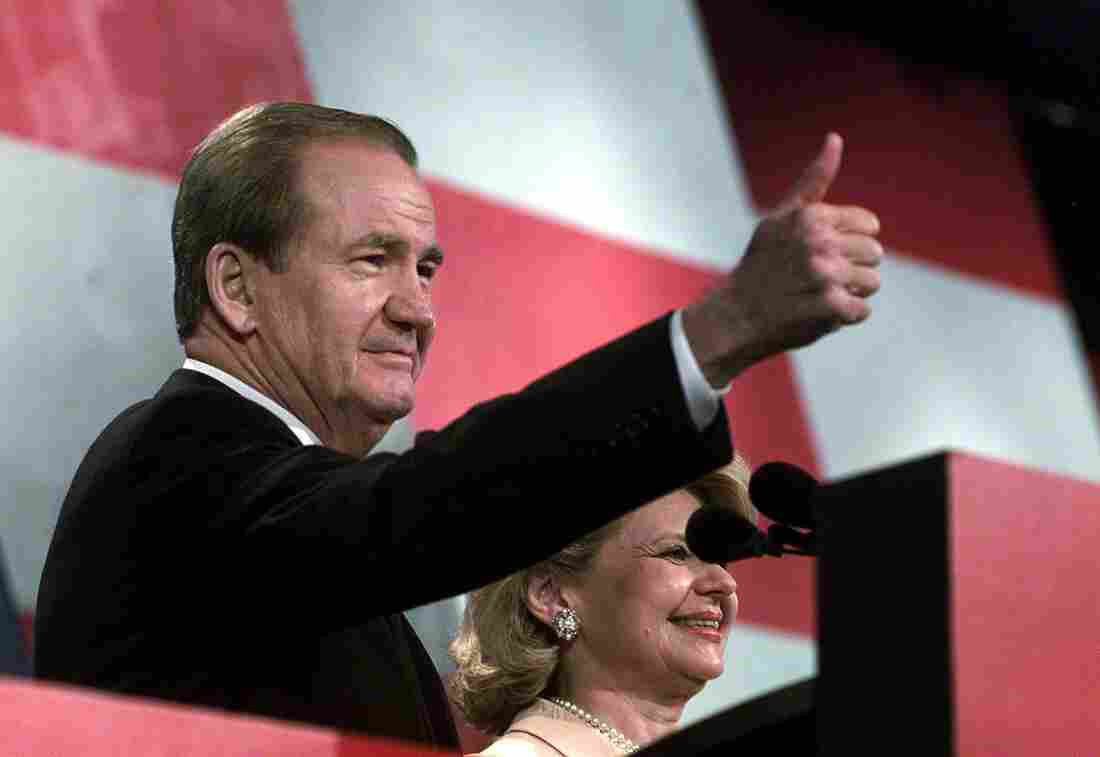 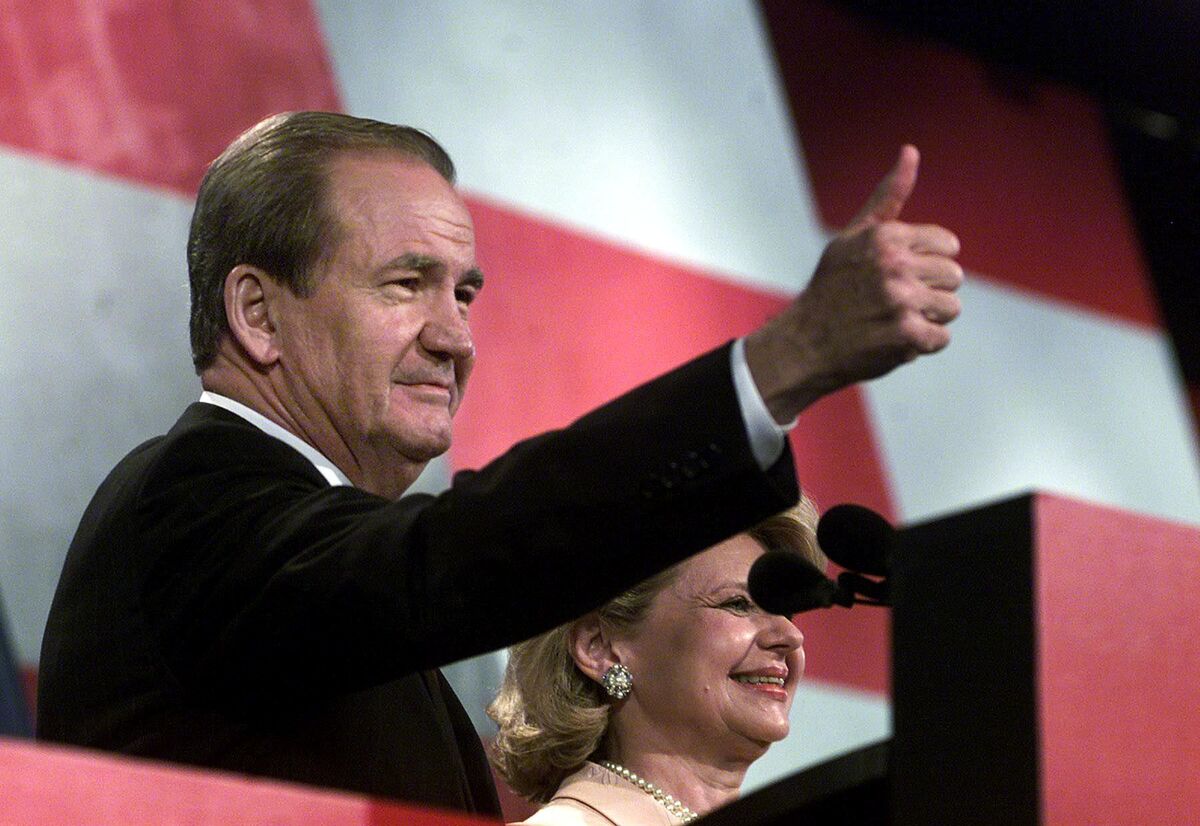 Reform Party presidential candidate Pat Buchanan, flanked by his wife Shelly, gives the thumbs-up to supporters after his speech at the Reform Party National Convention in Long Beach, Calif. in August 2000.

The phrase made an appearance with an exclamation point ("America First!") as the slogan of Pat Buchanan's presidential campaign in 2000. Buchanan had been an aide to Reagan and a speechwriter for Richard Nixon and sought the Republican nomination for himself twice in the 1990s. But in the millennial year, Buchanan shifted his attention to the Reform Party.

Along the way, Buchanan proposed pulling out of the World Trade Organization, the International Monetary Fund and the North American Free Trade Agreement (NAFTA), in addition to opposing military intervention overseas.

Trump, too, briefly sought the 2000 Reform Party nomination. In an interview on NBC's Meet the Press, Trump alluded to a book Buchanan had written arguing that the U.S. was beguiled by Great Britain into opposing Adolf Hitler's Nazi Germany in World War II. (The book was titled: Churchill, Hitler and the Unnecessary War.) 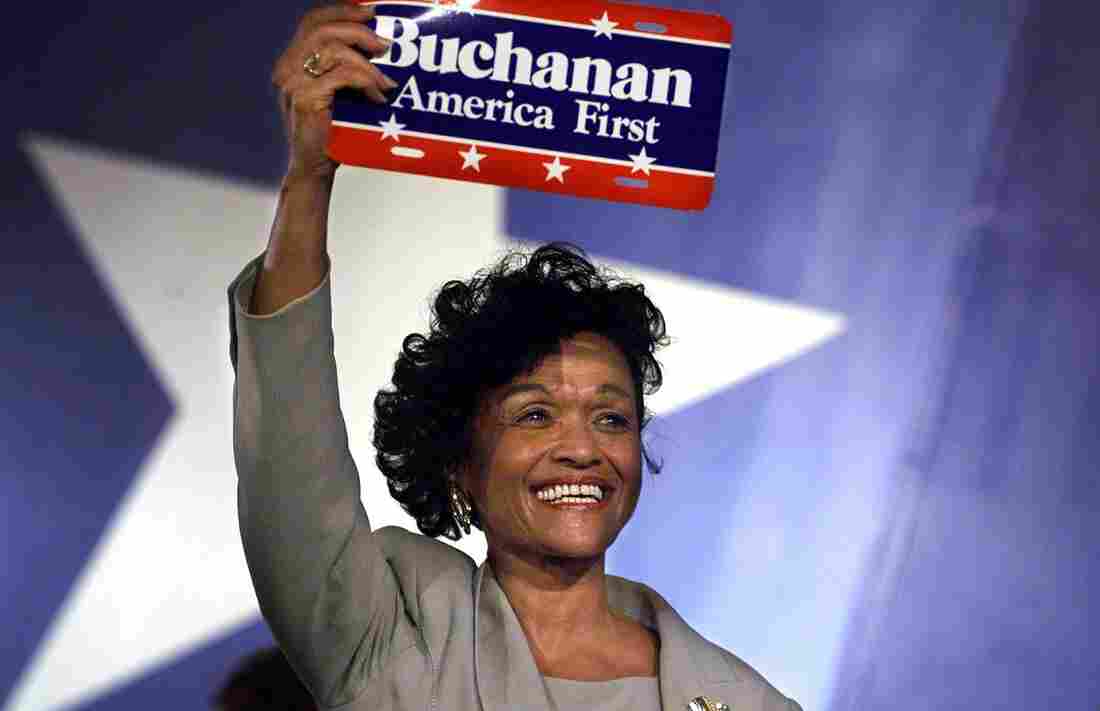 Trump told NBC's Tim Russert that Buchanan was "a Hitler lover" and the choice of "the really staunch-right wacko vote."

For many, Buchanan's isolationism and revisionist views of World War II harked back to the America First Committee, the largest national organization opposing U.S. involvement in World War II prior to the Japanese attack on Pearl Harbor. Formally organized by students at Yale in 1940, it attracted a wide variety of activists and was bankrolled by several major corporate leaders. Automaker Henry Ford was on its board for a time.

Most in the AFC wanted to avoid seeing the U.S. drawn into the European war the way it had been dragged into World War I in 1917. But some of the group's leading lights also saw efforts to involve the U.S. against Nazi Germany as a plot led by the British and by "the Jewish races" — a phrase used by the AFC's most famous spokesman, Charles Lindbergh, the aviator-cum-national hero. 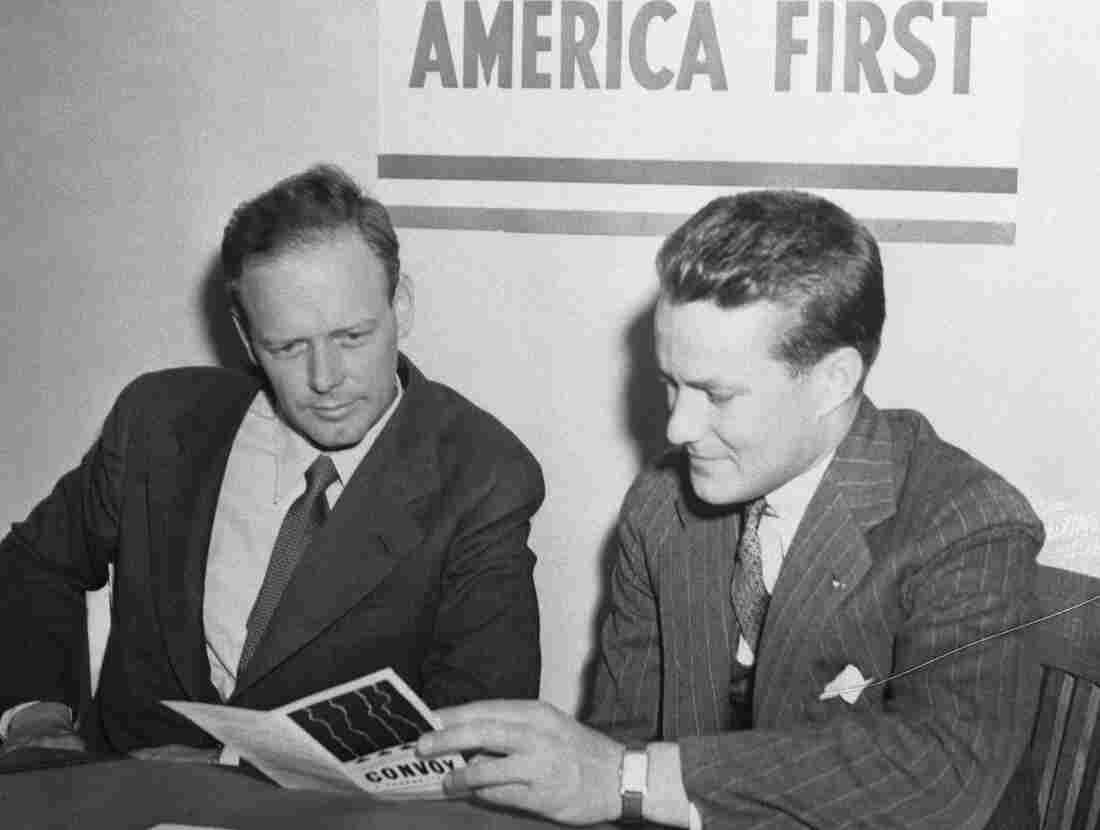 Col. Charles A. Lindbergh (left) with R. Douglas Stuart, Jr., National Director of the America First Committee, when the aviator enrolled in Chicago as a member of the AFC. Bettmann Archive/Getty Images hide caption 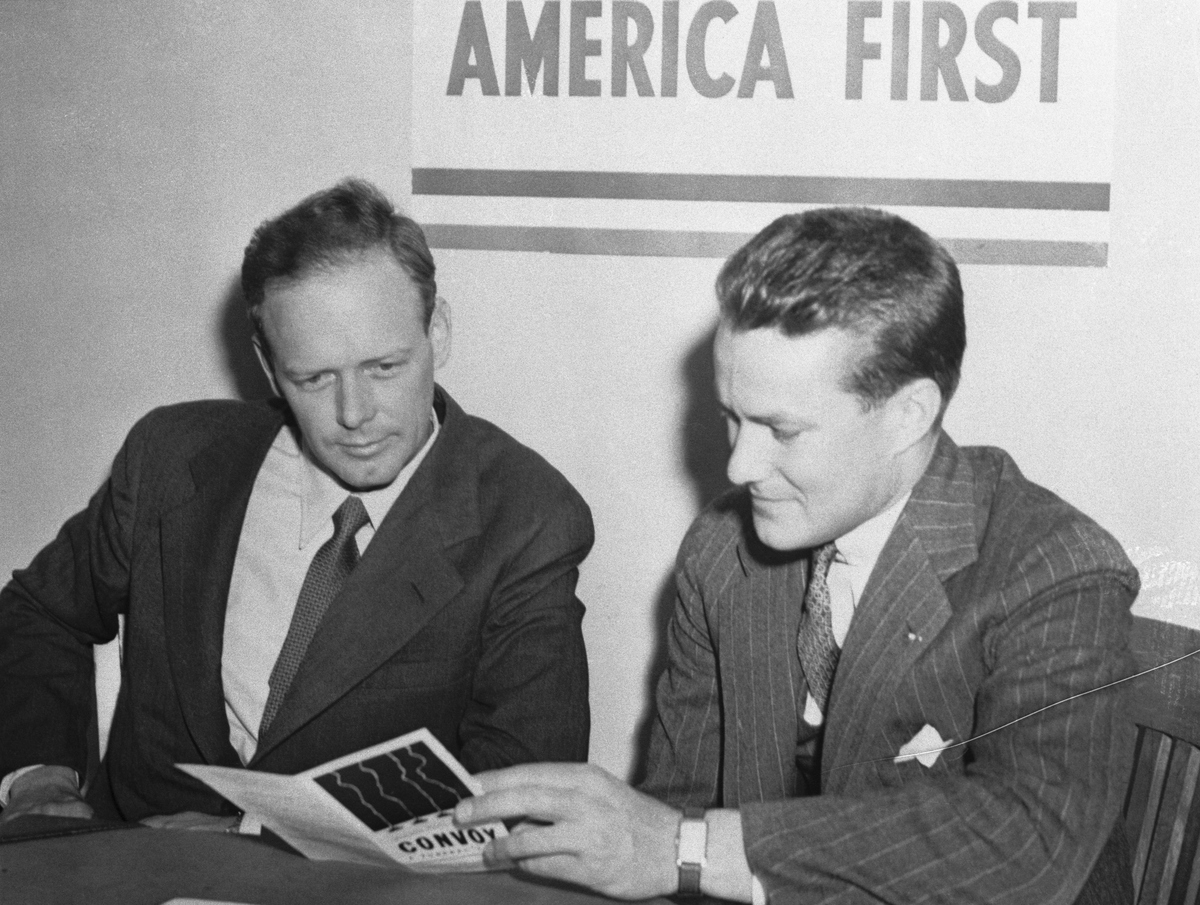 Col. Charles A. Lindbergh (left) with R. Douglas Stuart, Jr., National Director of the America First Committee, when the aviator enrolled in Chicago as a member of the AFC.

In April of this year, Williams College professor Susan Dunn wrote for CNN that it was "extremely unfortunate" that Trump "chose to brand his foreign policy with the noxious slogan 'America First,' the name of the isolationist, defeatist, anti-Semitic national organization that urged the United States to appease Adolf Hitler."

The AFC, and opposition to entering World War II, all but vanished after Pearl Harbor, and Lindbergh retreated from public life. But some of the AFC's other major figures later emerged as born-again internationalists, supporting the United Nations and other forms of global cooperation.

While the AFC was the most prominent promulgator of "America First" in memory, it was not the first: The phrase had gained political cachet during World War I as well.

In 1916, Woodrow Wilson was struggling to win a second term in the White House, and he was no better than an even bet against Republican challenger Charles Evans Hughes.

The Great War was raging on the Continent, and Wilson leaned toward helping Great Britain and France. But such an alliance was vigorously opposed by many Americans — especially German and Irish immigrants and their descendants.

Wilson ran on a platform of strict neutrality. His most famous slogan was "He kept us out of war," a boast that would turn ironic when he asked Congress for a declaration of war just a month after his second inauguration. But the 1916 Wilson campaign also used the theme "America First" on printed flyers and posters, tapping into national pride as well as isolationist sentiment.