Accessibility links
How A Work Of Art Makes It Onto The Wall Of The White House Former First Lady Jacqueline Kennedy once said, "Everything in the White House must have a reason for being there." So we looked behind the scenes to learn how art is chosen for 1600 Pennsylvania Ave. 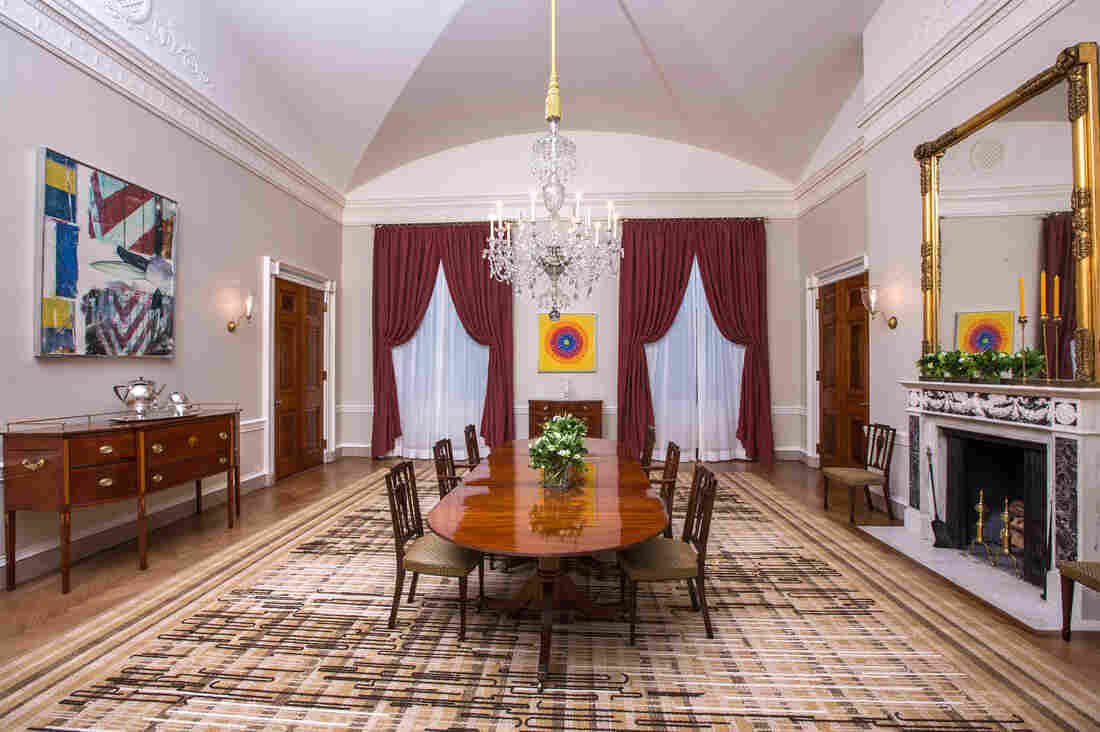 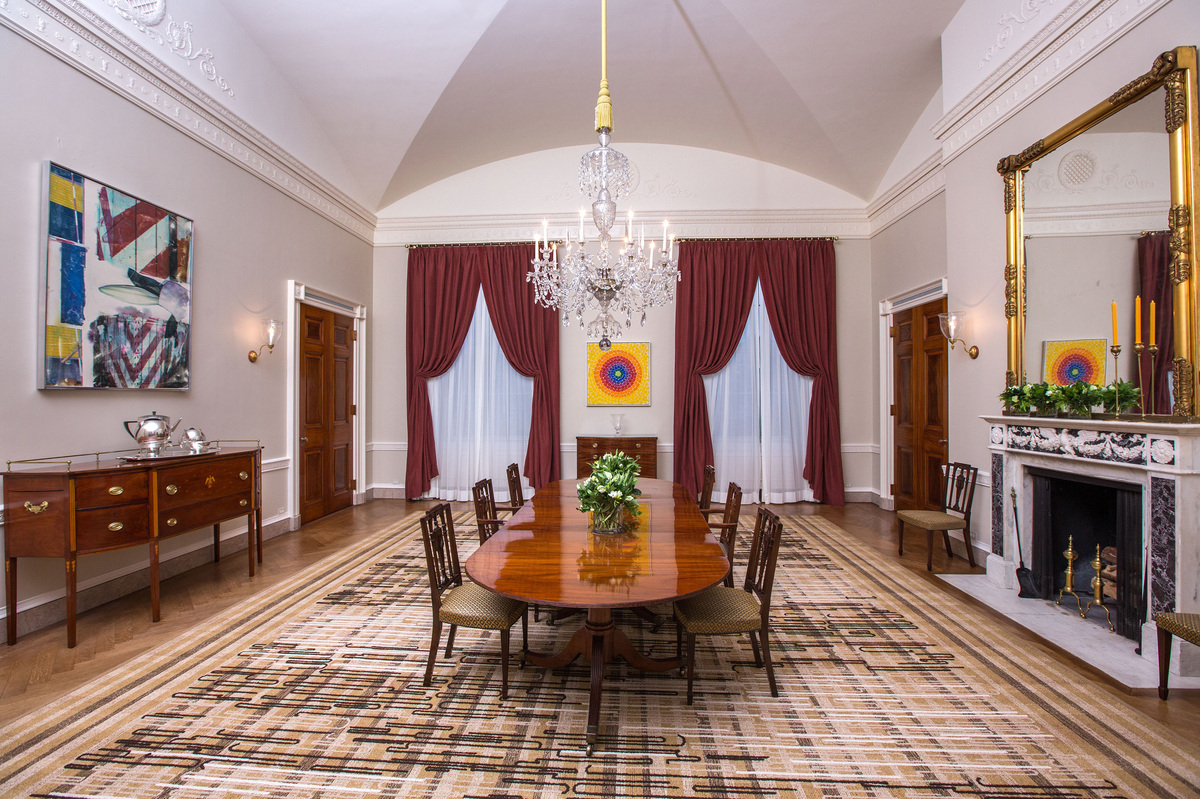 On his first day on the job, President Trump made some changes to the Oval Office; he installed gold drapes and moved some statues. First Families have some leeway to make changes to the White House, and that includes changes to its art collection.

It can take many hands — or eyes — for one work of art to make it into the White House. Take, for example, the large painting the Obamas hung in what's called the Treaty Room.

"It's an unbelievably energetic, beautiful sort of thing, in which a black horse whose body is only somewhat defined is seen running across a kind of crimson field," says curator Mark Rosenthal.

Titled Butterfly, the painting is one of a series of horse paintings by American painter Susan Rothenberg. Rosenthal had admired it since the mid-1970s, and when he became a curator at the National Gallery of Art 20 years later, he remembered the painting and set out to acquire it. But for that, he needed money. So he convinced Texas donors Nancy and Perry Bass to purchase it for the museum. 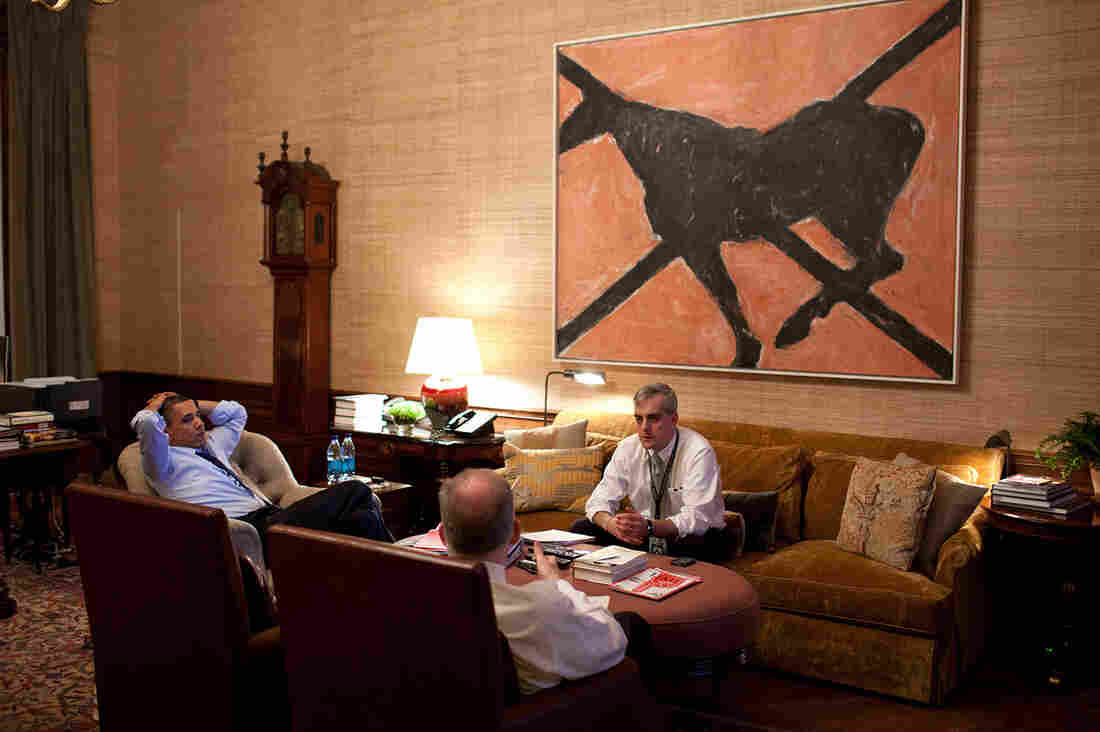 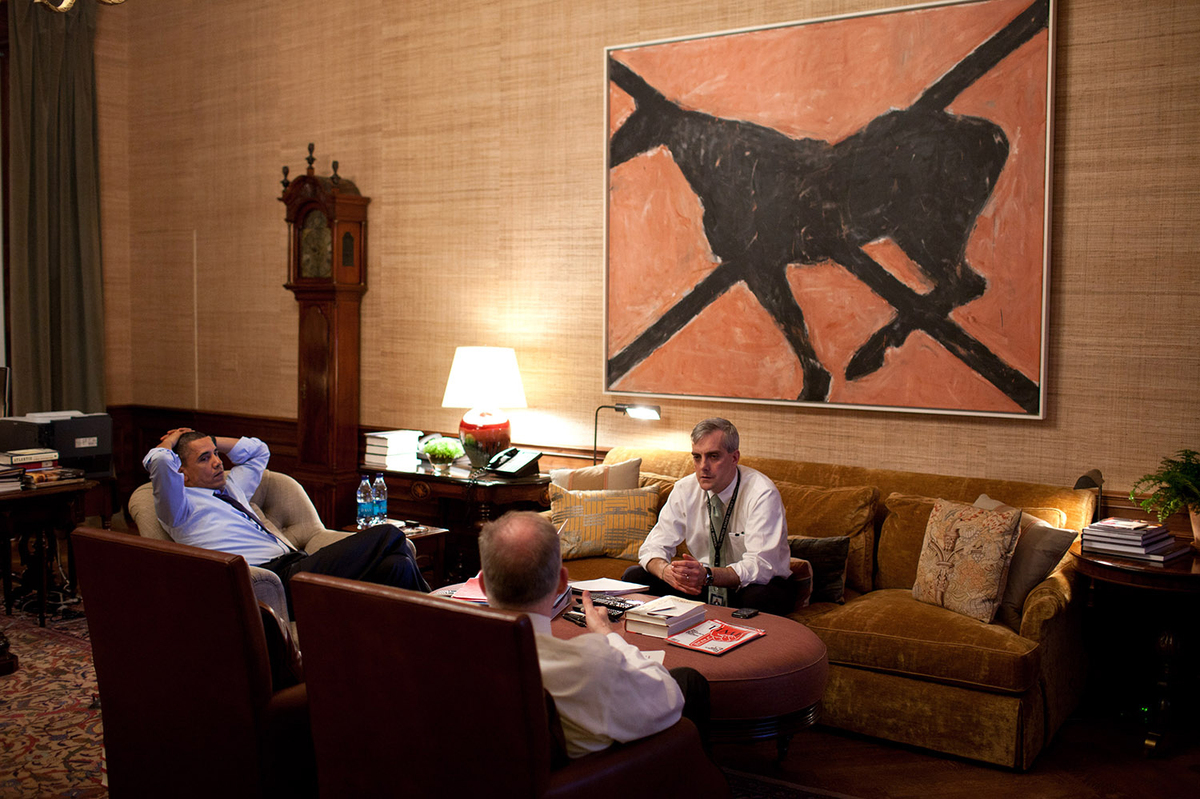 "I had met them once or twice — barely knew them," Rosenthal says. But what he did know was that they were "revered conservationists."

Rosenthal thought the picture of the horse might speak to them. It did, and the painting entered the National Gallery's collection.

So how did the painting end up in the private quarters of the White House nearly 15 years later? The National Gallery's current staff preferred not to be interviewed. But Rosenthal says, typically, the new first family sends someone there, and to other museums, to pick out art for their private living quarters.

"It might be a friend, it might be a decorator ... but it was someone designated by the president and first lady to come to the National Gallery of Art and choose work ... " Rosenthal explains. "It's very much [like] a kid in a candy store."

When it comes to the public spaces in the White House, the rules are different. In the early 1960s, First Lady Jacqueline Kennedy helped bring some order to the process of how art should enter the White House and be paid for. For decades, it was pretty haphazard, says art historian William Kloss.

"In the 19th century in particular, one of the ways Congress had to express their unhappiness with a particular administration incoming was to give them little or no funding for new furniture or new rugs or anything that was needed," Kloss explains. "So on more than one occasion, they held a big sale on the White House lawn so they could raise funds for new furnishings."

Today, those funds come from The White House Historical Association, a non-profit that raises money from private donations and the sale of merchandise such as books and Christmas ornaments.

For The Holidays, The Obamas Open Up The White House One Last Time

Former White House curator Betty Monkman started out at the White House in 1967, a few years after President Lyndon Johnson signed an executive order establishing the curator position. She says the goal is to collect work by and about Americans, and there were gaps in the collection.

"We only had copies of a lot of 19th century paintings," Monkman says. She was always on the lookout at auctions for rare life portraits of people like John and Abigail Adams. ("Which we still have not acquired because there are so few of them out there," she says.)

As curator, she was also looking for paintings that represented the nation's different regions. A New Mexico gap, for example, was filled in during the Clinton administration with a painting by Georgia O'Keeffe. 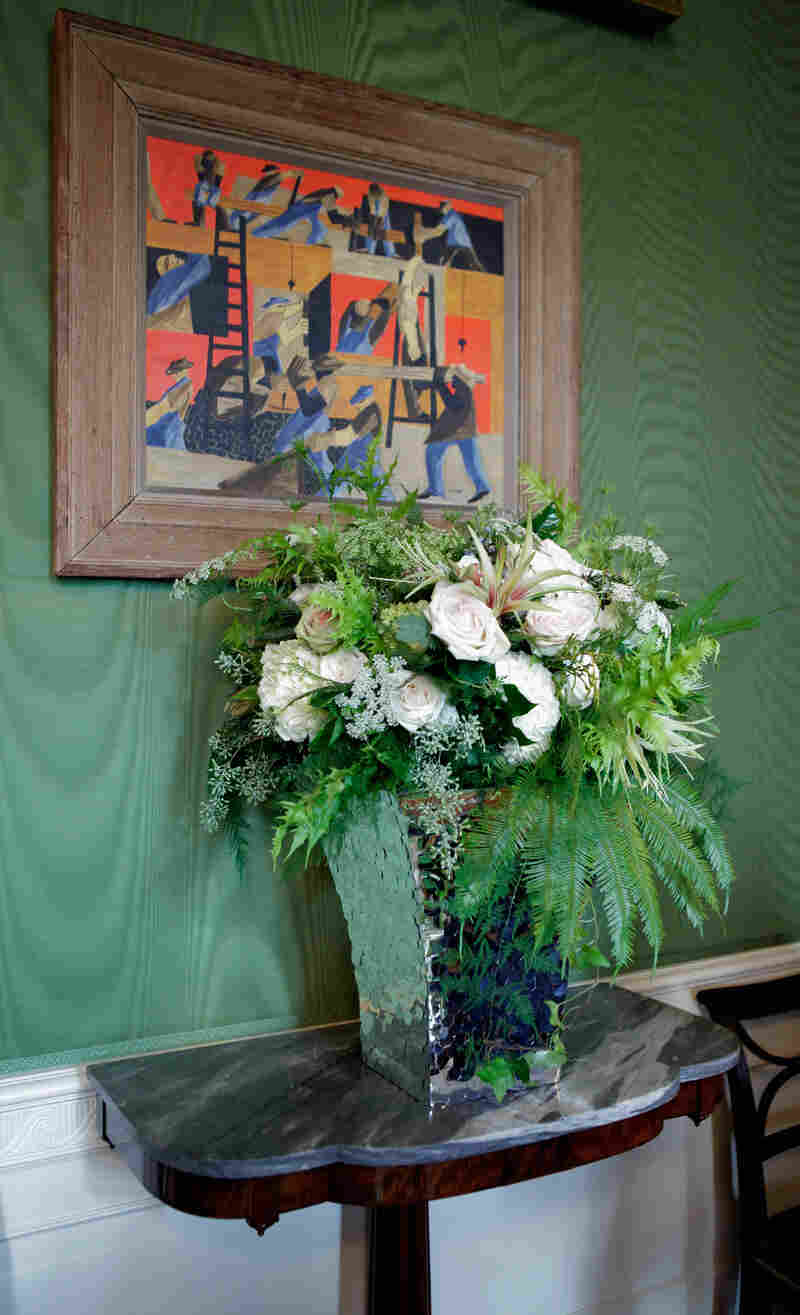 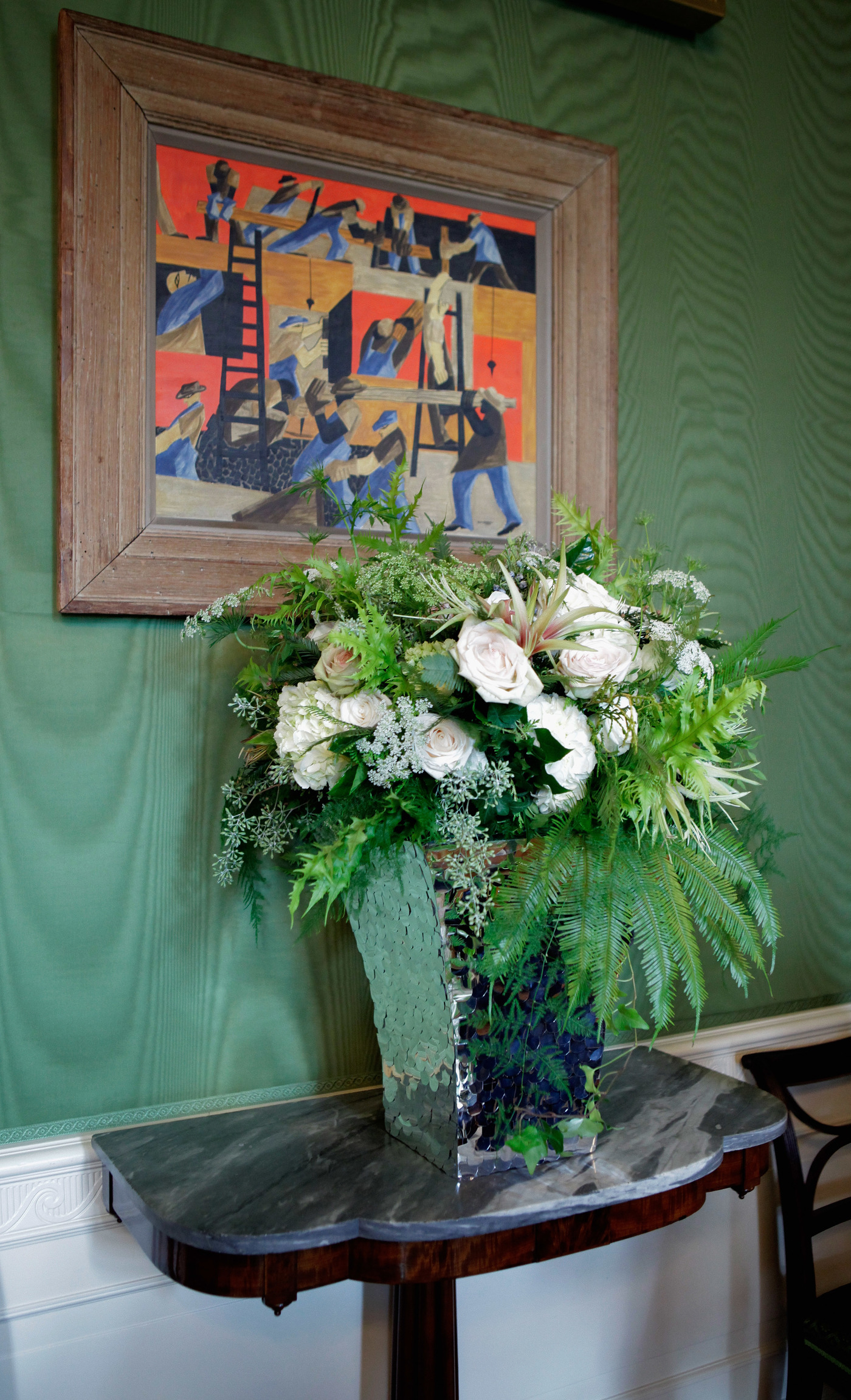 Laura Bush acquired The Builders by Jacob Lawrence for the Green Room.

In 2008, Bush told C-SPAN that the White House should showcase American traditions, but also stay relevant.

It's too soon to say what impact Donald and Melania Trump will have on the White House art collection. But former curator Mark Rosenthal says these decisions are worth watching.

"What a person or family chooses to live with is incredibly telling about their openness to visual experiences," he says. "One ought to be expanding one's horizons all the time."

The White House is actually an accredited museum, with a curatorial staff and a committee dedicated to its preservation. So if the Trumps do decide to add to its collection, they'll have plenty of help.