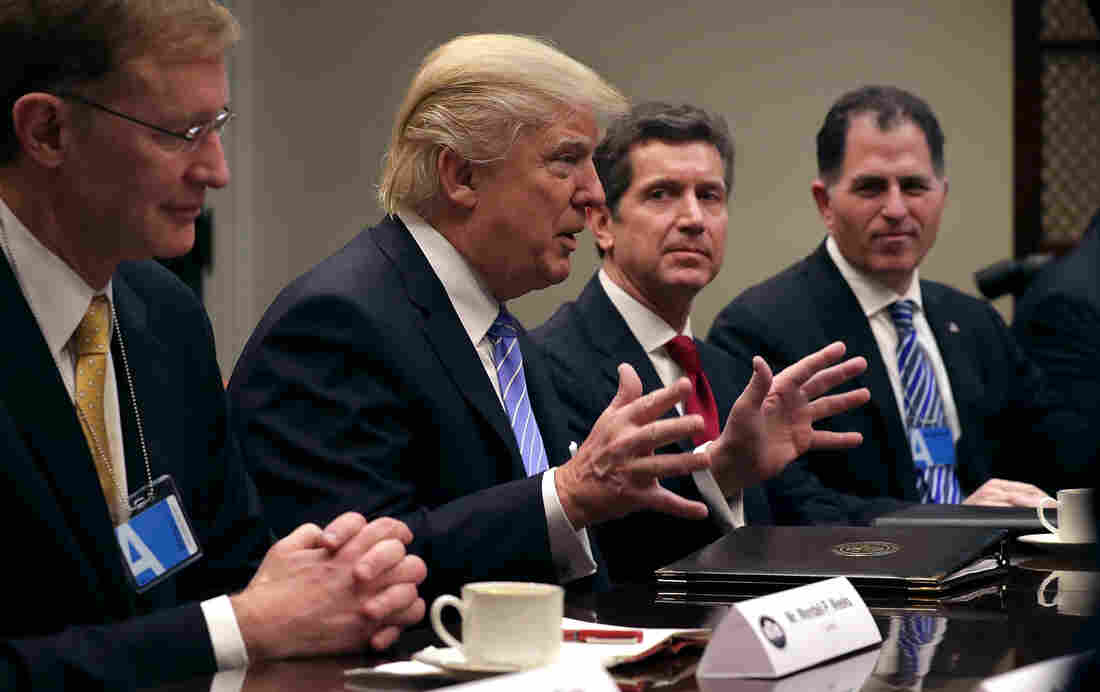 President Trump delivers opening remarks during a meeting with (from left) Wendell Weeks of Corning, Alex Gorsky of Johnson & Johnson, Michael Dell of Dell Technologies and other business leaders in the Roosevelt Room at the White House on Monday. Chip Somodevilla/Getty Images hide caption 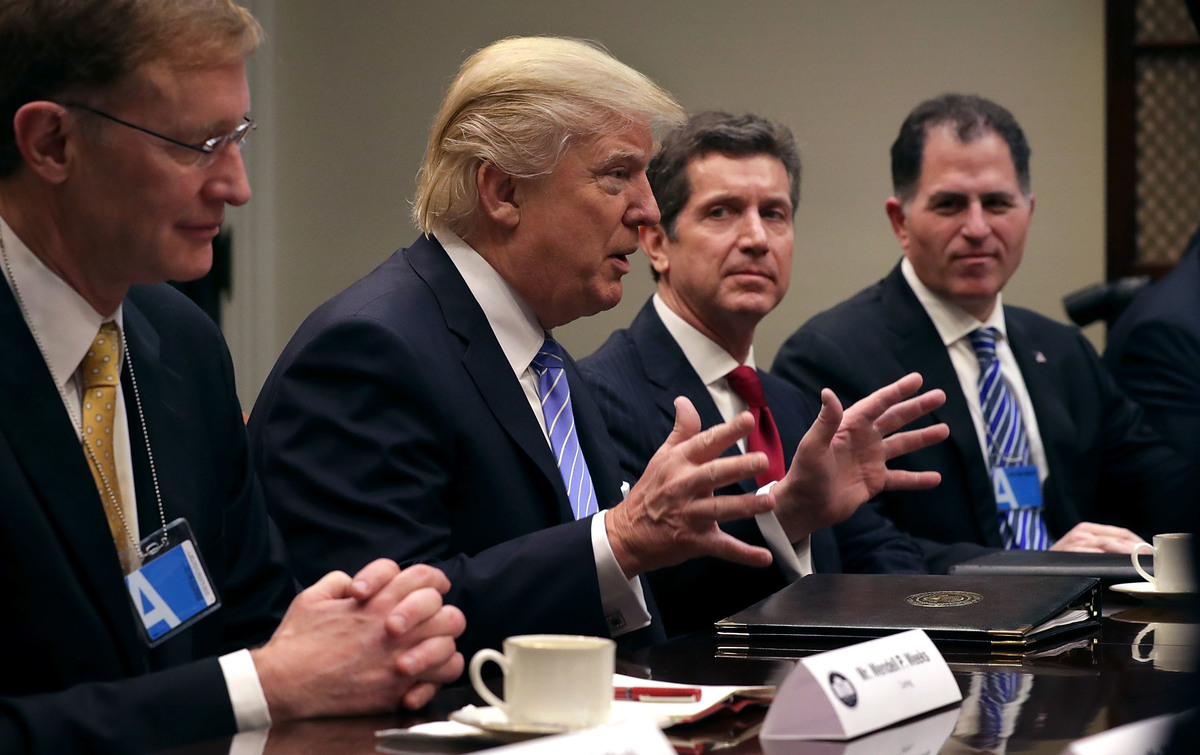 President Trump delivers opening remarks during a meeting with (from left) Wendell Weeks of Corning, Alex Gorsky of Johnson & Johnson, Michael Dell of Dell Technologies and other business leaders in the Roosevelt Room at the White House on Monday.

But he also reiterated his threat to impose a border tax on companies that move jobs overseas — a plan with little support from the president's fellow Republicans in Congress. Trump said he hopes to hold similar meetings with business leaders on a regular basis, perhaps quarterly.

"We'll get to know each other very well," he told executives, including CEOs from Ford, U.S. Steel, Dow Chemical and Under Armour.

The president renewed his campaign promise to reduce the top corporate tax rate from 35 percent to 15 or 20 percent. He suggested that for many businesses, a reduction in government regulation would be even more valuable.

"The problem with the regulation that we have right now is that you can't do anything," Trump said. "It's out of control. It's gotten out of control."

The incoming administration has already ordered a freeze on new government regulations. Eventually, Trump said he'd like to eliminate about three-quarters of the existing rules. He argued that it's possible to do that while still safeguarding workers and the environment.

"I'm a very big person when it comes to the environment," Trump said. "But some of that stuff makes it impossible to get anything built."

Trump sees both tax cuts and regulatory relief as ways to make doing business in the United States more attractive.

"What we want to do is bring manufacturing back to our country," he said. "It's what the people wanted. It's one of the reasons I'm sitting here instead of somebody else sitting here."

The United States has about 5 million fewer manufacturing jobs today than it did in 2000. The decline of high-paying factory jobs contributed to Trump's victory in Rust Belt states such as Pennsylvania, Ohio and Michigan.

Economists say most of the jobs losses result from automation, which allows American factories to churn out more products with fewer workers. But Trump tends to highlight labor-intensive factory work that's relocated to low-wage countries such as China. He once again promised to punish American executives who shift jobs overseas.

"A company that wants to fire all of its people in the United Sates and build some factory someplace else, and then thinks that that product is just going to flow across the border into the United States, that's not going to happen," Trump said. "They're going to have a tax to pay, a border tax."

"Some people would say that's not free trade," he added. "But we don't have free trade now," pointing to barriers that other countries often erect to block U.S. imports.

Congressional Republicans have been cool to Trump's call for a border tax, which would complicate international supply chains and raise prices for U.S. consumers. But Trump told American business leaders there's a simple alternative.

"All you have to do is stay," he said. "Don't leave. Don't fire your people in the United States."