Accessibility links
Sean Spicer's Dippin' Dots Tweets Put Press Secretary On The Spot Recently discovered tweets show Sean Spicer has been at odds with the "ice cream of the future" for years. On Monday, Dippin' Dots tried to end the feud with a letter asking to be friends. 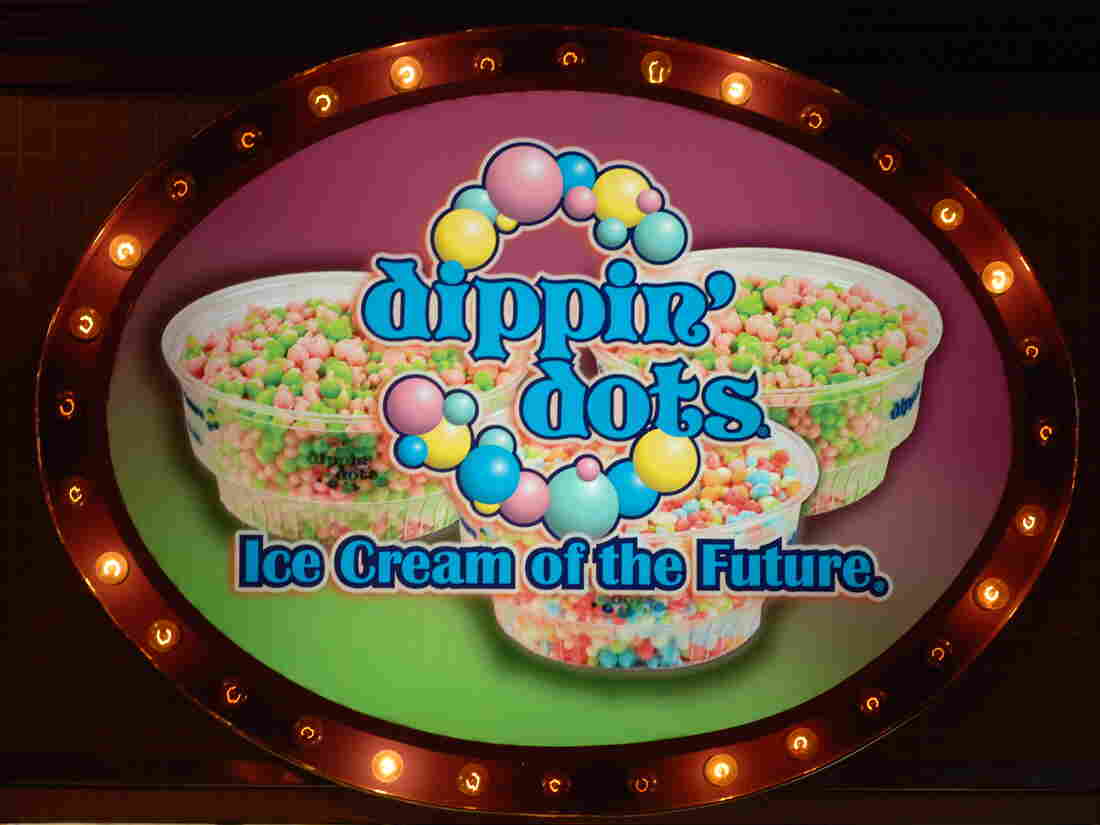 A staple of ballparks and malls, Dippin' Dots has billed itself as the ice cream of the future. Travis Nicholson/Flickr hide caption 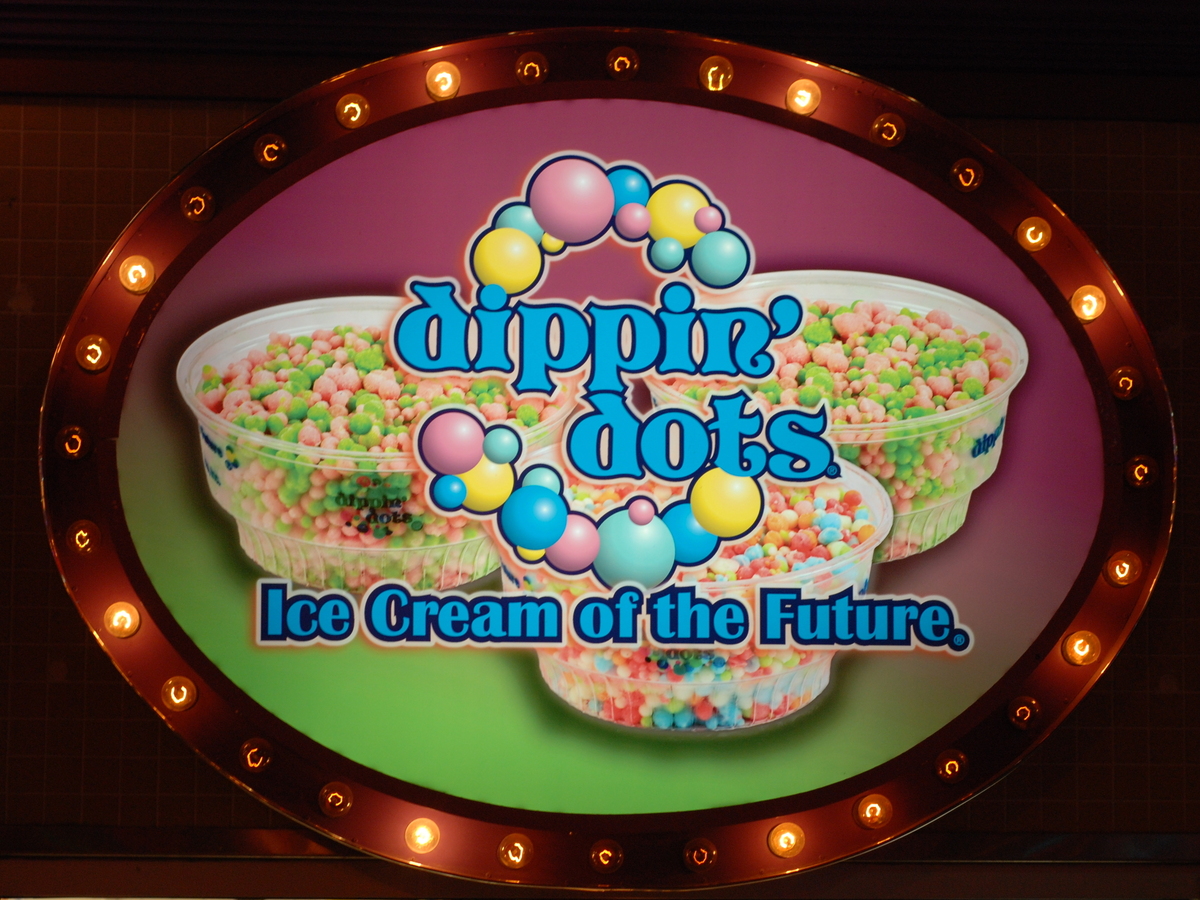 A staple of ballparks and malls, Dippin' Dots has billed itself as the ice cream of the future.

Dippin' Dots describes its product as "an unconventional ice cream treat that's remarkably fresh and flavorful, introducing the world to beaded ice cream" and "the original and unbeatable flash-frozen ice cream sensation." Donald Trump's press secretary, Sean Spicer, disagrees. For years, he has mocked the company and its "ice cream of the future" on Twitter.

we may not have inauguration attendance data yet, but one set of record turnout numbers are in:

In tweets from 2010 and 2011, Spicer said Dippin' Dots was not the ice cream of the future. In 2011, Spicer also tweeted a link to a Wall Street Journal article about the company's bankruptcy, and in his caption described Dippin' Dots as "Ice Cream of the Past." In September 2015, Spicer complained, "If Dippin Dots was truly the ice cream of the future they would not have run out of vanilla," tagging the Washington Nationals baseball team in an apparent to reference a shortage of vanilla Dippin' Dots at Nationals Park.

Since Spicer assumed the role of White House press secretary, these tweets have been making the rounds on the Internet, enough so for Dippin' Dots to write an open letter to Spicer, asking to "be friends rather than foes" and offering an ice cream social to the White House and White House press corps.

Late Monday night, Spicer did tweet the following response to Dippin' Dots' offer of an ice cream social: "Sorry for the delay How about we do something great for the those who have served out nation & 1st responders"

Sorry for the delay How about we do something great for the those who have served out nation & 1st responders https://t.co/G9BPmVAXKS

Since that letter's release, NPR reached out to Dippin' Dots for further comment on the feud. Here's what Billie Stuber, media relations manager for Dippin' Dots, and Shama Hyder, who handles marketing for the company, told us (questions and answers have been edited for clarity):

When did Dippin' Dots realize that Sean Spicer had a beef with them?

Billie Stuber: [Laughter] Well, it was a bit of a surprise. We're not used to beef. We're friends with everyone. So we noticed [Sunday] some of his old tweets began to resurface and circulate.

What was your thinking?

Stuber: I scratched my head a little bit at first, and I thought, "Really?" And I had to look back and I thought, "Yeah, that really is seven years old." First we kinda watched. ... And then as more folks started to talk about it ... we began to get our brainpower all together and think about how we wanted to respond.

Whose idea was the open letter?

Shama Hyder: As Billy mentioned, Dippin' Dots tries to stay very out of the political scene, because the consumers are across the board. ... Ice cream is probably the least political of things you can find. It's about making friends and not foes. ... The open letter isn't just to Sean Spicer; it's really to the customers as well. This is what Dippin' Dots stands for. We're really about building a brand that's inviting, that's encompassing. And when the customers say, "Hey, we want to hear from you," they want to hear from us.

Was there any fear of being caught up in politics? Over the past few years we have seen brands like Skittles or M&M's be caught up in some debates about politics and race that have gotten really testy. Were you guys scared?

Hyder: From a social media perspective, these things can go either way. It takes one person misreading something. So yeah, that was a concern, but [our CEO's and] the Dippin' Dots team's greater concern was making sure that they responded to their customers. ... People expected a response. ... The idea of not being responsive to customers was just so much worse.

Part of your letter talks about making jobs for Americans, ideals people of both parties can get behind. How do you think the White House will respond to that message?

Stuber: I hope they do respond. We're totally as about as American as you can get. Our headquarters are in Kentucky. The company's 29 years old. We hope that he does respond, and maybe he can truly experience Dippin' Dots in a different way.

Were you serious about having an ice cream party at the White House briefing Room?

Stuber: We are prepared. We were just counting how many pallets we would need to deliver to feed the White House. So I really hope he calls us on that one.

Meanwhile, he has been getting attention for another spat — this one with Target. A 2014 tweet seemed to pick a fight with the department store chain over milk, with Spicer writing, "come on @target — just realized the two gallons of milk you sold me expire tomorrow." Target's official Twitter account responded soon after that initial tweet, with their apologies.