Accessibility links
Trump Vows 'Big Border Tax' For U.S. Manufacturers That Move Jobs Abroad President Trump has suggested an import tax of up to 45 percent on goods made by U.S. firms overseas. But it's illegal to single out individual companies and it's unclear what form the tax would take. 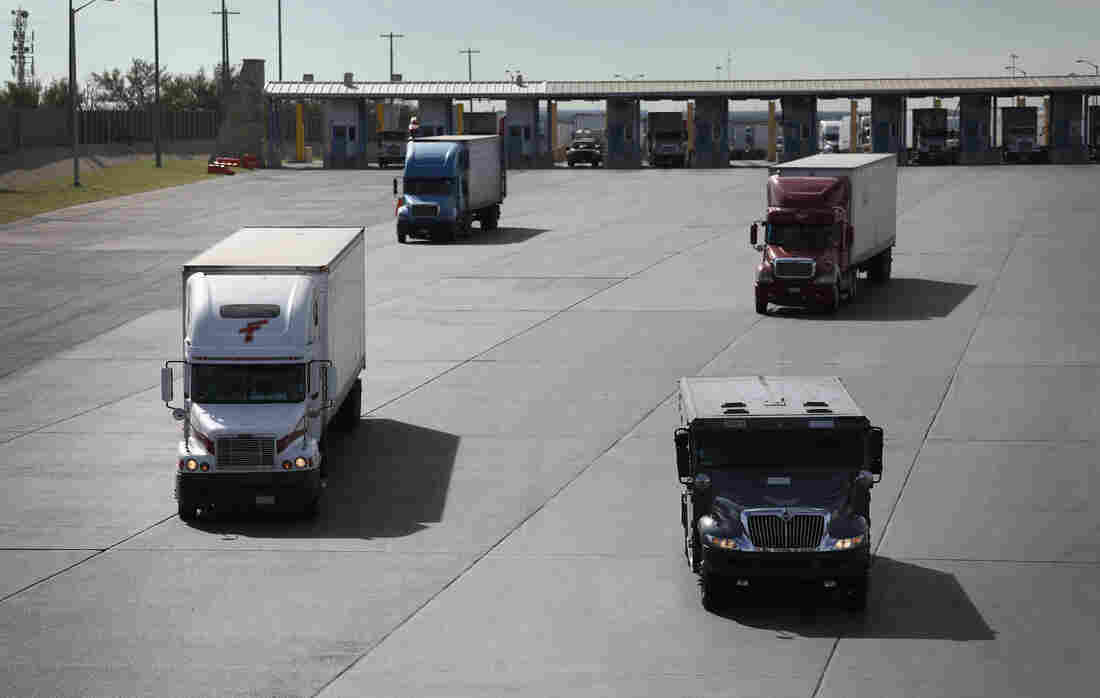 Trucks, including an armored car, pass through U.S. customs in 2016 in Laredo, Texas.

President Trump met with executives of the Big Three U.S. automakers, the latest in a parade of business leaders to visit the White House in the first few of days of the Trump administration.

The president told the executives of General Motors, Ford and Fiat Chrysler on Tuesday that he was going to make it easier for them to invest in the country.

The president assured the executives that his administration will be among the most business-friendly in the world.

But Trump also has been threatening companies that move U.S. jobs and factories to other countries. During the transition, President-elect Trump began singling out companies — including Carrier, Ford and GM — that were planning investments in Mexico that involved moving American jobs.

In a tweet about GM, Trump promised a big border tax on Chevy Cruzes shipped from Mexico into the United States. He repeated that threat to corporate leaders Monday.

"A company that wants to fire all of its people in the United States, and build some factory someplace else, and then thinks that that product is going to just flow across the border into the United States — that's not going to happen," Trump said. "They're going to have a tax to pay, a border tax, substantial border tax."

Trump has suggested the tax could be 35 percent to 45 percent of the value of the product. Exactly what form the tax would take is unclear.

House Republicans have their own idea: They've talked about a steep border-adjustment tax on all goods coming into the country, as part of their plan to overhaul the tax code.

But both Trump and his nominee for treasury secretary, Steven Mnuchin, have said that's not what they're contemplating.

During his confirmation hearing Thursday, Mnuchin said that what Trump has suggested is that, for certain companies that move jobs out of the U.S., "there may be repercussions," including "taxing" products they try to move back into the United States.

But Trump doesn't have the authority to do that, says Steve Charnovitz, an international trade specialist at George Washington University Law School.

Charnovitz says it would be illegal for Trump "to impose a tax or a tariff on a company merely because it moves its production outside the United States" and seeks to import goods into the U.S. from Mexico.

Charnovitz says presidents do have authority to levy tariffs on individual nations and products, but not on individual companies. Trump might try to target a specific company without naming it by defining the product in detail, for instance, a five-door, 3,200-pound, four-cylinder car, but Charnovitz says that tactic would likely get struck down by federal courts.

The bigger issue, says Charnovitz, is that "it's a crazy idea." Charnovitz says Trump campaigned on making American great again, but "he's offering these counterproductive trade policies that can only make it worse for the U.S. economy and for American workers." That's because his policies will likely lead to less trade, and most economists believe trade boosts growth and benefits consumers and most workers.

That said, Charnovitz acknowledges that he can understand why workers who lost their jobs to trade voted for Trump.

"The Obama administration did a terrible job in trying to explain the benefits of trade," he says.

And, Charnovitz says, for decades the federal programs that were supposed to help workers and communities hurt by trade have not done a good job.