Accessibility links
U.S. Men's Soccer Goes Back To The Future With New Coach, New Priorities For the first time in decades, the struggling U.S. team may not qualify for next year's World Cup. But the return of Bruce Arena, who led the team to two World Cups, brings hopes of a turnaround. 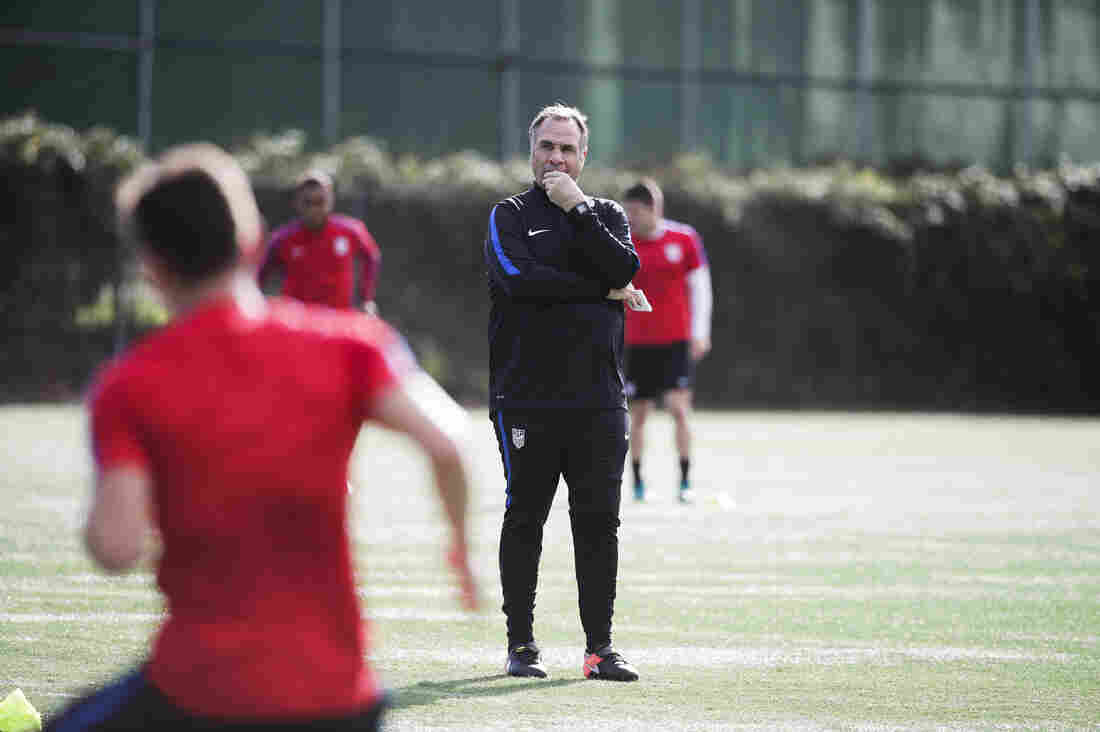 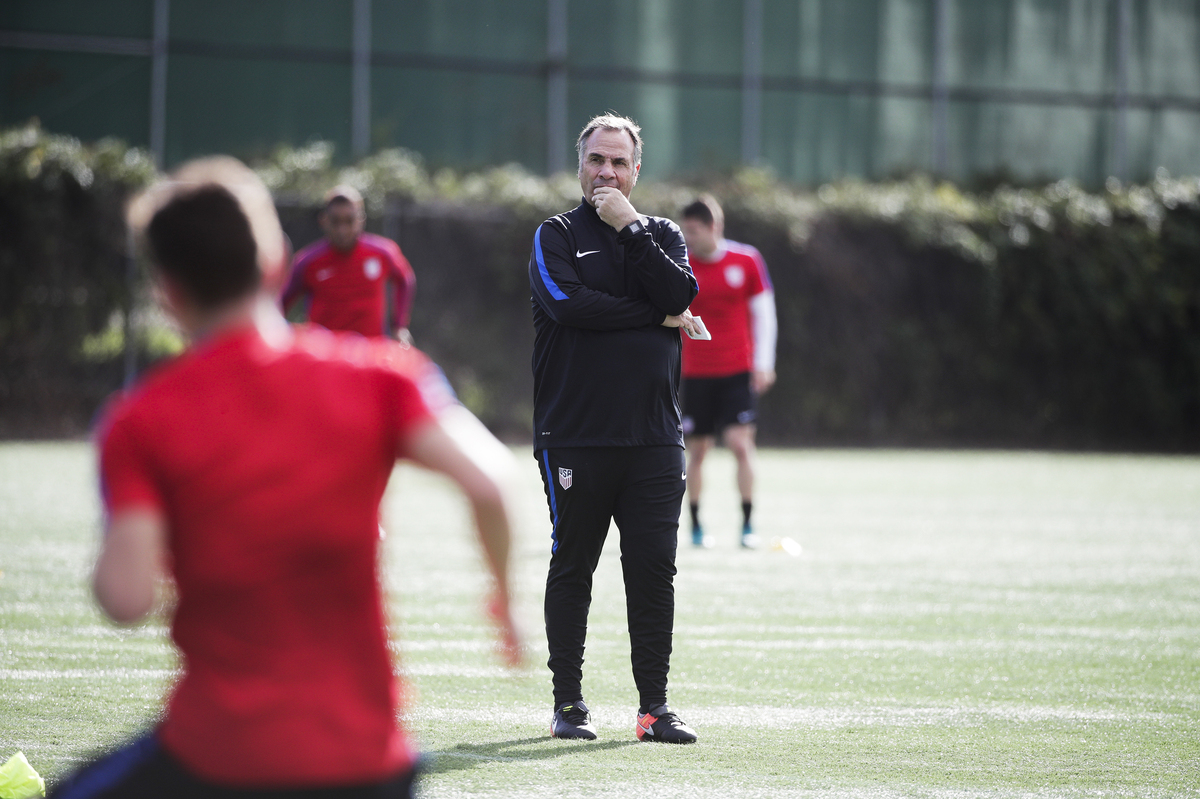 U.S. men's national soccer team coach Bruce Arena watches his team during a practice session on Jan. 11, in Carson, Calif. Arena returned to the U.S. team in November to salvage its run for World Cup qualification.

The U.S. men's national soccer team is back in action with a game against Serbia on Sunday. It's a so-called friendly, meaning it's not part of any official competition.

But it will provide a first look at the team under its new head coach or, more precisely, its new old head coach.

Bruce Arena coached the team from 1998 to 2006. He has won more games with the U.S. men's national team than any other coach, and is the only person to lead the U.S. at two World Cups, including a quarterfinals appearance in 2002. His long and successful career includes multiple NCAA championships at the University of Virginia and several titles in Major League Soccer, the U.S. men's professional league.

Now he's back, on a rescue mission of sorts. Last November, the U.S. lost its first two matches in the final round of qualifying for the 2018 World Cup.

After the defeats, head coach Jurgen Klinsmann was fired. Arena was hired with a specific mandate: get the team to Russia for next year's tournament.

Failure to do so would mean a big step backwards for a men's team that's played in every World Cup since 1990.

The first step was bringing together 32 players for what's known as January camp in Carson, Calif. All the players were from the MLS. Top U.S. players playing overseas weren't able to attend because their seasons are underway.

U.S. Soccer Reaches Back To The Past To Kickstart Its Future

The second week of camp opened on one of those southern California days in January that laughs at the calendar. The sky was blue and cloudless. The morning temperature crept toward 70 degrees. And on a lush, green soccer field at Carson's StubHub Center, the U.S. national team scrimmage was all chatter and speed and energy.

After the two qualifying losses in November — 2-1 to Mexico and a 4-0 embarrassment to Costa Rica — the Americans dropped to the bottom of the region's hexagonal. That's the six-country World Cup qualifying group. The U.S. men's team is not among the world's best. Still, the results were dispiriting: The team didn't play like a team.

"I wouldn't say it's that bad," Arena said. "You know, we're not in triage right now. We're in, maybe, primary care. Obviously it's not an easy situation being down at the bottom in the hex right now, but our aim is to make up for lost ground — real quick." 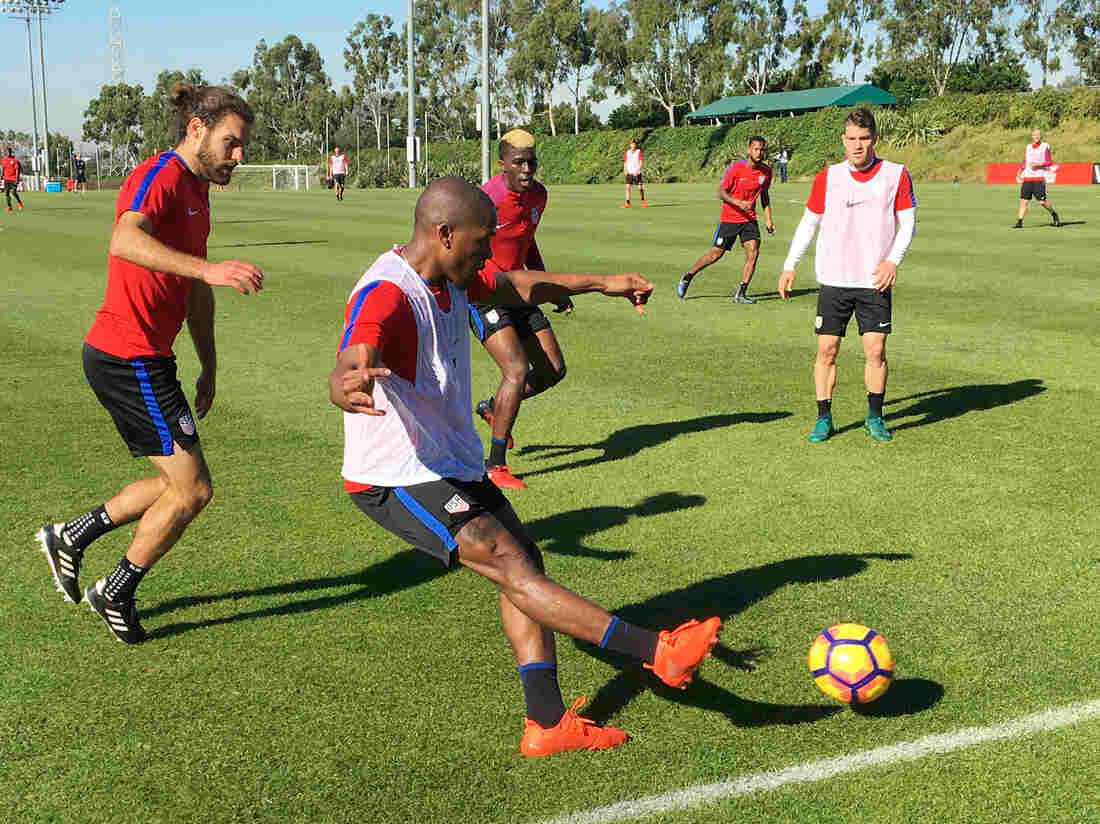 Darlington Nagbe of the MLS' Portland Timbers passes to a teammate during a scrimmage at the U.S. men's national team January training camp in Carson, Calif. Closing in on Nagbe from behind is USMNT member Graham Zusi, who played in the 2014 World Cup in Brazil. Tom Goldman/NPR hide caption 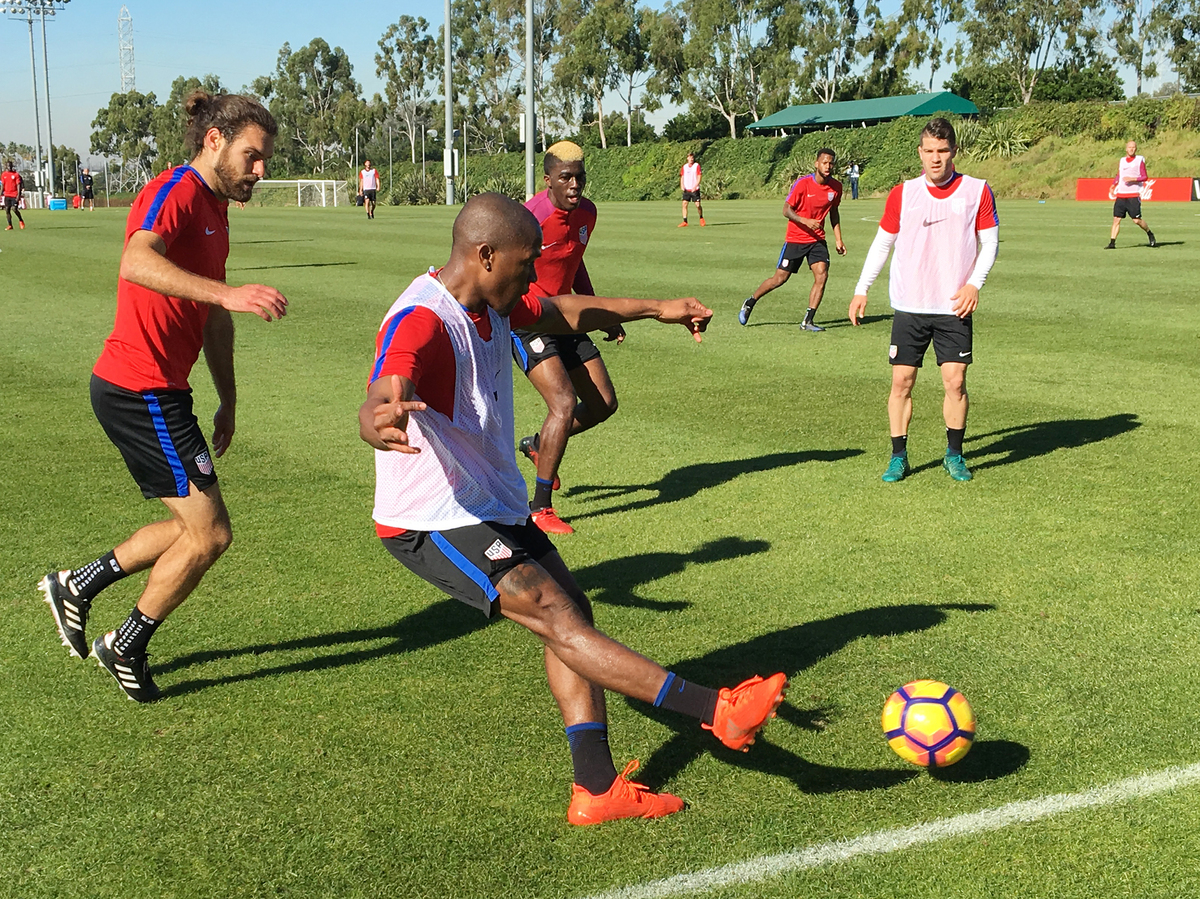 Darlington Nagbe of the MLS' Portland Timbers passes to a teammate during a scrimmage at the U.S. men's national team January training camp in Carson, Calif. Closing in on Nagbe from behind is USMNT member Graham Zusi, who played in the 2014 World Cup in Brazil.

A new set of priorities

The next qualifying matches, against Honduras and Panama, are two months away. Until then, Arena has a couple of priorities.

"We want to get our defending right," Arena said. The team's defense looked weak against Mexico and Costa Rica, so he's putting some emphasis on that during the camp.

Building a team probably is Arena's main priority. This has been one of his strengths during a long coaching career.

"Bruce has an aura," U.S. veteran midfielder Michael Bradley said. "When he walks into a team, he has a way about him and a way of working that I think engages everybody and motivates every guy to play for him and to really go after things."

Midfielder Graham Zusi talked about Arena's ability to communicate with his players.

"Every day he lets us know what the mission is for training," Zusi said. "Every now and then we'll have a quick meeting after lunch, as well, just to kind of recap."

Asked whether those communication skills were missing with Arena's predecessor, Klinsmann, Zusi laughed.

"I thought we weren't talking comparisons here," he said.

In fact, players were advised before camp opened not to publicly compare Arena to Klinsmann.

But comparisons were inevitable. Klinsmann's firing in November followed several years of criticism: about his game tactics, about his preference for choosing national team players with international experience over players with experience in MLS. It's understandable — Klinsmann played and coached in his native Germany and he experienced what any soccer fan knows: the best of the sport is overseas.

Arena coached MLS teams for a number of years, most recently the L.A. Galaxy from 2008 to 2016. He's been more open to having MLS players on the national team. In fact he brought to camp some MLS players who were overlooked by Klinsmann.

According to a U.S. team official, Klinsmann also liked to make players uncomfortable. When they competed for roster spots, he didn't want them feeling like anything was guaranteed.

Arena, on the other hand, talks about relating to his players — although he's hardly an "everybody-gets-a-trophy-and-a-hug" kind of coach. At practice, he lets players know in no uncertain terms when things aren't working.

"Too sloppy there guys," he yelled during one drill. "Keep the ball on the ground!"

And while the practice was high speed, physical and keenly competitive, there was a lighter feel as well. A U.S. soccer official watching from the sidelines noted the players "didn't look nervous."

In 2002, Bruce Arena led the U.S. men to the World Cup quarterfinals. It was the team's second best finish in history — and the its best finish since the very first World Cup in 1930.

Now, 15 years later, his initial goal, at least, is much more prosaic: just to make it to the tournament next year.

There are eight matches left in the final round of qualifying. Though it's not time to panic yet, there is an urgency to the upcoming qualifiers. The games against Honduras on March 24 and Panama four days later aren't must-win. But Arena says the U.S. needs to at least get four points. That means a win, which is worth three points, and a draw, worth one point.

Any more losses, and it might just be time to panic.