Accessibility links
As Obama Clean Power Plan Fades, States Craft Strategies To Move Beyond It The plan is on hold while a legal battle plays out. Even if it's upheld, the Trump administration is likely to appeal to the Supreme Court. Meanwhile, states are looking at energy alternatives. 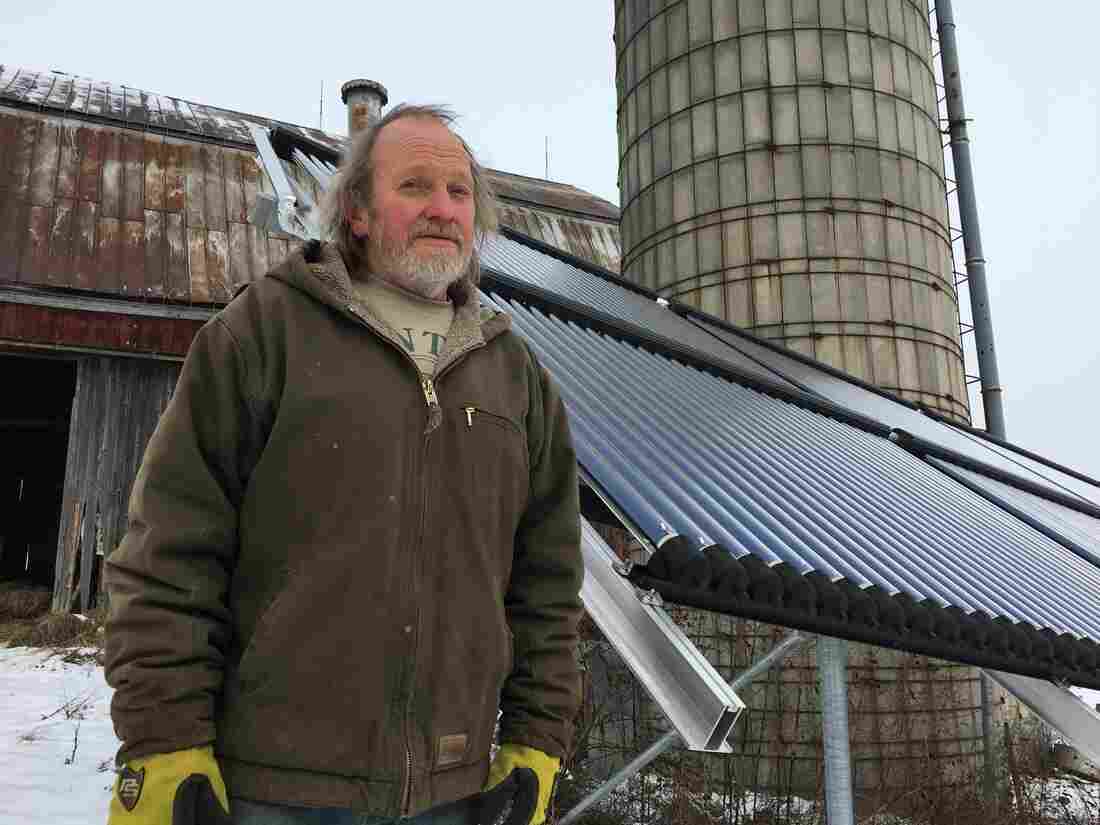 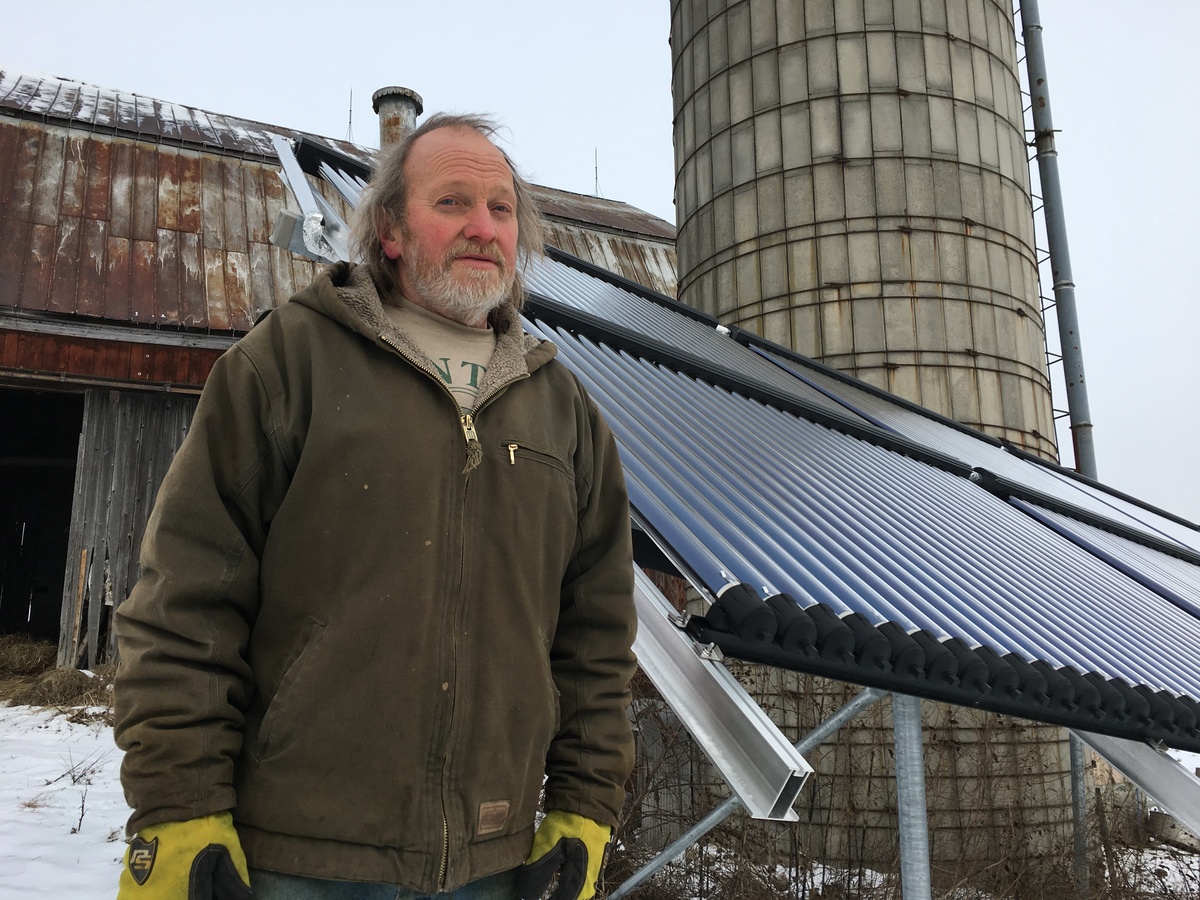 Rick Moore, a dairy farmer in Canton, N.Y., has a solar thermal array to heat water he uses to spray down milking equipment.

There have been no executive orders yet to undo President Barack Obama's signature climate plan, but many officials and environmental groups consider it as good as dead. The Clean Power Plan is on hold while a legal battle plays out, and even if an appeals court upholds it — a decision could come any day — the Trump administration is likely to appeal to the Supreme Court.

The state of New York decided to forge ahead anyway. Like a number of other mostly liberal states, it is continuing with efforts to drive down the carbon emissions that drive climate change.

In the upstate village of Canton, dairy farmer Rick Moore shows off the solar thermal array tucked next to his slouching red barn. It's a cloudy, slushy day, but "you still get rays that still help heat it up," Moore says.

The system warms the water that runs through the solar tubes. Moore then uses the water to spray down his milking equipment. He says it will save him $1,000 a year, and help reduce the carbon emissions he says are changing the climate here.

"We had winters when I first started, that you had three feet of snow and cold for two weeks at a time," he says. "You're not seeing that nowadays."

New York state paid for nearly the entire system. It sees Moore as a tiny piece of a puzzle that adds up to getting half of the state's power from renewables by 2030, even without a federal mandate.

The Clean Power Plan would have required energy plants to cut their carbon emissions, leaving it up to each state to figure out how to reach a specific reduction target. The plan was supposed to be the main way the U.S. carried out its commitment under the historic Paris climate deal. But after it was announced in 2015, about two dozen mostly conservative states sued the Obama administration to block it.

Still, New York has not only stuck with its own plan to reduce carbon pollution, it's now doubling down on its goal.

"We are not going to stop until we reach 100 percent renewable because that's what a sustainable New York is really all about," Gov. Andrew Cuomo said earlier this month.

New York is pouring billions into everything from solar to smart power grids, electric car charging stations to huge offshore wind farms. In fact, Cuomo just announced the nation's largest offshore wind project. The state already gets almost 25 percent of its power from renewables, mostly from hydropower dams. Critics say the next 25 percent is the big lift.

Cheap natural gas has driven down power prices. So much, says Gavin Donohue of the Independent Power Producers of New York, that existing renewables, like wind, hydro and biomass, need more state help to stay in business.

"What's guiding all of our policy development here in New York is not cost, not efficiencies, not reliability, but what gets us to some magical CO2 number to show that we're a national leader," he says.

Another complication could be Cuomo's recent announcement to shut down the Indian Point nuclear plant, near New York City. But the state says it plans to replace that with another kind of carbon-free power, including more wind farms. It also plans to add transmission lines to carry hydropower from Quebec.

North Dakota led the legal challenge against Obama's Clean Power Plan, and many there were happy to see it put on hold. The state gets three-quarters of its electricity from thousands of tons of lignite coal, among the most polluting sources of energy. For that reason, the climate plan would have required bigger emissions cuts than almost any other state, some 45 percent.

"North Dakota had to be two-thirds of that way by 2022," says Randy Christmann with the North Dakota Public Service Commission. "That's only a few years away and there's no way we were getting there."

The state would likely have had to add hundreds of wind turbines and shut down coal mines and plants.

Jason Bohrer, with North Dakota's lignite coal trade group, says it's great the Clean Power Plan is likely gone with the new administration. But "Donald Trump is not the cure-all for the coal industry," he says. "This doesn't fix everything. It just gives us the opportunity to provide solutions." 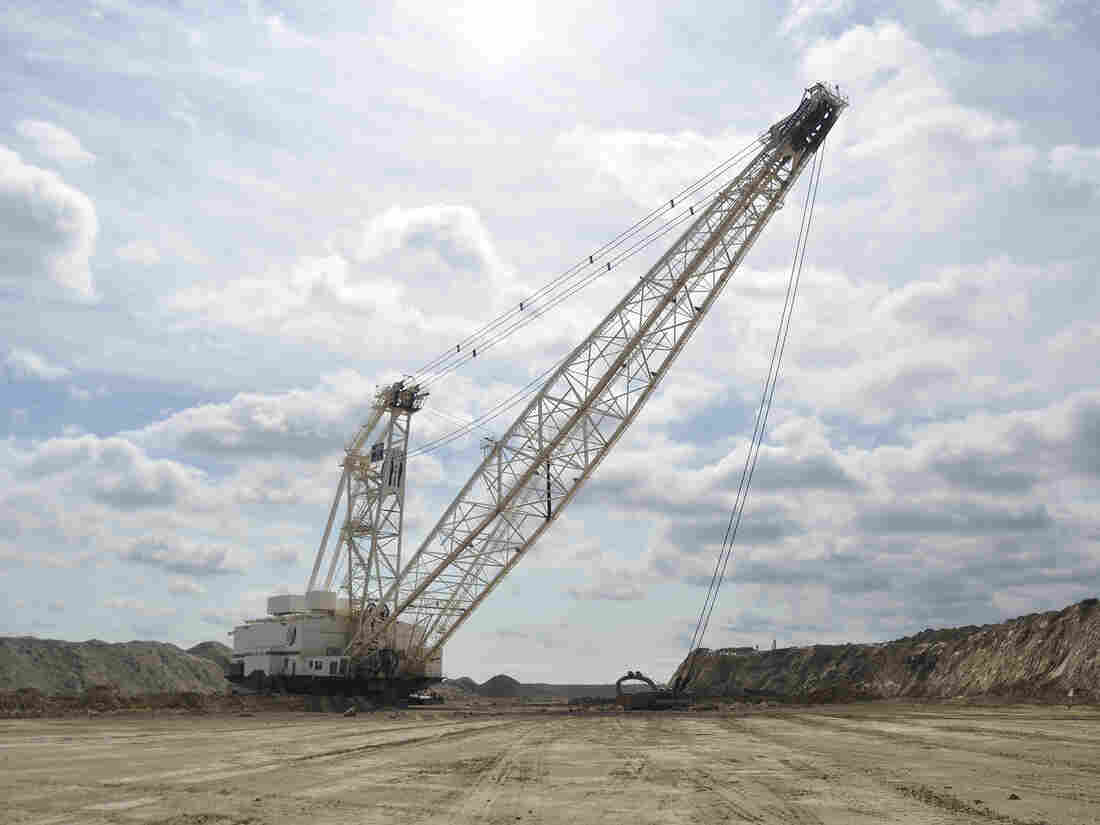 A dragline at the Center Mine in North Dakota removes dirt to expose layers of lignite coal. The coal is mined and transported to a power plant just a few miles away, where it's burned to generate electricity. Amy Sisk/Inside Energy hide caption 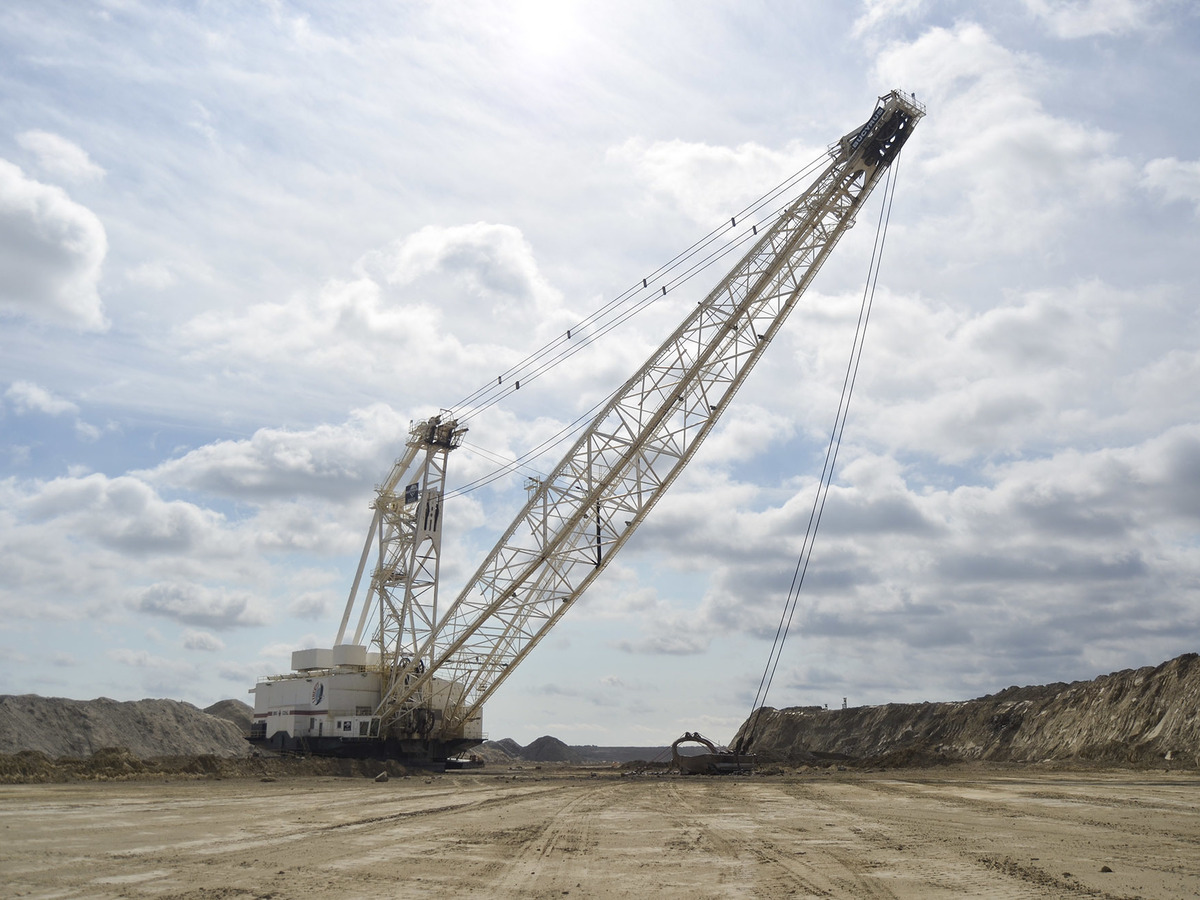 A dragline at the Center Mine in North Dakota removes dirt to expose layers of lignite coal. The coal is mined and transported to a power plant just a few miles away, where it's burned to generate electricity.

Bohrer says public demand and market forces are fueling a boom in cleaner energy. Cheap wind power has grown into North Dakota's second-biggest electricity source. So even though the pressure's off to curb emissions, the state is looking to clean up coal as a way to save jobs.

The state and the coal industry have sunk millions into developing a coal plant that reuses the carbon dioxide it creates. The aim is zero emissions.

If it works, Dave Glatt with the state health department thinks this could bring the state close to that ambitious 45 percent reduction target.

"We may not hit it necessarily on the exact timelines that the Clean Power Plan was looking at," he says. "But I do think that that's something we should look at. Can we achieve that or even go beyond that?"

This year, North Dakota will craft its own energy plan, hoping coal and renewables can co-exist.

It's not clear if market forces can get the U.S. all the way to its goals under the Paris climate deal. They may take a long time to play out, and climate scientists say a large-scale shift to clean energy needs to happen urgently. Still, few energy experts can imagine building another U.S. coal plant. Operators must plan decades into the future, they say, and even if the Trump administration won't tackle carbon emissions, a future president likely will.

Obama's Clean Power Plan was also an easy lift for some, and many states are already close to meeting their goals.

But globally, the Paris climate deal is not nearly enough. The U.S. — like other countries — would have to do much more to keep carbon emissions below the point where scientists say they will have disastrous consequences.

So far, there's nothing to suggest the Trump administration plans to make that extra push.