Accessibility links
7 Pieces Of Unsolicited Advice For Those Rebooting 'Queer Eye' Netflix announced it will bring back the wildly-popular-until-it-wasn't Queer Eye for the Straight Guy for eight episodes. Production will start in the spring. We have notes. (Note #1: Don't.) 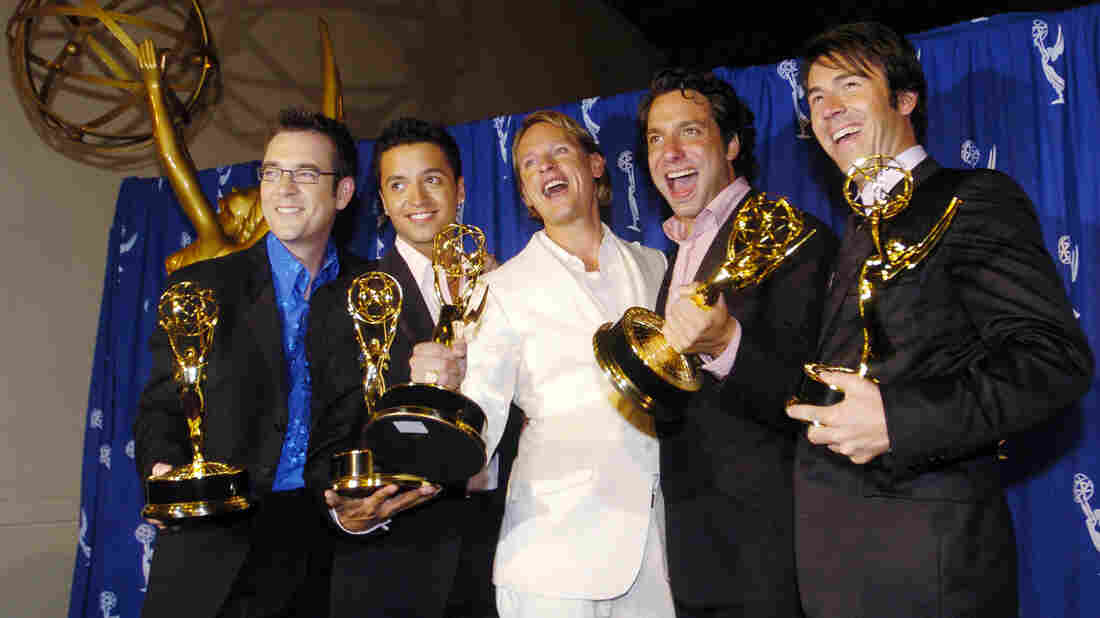 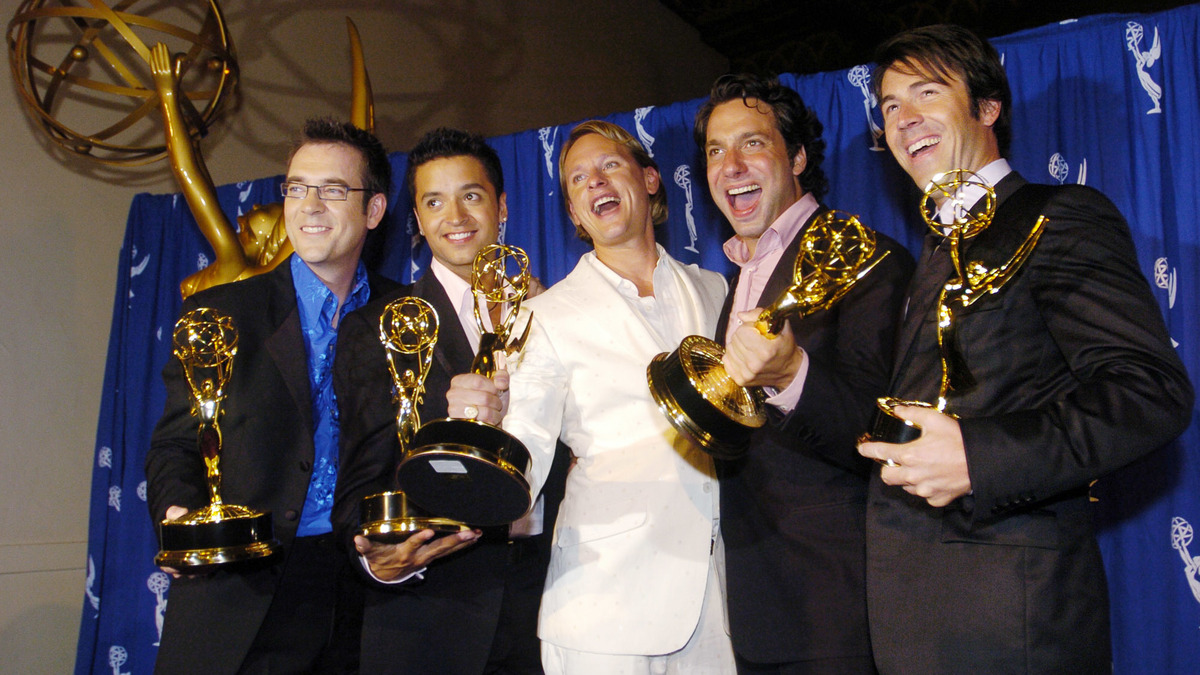 This is a thing for which no one — no one — was clamoring. There's still time to turn back! I'm the creepy guy at the beginning of the horror movie, imploring you not to enter the abandoned house/read from the blood-smeared tome/go for a swim, at night, alone. You don't have to do this. Save yourselves!

Ok, you're not gonna let this go? You're really going to revive Queer Eye for the Straight Guy, which ran on Bravo from 2003 to 2007, on which five gay men — the waggish Carson, the raffish Thom, the nerdy Ted, the sexy Kyan, and also Jai was there — made over hapless straight men in five key areas, respectively: Fashion, Design, Cuisine, Grooming and ... Other?

Fine. It's both wildly unnecessary, and, according to my calculations (detailed for your edification/posterity/the betterment of the whole damn world at the bottom of this post, under "Notes on Reboots and Probability"), premature. But fine. Go nuts. Here's my third piece of advice, then.

Looks like you're already on this. You've announced that the original Fab Five may make return appearances in some form, but you'll be looking for fresh blood to make quips. And drink. And come up with their own weird ways to say "push up your sleeves." And teach straight guys how and why to abjure overhead lighting, and how to make a simple pasta dish, and shave with the grain, and [note to self: come back later and insert whatever the hell Jai did, here].

In a very real sense, Queer Eye offered a crisp slap in the complacent, dull-eyed face of the straight-manchild archetype, which (not coincidentally) the wider culture of the mid-'00s was then eagerly embracing.

The key difference, of course, was to whom that advice was directed; for once, it wasn't women being lectured about the sundry patriarchal standards they were expected to uphold, it was ... the patriarchy itself. "Look, you lazy, schlubby, Seth-Rogenish lout," it said. "You must make an effort. For your girlfriend, for yourself: Try harder than sweatpants."

That was the gig, and original Fab Five acquitted themselves admirably. But the world's changed.

There was always something reductive and retrograde about the premise, admit it. The notion that there's only one "Queer Eye" — one kind of gay man, in this case, who can dependably be expected to wax fabulous about food and furniture and fashion and haircare and [wait, was it getting tickets to shows? I think Jai was about getting tickets to shows] is flatly wrong. I say this as a gay man who subsists on turkey breast sandwiches and lives to avoid shopping. Our numbers are legion.

(Quick, true story: back when Queer Eye premiered, my then-partner-now-husband and I used to watch it every week with friends. We had drinks, we laughed, we tut-tutted over the obtuseness of the straight-guy-of-the-week. We knew it trafficked in stereotypes — gleefully so — but because the show clearly did so intentionally, it seemed harmless.

Very early in the show's run my partner and I found ourselves at a party at which a gay couple we'd never met absolutely lit into the show; even used the m-word. "Gay minstrelry," one of them sniffed; we winced. He followed that up with another unfortunate, reductive m-word: "Middle America sees that show and thinks we're not real people, we're just mincing stereotypes, we're all the same. It makes them think that every gay man just thinks and talks about gay this and gay that."

I attempted to steer the conversation to other matters by asking what he and his boyfriend did for a living.

Which is how I learned they were professional figure skating judges.)

Pursuant to item 4, above: Maybe listen to queer writer/director Adam Goldman, who yesterday tweeted, in reaction to the Queer Eye announcement: "How about queer eye for the queer guy? There are some basic gay m- - - - - - - - - - - -s out here."

Amen. Also: I volunteer as tribute. Lord knows I could always stand with a good lecture about, like, beard conditioning or whatnot.

The culture, as seen on TV, has changed since 2003. There are still a lot of straight man-children taking up space at its center, of course, but there are more queer people, more people of color, more women jostling for space as well. The QE reboot, if you insist on it happening, has to reflect that.

Yes, the show was silly, and frothy, and fun. But it also never truly lived up to its title. It claimed to hold a queer eye up to (hapless, indolent, doesn't-know-how-to-make-a-dang-stir-fry) nature — but in fact the eye in question was always, invariably, that of very specific, loftily urbane and comfortably urban gay male experience. Queer means a lot more than that. So could the show.

The original Queer Eye premiered on Bravo just a few months after the U.S. invasion of Iraq in March 2003, and it ended amid the 2007 troop surge. As such, it served a demonstrable purpose, over and above teaching a bunch of mooks in hockey jerseys how to follow a basic moisturizing regimen. It was a release valve for a kind of collective national anxiety.

Ten years later, we're living through another anxious time. This one lacks the clear focus of a specific military action; it's all around us, in the air we breathe.

So if you're going to do this, Netflix, do it big.

I'm just saying: You haven't started casting yet. There is still time to turn back from this path and keep the original show preserved in amber — tasteful, bespoke, well-coiffed, mid-00s amber, with its sleeves forever, freshly zhuzhed.

A Note on Reboots And Probability

The graph reproduced below is the product of my advanced, high-level calculations in re: the percent probability that a given property (often, but not exclusively, a TV show) will get rebooted in 2017.

The algorithm in question, which I fed into vast banks of computers using a series of punch cards, describes a graceful bell curve which is real, and all like, scientific, and was in no way just scribbled on the back of a dry cleaning receipt. So we're clear on that.

Here's the gist: The probability that a given property will be rebooted depends upon the year it first premiered. As we go back in time from 2017, this probability increases steeply to reach a peak in 1995, and then falls off more gradually. Because science is why.

Thus, the section of the curve wherein this probability exceeds 50% (the dotted horizontal line) extends between 1986 and 2001.

Clip and save for your records. You will find it useful.

This means that the probability that Queer Eye for the Straight Guy, premiering as it did in 2003, would get rebooted this year stood at 40%. Which is to say: it wasn't likely, but the possibility was real, considerable.

Weirder things have happened, with an even smaller probability. 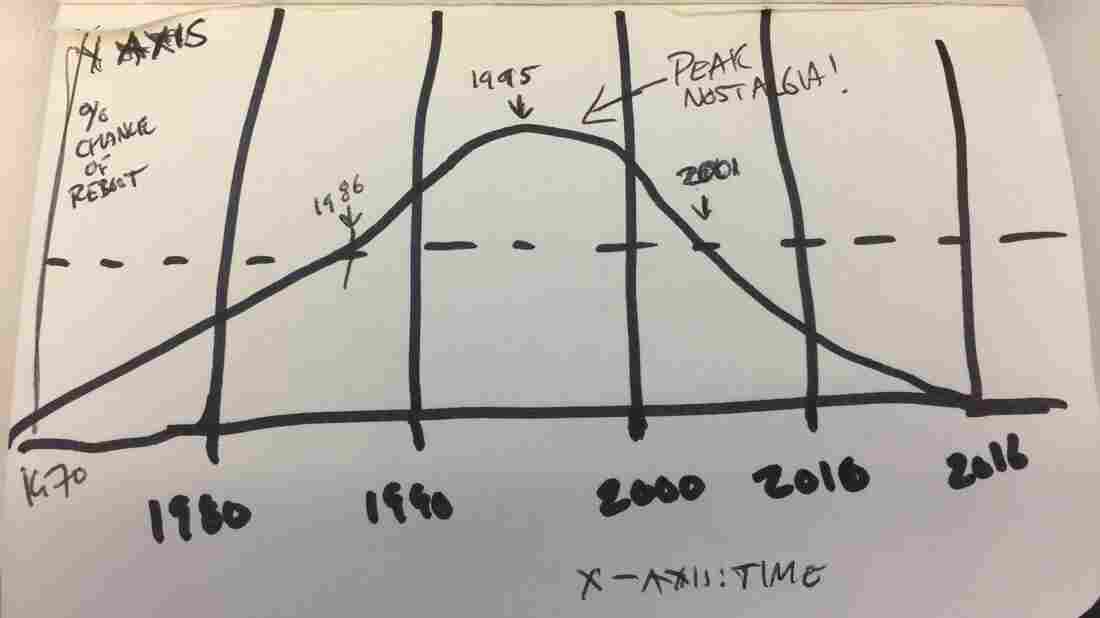 Graph of the author's rigorously(!) scientific(!) algorithm for determining the precise(!) probability a given property will be rebooted. Big science, here. Very impressive. Not remotely made up. Glen Weldon hide caption 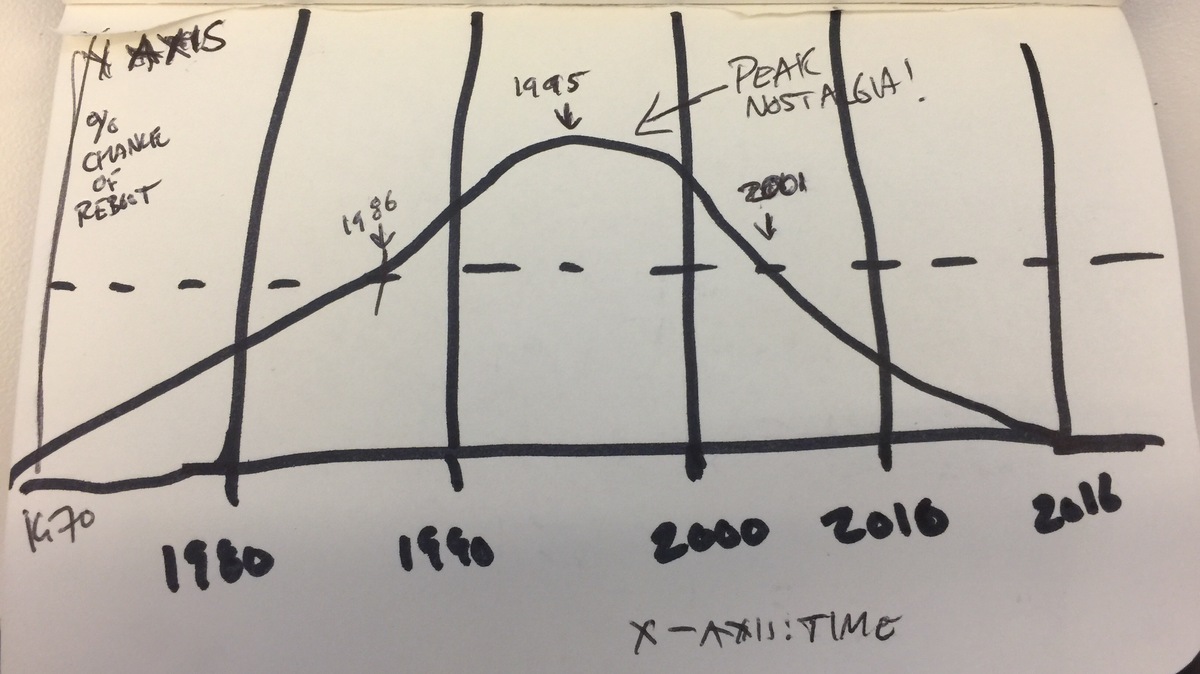 Graph of the author's rigorously(!) scientific(!) algorithm for determining the precise(!) probability a given property will be rebooted. Big science, here. Very impressive. Not remotely made up.