Accessibility links
Mary Tyler Moore: On Her Own, Single And Singular Actress Mary Tyler Moore helped redefine women's roles on TV. She starred in one of the first hit shows to feature a single career woman — The Mary Tyler Moore Show. Moore died Wednesday at age 80. 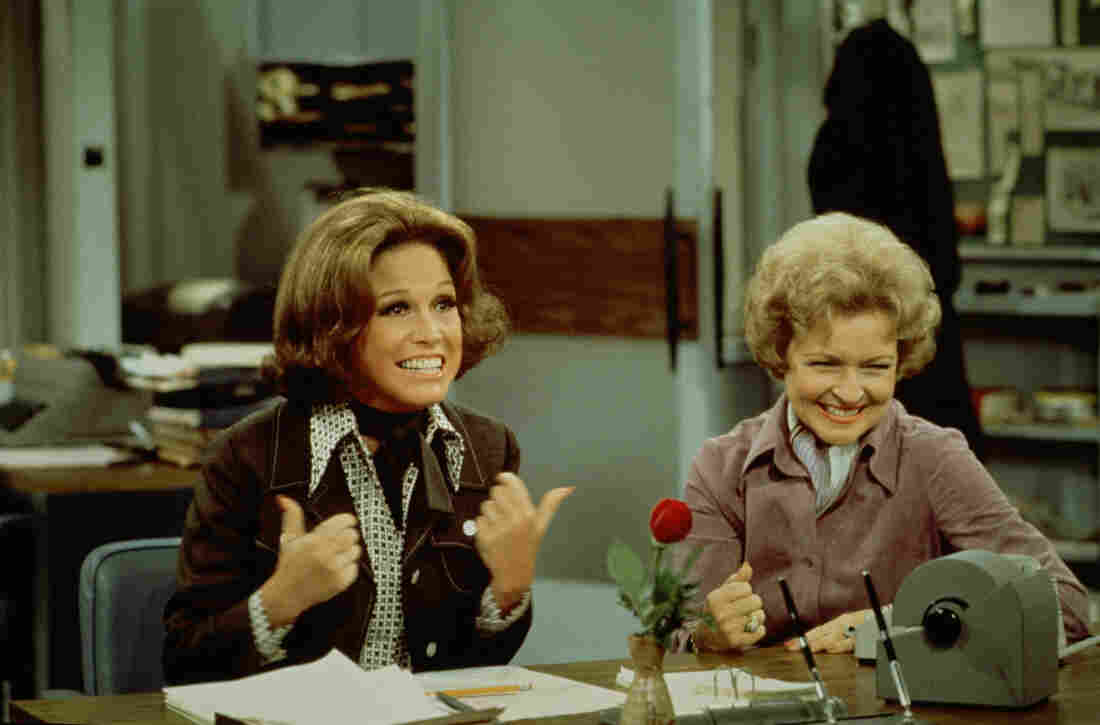 Mary Tyler Moore (left, as Mary Richards) gives a 'thumbs up' sign as she sits at her desk with Betty White (as Sue Ann Nivens) in a scene from 'The Mary Tyler Moore Show' in 1975. CBS Photo Archive/Getty Images hide caption 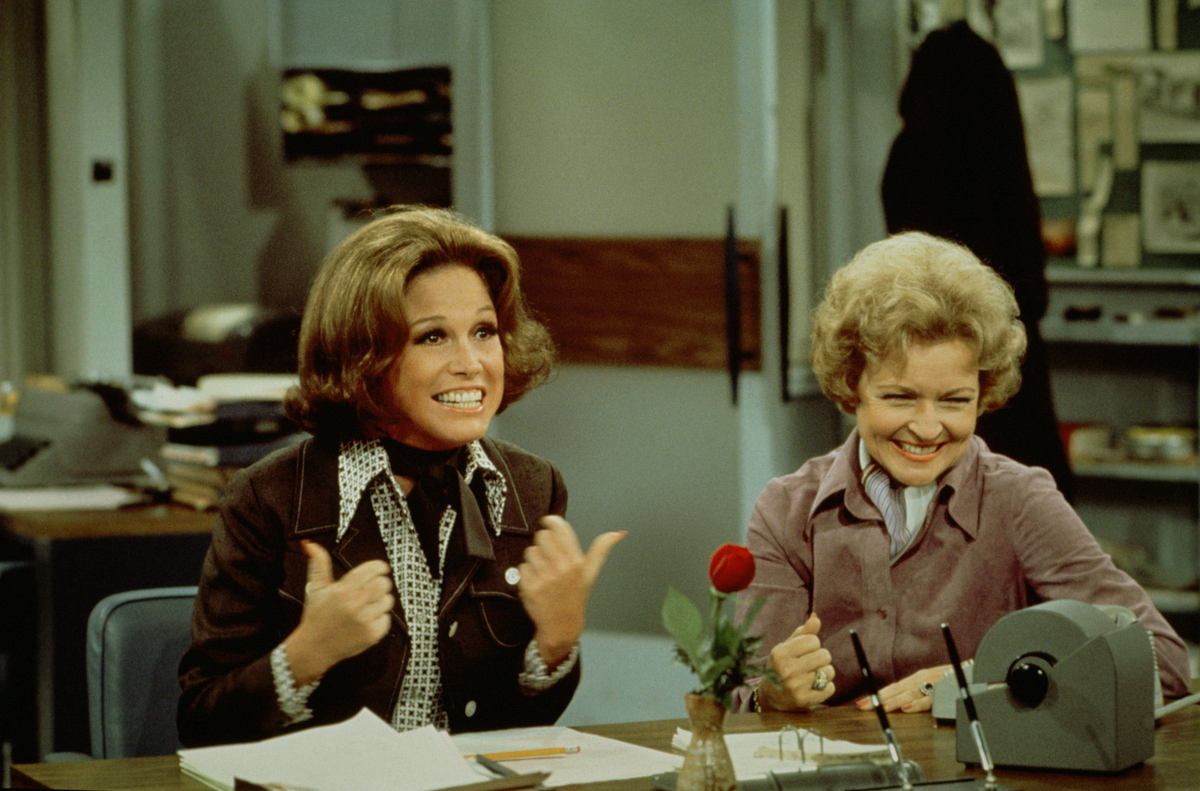 Mary Tyler Moore (left, as Mary Richards) gives a 'thumbs up' sign as she sits at her desk with Betty White (as Sue Ann Nivens) in a scene from 'The Mary Tyler Moore Show' in 1975.

Mary Tyler Moore, who died Wednesday, wasn't just beloved. She was the kind of beloved where they build you a statue. Moore's statue is in Minneapolis, where her best-known character, Mary Richards of The Mary Tyler Moore Show, worked for the fictional television station WJM. She'd already won two Emmys playing Laura Petrie on The Dick Van Dyke Show, but Moore cemented her icon status when Mary Richards walked into that job interview. Even if she got off to a rough start with Lou Grant, her soon-to-be boss, who kept a bottle of whiskey in his desk. He wanted her to join him for a drink. She asked for a Brandy Alexander.

He didn't mean a Brandy Alexander.

Mary Richards was not TV's first working woman, or its first woman on her own. But before Mary, if you saw a woman without a partner at the center of a TV comedy, she was probably a widow, like Diahann Carroll's single mom on Julia or Lucille Ball on the show she did after I Love Lucy, which was, perhaps unsurprisingly, called The Lucy Show.

Mary didn't have a living husband, a dead husband, an ex-husband, or even a permanent boyfriend like Marlo Thomas did on That Girl. It wasn't that she didn't want one. Jennifer Keishin Armstrong wrote Mary and Lou and Rhoda and Ted, a history of the show. And in 2013, she told NPR how Mary stayed single for so long: The show tried out some possible boyfriends, but "no one was good enough for her."

Mary may not have found that exactly right guy, but she did have an apartment, a job, friends and a sex life. In fact, she was on birth control, as the audience learned in November 1972, when Mary's parents were visiting. Her mother cheerfully called out, "Don't forget to take your pill." Mary and her father both answered, "I won't."

Comedies about single women with all kinds of lives would become staples of both broadcast and cable: Laverne & Shirley, Murphy Brown, Living Single, Sex And The City, and now Girls and Insecure — but Mary and her best friend Rhoda were there first. Mary had bad dates before Rachel and Monica on Friends did, Mary had to get the show on the air before Liz Lemon on 30 Rock did, and Mary struggled with a gruff but loving boss before Leslie Knope on Parks & Recreation did.

I talked to Rachel Bloom, the star and co-creator of the CW's Crazy Ex-Girlfriend. She told me one of the things she most appreciated was that Moore was funny on her own. She responded to "the idea of someone being a funny ingenue," she says, "in that she was funny as well as the people around her. And that it was a woman cracking jokes, not just, like, the woman being the straight man for dudes cracking jokes."

Women mattered behind the scenes of The Mary Tyler Moore Show, too. They had roles as writers and directors. And Moore and her then-husband Grant Tinker set up MTM Enterprises to produce the show — you might remember the logo with a mewing cat where the MGM lion would have been. That company produced not just The Mary Tyler Moore Show and Rhoda and Lou Grant, but The Bob Newhart Show, WKRP in Cincinnati, Hill Street Blues and St. Elsewhere.

Minneapolis' Mary Tyler Moore statue was moved indoors in 2015, away from its home on the outdoor Nicollet Mall, to make way for construction. But later this year, it's scheduled to return. And once again, tourists will copy Mary Tyler Moore's pose, and they will throw their hats in the air.

In an earlier audio introduction to this story, we said Mary Tyler Moore was 70 years old. In fact, she was 80.