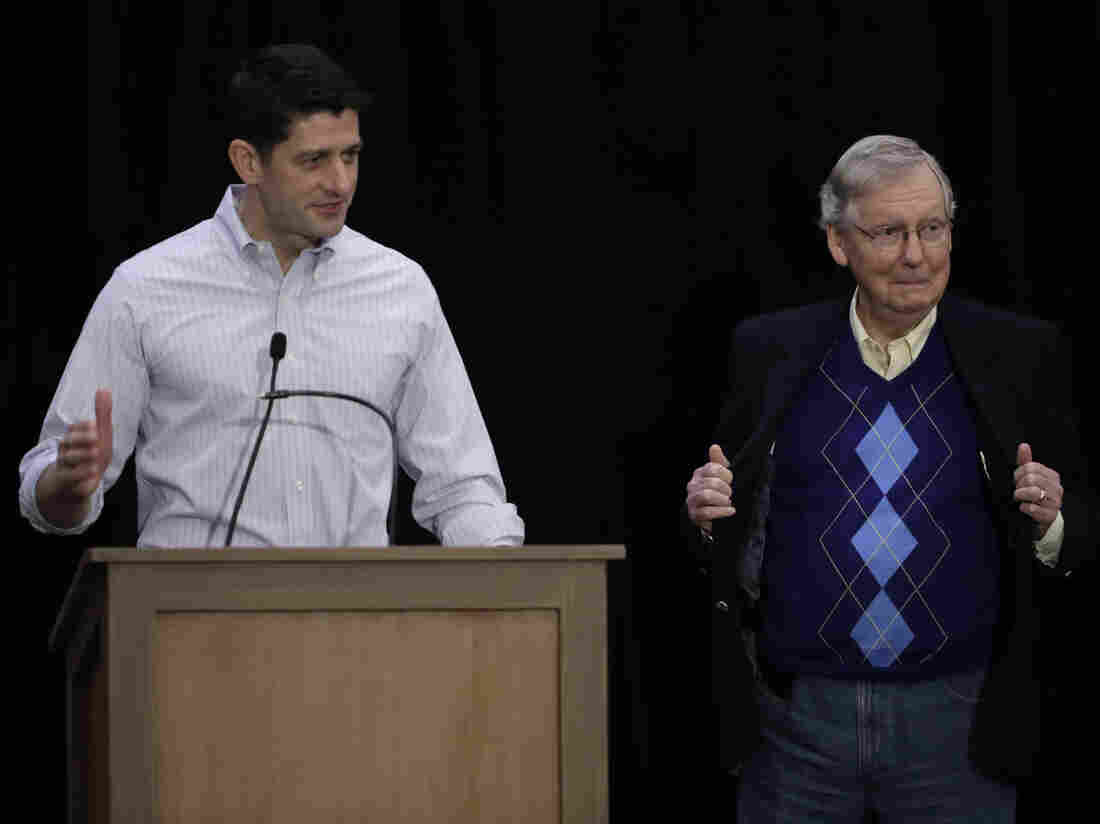 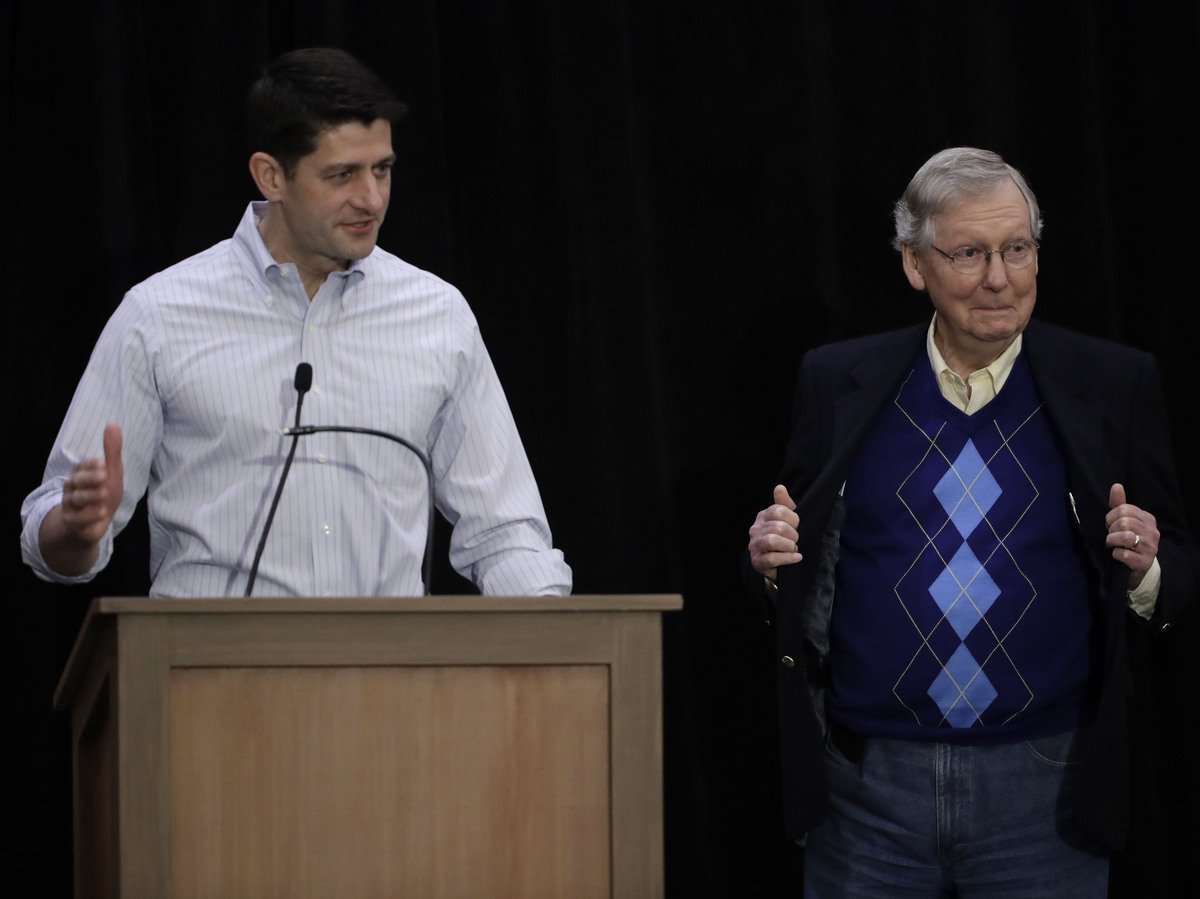 Senate Majority Leader Mitch McConnell (right) opens his coat to show his sweater as House Speaker Paul Ryan speaks with members of the media during the GOP congressional retreat in Philadelphia.

"Buckle up. We're ready to go to work," Vice President Pence told Republican lawmakers at their annual retreat in Philadelphia on Thursday.

With a GOP administration in place for the first time in eight years, congressional leaders have mapped out an ambitious legislative agenda, with goals to have bills to repeal and replace Obamacare, overhaul the tax code and build a wall on the U.S.-Mexico border, all before lawmakers break for the annual August recess.

"We've been working with the administration on a daily basis to map out and plan a very bold and aggressive agenda to make good on our campaign promises and to fix these problems," House Speaker Paul Ryan told reporters gathered here for the party's annual three-day GOP policy retreat. Pence and President Trump joined the lawmakers here on Thursday.

The agenda will test the party's commitment to small government and a fiscal conservatism that in recent years has rejected any new spending without corresponding cuts in the federal budget.

Trump's promises to expand health care coverage and spend more on the nation's ailing infrastructure systems — while cutting taxes for businesses and individuals — will be hard to reconcile with competing GOP commitments to balance the budget and reduce the nation's debt burden.

Nearly all congressional Republicans are self-described fiscal conservatives. But Trump has shown support for vast new federal spending — like that $1 trillion infrastructure proposal — and an indifference to deficit spending if it can spur U.S. economic growth. For instance, Republicans largely agree that tax cuts do not need to be paid for and consider them economic stimulus.

Ryan would not say Republican policies won't increase the deficit in the short term, but he reiterated a long-standing commitment to paying for new spending. "We are fiscal conservatives. If we're going to be spending on things like say, infrastructure, we're going to find the fiscal space to pay for that in our spring budget," he said, referring to the annual budget resolution.

Republicans are already working to provide Trump with $12 billion to $15 billion in new spending to fund his call to finish a border wall with Mexico. Congress is expected to use an upcoming defense supplemental spending bill to include new border funds. The supplemental spending bill is considered "emergency" spending and does not require spending offsets. Ryan and McConnell declined to answer repeated questions about whether the wall would be offset in the federal budget. Trump has insisted Mexico will reimburse the U.S. for the costs, through undetermined new measures affecting trade and tax policy with Mexico.

Leaders say they are on the "same page" as the Trump administration on an agenda that has expanded to the first 200 days in part to accommodate extra scheduling burdens in the Senate related to the confirmation process for Trump's Cabinet and an upcoming Supreme Court nominee.

Ryan and McConnell struck a more cautious tone to reporters on their timeline for moving legislation. "We don't want to set arbitrary deadlines on things. We want to get things right," Ryan said.

"The speaker understands the challenges of getting things through the Senate," McConnell added. "That's been true for 240 years. But we're aware of those challenges and we think we can move forward."

However, in a presentation to lawmakers on Wednesday leaders outlined a 2017 program that included a specific timeline, including:

Congress also wants to pass laws affecting federal flood insurance, veterans health care and financial regulations by the end of the year. Lawmakers are also anticipating further executive actions from the Trump administration on immigration and health care. The ambitious agenda is being pushed by Trump, who has told lawmakers he wants quick action on his priorities.

"President Trump comes from a different world," House Majority Leader Kevin McCarthy, R-Calif., told reporters. "Out in the business community, he likes things done fast, and he's going to continue to push them."

On Thursday, the president did. "We have to deliver," he told lawmakers. "This is our chance to make major and lasting change."