Accessibility links
Hip-Hop Duo Run The Jewels Plays Not My Job Sure they're known as Run the Jewels ... but what do they know about running the Jews? El-P and Killer Mike will answer three questions about rabbis. 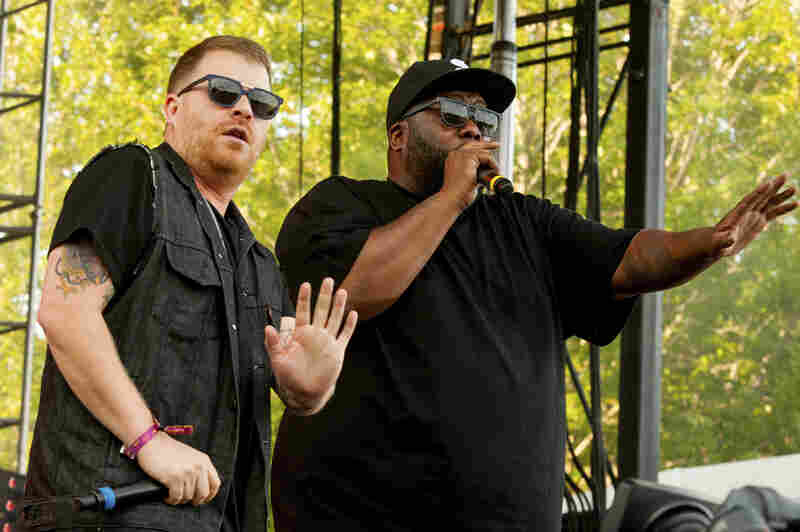 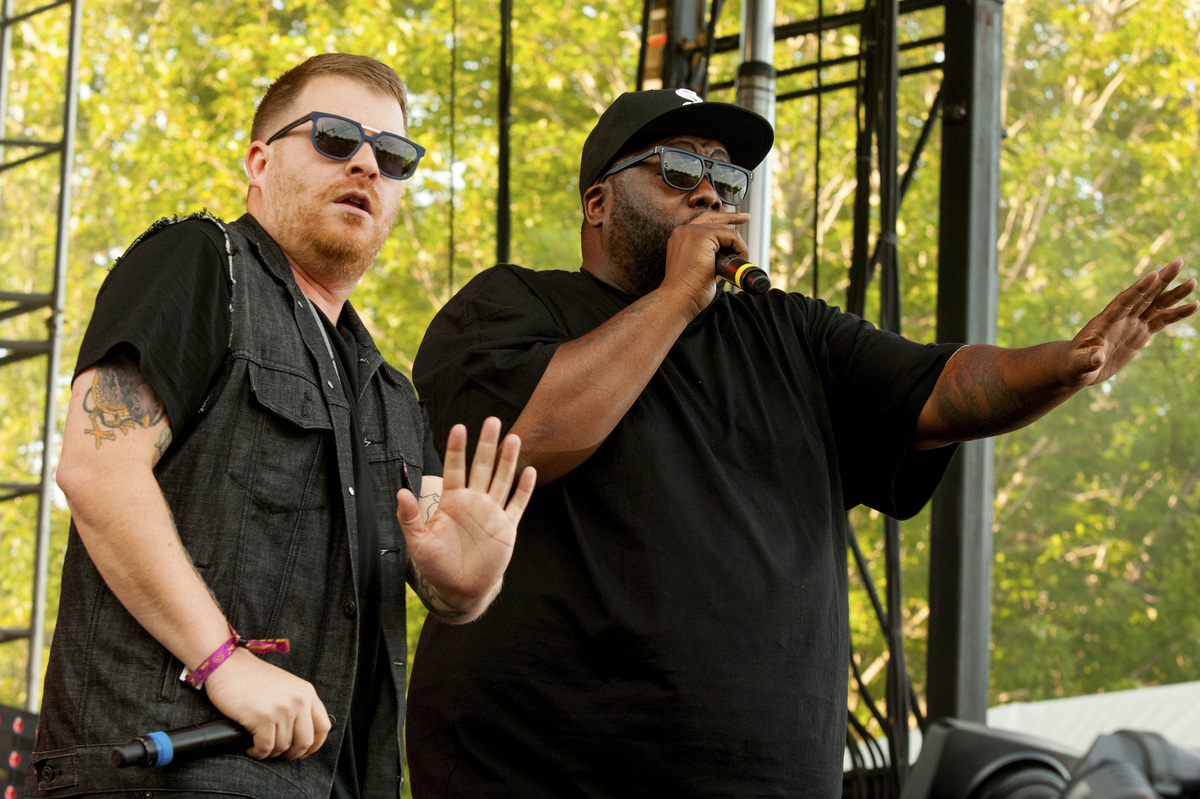 El-P (left) and Killer Mike perform at the Pitchfork Music Festival in Chicago in July 2015.

El-P and Killer Mike formed their duo back in 2013 and have recently released their third album, Run The Jewels 3. We've invited them to play a game called "Oy, gevalt!" Sure they're known as Run the Jewels ... but what do they know about running the Jews? We'll ask them three questions about rabbis.

Click the Listen link above to see how they do.

And now the game where talented people are asked to use none of their talents. It's called Not My Job. So when emcees Killer Mike and El-P met in 2014, they fell for each other harder than the lovers in "La La Land," a film that is the exact opposite of everything they stand for.

SAGAL: The hip-hop duo Run the Jewels has now released their third hit album. It's called "Run The Jewels 3." And we are delighted to talk to both of them. El-P and Killer Mike, welcome to WAIT WAIT... DON'T TELL ME.

SAGAL: Now, I know a lot about hip-hop. I can do practically the first act of "Hamilton" from memory.

SAGAL: So I have heard, though, that the story of your meeting is, like, legendary in hip-hop circles, that you were both doing your own thing, pretty successful, but then somebody put you together and sparks flew.

EL-P: Yeah, we had a mutual friend, Jason DeMarco. And he had the very strange idea to put us in a room, and we just kind of fell in love. We made some amazing music and we liked each other, which is just strange.

SAGAL: That is strange. So you guys don't have, like, the - I mean, 'cause all the great music acts of the past, they were always at each other's throats. But that's not you guys?

EL-P: Our idea is that every great act has, like, you know, three to four great records and then a horrible falling out. We're sort of trying to plot that part now.

SAGAL: I got to ask - I've asked this of the other hip-hop guys we've had on the show. How did you get your names? Killer Mike, you first.

KILLER MIKE: I was in a freestyle battle when I was 14 or 15 years old. A deejay named Double D (ph) heard me slaying a bunch of kids. He literally looked at me, pointed at me and said, this kid is a killer. From that day on, no one else called me my actual nickname, Skunk (ph) or Nut (ph). They called me Killer.

SAGAL: And how about you, El-P?

EL-P: I wish mine was that cool, but it was just me trying to sound cool alone by myself.

SAGAL: Is that allowed?

MO ROCCA: May I ask what are some of your popular songs?

SAGAL: Now, there is one thing that I think Mo might like. Tell me, if you can, about "Meow The Jewels."

EL-P: "Meow The Jewels" was a nightmare of a promise I had to fulfill. We made a joke that if the fans gave us $40,000 we would remix our album using nothing but cat sounds. I was very high at the time. And then someone started a Kickstarter to get the money, and - which was a nightmare because I really didn't want to do that. And...

EL-P: I was high on marijuana.

EL-P: I don't know what else to tell you.

ROCCA: I need to know - did you make the cat sounds yourself, or did you actually, like, bring cats into the studio?

EL-P: Played cats. We played the cats. You'd be amazed at how many ways to make a cat make a sound.

SAGAL: So wait a minute. So you, like - you, like, held the cats up to the microphone, squeezed them in certain places and they went (imitating cat).

EL-P: Of course. Of course. When we do things, we do them all the way, buddy.

MAZ JOBRANI: Did you give the cats rapper names?

EL-P: (Laughter) It's better not to get attached, you know?

SAGAL: OK, El-P and Mike, we have invited you here to play a game that this time we're calling...

EL-P: Can you repeat that?

SAGAL: Let me explain. You clearly run the jewels, so we thought we'd ask you about who runs the Jews.

SAGAL: It was one. I warned you.

SAGAL: Answer two out of three questions. You do that, you'll win our prize for one of our listeners, Carl Kasell on their voicemail. Are you guys ready to play?

SAGAL: Bill, who is Run the Jewels playing for?

SAGAL: Here's your first question. One of the most famous rabbis around today is Rabbi Shmuley Boteach. He was a good friend to Michael Jackson and Donald Trump and other outstanding citizens. He's the author of many religious books, including which of these - A, "The Jew's Guide To How Delicious Bacon Really Is"...

SAGAL: ...B, "Dating Secrets Of The Ten Commandments"; or C, "Moses Supposes His Toeses (ph) Are Roses: A Study Of Delusional Schizophrenia In The Torah"?

KILLER MIKE: I would say B.

SAGAL: B, "Dating Secrets Of The Ten "Commandments." El-P, you're going to go along with that?

EL-P: I'm just going to go along with that, yeah.

SAGAL: I think - yeah, I can see you guys collaborate so smoothly because you're right. It was "Dating Secrets Of The Ten Commandments."

SAGAL: Yeah, Rabbi Boteach specializes in writing romance books based on Judaism. "Kosher Sex" is another one of them.

SAGAL: Yeah. Next question. You have two more chances, but you're already one in. Rabbis - you know, even though, of course, Judaism is an ancient religion with an ancient tradition, sometimes they have to update their teachings as times change as in which of these instances - A, in 2011, a San Francisco Rabbi designed the oy phone with special features for members of the Jewish people; B, in 2009, a Lithuanian Rabbi banned Crocs, those shoes, during Yom Kippur, because those shoes are too comfortable for the required suffering...

SAGAL: ...Or C, in 2014, a rabbi in New York issued new spiritual guidelines for millennial attention spans, including the two commandments?

EL-P: I'm going to just - I'm going to take a guess here, but it's an aspirational guess. It's a romantic one. I really want the Crocs one to be true.

SAGAL: You guys are, like, totally in sync because you're right. It was the Crocs one.

SAGAL: As you may know, as apparently Killer Mike knows, Yom Kippur, days of atonement. You're supposed to be uncomfortable.

KILLER MIKE: I've attended Yom Kippur with my - with Robert Polay (ph), who's an accountant and works for me. So I absolutely...

SAGAL: Do that for me.

KILLER MIKE: You - I'll do that for sure.

SAGAL: Talent, talent, ladies and gentlemen. Last question - just last November, 4,000 rabbis got together in New York to try to film a mannequin challenge. You know, everybody stands still and pretends they're mannequins while the camera pans around. It didn't work out. Why not? Was it A, close scrutiny of the video showed that at least a thousand of these 4,000 rabbis were just actual mannequins dressed with beards and yarmulkes; B, presidential counselor Steve Bannon heard about that many Jews in one place and his terrified screams drowned out the performance...

SAGAL: ...Or C, it turns out that 4,000 Jews simply cannot go 15 seconds without criticizing each other?

EL-P: I've got to say, you know, I'm going to go with C personally.

SAGAL: You're going to with C.

KILLER MIKE: I'm going to run with C, but not based on the Jewish people everyone's thinking about. The black Jewish guys that argue in front of New York transit stations...

KILLER MIKE: I'm going to go with C and represent for the black Jews out there.

SAGAL: I think you should. It was C.

SAGAL: If you can find this video, it is amazing because there's 4,000 Lubavitch rabbis. These are the guys - you know, the beards and the hats. And they're all trying to hold still, but all you can hear is, hey, you're moving. You're not supposed to move. Stop moving. And they're pointing at each other. It's hilarious. Bill, how did Run the Jews do on our show? I'm sorry, I just said Run the Jews.

SAGAL: I'll try it again. Bill, how did Run the Jewels do on our quiz?

KURTIS: They did perfect. They got them all right.

SAGAL: Congratulations, guys. Well done. Run the Jewels' new album, "Run The Jewels 3," is out. They're on tour now. You should see them. They put on an amazing live show. El-P and Killer Mike, thank you so much for joining us on WAIT WAIT... DON'T TELL ME.

KILLER MIKE: Thank you all.

RUN THE JEWELS: (Rapping) It be feelin' like the life that I’m livin' man out of control, like every day I’m in a fight for my soul. Could it be that my medicine’s the evidence for pigs to stop and frisk me when they rollin' round on patrol? And ask why...

SAGAL: In just a minute, limericks are a dish best served cold. Call 1-888-WAIT-WAIT to join us on the air. We'll be back in a minute with more of WAIT WAIT... DON'T TELL ME From NPR.

More With Run The Jewels