Accessibility links
Abortion-Rights Opponents Energized By New Administration Abortion-rights opponents marched in Washington, D.C. in what they call the March for Life. The annual event got a boost this year from the attendance of Vice President Mike Pence.

Abortion-rights opponents marched in Washington, D.C. in what they call the March for Life. The annual event got a boost this year from the attendance of Vice President Mike Pence.

Some past Republican presidents have phoned in their support for an annual anti-abortion protest in Washington, D.C. This year, President Trump sent his vice president, Mike Pence.

PENCE: ...My wife, Karen, our daughter, Charlotte, I'd like to welcome you all to Washington, D.C., for the 44th annual March for Life.

SIMON: The vice president is the highest-ranking official to ever appear at the rally in person. As NPR's Sarah McCammon reports, abortion opponents at yesterday's gathering feel energized by a new administration.

PENCE: President Trump actually asked me to be here with you today.

PENCE: He asked me to thank you for your support.

MCCAMMON: As the former governor of Indiana, Pence gained popularity among social conservatives for his plainspoken style and hard-line stances against abortion and same-sex marriage. He helped Trump shore up his support with the Republican base, many of whom were worried about Trump's temperament and history of describing himself as very pro-choice. In the end, Trump and Pence won more than 80 percent of white evangelical voters. Pence promised the crowd that Trump's victory will prove to be a victory for them.

PENCE: That's why this administration will work with the Congress to end taxpayer funding of abortion and abortion providers.

PENCE: And we will devote those resources to health care services for women across America.

MCCAMMON: Under current law, federal funding for abortions is already illegal in most cases, but Planned Parenthood does receive about half a billion dollars in federal funds each year to provide services like health exams and contraceptives to low-income women. Iowa Senator Joni Ernst told the marchers she's preparing to introduce a pair of bills aimed at diverting family planning funds away from the organization.

MCCAMMON: Abortion-rights opponents are hoping that Trump and the Republican Congress will move their agenda forward.

MCCAMMON: At the march, participants filled a section of the National Mall near the Washington Monument and poured onto nearby streets. Among them was Rose Romero, an attorney from Fort Worth, Texas, who saw Pence's appearance as a positive sign.

ROSE ROMERO: It took 44 years - right? - for someone in his position in government, the vice president of the United States, to come and celebrate life and appreciate life. That is amazing to me.

MCCAMMON: Attending the march for roughly the 10th time was Richard MacDonald from New Jersey. For him, Pence was a reassuring presence.

RICHARD MACDONALD: To be honest, Trump was not my No. 1 choice. I do like Pence's pro-life stance and, you know, he seems a more kind of levelheaded kind of guy. But with Trump, I mean, he's got the right idea. We've got to put our country first, not just on the pro-life issue but with everything. We've got to put - get jobs back into the country, and I think it's the right approach.

MCCAMMON: Already Trump has signed a presidential memorandum blocking U.S. funding to groups that provide or, quote, "promote" abortion abroad. He's promised to announce a Supreme Court nominee next week - a move activists on both sides of the abortion debate will be watching closely. Sarah McCammon, NPR News, Washington. 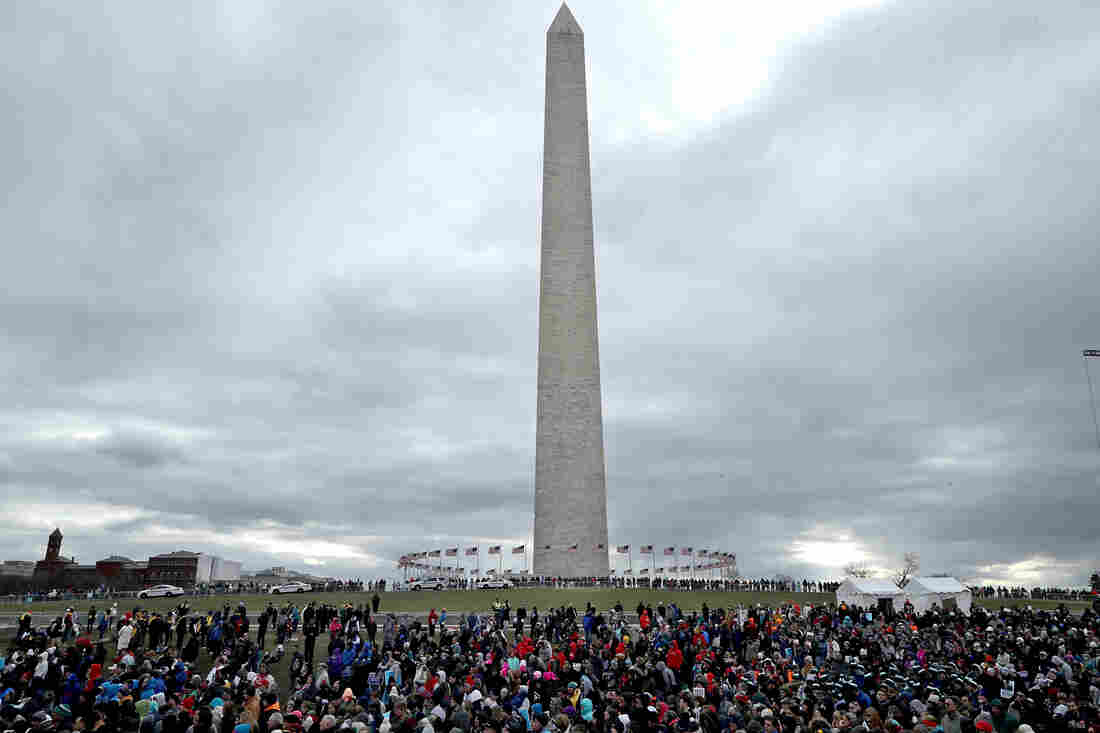 The crowd at the rally before the start of the 44th annual March for Life at the Washington Monument. Chip Somodevilla/Getty Images hide caption

Once more, the National Mall has swelled with demonstrators.

Just a week after President Trump's inauguration at the Capitol and six days after the Women's March on Washington, abortion-rights opponents were raising their voices in the nation's capital. The annual rally they call the March for Life attracted demonstrators from across the country Friday.

The demonstration, which has been held each year since the nationwide legalization of abortion in 1973, is celebrating a seminal moment in its decades-long run: a speech from a sitting vice president.

"Life is winning in America!" Mike Pence told the audience. It was a phrase he repeated often during his brief speech, emphasizing the electoral victories of anti-abortion candidates. That includes President Trump, in particular, who asked his vice president to attend the rally, according to Pence.

Americans now have "a president who I proudly say stands for the right to life," Pence told the crowd. 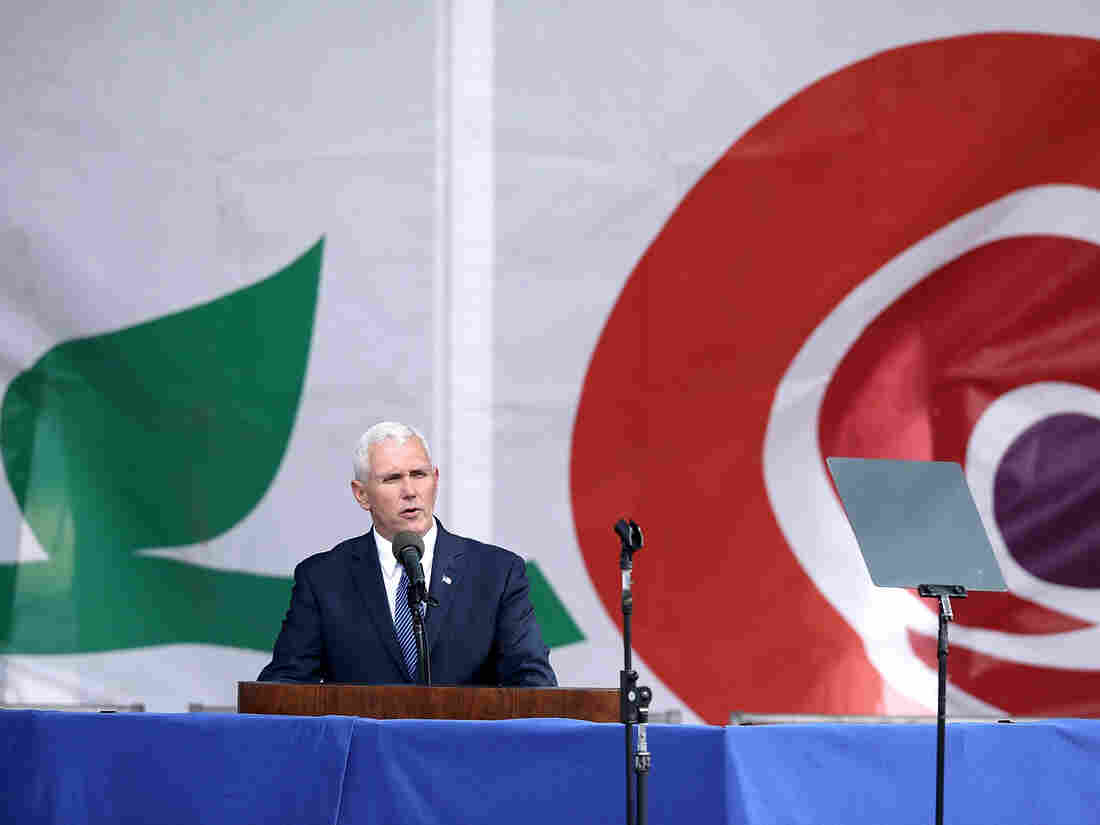 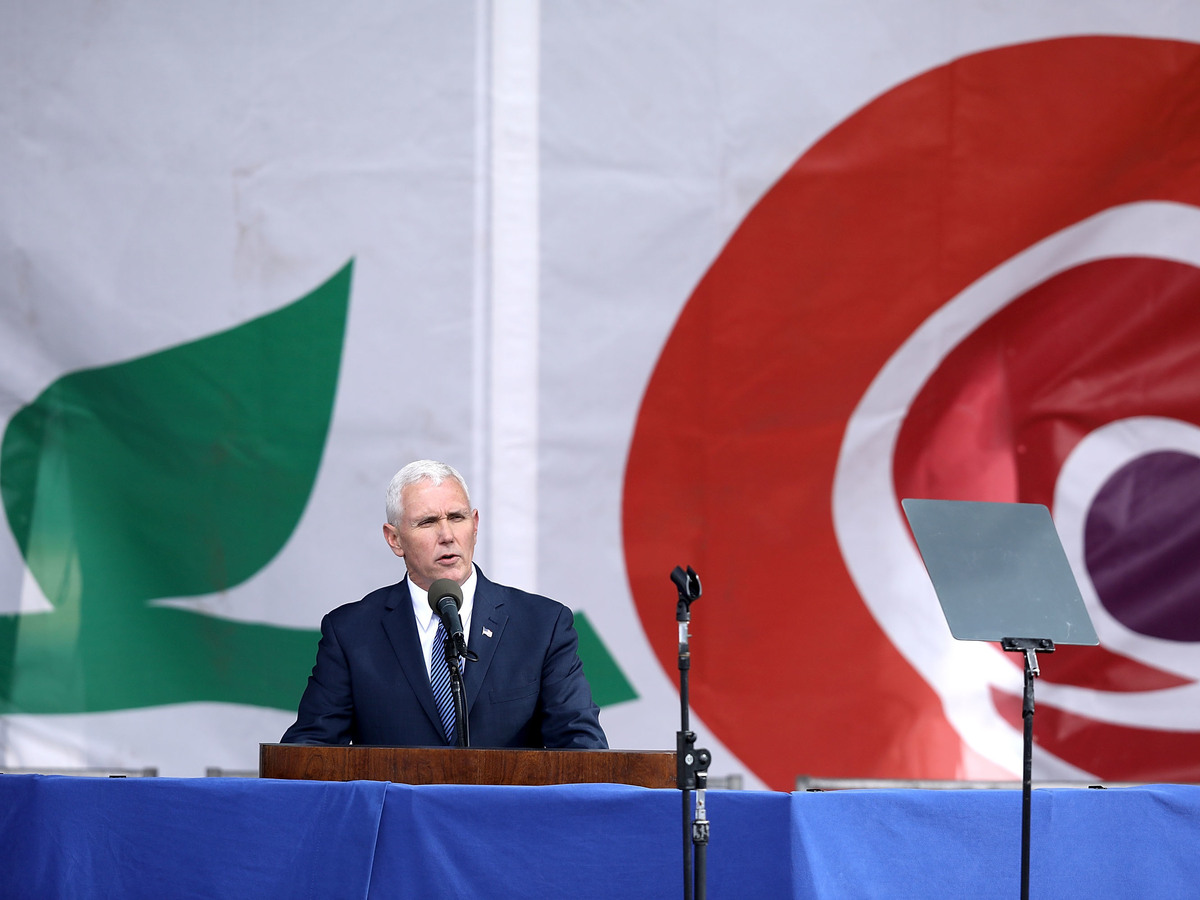 Vice President Pence addresses the rally on the National Mall on Friday.

And Pence wasn't the only representative from the White House on the rally's schedule. Presidential adviser Kellyanne Conway also addressed the demonstrators.

"It is no coincidence that the first right cited in the Declaration of Independence is the right to life," she said. "It is a right; it is not a privilege; it is not a choice. It is God-given."

Though he was not there himself, Trump tweeted a message for protesters earlier in the day: "To all of you marching — you have my full support!"

The #MarchForLife is so important. To all of you marching --- you have my full support!

The demonstration had explicitly religious overtones. It opened with a Christian rock concert and featured a prayer led by Catholic Archbishop Timothy Dolan of New York. Amid the crowd, which began gathering hours early for the rally, NPR's Sarah McCammon noted that many of the protesters' signs quote biblical verses — among a spate of other signs calling for defunding Planned Parenthood.

"We demand the immediate eradication of abortion," the musical group Transform DJs told the crowd as they opened the day's program. "As we follow Jesus, this atrocity will stop with us."

At a rally rippled with chants of "We are the pro-life generation," Sarah noted there seemed to be a wide range of ages among the demonstrators in attendance.

As Sarah has reported, the brief interlude between this rally and the march that flooded the same spaces last Saturday makes for an abrupt juxtaposition. 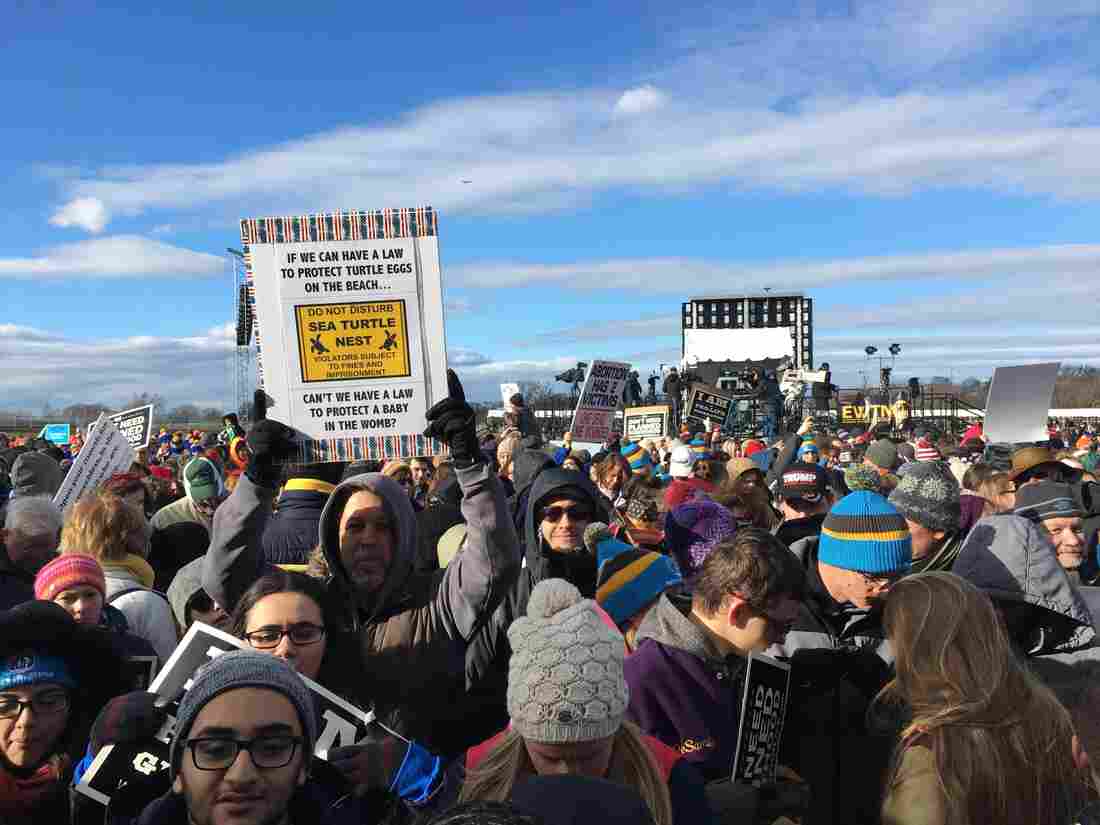 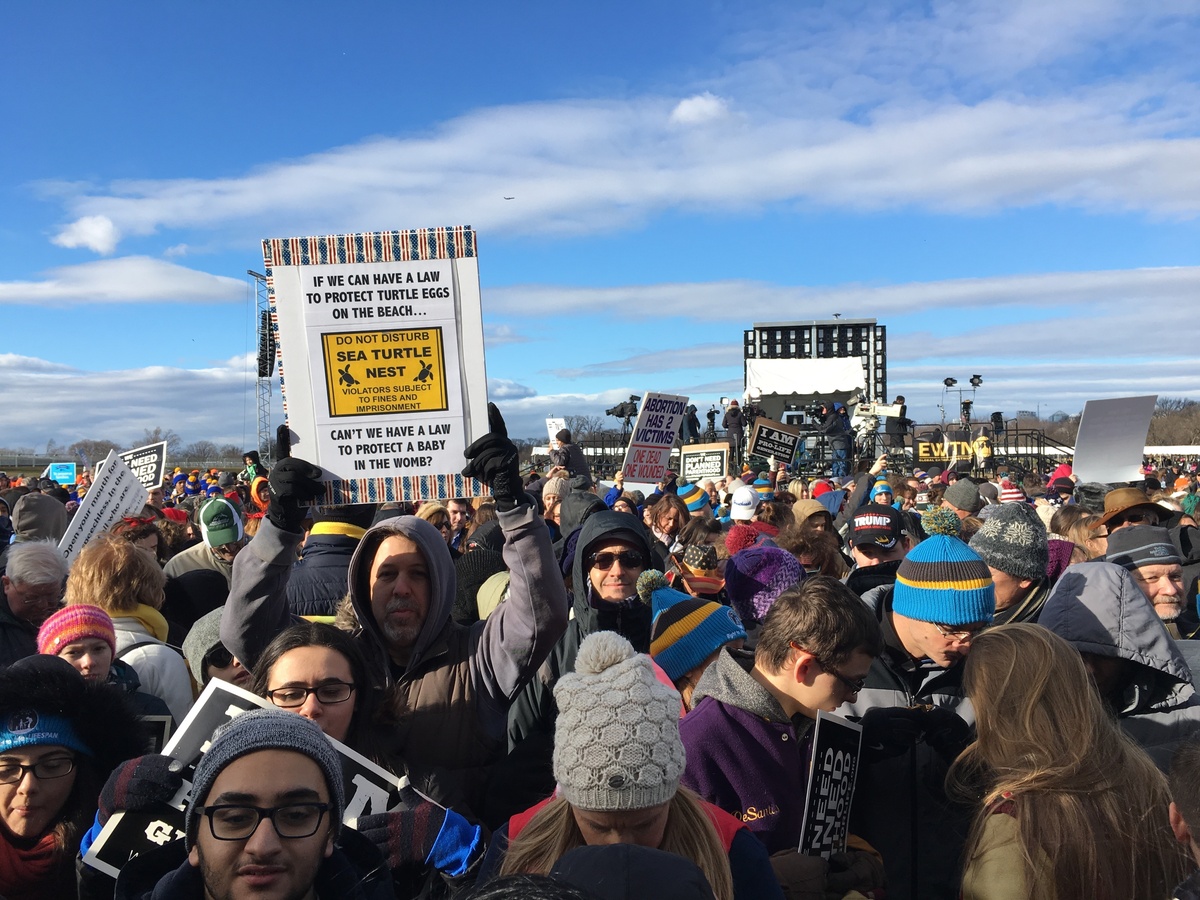 People gathered for Friday's rally in Washington, D.C., held up signs, many featuring verses from the Bible.

Among the many pillars of the platform published by organizers of the Women's March on Washington, "open access to safe, legal, affordable abortion and birth control for all people" was central. And while some groups are participating in both demonstrations, the overlap in people attending both isn't expected to be large.

The day's schedule opened with an hourlong rally and segued into a march toward the Supreme Court and Capitol buildings, where demonstrators were asked to visit their congressperson to advocate for their cause.

It kicks off a weekend of associated marches planned in several other U.S. cities, including Salt Lake City, Denver and Austin, Texas.