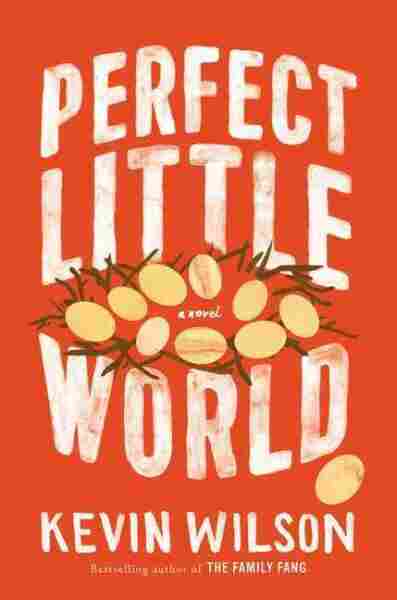 In 1996, then-First Lady Hillary Clinton published a book that drew its title from a proverb of indeterminate origin: "It takes a village to raise a child." The aphorism, which was embraced by Clinton's fans and mocked by her detractors, suggests that it's in the interest of everyone for all adults to look after the children of the world.

Of course, you're free to interpret the proverb more literally than that, and that's the path chosen by the creators of the Infinite Family Project, the idealistic commune at the heart of Kevin Wilson's Perfect Little World, the follow-up to his 2011 bestseller The Family Fang. Like Wilson's debut novel, Perfect Little World is a portrait of a dysfunctional family; unfortunately, although it's clearly written by an author with a big heart, the book ultimately suffocates under the weight of its own whimsy.

The novel starts out somewhat promisingly, introducing the reader to Izzy Poole, a recent high school graduate who's glad to leave the world of secondary education behind: "She had graduated from high school, had hated almost every minute of it; now she was on the other side and free, those four years simply a scar that would add character in the long run." That doesn't mean her life is uncomplicated, though: She's pregnant by her art teacher, who wants her to have an abortion.

She refuses, and her teacher, beset with mental illness and addiction, kills himself. Izzy doesn't know what to do — her alcoholic father won't be of any help raising the child, and her job at a barbecue restaurant doesn't pay enough to give her and her baby a good life. So when she hears about the Infinite Family Project, which promises to give her and her child lodging, food and education for ten years, she's intrigued.

The project is the brainchild of celebrity psychologist Dr. Preston Grind and his wealthy patron, a retail store heiress who admires his work. Ten children and their parents (Izzy is the only single parent in the group) will live together in a well-appointed commune, while psychologists observe them. The children don't know who their biological parents are, and won't until the fifth year of the project. "It was a crazy idea to be included in something so obviously flawed and yet so idealistic and beautiful," thinks Izzy, and she's right about the first part.

The project plays out pretty much exactly how you think it would. It doesn't take long for it to become a Peyton Place, with the residents sniping at one another. And that wouldn't be a problem for the novel if there were more than two actual characters in the book. But Wilson only seems interested in Izzy and Grind; every other person, from the parents to the children to the researchers, are interchangeable stand-ins.

And Izzy and Grind are barely characters themselves. We don't know much about Izzy except that she's tough, and we know this because Wilson tells us this repeatedly. Grind, for his part, is given a dead wife and child to quietly grieve over and some obsessive behavior that gets mentioned a few times and then ignored.

A little more clear-eyed realism might have redeemed this novel, but as it stands, it reads like the screenplay to some heartwarmingly twee movie with a ukulele soundtrack.

It doesn't help that Wilson's writing is, at its worst, wide-eyed and sentimental. At one point, Grind reflects that the project was "not unlike a real family, the ways you accepted the uncertainty and kept your heart open for whatever might follow." And when he goes for a clever turn of phrase, it often ends up backfiring: A salmon, for example, has "flesh so pink it looked like something in a children's fantasy novel," and there's a character whose "face [was] smiling so hard it looked as if a device had been implanted in her mouth." (When told a character is smiling, readers will usually understand that the smile is appearing on his or her face.)

It's clear that Wilson is a kind, gentle writer who deeply cares about the characters in Perfect Little World, but they're too underdeveloped for the reader to rate them at all, and their descriptions rarely rise above the level of cliche. A little more clear-eyed realism might have redeemed this novel, but as it stands, it reads like the screenplay to some heartwarmingly twee movie with a ukulele soundtrack. It's a misstep by a writer who's capable of much better writing than this.