Accessibility links
FACT CHECK: President Trump's Claims On Christians, ISIS And Vetting Are Misleading A day after criticism and chaos for some caused by his executive order temporarily banning Muslims from seven countries, the president took to Twitter Sunday morning to defend himself. 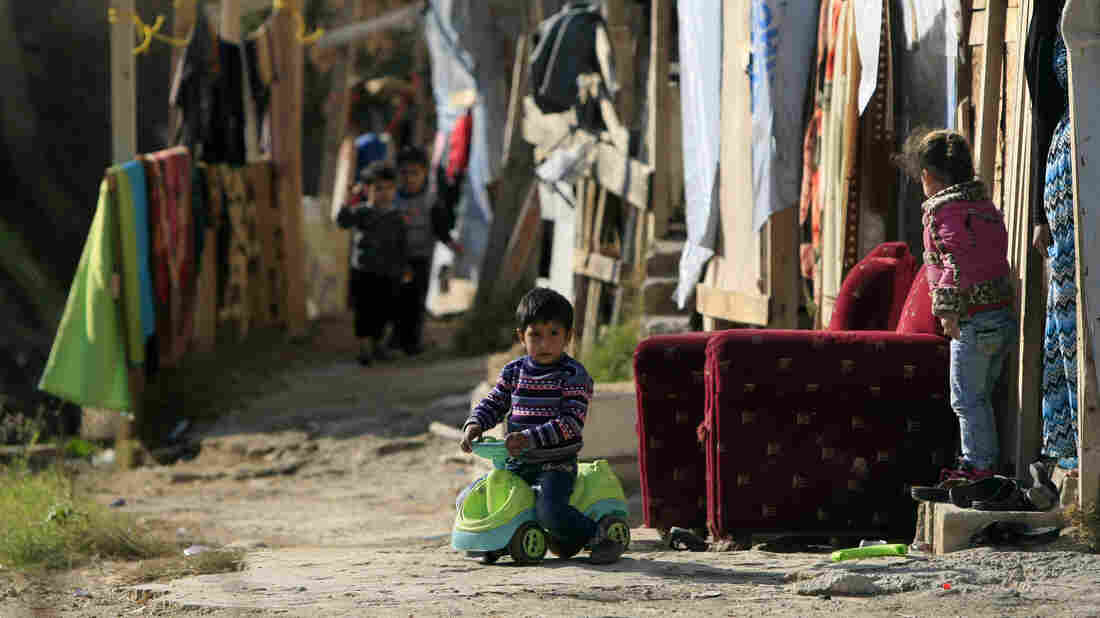 A Syrian refugee boy plays outside his family's tent in a Syrian refugee camp in the town of Zahrani, Lebanon, in December. Some 1 million Syrians live in Lebanon as refugees, according to the U.N. Mohammed Zaatari/AP hide caption 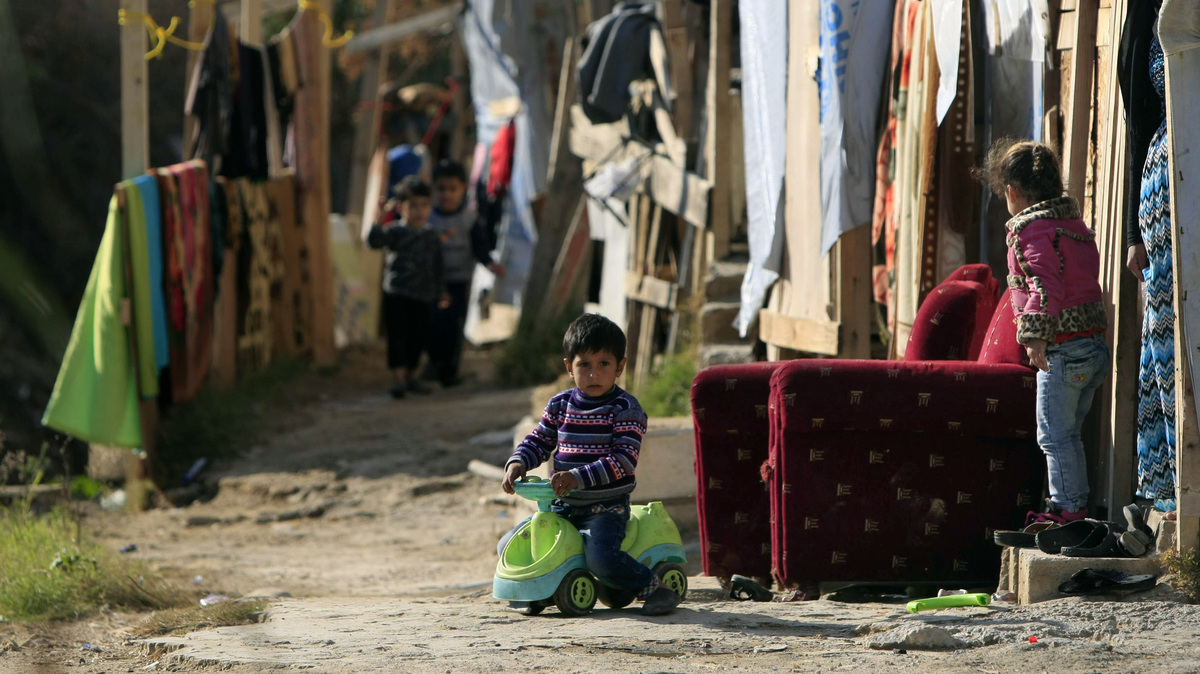 A Syrian refugee boy plays outside his family's tent in a Syrian refugee camp in the town of Zahrani, Lebanon, in December. Some 1 million Syrians live in Lebanon as refugees, according to the U.N.

It spurred protests and backlash — even from some in Trump's own party, for either mismanagement of the rollout of the order or the values it represents.

But one thing Trump's executive order did — and why many are referring to it as a Muslim ban — is indicate a carve-out for Christians. Here's the controversial language:

Pretty hard not to call this a Muslim ban unless they were going to include majority-Christian countries, which they're not. Sect. 5(b) pic.twitter.com/9sMA4KLLNl

Trump hinted that he would be prioritizing Christians before the order was released on Friday. Here's the transcript of Trump's exchange with the Christian Broadcasting Network's David Brody:

TRUMP: "They've been horribly treated. Do you know if you were a Christian in Syria it was impossible, at least very tough to get into the United States? If you were a Muslim you could come in, but if you were a Christian, it was almost impossible and the reason that was so unfair, everybody was persecuted in all fairness, but they were chopping off the heads of everybody but more so the Christians. And I thought it was very, very unfair. So we are going to help them."

It's true that 99 percent of the 12,587 refugees from Syria admitted in 2016 to the U.S. were Muslim and less than 1 percent were Christian. That would outpace Muslims' population in Syria, which is 93 percent. But that's based on 2010 numbers. With the civil war going on and the millions who have been displaced, it's nearly impossible to tell exactly what the most current percentages are.

Another possible reason for the lower percentage of Christians being admitted from Syria to the U.S. is the protection they have received from the Assad regime.

"Christians, who have been caught in the crossfire of the Arab Spring and civil war, have found a measure of protection under Assad's dictatorship.In October, the Catholic Herald reported on comments from one of Syria's leading Christians who said [Russian President Vladimir] Putin's intervention, while possibly motivated by selfish reasons, is helping and giving hope to Christians."

Why would Assad do that? His regime loves to paint itself as a protector of minorities, and there are still a large number of Christians in the Syrian capital of Damascus, for example, where Assad's government is centered.

Though 2016 was a record year for Muslim refugees admitted to the U.S., the number of Christian refugees admitted was roughly equal to that of Muslims. Domenico Montanaro/NPR/Pew Research Center/Office of Refugee Resettlement hide caption

What's more, if the implication is that the U.S. is not admitting Christian refugees or that the U.S. is making it difficult, that's not true at all. In fact, the number of Christian refugees to the U.S. in 2016 was almost equal to that of Muslim refugees — 37,521 to 38,901, according to the Pew Research Center, which is basing its numbers on figures from the Office of Refugee Resettlement at the Department of Health and Human Services.

Trump took to Twitter Sunday morning to defend himself on the need to prioritize Christians. He said they were being "executed in large numbers," reiterated his call for "extreme vetting" and warned of the U.S. turning into Europe, which has dealt with terrorist attacks and bombings since the rise of ISIS:

Christians in the Middle-East have been executed in large numbers. We cannot allow this horror to continue!

Our country needs strong borders and extreme vetting, NOW. Look what is happening all over Europe and, indeed, the world - a horrible mess!

The Obama administration did formally accuse ISIS of carrying out a genocide against religious minorities, including Christians in Iraq and Syria. Offices at the State Department have been involved in the U.S. response, though this did not include putting Christians at the top of the line for the U.S. resettlement program.

But here's the reality: While Christians in Iraq and Syria have been killed by ISIS, Muslims have been the group's victims far more frequently and represent the strong majority. Shiite Muslims are killed by ongoing waves of ISIS bombings of Shiite neighborhoods, and Shiite members of Iraq's security forces have been victims of mass ISIS executions.

But even as ISIS claims it fights for Sunni Islam, fellow Sunni Muslims have also been killed and displaced in greater numbers than Christians. That is in part because ISIS operates mostly in Sunni areas. Hundreds of thousands of Sunnis have been displaced from ISIS areas, as Sunnis, who try to oppose the group or have ties to the Iraqi government, are targeted.

And Muslims have fought ISIS more than anyone else. This includes Kurdish Sunnis and Arab Sunnis and Shiites, who are on the front lines and often allied with U.S. advisers in the battle against ISIS, as well as Turkmen Muslims. Some of the most horrific videos from ISIS have shown the killing of Sunni Muslims who have fought the group, like a Jordanian pilot and Turkish troops shown burned alive.

But that pales in comparison with the mass murder of Muslims — massacres in Iraq; 1,700 Iraqi air force cadets executed or missing from Camp Speicher, a former American military base near Tikrit; the slaughter of hundreds of the al-Sheitat tribe in Syria; and the massacre of Syrian army POWs at Tabqa in 2014.

That's not to mention the hunting down of Yazidis.

As far as Europe goes, there is an ocean between the U.S. and Europe, and the U.S. already has very strict procedures in place for refugees, as NPR's Brian Naylor has reported.