Accessibility links
Labor Unions Appear Set For More State-Level Defeats In 2017 Kentucky has already enacted a bill that would prohibit labor unions from forcing non-union members to pay fees to the union. Lawmakers in Missouri and New Hampshire are debating similar bills. 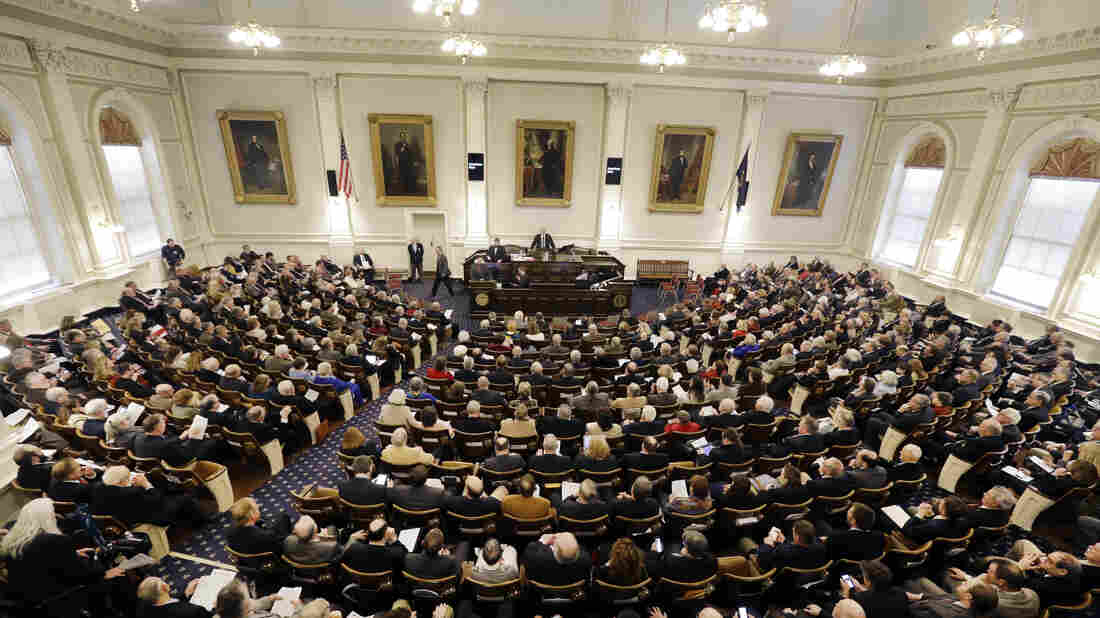 The first session of the New Hampshire House on Jan. 4, 2017, in Concord. The chamber will soon consider legislation that will likely curtail the financial strength of labor unions. Elise Amendola/AP hide caption 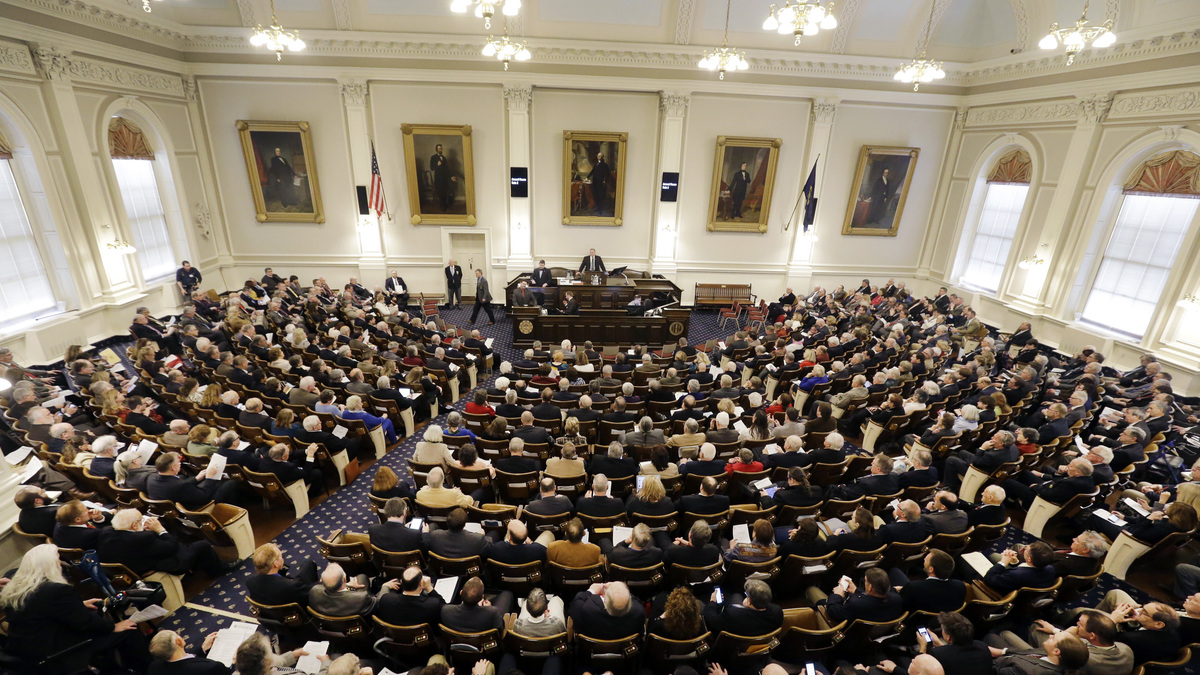 The first session of the New Hampshire House on Jan. 4, 2017, in Concord. The chamber will soon consider legislation that will likely curtail the financial strength of labor unions.

One consequence of Republican gains in the 2016 elections is playing out at the state level where organized labor appears likely to face big setbacks in the coming months.

Within days of convening this month, Kentucky lawmakers passed "right-to-work" legislation that prohibit labor unions from forcing non-union members to pay fees to the union.

It's the 27th state with such laws. State legislatures in Missouri and New Hampshire are also actively debating similar bills that could become law by February.

If all three states succeed in enacting "right-to-work" bills, it would be the most states rolling back union power in one year since 1947, according to the National Conference of State Legislatures. Success in New Hampshire would also make it the first state in the Northeast with a "right-to-work" law.

The bills are a further reflection of organized labor's falling clout. Just 10.7 percent of American workers belonged to a labor union in 2016, according to new data from the Bureau of Labor Statistics, down from 20.1 percent in 1983, when the agency began tracking the data.

Over time, the legislation is also likely to further reduce the state-level clout of Democrats, who rely on union money and volunteers during election years.

Last fall, Republicans held onto the New Hampshire statehouse and their candidate, Chris Sununu, was elected governor. After that, GOP lawmakers quickly sprang into action. They passed a "right-to-work" bill in the state Senate this month with just one vote to spare, despite boisterous opposition from union members. The legislation now heads to the House, where Republicans hold a 50-seat majority.

In Missouri, enactment of the policy became inevitable after Republican Eric Greitens captured the governorship last year. The political newcomer made signing "right-to-work" a major priority.

"We miss jobs every year and we miss businesses every year because of not being right-to-work," said state Rep. Holly Rehder, the Republican who sponsored the bill in the Missouri House.

It's an argument echoed in New Hampshire, where business executives have said they plan to give the state another look if it passes "right-to-work."

"This law would provide a solid foundation for New Hampshire to begin building a reputation as a state that welcomes companies, along with the jobs, economic stability and growth that come with them," said Tom Sullivan, an executive at firearms maker Sturm, Ruger and Co. during a recent hearing.

Still, just one-third of New Hampshire's approximately 62,000 union members work in the private sector with the other two-thirds belonging to public-sector unions (think teachers, government employees, public safety workers). With 9.4 percent of the workforce belonging to a labor union, New Hampshire is in the middle of the pack for union membership among U.S. states.

Opponents argue the laws create what's called a "free-riding" problem where non-union members reap the benefits of collective bargaining, such as higher wages and better benefits, without paying for it.

"It's just like you and I going out one night for a couple of beers. I choose the bar, we go out. We both have a couple of drinks," said Bobby Jones, which AFSCME Local 3657, a government worker union, "And then when the bill comes out, I pull out my wallet, and you don't reach for yours."

While Republicans and Democrats spar over the economic impact of the bill on wages and employment levels, its most visible impact may be during election season. Unions spent millions to successfully elect former governor Maggie Hassan, a Democrat, to the U.S. Senate even as they fell short in the gubernatorial race.

"Some people do view it as Republican payback against the role of unions in elections," said Dean Spiliotes, a political scientist at Southern New Hampshire University. "If you are reducing the level of funding through cutting their dues, that's going to have political impacts."

With reporting from Jason Rosenbaum of St. Louis Public Radio.