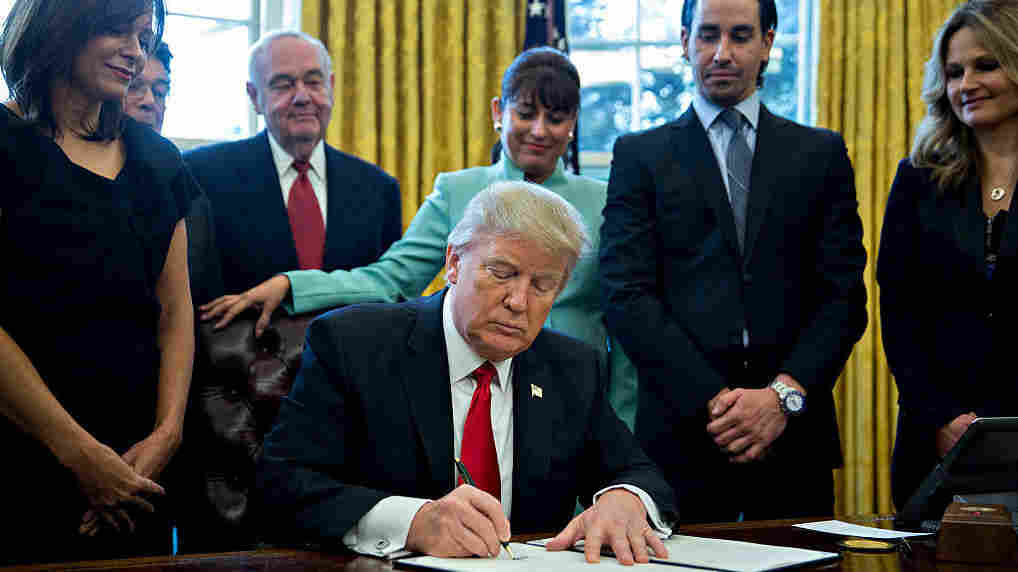 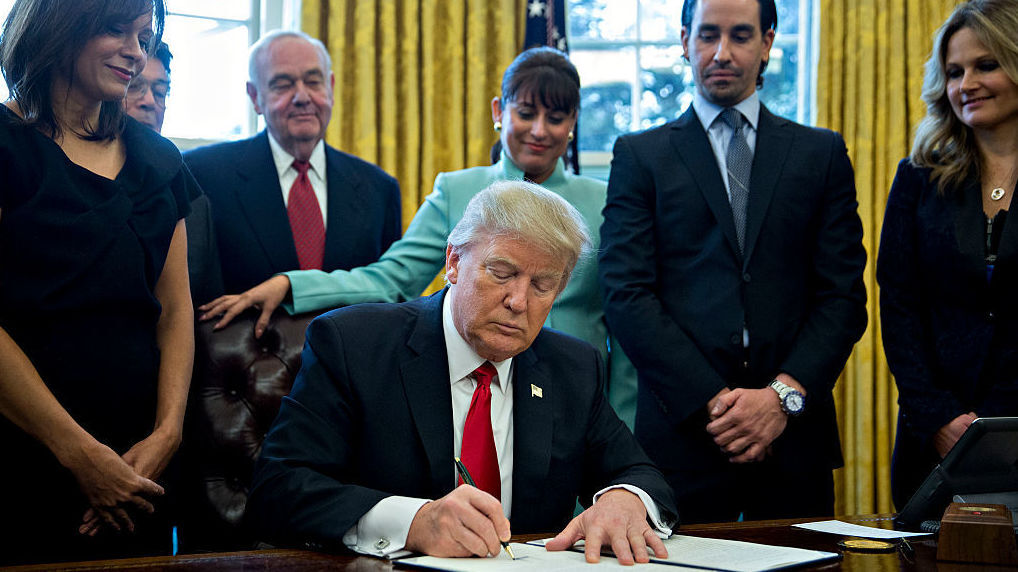 President Trump signs an executive action in the Oval Office of the White House on Monday in Washington, D.C., saying he will "dramatically" reduce small business regulations overall.

Trump signed the order during an Oval Office photo op, saying, "We're cutting regulations massively for small business and large business," adding, "This will be the biggest such act our country has ever seen."

"Unless prohibited by law, whenever an executive department or agency (agency) publicly proposes for notice and comment or otherwise promulgates a new regulation, it shall identify at least two existing regulations to be repealed."

Trump said earlier Monday that he wants to eliminate "a little more than 75 percent" of the regulations now on the books. "We don't need 97 different rules to take care of one element," he said.

The directive exempts regulations relating to the military, national security and foreign affairs.

Environmental groups however were dismayed. Center for Biological Diversity director Kieran Suckling called the new policy "as dumb as it gets." In a statement, Suckling said, "So you'll protect my drinking water but only in exchange for allowing oil drilling in national parks and more lead in my paint?"

Rolling back regulations has long been a goal of Republican and Democratic administrations, but it's not easy, as we've reported.

There are some 80,000 pages in the Federal Register, where all federal rules are published. But in order to repeal a regulation, a federal agency has to go through the same notice and comment rule making process used to formulate new regulations. And that generally takes at least a year.

There is a workaround for newly enacted regulations, the Congressional Review Act. It gives lawmakers the opportunity to repeal regulations approved in the last 60 days of the congressional session. But that, too, is a time-consuming process, and given the Senate's need to act on Trump's nominations, it's likely that only a relatively few regulations will be repealed in this manner.

One is likely to come up this week. House leaders say they will attempt to repeal the stream protection rule, an Obama administration regulation that forbids coal companies from dumping rocks and other debris created by mountain top removal mining into nearby streams.

Republicans and the coal industry say the regulation threatens jobs. The Natural Resources Defense Council says mountain-top removal mining, in which ground is blasted to access coal seams below, has been responsible for the destruction of 2,000 miles of streams in Appalachia.