Accessibility links
Trump Fires Acting Attorney General For Refusing To Defend Immigration Order The president concluded that Sally Yates had "betrayed the Department of Justice" by refusing to defend his executive order imposing a temporary ban on certain refugees and visa holders. 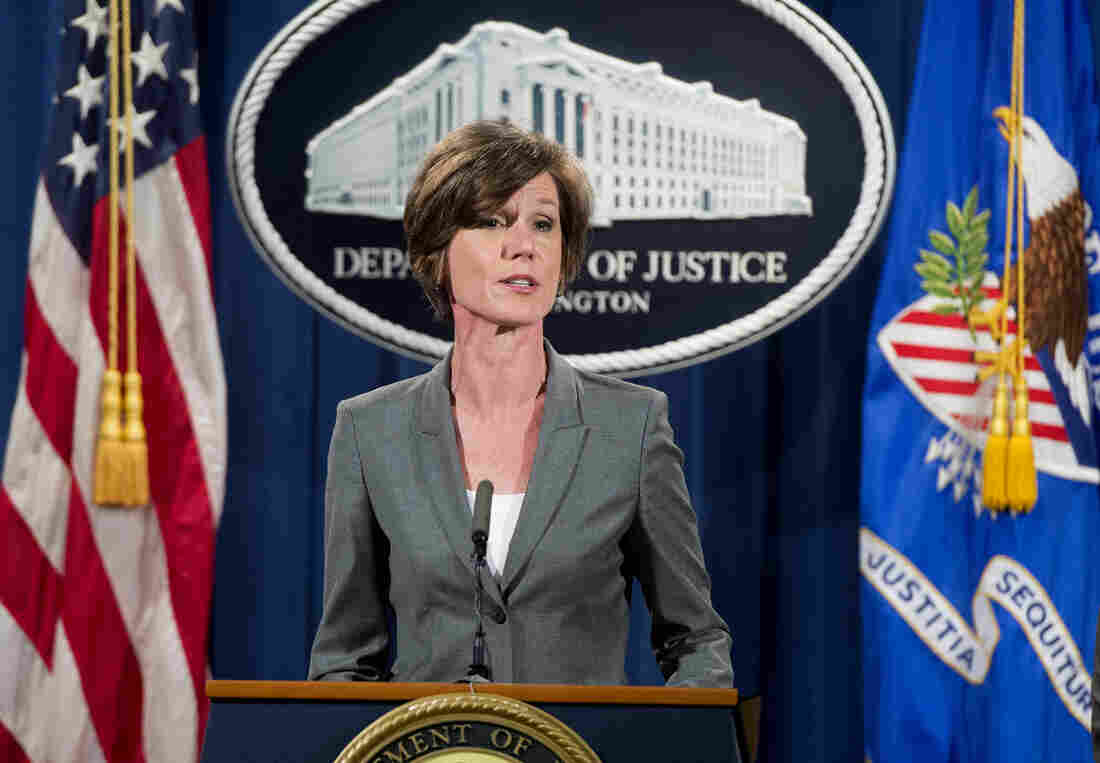 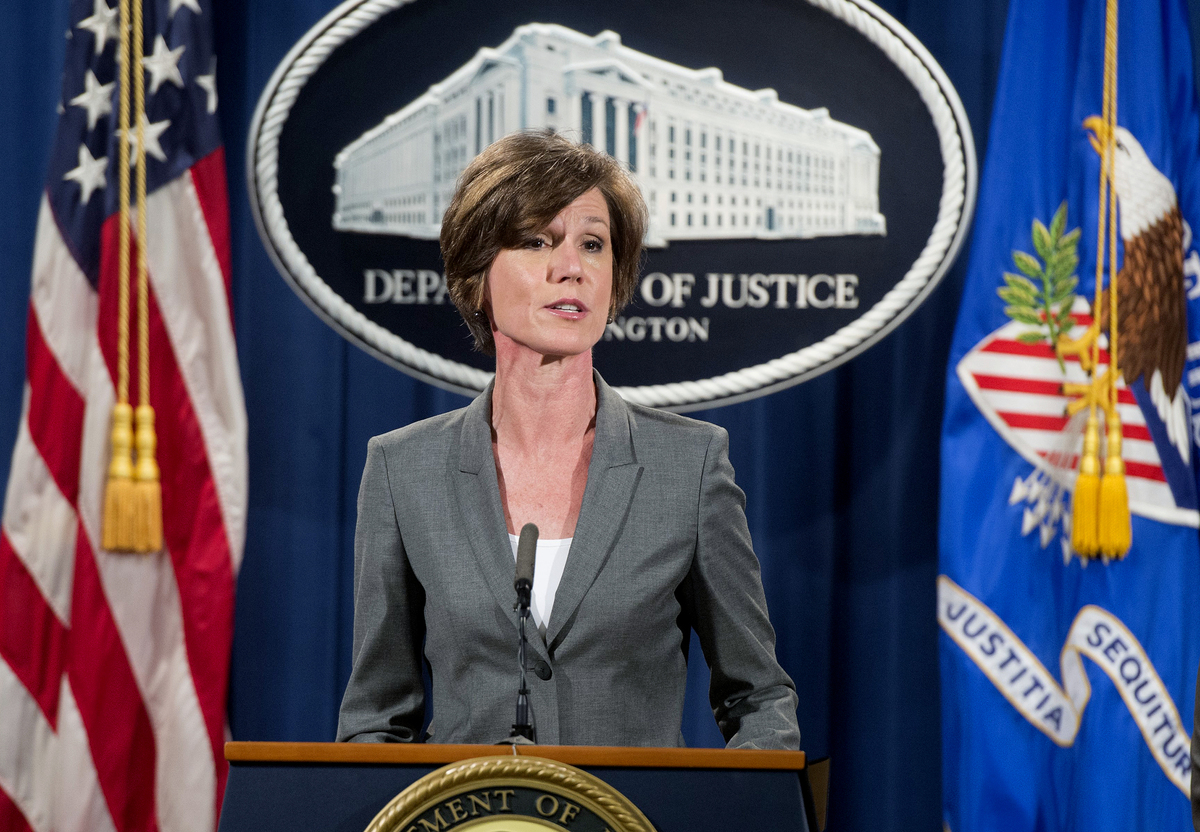 Deputy Attorney General Sally Yates, shown in 2016, has been fired for saying Department of Justice lawyers would not defend President Trump's executive order restricting refugees and visa holders from entering the U.S.

President Trump has fired Acting Attorney General Sally Yates, concluding she has "betrayed the Department of Justice" by refusing to defend his executive order that imposes a temporary ban on refugees and visa holders from seven majority-Muslim countries.

In a statement, the White House called Yates, an Obama administration holdover with 27 years of experience prosecuting corrupt public officials and the man who bombed the Atlanta Olympic park, "weak on borders and very weak on illegal immigration."

Less than two weeks after his inauguration, and only hours after Yates sent a message to department lawyers announcing that she would not defend Trump's order restricting travel and immigration from seven Muslim-majority countries, the new president removed the nation's top law enforcement officer in a move not seen since the Nixon era.

Three sources close to the Justice Department confirmed that Yates, who had been planning to leave the department in a few days anyway after her successor won confirmation, knew her decision to speak out could lead to termination. But, the sources said, after "agonizing" over the situation, she felt strongly that the immigration order could represent a thinly veiled effort to target a particular religious group, and that was worth taking a stand.

In a bombshell letter to Justice Department attorneys working on cases filed by refugees and visa holders delivered around 5 p.m. Monday, Yates said she was not "convinced" about the legality of Trump's decision to block travelers from Iraq, Iran, Syria, Yemen, Sudan, Libya and Somalia for 90 days; to suspend new refugee admissions; and to ban the acceptance of Syrian refugees indefinitely.

Her letter cited a sense of responsibility for both law and justice:

"My responsibility is to ensure that the position of the Department of Justice is not only legally defensible, but is informed by our best view of what the law is after consideration of all the facts. In addition, I am responsible for ensuring that the positions we take in court remain consistent with this institution's solemn obligation to always seek justice and stand for what is right. At present, I am not convinced that the defense of the Executive Order is consistent with these responsibilities nor am I convinced that the Executive Order is lawful.

"Consequently, for as long as I am the Acting Attorney General, the Department of Justice will not present arguments in defense of the Executive Order, unless and until I become convinced that it is appropriate to do so."

Justice lawyers had been in courts all over the country this past weekend on the opposing side of refugees and travelers, sometimes making weak arguments and stating they didn't have enough information about the executive order and its legal underpinnings.

The Justice Department confirmed its Office of Legal Counsel had done a review of the order to determine whether it was "on its face, lawful, and properly drafted."

But the objections Yates raised in her letter pointed out that the OLC review didn't consider statements "made by an administration or its surrogates...that may bear on the order's purpose."

That passage appeared to refer to comments by Trump about the plight of Christians in the Middle East, and to remarks by Rudy Giuliani, who told Fox News that Trump had wanted to impose a "Muslim ban" but wanted advisers to find a way to do it "legally." Immigrants rights advocates said Giuliani's words could offer them evidence to prove the administration had a "discriminatory purpose."

The Democratic National Committee blasted Trump for trying to "silence" Yates and predicted the confirmation of his nominee to lead the Justice Department would get tougher. Many top former DOJ officials, including Attorney General Eric Holder Jr. and civil rights chief Tom Perez, tweeted messages of support. "Person of integrity/attorney with great legal skill," Holder wrote. "Her judgment should be trusted."

But some DOJ veterans and law professors found some fault with how she handled the conflict over the immigration order. On the Lawfare blog, professor Jack Goldsmith pointed out that Yates had not clearly determined the immigration order was unconstitutional or cited other legitimate bases for refusing to defend it.

Goldsmith wrote: "she wrote a letter that appears to depart sharply from the usual criteria that an Attorney General would apply in deciding whether to defend an EO in court. As such, the letter seems like an act of insubordination that invites the President to fire her. Which he did."

The order set off chaos — and protests — across the country as many people with valid visas and legal U.S. residents with green cards were denied entry and threatened with deportation. On Saturday night, federal Judge Ann Donnelly issued a stay on the deportations of valid visa holders.

Lee Gelernt, deputy director of the American Civil Liberties Union's Immigrants' Rights Project, said of Yates' action: "This is a remarkable but welcome development and sends a powerful message that there's something very wrong with a Muslim ban."

As the news was breaking of the directive from Yates, Trump senior policy adviser Stephen Miller told MSNBC's Greta Van Susteren that Yates' decision was "a further demonstration of how politicized our legal system has become."

And inside the White House, Trump tweeted about Democratic obstruction of his nominees, "Now have an Obama AG." Less than two hours later, Yates was out of a job, notified of the White House decision via a typed letter from an assistant to the president.

Her successor, Boente, pledged to "defend and enforce the laws of our country to ensure that our people and our nation are protected," including the immigration order, which his office in Virginia has been working on for days.

It's very unusual for the Justice Department to refuse to defend a law or an executive order, though it isn't unprecedented. During the Obama administration, for example, top officials decided not to defend the Defense of Marriage Act that defined marriage as between one man and one woman. The Supreme Court eventually ruled in favor of same-sex marriage.

Under the law, as acting attorney general, Boente will be able to sign Foreign Intelligence Surveillance Act warrants.

A previous version of this story incorrectly said that Sally Yates' letter was delivered on Tuesday. It was actually Monday.