Accessibility links
Book Review: 'Six Wakes,' By Mur Lafferty In Mur Lafferty's latest, six crewmembers wake up to horror on a malfunctioning spaceship — the artificial gravity is gone, and blood floats in the air. It's up to them to find out what happened. 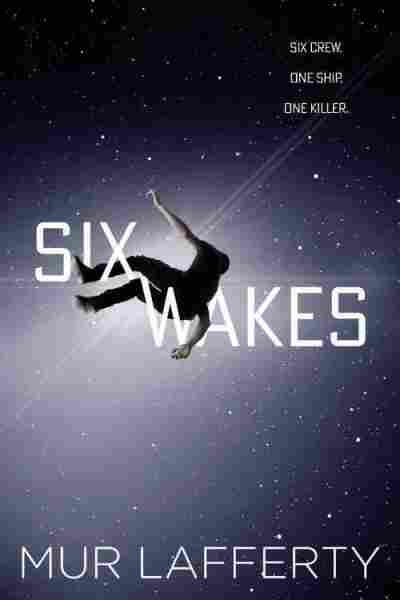 Imagine waking up on a malfunctioning spaceship: The artificial gravity is disabled. Blood floats through the air. And the corpse that blood is coming from is ... your own. Kind of. You're a clone — and your original self, along with most of your crewmates, are dead. As your ship plummets through interstellar space, off course and carrying thousands of hibernating colonists to the planet Artemis, you and your fellow clones take on a daunting task: solving the mystery of what happened to the six people from whom you were cloned. Was it mass murder? Mass suicide? Or something far more complicated and sinister?

This is the predicament facing Maria Arena and the other five crewmembers of the Dormire at the start of Six Wakes, the new novel by Mur Lafferty. It's the 25th century, and Earth is a mess. Wracked by climate change, wars over dwindling water, and clone uprisings, civilization is disintegrating — and those wealthy enough to afford a life raft book passage on the Dormire, setting out for a fresh start among the stars. Maria and company not only have to confront their terrifying new reality — that a killer may float among them — they have to deal with the submerged memories of their prior incarnations. As it turns out, each of these clones has secrets that not even they are fully aware of — and a conspiracy that's centuries old lurks behind them.

Lafferty is best known for her groundbreaking working as a geek-culture podcaster, but over the last couple years she's come into her own as a novelist — and Six Wakes drives that point home. With pitch-perfect pacing and dialogue, she unfolds the investigation aboard the Dormire with chilling grace. Flashbacks to the clones' prior lives heighten the accelerating tension, suspicions, and peril aboard the ship. And the climax comes together like a Rube Goldberg device, a beautifully constructed, circular firing squad of guilt, regret, and haunting memory that leaves no character unchanged. While forcefully character-driven, the book also digs into the hard sci-fi of gene hacking, clone politics, and the inner workings of the Dormire itself, a three-mile-long "giant metal jelly roll" inhabited by an artificial intelligence named IAN who has his own part to play in the drama.

... the climax comes together like a Rube Goldberg device, a beautifully constructed, circular firing squad of guilt, regret, and haunting memory that leaves no character unchanged.

Six Wakes is prefaced by a list of seven laws governing the existence of clones, established in the year 2282. They're reminiscent of Isaac Asimov's famous Three Laws of Robotics — and the similarity feels wholly intentional. Like Asimov's work, Six Wakes offers a set of science-fictional rules that, of course, are going to be bent, broken, and tested throughout the story. Ethical and philosophical dilemmas abound, from the definition of the individual to the nature of identity. Rather than posing them abstractly, Lafferty tethers these big quandaries to an exquisitely wound plot, one that shifts from whodunit to howdunit to whydunit with a breathless sense of escalation.

Along the way, the very notions of causality and culpability are flipped around, poked, and interrogated. If people can be cloned and imprinted with a copy of their psyches — or mindmaps, as they're called — how does that alter the parameters of personal responsibility and moral truth? As much depth as these intellectual conundrums bring to the story, Lafferty never lets them overpower what Six Wakes, at its core, truly is: a taut, nerve-tingling, interstellar murder mystery with a deeply human heart.