Accessibility links
Commentary: Trump Travel Ban On Syrians Should Exempt Kids Under 10 Amitai Etzioni, who escaped Nazi Germany as a child, proposes a way for the U.S. to bring in young Syrian refugee children. A similar past program brought in thousands of unaccompanied Cuban minors.

Commentary: Trump Travel Ban On Syrians Should Exempt Kids Under 10

Commentary: Trump Travel Ban On Syrians Should Exempt Kids Under 10 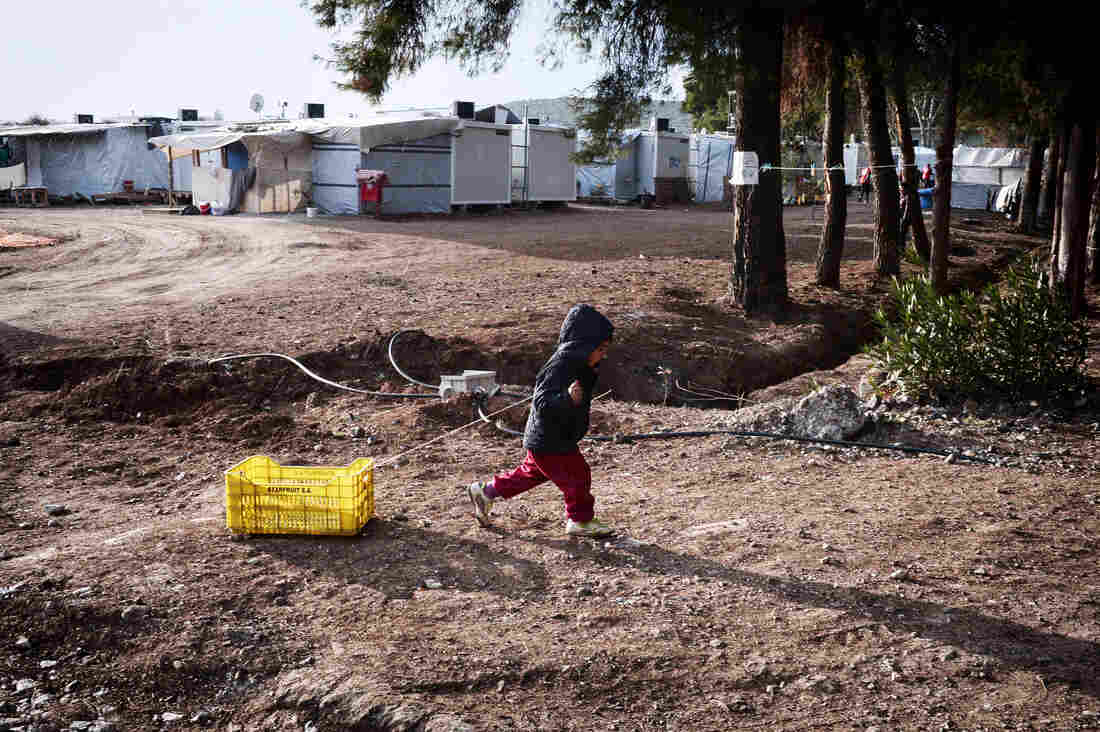 A child drags a crate at a refugee camp for Syrians and Kurds north of Athens. Children under age 14 make up nearly half of the Syrian refugees resettled in the U.S. Louisa Gouliamaki/AFP/Getty Images hide caption 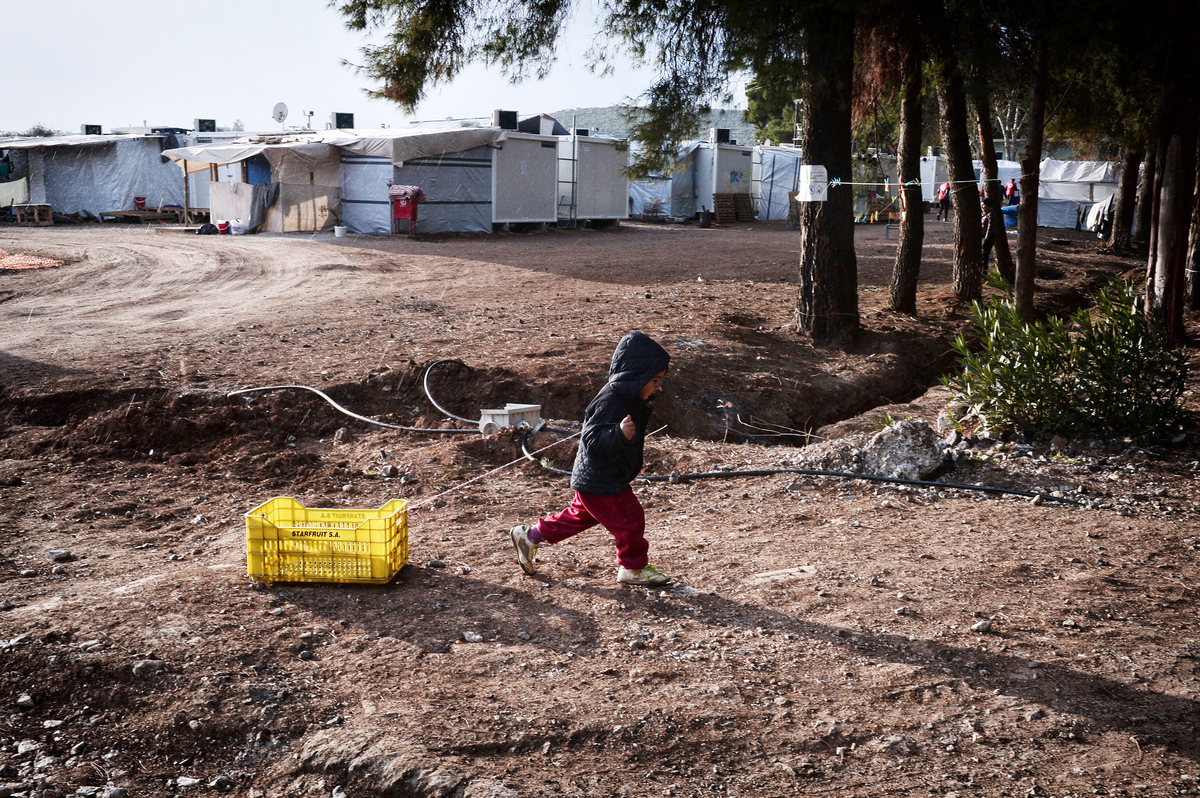 A child drags a crate at a refugee camp for Syrians and Kurds north of Athens. Children under age 14 make up nearly half of the Syrian refugees resettled in the U.S.

Here's a test as to whether the Trump administration's travel ban on refugees from seven predominantly Muslim countries is truly driven by security concerns or reflects a prejudice.

As I see it, the Trump ban on travel and immigration to the U.S., which is permanent for Syrians, should exempt children 10 years of age or younger. Nearly half of Syrian refugees already resettled in the U.S. are children under 14.

In 2015, Republicans argued that Syrian refugees pose a security risk and hence they opposed President Obama's efforts to allow a few thousand of them into the U.S. They argued that we should learn from Europe that terrorists hide among these immigrants. In response, Democrats argued that any such limitations would violate our shared ideals as Americans, and that prolonged vetting can ensure that these refugees will not endanger us.

To leapfrog this debate, I suggested that the United States should invite 25,000 Syrian families to each send one of their children under the age of 10 to the United States. Here, they would stay in foster homes until the end of the war. Their parents could reclaim them at any time and would be asked to leave instructions about whether their children should be claimed by relatives or adopted if the parents perished in the war.

I took it for granted that nobody could claim that young kids pose a security risk.

I pointed out that there is a precedent for this sort of action. During Operation Peter Pan, also known as Operation Pedro Pan, a large number of unaccompanied Cuban minors were brought to the United States between 1960 and 1962. The program was created by the Catholic Welfare Bureau.

Initially, the children were required to have a visa to enter the United States. However, on Jan. 3, 1961, the State Department announced that Cuban minors no longer needed such visas. Several major American corporations helped finance the accommodation of these children. One of those children was Mel Martinez, who grew up to become a U.S. senator and the first Latino chairman of the Republican Party.

As one who escaped Nazi Germany as a Jewish child, I also pointed to the Kindertransport program, which allowed Jewish children to leave Germany if other nations would take them. Britain agreed to shelter about 1,000 of these children from 1938 to 1940, on the assumption that the children would leave the country once the war was finished.

In 2016, I wrote to 10 law firms in Washington, D.C., and asked them if they would, as part of their pro bono program, turn this idea into a draft bill. Covington & Burling responded, and their attorney did the job. He also sent the draft bill to several members of Congress, and I wrote to others.

In the last hours of the 114th Congress, Rep. Mike Honda, a Democrat from California, introduced The Save the Children Act of 2016. It would have granted temporary visas to 25,000 Syrian children between the ages of 3 and 10.

These visas would expire six months after our government determines that hostilities have ceased and a durable peace process has begun. The grace period will allow time for the families of the children to re-establish their households in Syria before the children return. The State Department would determine when the war is over, and the Department of Health and Human Services would ensure that the foster homes are safe for children.

Bills, of course, die when a Congress expires. Rep. Honda lost his seat in last November's elections. I hence visited with the staff of some senators and met with a House member to see if they would introduce the bill into the current Congress. In the few days that have followed, no action has been taken so far.

The main issue, I was told, was who will pay for the costs involved. I recently wrote to nine major charities to ask if they would foot the bill. I had done this once before, when I served as a senior adviser to the Carter administration, and sought to raise funds for taking care of the 125,000 Marielitos who suddenly arrived in Florida from Cuba in 1980. At that time, the charities were more than willing. Indeed, Catholic Charities took care of most of these immigrants.

The new ban on travel suggests that waiting for Congress to act may be the wrong way to proceed. I see no reason, if the Trump administration is sincere that its concern is security, that it would not make an exception for Syrian children.

Otherwise, one cannot but conclude that it is acting mainly on ideological or political grounds. Indeed, given the harsh rhetoric and flood of harsh measures, making an exemption for children would help the new Trump team to show that somewhere, under all this bluster and swagger, there is a functioning heart.

Amitai Etzioni is a university professor at The George Washington University, where he is director of the Institute for Communitarian Policy Studies. He is the author of many books, including The Active Society.