Accessibility links
Trump's Supreme Court Pick: 5 Steps To Confirmation President Trump has nominated Judge Neil Gorsuch to fill the vacant ninth seat on Tuesday. There are a series of actions required to make the replacement official; it is expected to take months.

President Trump has made his pick to fill the ninth seat on the Supreme Court.

In The Senate, Trump's Supreme Court Pick Will Need 60 Votes

In The Senate, Trump's Supreme Court Pick Will Need 60 Votes

Trump's pick of Judge Neil Gorsuch to fill the seat vacated by the death of Antonin Scalia sets in motion a confirmation process that is expected to drag out for at least two to three months, if not longer. Republicans say the duration of what is expected to be a bitter partisan fight will depend entirely on how obstructionist Democrats choose to be. Democrats say the timing depends on how reasonable, or "mainstream," Trump's pick is.

Gorsuch has sterling legal credentials, but Democrats are already picking apart some of his more controversial decisions and promising a fight.

Gorsuch put corps over workers, been hostile toward women’s rights & been an ideolog. Skeptical that he can be a strong, independent Justice

Senate Judiciary Committee Chairman Chuck Grassley has said he expects the new justice to be sworn in sometime in April. But that's if everything goes smoothly.

Two questions will determine the pace of the process: Will Senate Democrats seek to block the confirmation, and if so, what is Plan B for Senate Republicans? 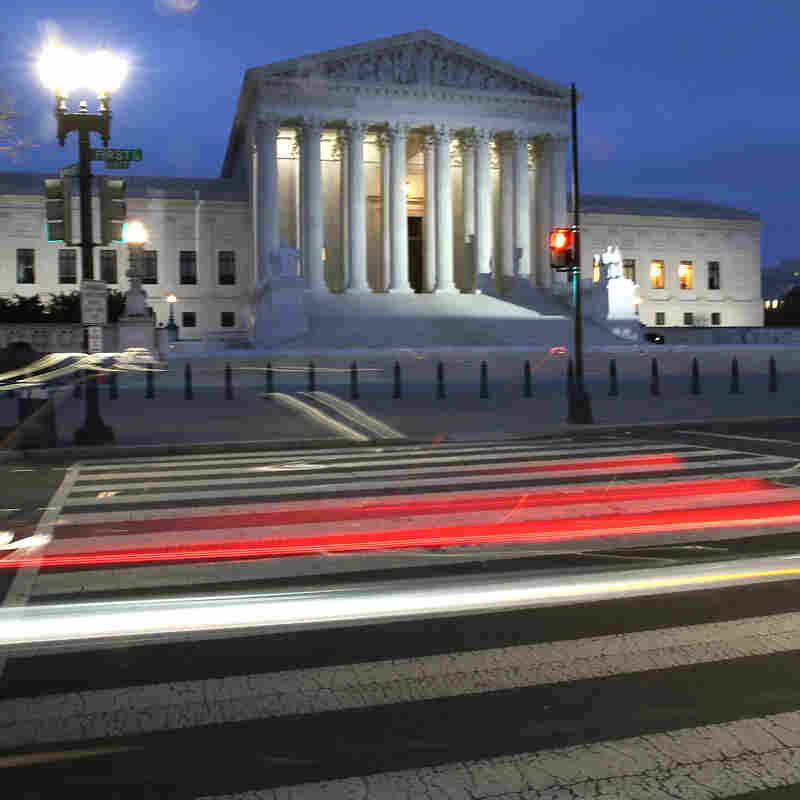 To be confirmed to the Supreme Court, President Trump's nominee has to pass a vote in the Senate Judiciary Committee and in the full Senate. Mark Wilson/Getty Images hide caption 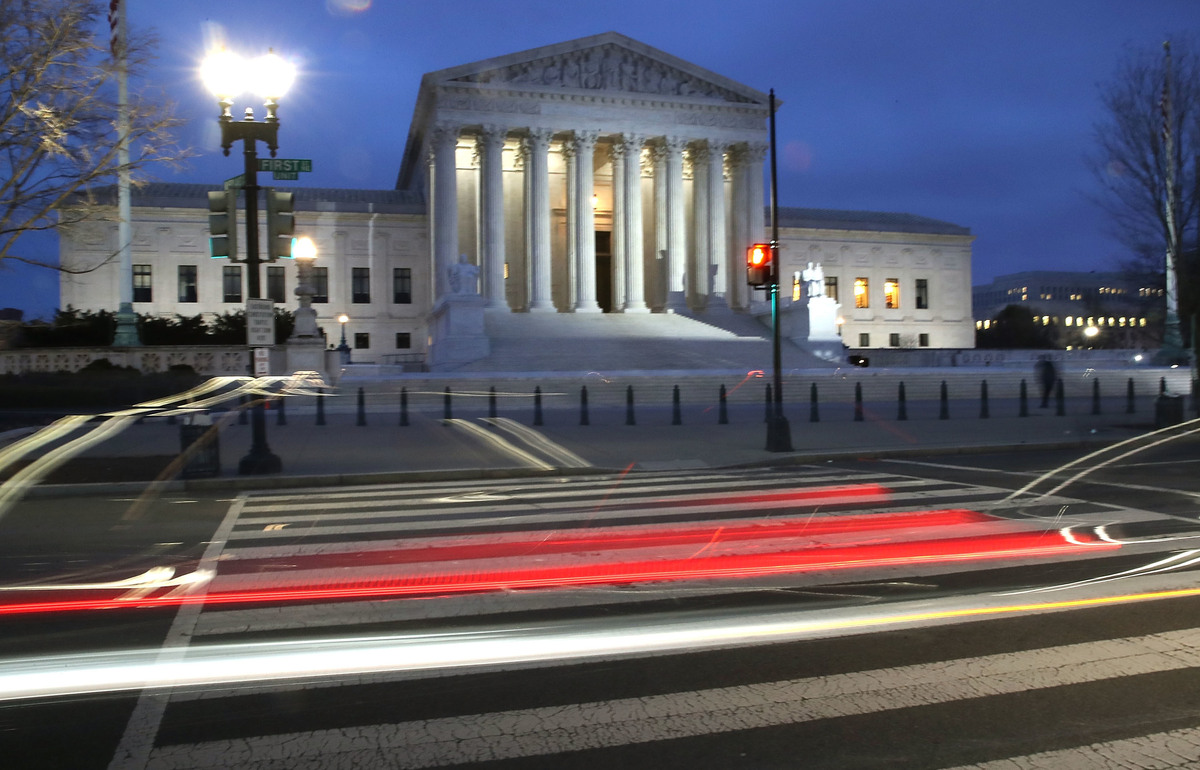 To be confirmed to the Supreme Court, President Trump's nominee has to pass a vote in the Senate Judiciary Committee and in the full Senate.

"The Senate should respect the result of the election and treat this newly elected president's nominee in the same way that nominees of newly elected presidents have been treated," said Senate Majority Leader Mitch McConnell on the floor Monday, already gearing up for the battle. "And that is with careful consideration, followed by an up-or-down vote."

Regardless of how rapidly Republicans want to wrap up the process, there are a few steps that must occur at a minimum before any Supreme Court nomination is confirmed. These are the steps Grassley estimates will take at least a couple of months.

1. Referral to the Judiciary Committee

After Trump names his choice, the nomination is referred to the Senate Judiciary Committee. The committee has 20 members. There are 11 Republicans and nine Democrats. Because it takes a bare majority of committee members to approve a Supreme Court nominee for a full Senate vote, Democrats lack the votes to block Trump's nominee at the committee level.

Before the confirmation hearing, both Republican and Democratic committee members will conduct research into the nominee's background. The nominee must fill out an extensive questionnaire, which is crafted by the top Republican and Democrat on the Judiciary Committee — Grassley and ranking member Dianne Feinstein of California. Senators will pore over the nominee's past speeches, public statements, press clippings, writings and, if the nominee is a judge, judicial opinions.

Also during this time, the nominee starts making the rounds on Capitol Hill to pay courtesy visits to senators.

This hearing can take several days — with at least a couple of days for the Judiciary Committee members to directly question the nominee, and additional days to question outside witnesses. After the proceedings, senators may submit further questions in writing for the nominee to respond to.

The committee votes on whether to approve the nominee and then "reports" its "recommendation" to the full Senate.

Next steps for Democrats

There is deep resentment among Senate Democrats about last year's refusal by Senate Republicans to hold any confirmation hearings for Judge Merrick Garland when President Obama nominated him to the Supreme Court. The seat vacated by Justice Antonin Scalia's death has remained unfilled for 11 months.

Senate Democrat Jeff Merkley of Oregon has already vowed to filibuster any Trump pick that isn't Merrick Garland. He told Politico that Republicans are now trying to fill "a stolen seat."

Other Senate Democrats have been less explicit about whether they would block the confirmation at this point.

Senate Democratic Leader Chuck Schumer has repeatedly said he will oppose any nominee who is not "mainstream." Other Democrats are echoing that sentiment.

"I just think it should be somebody like Merrick Garland to show, for the first time in the Trump administration, a willingness to be bipartisan for somebody that lost the popular vote," said Democratic Sen. Sherrod Brown of Ohio on Monday.

But there were signs after Trump made his pick that Democrats do not think Gorsuch is in the mold of Garland. And Democrats are signaling that Trump's executive order temporarily banning travel from seven Muslim-majority countries and suspending refugee admission will figure into confirmation hearing.

Sen. Patrick Leahy, the Vermont Democrat and member of the Senate Judiciary Committee, said in a statement, in part, shortly after Trump made his pick public:

"In light of the unconstitutional actions of our new President in just his first week, the Senate owes the American people a thorough and unsparing examination of this nomination. I had hoped that President Trump would work in a bipartisan way to pick a mainstream nominee like Merrick Garland and bring the country together. Instead, he outsourced this process to far-right interest groups. This is no way to treat a co-equal branch of government, or to protect the independence of our Federal judiciary."

Democrat Richard Blumenthal of Connecticut, another member of the Judiciary Committee, said before the pick, "A Supreme Court nominee, if willing to respond, should indicate that they regard this executive order as unlawful and unconstitutional."

But Blumenthal added that there was no single issue that will entirely determine his position.

President Trump said last week that he thinks Senate Republicans should strip from Democrats the power to block Supreme Court nominees. But McConnell isn't embracing the advice at the moment.

In fact, McConnell has been asked many times about whether he will change the filibuster rules this year — invoking the so-called nuclear option — so that it would take only a bare majority of senators to confirm a Supreme Court nominee, rather than the required 60.

In response to this question, McConnell has simply expressed his confidence that Trump's nominee will be confirmed.

When former Senate Majority Leader Harry Reid invoked the nuclear option in 2013 — and changed the Senate rules so it would take only a bare majority of senators to confirm all nominees except Supreme Court picks — Republicans were furious. They called Reid's move foolhardy, pointing out that one day Democrats would suffer the consequences of the rules change when they end up in the Senate minority with a Republican in the White House.

That day has arrived. And now Republicans potentially have the power to further change the rules so the minority can't even block a Supreme Court nominee.

However, it takes 51 votes in the Senate to employ the nuclear option. And Republicans may not have the votes. Already one Republican — Susan Collins of Maine — says don't count on her vote.

"I am not a proponent of changing the rules of the Senate," said Collins on Monday evening. "I hope that common sense will prevail and that we will have a normal process for considering this nominee."

Vice President Pence could supply the 51st vote for Republicans to invoke the nuclear option. But without Collins on board, Republicans can lose only one more vote.