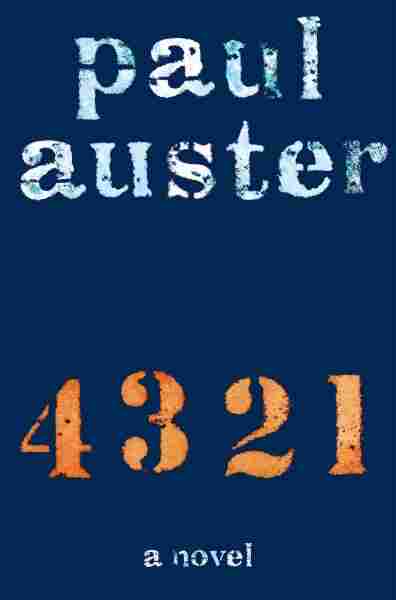 Toward the middle of Paul Auster's new novel, 4 3 2 1, young Archie Ferguson, recovering from a car accident that could have killed him, quotes the satire Candide to his optimistic girlfriend. "You're beginning to sound like Dr. Pangloss," he complains. "Everything always happens for the best — in this, the best of all possible worlds."

It's hard for Ferguson to believe that he's living in the best of all possible worlds. And he shares this belief with the three other iterations of him that make up Auster's bold, remarkable novel. The Ferguson quoting Voltaire to his girlfriend is just one of four Fergusons: "Identical but different, meaning four boys with the same parents, the same bodies, and the same genetic material, but each one living in a different house in a different town with his own set of circumstances."

4 3 2 1 follows all four Fergusons from their births to a Jewish family on March 3, 1947, in Newark, N.J. (Auster himself was born in the same city, exactly one month earlier.) Each chapter is divided into four numbered sections, corresponding with each different version of Ferguson. They're the same person, in a way, but their lives follow dramatically different paths. One dies at 13, struck by a falling tree limb during a thunderstorm; his sections after that are left blank.

There are a few constants among the different Fergusons. In each iteration, his father is a retailer and his mother is a photographer; though their careers, and their relationship, have varying degrees of success. And each Ferguson has feelings for the beautiful and intelligent Amy — in one version, they have a long-lasting romance, in others, she ends up Ferguson's stepsister and step-cousin, respectively.

A Personal 'Report From The Interior' Of Author Paul Auster

Auster's novel is never boring, but it can get confusing, especially at the beginning of the book — readers will likely find themselves flipping back: Is this the Ferguson whose father was killed in a fire, or the one whose father expands his store into an empire and thrives? But the differences become more clear as the book progresses and the Fergusons start making drastically different choices from one another.

Despite its publication date, 4 3 2 1 is very much a novel of the 20th century. The Fergusons all bear witness to the assassinations and riots that marked the 1960s and '70s, but Auster wisely chooses not to make Ferguson a Forrest Gump-type character, implausibly present for every significant historical moment. He also gives each iteration a subtle self-awareness about their parallel existences: One of them, at a fairly young age, thinks "One of the odd things about being himself ... was that there seemed to be several of him, that he wasn't just one person but a collection of contradictory selves, and each time he was with a different person, he himself was different as well."

There aren't many authors who could pull an 880-page novel like this off, and it's a little surprising that Auster manages to do it so well. That's not because he's not a great writer, but he's never been known for his loquacity or long, flowing sentences before. But he's a gifted observer, and his writing is so energetic, he makes it work with passages like this: "Adolescence feeds on drama, it is most happy when living in extremis, and Ferguson was no less vulnerable to the lure of high emotion and extravagant unreason than any other boy his age ..."

Occasionally, Auster goes on a little too long ... Nonetheless, it's a stunningly ambitious novel, and a pleasure to read.

Occasionally, Auster goes on a little too long — the novel is perhaps a bit longer than it needs to be. And his exuberant writing can get the best of him, like when he describes two teenagers kissing: "... a delicious slobber of flailing tongues and clanking teeth, instant arousal in the rambunctious nether zones of their postpubescent bodies ..." (There's no accounting for taste, of course, but I probably don't need to read the phrase "rambunctious nether zones," evocative though it may be, ever again.)

Nonetheless, it's a stunningly ambitious novel, and a pleasure to read. Auster's writing is joyful, even in the book's darkest moments, and never ponderous or showy. "Time moved in two directions because every step into the future carried a memory of the past," one of the Fergusons muses, "... and while all people were bound together by the common space they shared, their journeys through time were all different, which meant that each person lived in a slightly different world from everyone else." Auster proves himself a master of navigating these worlds, and even though all might not happen for the best in any of them, it's an incredibly moving, true journey.