Accessibility links
Neil Gorsuch Pick For Top Court Fulfills Trump Campaign Pledge, Confirms Democrats' Fears It was impossible to clone Antonin Scalia, anchor of the court's conservative wing for a generation. But Trump seemed resolved to come as close as he could, and that led him to the man from Colorado. 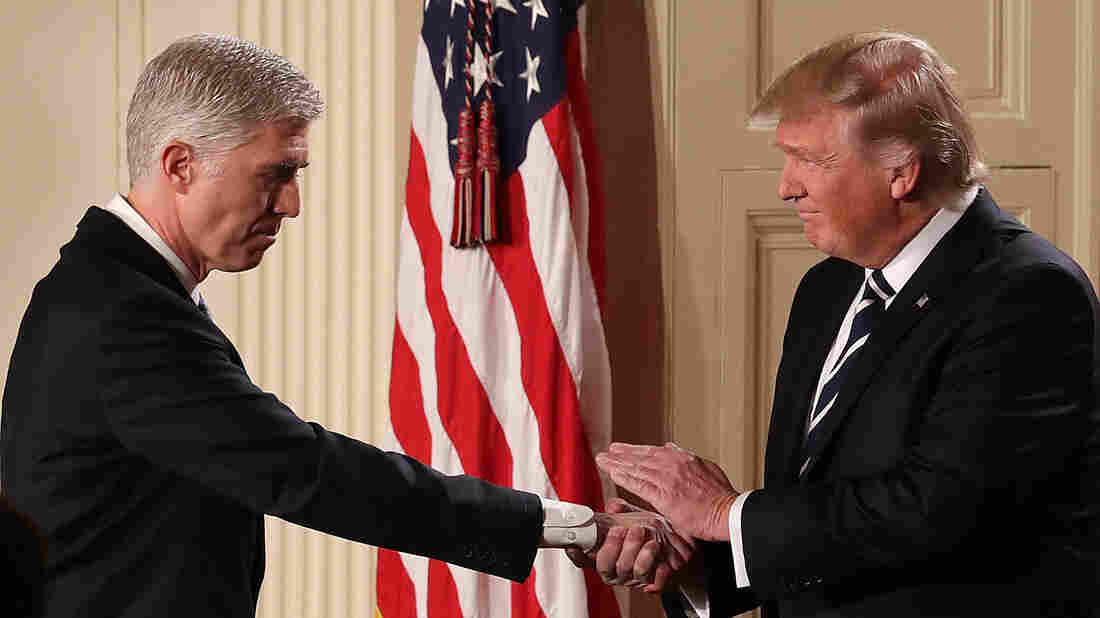 President Trump shakes hands with Judge Neil Gorsuch after nominating him to the U.S. Supreme Court during a ceremony in the East Room of the White House on Tuesday. Chip Somodevilla/Getty Images hide caption 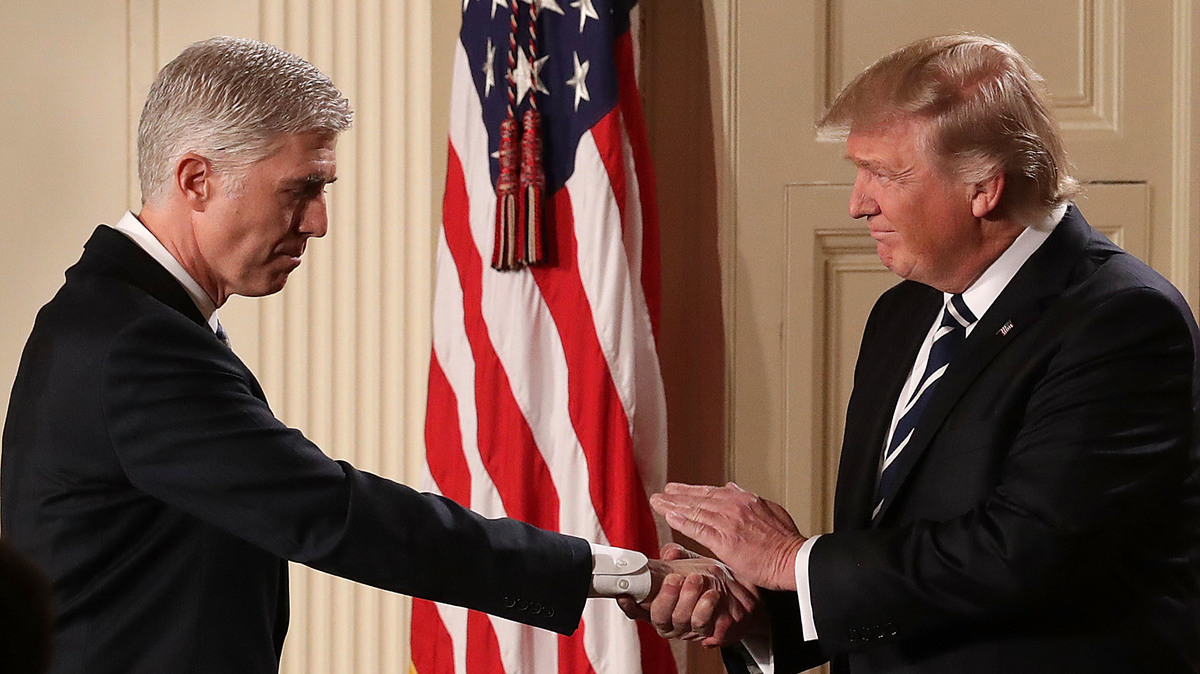 President Trump shakes hands with Judge Neil Gorsuch after nominating him to the U.S. Supreme Court during a ceremony in the East Room of the White House on Tuesday.

After a dozen tumultuous days in the White House, President Trump on Tuesday night found a way to unite his party, delight his most ardent supporters and change the storyline on his nascent presidency in a single stroke.

It wasn't magic that did it, it was the choice of Neil Gorsuch to serve on the U.S. Supreme Court.

Gorsuch is now a judge on the U.S. Court of Appeals for the 10th Circuit Court, which sits in Colorado, his home state. Gorsuch began his service at that powerful level of the federal judiciary in 2006, at age 39.

Well-regarded even then, Gorsuch won Senate approval on a voice vote. He has since emerged as a leading candidate for promotion to the high court. Indeed, he might have been chosen by any of the more conventional Republican presidential candidates in 2016.

But the night of his anointing began with the key light on the president, who strode into the East Room by himself and mounted a podium to the lectern.

"I took the task of this nomination very seriously," Trump intoned. "I have selected an individual whose qualities define — really, and I mean closely define — what we're looking for. Judge Gorsuch has outstanding legal skills, a brilliant mind, tremendous discipline, and has earned bipartisan support."

He had been on a list of 21 names Trump said had been suggested to him by conservative think tanks and advocacy groups determined to find a suitable successor to the late Antonin Scalia.

It was impossible to clone Scalia, the anchor of the court's conservative wing for a generation. But Trump seemed resolved to come as close as he could, and that led him to the man from Colorado.

"Months ago as a candidate, I publicly presented a list of brilliant and accomplished people to the American electorate and pledged to make my choice from among that list," Trump said. "Millions of voters said this was the single most important issue to them when they voted for me for president."

"I am a man of my word. I will do as I say, something that the American people have been asking for from Washington for a very, very long time," Trump said Tuesday night.

It could be said that the new president has been doing what he had promised since his Inauguration Day on a range of other issues, and none of his other actions have engendered the broad-based positive reaction that greeted Gorsuch.

In fact, the announcement had originally been scheduled for Thursday night, and it appeared to have been moved up to counter the rocky rollout of the president's new restrictions on refugees and others arriving to the U.S. from seven predominantly Muslim countries. That set of moves, which culminated in the firing of Acting Attorney General Sally Yates on Monday night, had dominated the news since Friday.

But as of late Tuesday afternoon, that storm seemed to subside, if only long enough to make room for the dramatic announcement at the White House. Instead of bringing out his nominee in a daytime visit to the Rose Garden, Trump scheduled a prime-time event and created added suspense by refusing to confirm Gorsuch's selection before that event.

It was even reported that a "runner-up" candidate, Judge Thomas Hardiman of the 3rd U.S. Circuit Court of Appeals, had been summoned to Washington and might be present at the White House event Tuesday night. The notion conjured up images of The Apprentice or other reality shows produced by Trump where contestants are kept in suspense onstage until a final winner is named.

In the end, the actual event was not nearly so dramatic or unconventional. A gathering of Republican senators, lawyers and other denizens of the judicial system filled the East Room and provided hearty applause.

Among those praising the choice of Gorsuch was Sen. Mitch McConnell of Kentucky, the Senate majority leader who kept the Scalia seat vacant last year by refusing to process President Barack Obama's nomination of Judge Merrick Garland. McConnell said the voters of November 2016 should have a say, and stuck by that even when it appeared those voters would choose Hillary Clinton to succeed Obama.

When Trump won the Electoral College, McConnell's gamble paid off. He has since made it clear he will "guarantee" Trump's nominee is not only considered but confirmed. He has only 52 Republican votes toward the 60 needed to cut off debate on a nominee, but he can either recruit eight Democrats or change the rules to make the filibuster unavailable in this instance.

Recruiting that much Democratic support might seem difficult at this stage, with the partisan fervor still running high. But 10 of the Senate's Democrats who face re-election struggles in 2018 are in states that were won by Trump in 2016. A filibuster of Gorsuch might be costly to their prospects.

On the other hand, every Democrat in Congress must deal with a high level of anger among core constituents, who are demanding relentless resistance to virtually every move Trump makes.

So the warm feelings in the East Room at announcement time had only begun to fade when the battle lines began forming on cable TV, in social media and countless emails.

The White House called Gorsuch "impossible to oppose" and produced a list of supporters from Colorado and conservative circles, studded with a few Democrats who have at least praised Gorsuch in the past.

But there was plenty of pushback from Democrats in Congress and various advocacy groups. Progressives, in particular, took issue with Gorsuch's well-known views on "religious liberty" and his willingness to let employers refuse to provide birth control services under Obamacare. Also noted was his devotion to the rights of gun owners, as well as those of campaign donors facing strictures under campaign finance reform.

Gorsuch also has been controversial for questioning the long-standing practice of court deference to the interpretive expertise of administrative agencies when laws leave legislators' intentions ambiguous.

Some Democrats also found in Gorsuch a symbol of Trump's overall approach to governing and his alleged indifference to the interests of certain constituencies.

Sen. Tammy Baldwin of Wisconsin, a state won by Trump, released a statement that said, in part: "With this Supreme Court nomination, President Trump has made it clear he has no interest in being a President for all Americans and that he is intent on creating more division in our country."

She predicted he would not find much bipartisan support, a suggestion seconded by more senior Democrats such as their Senate leader, Charles Schumer of New York, and Judiciary Committee ranking Democrat Dianne Feinstein of California.

Many of the Democrats couched their critiques in references to the lack of consideration of the Garland nomination last year. One was Pat Leahy of Vermont, the former chairman of the Judiciary Committee:

"Before Senate Republicans waged the unprecedented blockade of Judge Garland's nomination to the Supreme Court last year, the Senate took seriously its constitutional duty to provide advice and consent on nominees to the highest court in the land. But Republicans abdicated the Senate's constitutional role by choosing politically-charged obstruction, so that a president [Trump] who lost the popular vote could nominate extreme candidates to the Supreme Court."

The Garland history is indeed a bitter pill for Democrats to swallow at this moment. But they also struggle with the dilemma that has always plagued Senate minority parties when presented with an adversarial president's nominee to the court. They can resist, in all likelihood losing and looking weak in the process, or they can stand down and sidestep the fight, risking the rage of activists in their support base who are most incensed about Trump's court choice — or about Trump in general.

There was one sense in which Gorsuch did not seem to fit the profile Trump had initially sketched for his Supreme Court pick. Trump had wanted to move in a more unconventional or anti-establishment direction, but on Tuesday night he was touting his man's exceptional Ivy League pedigree.

In addition to degrees from Columbia University and Harvard Law School (both with honors, as Trump himself stressed), Gorsuch earned a doctorate from Oxford University before clerking for Supreme Court Justices Byron White and Anthony Kennedy. (If confirmed, Gorsuch will be the first former clerk to share the Supreme Court bench with the justice he once served.)

Gorsuch thanked previous mentors Kennedy and White in his remarks Tuesday night. He also described a bit of his own judicial philosophy, saying that "in our legal order it is for Congress and not the courts to write new laws."

"It is the role of judges to apply, not alter, the work of the people's representatives," he added. "A judge who likes every outcome he reaches is very likely a bad judge. [W]hen we judges don our robes, it doesn't make us any smarter, but it does serve as a reminder of what's expected of us: impartiality and independence, collegiality and courage."