Accessibility links
James Baldwin, In His Own Searing, Revelatory Words: 'I Am Not Your Negro' Raoul Peck's Oscar-nominated documentary transforms an unfinished Baldwin manuscript about Martin Luther King Jr., Malcolm X and Medgar Evers into an urgently resonant film. 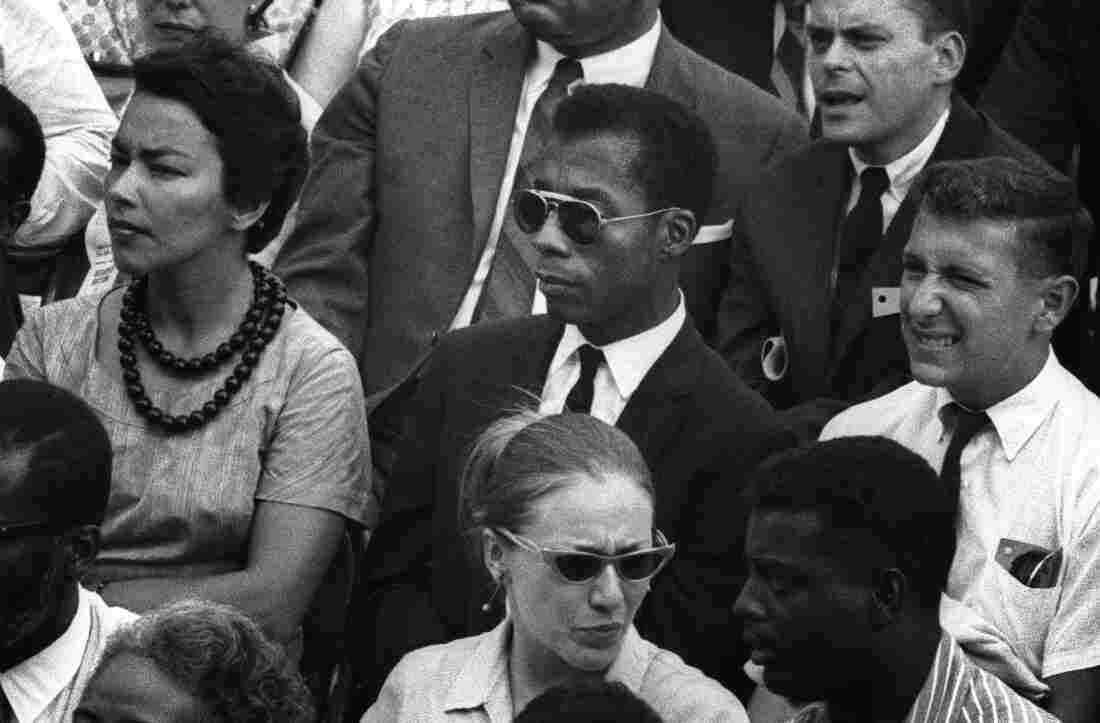 Archival footage of James Baldwin punctuates the powerful documentary I Am Not Your Negro. Dan Budnik/Magnolia Pictures hide caption 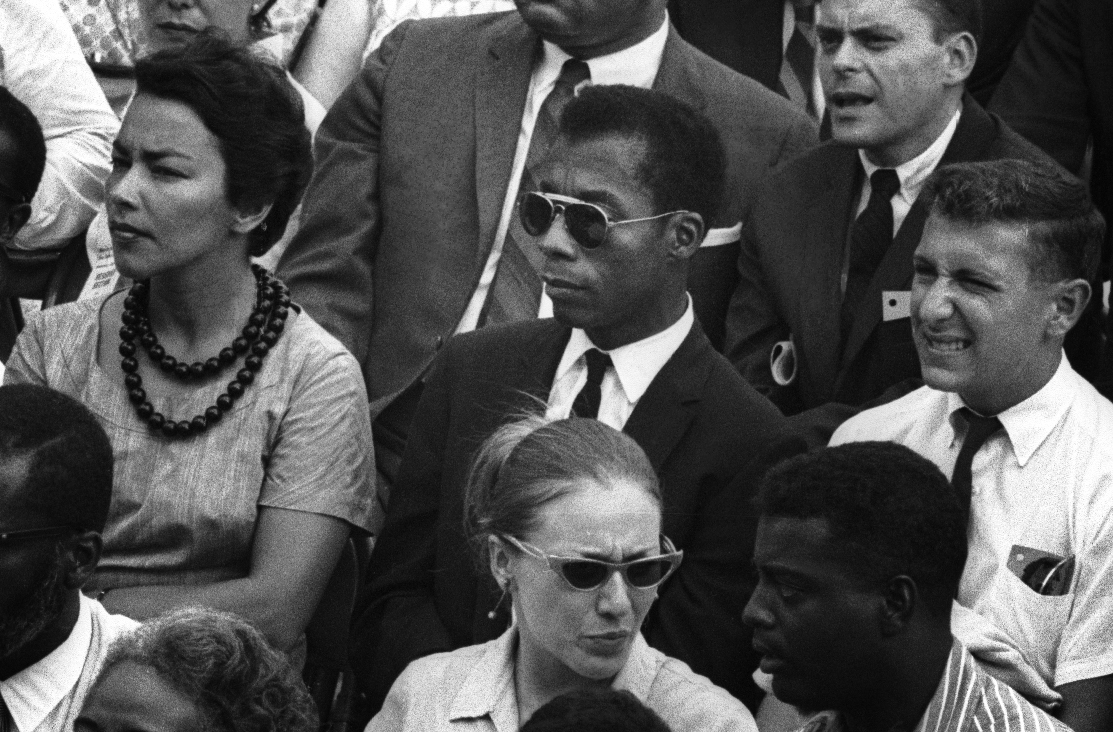 Archival footage of James Baldwin punctuates the powerful documentary I Am Not Your Negro.

James Baldwin is having a posthumous resurgence, but we are so in need of his words at this moment that it's hard to believe he hasn't still been writing every day since his death in 1987. In every genre Baldwin dabbled, from novels to political commentary to arts criticism, he found the core of our identity as a nation: a core that feeds off division and prejudice; that celebrates its own history while refusing to learn from it; and that was, and plainly remains, too painful for anyone other than him to talk about honestly.

Today's media is flush with essayists who trace a direct line to Baldwin, the most prominent being Ta-Nehisi Coates, whose bestselling sensation Between the World and Me is a grim postscript to Baldwin's The Fire Next Time, and dispels even the slim notion of hope for true racial justice Baldwin offered in 1963. But Baldwin refused to see himself as a "race writer": Instead, he framed arguments for equality as pleas to save the entire American soul from corrosive hatred and isolation. The exceptional new documentary I Am Not Your Negro, which director Raoul Peck began to work on before the Obama presidency, gives us a fresh new view on Baldwin's words, while also reminding us that the same American soul he struggled so hard to convince us was worth saving remains on life support today.

I Am Not Your Negro is also not your Baldwin CliffsNotes. Instead, Peck gives us a far more urgent, revelatory document: a visual imagining of the writer's last, unfinished manuscript. Titled Remember This House, it was to be Baldwin's personal reflection on the lives and assassinations of Martin Luther King Jr., Malcolm X, and Medgar Evers, all of whom he was close with. "I want these three lives to bang against and reveal each other," Baldwin wrote. And as these lives bang, Baldwin's (and Peck's) gaze turns: from the Civil Rights struggles of the 1960s to America's insistence on imagining great social progress where little has occurred.

The film uses only Baldwin's words, superbly narrated by Samuel L. Jackson. There are no talking heads to put them "into context," because the context is already there, in our history and all around us. Peck, working from 30 pages of raw text gifted him by Baldwin's sister Gloria, animates the prose with archival news clips, still photographs, and scenes from popular films of Baldwin's time. And he also, with dreamlike continuity, grants brief passage into the modern day: young black men shot by police, the Black Lives Matter protests, a montage of superficial apologies from white politicians. Robert Kennedy accurately predicts that America will see a black president 40 years from his time, and then Baldwin takes apart the idea that we had to wait so long in the first place.

Baldwin was also a voracious consumer of pop culture. Some of the film's most intriguing passages muse on the history of onscreen black identity from Stepin Fetchit to Sidney Poitier, the latter characterized as a kind of panacea to comfort white people. (Poitier's escaped convict in The Defiant Ones jumps off a train carrying him to freedom in order to save the white escapee he's been chained to for the entire film. Baldwin's response: "Get back on the train, you fool!") These bits are where you realize just how much of a documentary's strength depends on its editing. Would Baldwin's memory of finding a black woman who "looked exactly like Joan Crawford" have carried as much symbolic weight were it not overlaid on the perfect clip of the lily-white Crawford boogying in Dance, Fools, Dance?

Peck renders his subject's prose with brisk pacing, without turning Negro into a soundbite film — a remarkable task, given how much Baldwin structured his sentences with the intention of his audience getting to reread them, picking over their bones for protein. It helps that the film frequently leans on Baldwin's gift for oratory, as he delivers his own message on college campuses and late-night television, with his wry smile and searching eyes. This approach is dense and yet accessible, and seems to be a direct challenge to Baldwin's own musings that television "weakens our ability to deal with the world as it is, as we are." (That Jackson, the reigning king of escapist entertainment, is the one reciting these words adds a delicious layer of irony.)

It is easy, in a time when protest feels urgent and the past seems to have vanished, to get swept up in Baldwin's essays, and in so doing to forget that he was also a peerless storyteller. One flaw to the film is that, by painting such a convincing portrait of Baldwin-as-polemicist, it neglects that only a great novelist could make those arguments as forthright and necessary as he did. In books like Another Country and Giovanni's Room, he could take manners of race and sexuality no one was talking about in public and render them with such finely wrought passion as to rip their invisibility cloaks to shreds. Negro wants to anoint Baldwin as the voice of reason in our troubled, divided times, but we need to remember he valued the power of stories and chastised those who did not. Of Uncle Tom's Cabin author Harriet Beecher Stowe, he once wrote, "She was not so much a novelist as an impassioned pamphleteer."

Though it was just nominated for a Best Documentary Oscar, Negro seems at risk of being overshadowed in the public eye by the two more popular nominees that broadly deal with that discordant, shapeshifting topic we call "race relations": the sweeping yet granular true-crime saga O.J.: Made in America, and the fiery mass-incarceration lecture 13th. All are worthy of attention. But to dismiss all three movies as different pages of the same pamphlet — or to declare that Negro is only relevant now because it's Black History Month — is to continue to misunderstand Baldwin's message. He wasn't lecturing to "white America" or passing instructions to "black America"; he truly wanted everyone to confront the same narrative together, to stop hiding behind fictions and make some sense of the country. Did he succeed? Well, when confronted with such pressing, vibrantly cinematic power built entirely from decades-old words, we must ask ourselves exactly why, in 2017, these words may as well have been written for the first time.