Accessibility links
Review: Tinariwen, 'Elwan' After the chaos, warfare and corruption of the past several years in their native country, the Tuareg guitar gods deliver a more bitter message. 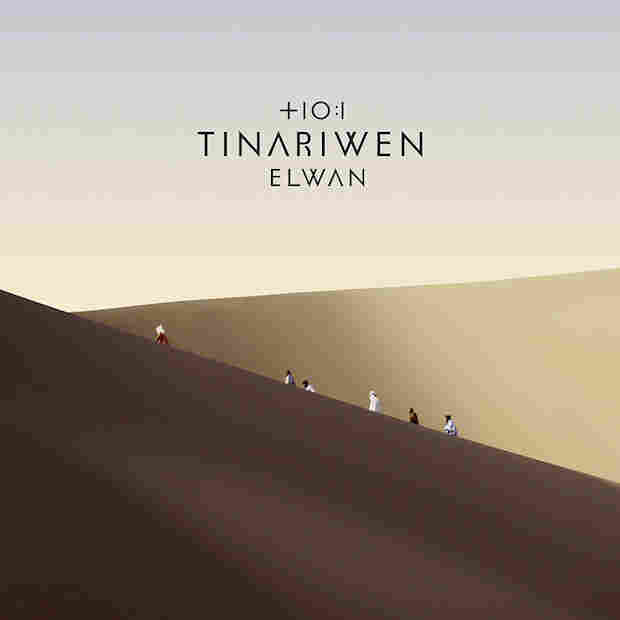 Since the Tuareg guitar band Tinariwen from Mali was launched into the international stratosphere nearly 20 years ago, it's become something of a rite of passage for rock musicians to guest on their albums. This time around, for Elwan (Elephants), their eighth international release, they're joined by Kurt Vile, Mark Lanegan (formerly of Screaming Trees), Alain Johannes (formerly of Queens of the Stone Age) and guitarist Matt Sweeney, who's worked with everyone from Will Oldham to Run The Jewels.

But that's all a sideshow: The main draw continues to be Tinariwen itself — with the band's swirling guitars, rhythms inspired by the gait of camels and gutturally declaimed poetry.

The band has become globally peripatetic — partly due to their near-constant touring, but also because the situation in their home community in northern Mali continues to be incredibly dangerous and culturally toxic. As a result, the recording sessions for Elwan were split between the Paris suburbs, a studio in Joshua Tree, Calif., and a southern Moroccan town called M'hamed El Ghizlane, an oasis very near the Algerian border and home to its own Saharan music festival.

Time and turmoil have both taken a serious toll — and the new music on Elwan reflects that hard reality. When Tinariwen started coming into the eye of international tastemakers nearly two decades ago, the band's political thrust revolved more around the Tuareg people's struggles to achieve political and social equality within the various Saharan countries they inhabit — and their decades-long push toward self-determination, possibly even by establishing their own nation.

As on past albums, the group's lyrical concerns focus on the Tuareg, their culture and their people's tenuous future. The tenere — the desert itself — is not just a backdrop or even subject matter in their songs. Usually performing in their native language, Tamashek, they sing direct addresses to those endless sands. In fact, the band's name, Tinariwen, is just the plural of "tenere" in Tamashek. Listen to the beginning of Elwan's second track, "Sastanaqqam" (I Question You): "Tenere," they sing, "can you tell me / of anything better / Than to have your friends and your mount / And a brand-new goatskin, watertight ... To know how to find water in / The unlikeliest of places?"

But the chaos, warfare and corruption of the last several years has been tremendous. They've endured seeing a fellow ethnic Tuareg tried in The Hague for war crimes against cultural monuments in northern Mali, watching a former friend of the band emerge as a key leader of the Islamist group Ansar Dine, and even having a member of their own band kidnapped by Ansar Dine (and later released). Even this week, the news continues to be discouraging: Mali's vaunted Festival in the Desert, which served as a major launchpad for Tinariwen — and which had been organized entirely in secret to take place this past weekend — was cancelled at the last minute by government officials, due to terrorism fears.

Unsurprisingly, Tinariwen's message has grown more bitter than on past albums. "The strongest impose their will / And leave the weakest behind," they sing on the track "Tenere Taqqal" (What Has Become Of The Tenere). "Many have died battling for twisted ends / And joy has abandoned us, exhausted by all this duplicity." The song also includes another telling line that references the album's title: "The tenere has become an upland of thorns/Where elephants (elwan) fight each other / Crushing tender grass / underfoot."

And yet — there is still sweetness, and hope, on Elwan. There are outright love odes like "Hayati" (My Life), which is sung in Arabic, and songs like the spare solo "Ittus" (Our Goal), a voice-and-guitar composition performed by one of the group's founders, Hassan Ag Touhami, that is just three lines long: "I ask you, what is our goal? / It is the unity of our nation / And to carry our standard high."

One of the album's most rollicking songs on Elwan is "Assawt" (The Voice Of Tamashek Women). It's a paean to Tuareg women that calls for their freedom — a summoning that still rings out clear and true over the desert sands.