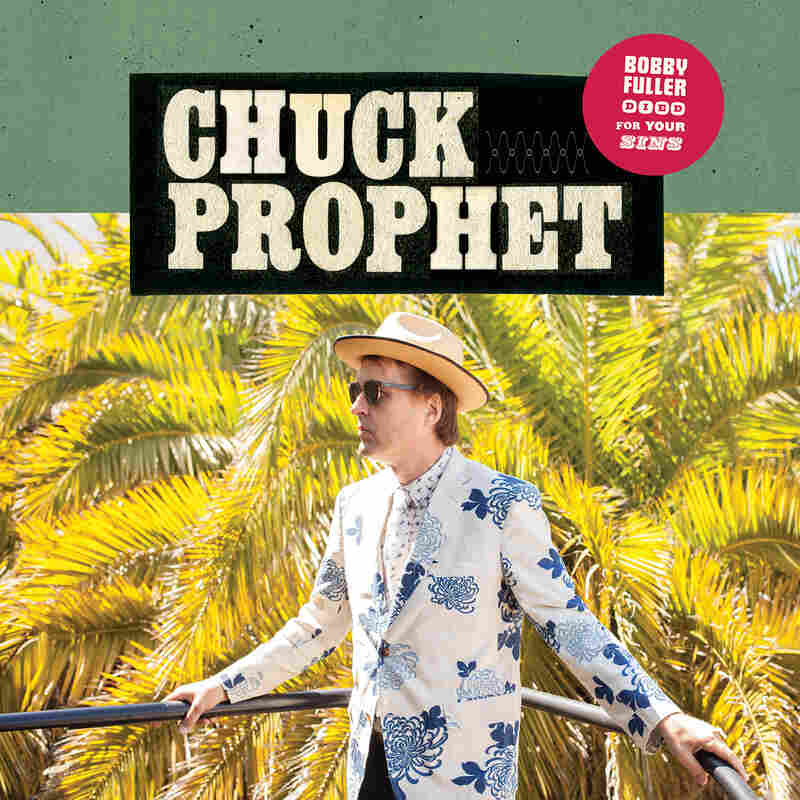 Chuck Prophet's whip-smart new collection, Bobby Fuller Died For Your Sins, begins with a celebration of the enigmatic one-hit rock curiosity who sang "I Fought The Law" in 1964 and then, shortly after the song took off, was found dead in his car at age 23.

Fuller's death remains a mystery, and perhaps as a result, his song and story has resonance for record geeks like Prophet. He begins the second verse of "Bobby Fuller Died For Your Sins" by talking about the experience of listening: "I hear the record crackle, the needle skips and jumps," he half-sings as pedal steel guitar careens Byrds-like overhead. That leads to Prophet's central confession, and the record's animating theme: "I never saw a movie that moved me half as much."

With that, we're off, riding shotgun down some mythic highway with a rock true believer who is not sure of much beyond the primacy of two guitars-bass-and-drums and a handful of raggedly hacked chords. On this journey, the 53-year old Prophet – whose discography includes the pioneering psychedelic Americana of Green on Red and a stack of strong solo albums – is not hunting for transcendent wisdom. He's just taking in the view, with occasional detours into communication breakdowns ("Coming Out in Code") and assorted other paradoxes of life (the rousing "Rider or the Train").

Prophet has described his new work as "California Noir." With a few exceptions – the gloriously leering "Your Skin," a gem of a song that recalls X at its most impassioned – the record bears little resemblance to the stylized L.A. noir of James Ellroy novels. It's murky, coated with fog and shadows – in some ways, it picks up where Prophet's high-concept history of San Francisco, 2012's Temple Beautiful, left off. Its narratives are often dark: Several songs are set in the aftermath of gun violence – one pays homage to Alex Nieto, a Bay Area man killed by police; another tells of the tragic encounter between a shopgirl with a song in her heart and a brutal "Killing Machine" who offs people at a store as casually as others buy gum.

Mostly, though, Prophet is drawn to the romance of rock culture – the enduring ritual that boils down to "drop needle, seek redemption." (Indeed, your enjoyment of Bobby Fuller may depend on your tolerance for rock songs about enjoying rock songs.) Prophet has been on the road forever, he's spent lifetimes amongst its traveling circus of savants and misfits. Sometimes his passion gets misplaced: The album's most obvious misstep is "Bad Year for Rock and Roll," which deserves an award for stating the obvious, over and over again. Its chorus ends with a telling couplet: "I wanna go out, but I'll probably stay home."

It's an odd moment, especially since the rest of Bobby Fuller deals with what happens when you don't stay home. The unsparing, possibly autobiographical "We Got Up and Played" finds Prophet and band standing around after soundcheck, facing the prospect of another night in a grimy club. Prophet goes acidic as he sketches the scene's less-than-glorious aspects – the cast of characters includes "the bartender standing in the middle of the street with his pants around his neck." It's slightly sordid, sure, yet the song captures something fundamentally compelling about people who, despite long odds and great indifference, climb onto a stage and attempt to create music night after night.

"We plugged in our guitars and tried to make it rain," Prophet sings with all the wistfulness his road-roughened voice can muster. The song comes near the end of the record, after he's used the guitar to make it rain, and hail, and everything else. The ragged, barbed-wire sound makes clear that he doesn't want the gold commemorative watch or bonus points for surviving the rock 'n' roll gauntlet. All he wants is the chance to go out and do it some more.