Accessibility links
Trump's Supreme Court: Neil Gorsuch Is A Scalia 'Originalist'. What Is Originalism? Judge Neil Gorsuch was friends with the late justice and subscribed to the judicial philosophy of "originalism" he popularized. So what is it, exactly? The doctrine has plenty of critics. 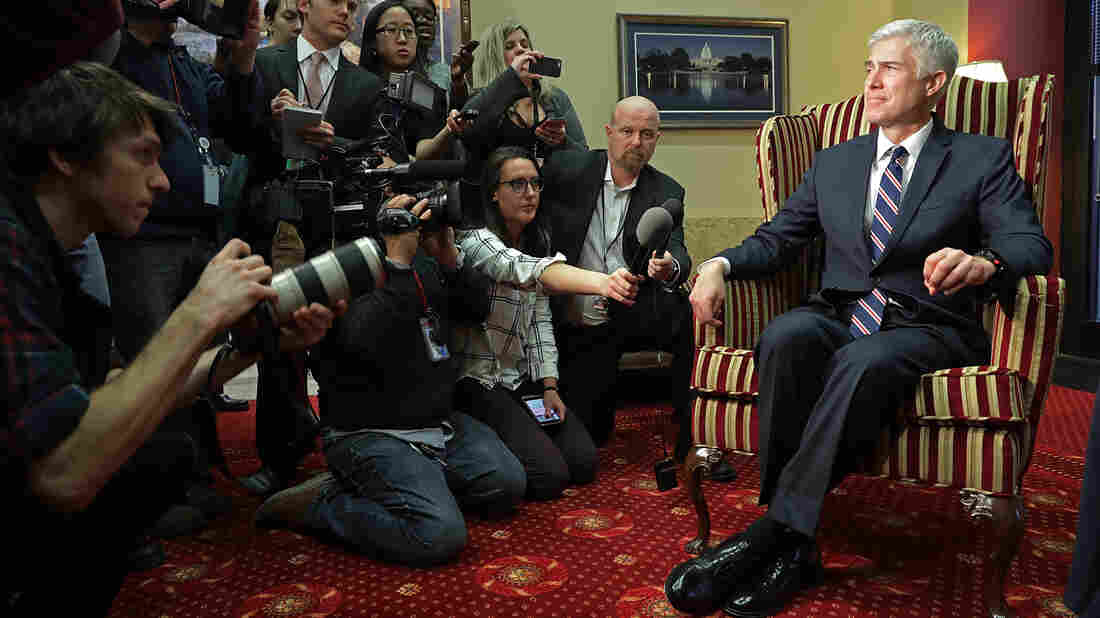 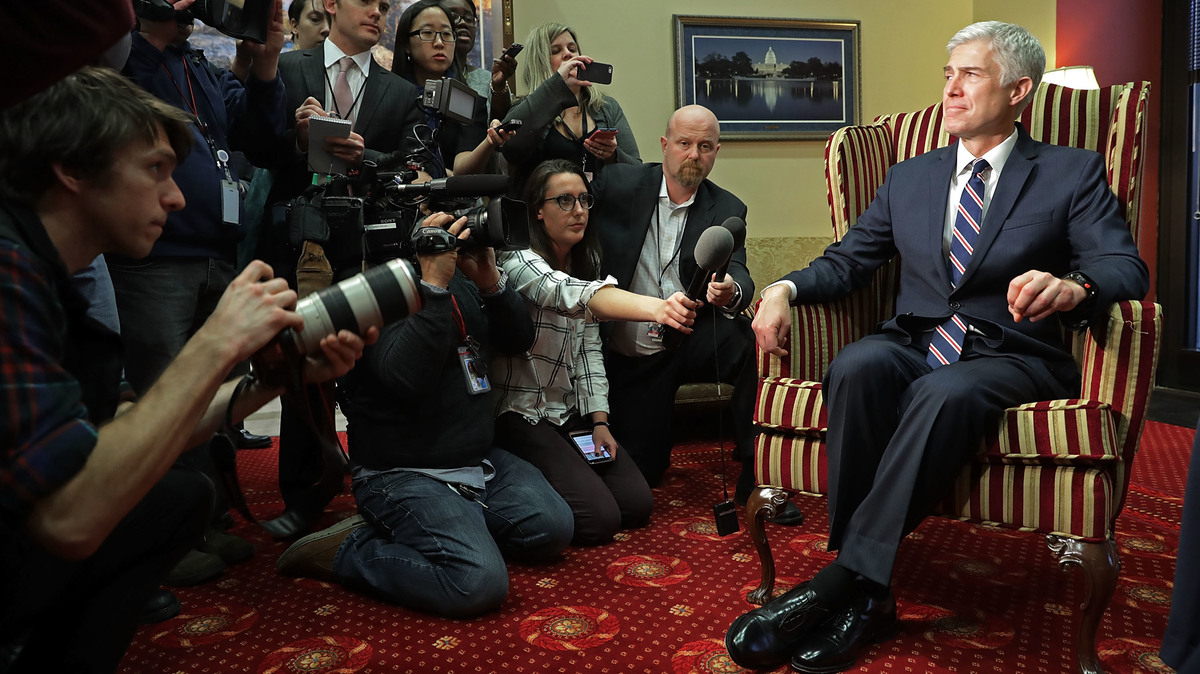 The late Justice Antonin Scalia may not have been the original originalist, but he popularized what had once been a fringe legal doctrine. He argued for it both on and off the U.S. Supreme Court and brought originalism into if not the mainstream then at least into the center of legal debate.

Why Gorsuch's Nomination Is Likely To Play Out As An Angry, Partisan Battle

Judge Neil Gorsuch, who is nominated to fill the Supreme Court vacancy created by Scalia's death, is a self-proclaimed disciple of Scalia's crusade. Indeed, in a recent speech, he recalled how he wept on the ski slopes of Colorado upon learning of Scalia's death.

So what is originalism?

Scalia famously described it this way:

"The Constitution that I interpret and apply is not living but dead, or as I prefer to call it, enduring. It means today not what current society, much less the court, thinks it ought to mean, but what it meant when it was adopted."

What drove the increasing acceptance of originalism on the Supreme Court was Scalia's uncompromising commitment to his personal judicial philosophy and the growth of the conservative Federalist Society in academia, spawning, in turn, more and more advocates of the theory.

Also significantly contributing was the luck of the Supreme Court draw.

From 1980 on, Republican presidents got the chance to fill seven seats on the Supreme Court, and at each rotation, the new justice was more conservative than the person he or she replaced. That, too, reflected the increasing conservative drift of the Republican Party, with evangelicals and other social conservatives gaining more power and influence.

Scalia and other justices have embraced originalism as a way to check what they viewed as the growing and unbounded power of the judiciary. They contended that if policy changes take place, the changes should come through the democratic process rather than through the unelected courts.

At a 2016 lecture at a law school, Gorsuch said the "great project of Justice Scalia's career was to remind us of the differences between judges and legislators":

"To remind us that legislators may appeal to their own moral convictions and to claims about social utility to reshape the law as they think it should be in the future. But that judges should do none of these things in a democratic society. That judges should instead strive (if humanly and so imperfectly) to apply the law as it is, focusing backward, not forward, and looking to text, structure, and history to decide what a reasonable reader at the time of the events in question would have understood the law to be— not to decide cases based on their own moral convictions or the policy consequences they believe might serve society best."

There are no transcripts of the framers' conversations while they drafted the Constitution, so no one knows precisely what they were thinking as they wrote it. There are, however, records of the ratification debates, which originalists rely on to determine intent.

"The modern version of originalism is looking for the original public meaning of the Constitution and isn't looking for subjective framers' views, so the views of the ratifiers, in that case, is more important," said Todd Gaziano, senior fellow in constitutional law at the Pacific Legal Foundation.

Ginsburg: Liberal Justices Make A Point To Speak With One Voice

Critics of originalism contend that its advocates pick and choose when they are willing to defer to the elected branches. They note that originalists have been willing to strike down federal laws adopted by large congressional majorities, invalidating laws and reversing decades of legal precedents governing campaign finance regulations and voting rights, for instance.

The living constitutionalists' take on originalism

Gorsuch has stressed, as have other originalists, that the job of a judge should be to "look backward" at what the Founding Fathers meant at the time they wrote and ratified the Constitution. Onetime constitutional law professor Barack Obama summarized the critique of that theory this way in his book The Audacity of Hope:

"Anyone like Justice Scalia, looking to resolve our modern constitutional dispute through strict construction, has one big problem: The founders themselves disagreed profoundly, vehemently, on the meaning of their masterpiece. Before the ink on the constitutional parchment was dry, arguments had erupted not just about minor provisions, but about first principles; not just between peripheral figures, but within the revolution's very core."

Same-Sex Marriage, In The Justices' Words

Those critical of originalism argue that a static interpretation of the law lags behind society's progress.

Justice Ruth Bader Ginsburg, currently the Supreme Court's leading liberal voice, embraces the idea of a "living Constitution," a notion disdained by originalists as too flexible.

"As I see it, it isn't the Supreme Court that is deciding for the whole society, like an imperial ruler," she said at an event in February 2014. Speaking of the Equal Protection Clause of the 14th Amendment, she said, "there hasn't been any major change in which there wasn't a groundswell among the people before the Supreme Court put its stamp of approval on the inclusion in the equality concept of people who were once left out.

"It was a huge embarrassment that racism persisted in our country, that our troops in World War II until the very end were separated. I think that World War II made inevitable the change with respect to the status of racial minorities. And it was the same way with women's increasing demand to count as full citizens."

Sparring on the Supreme Court over constitutional interpretation

Some of the most discussed and controversial Supreme Court decisions come down to the justices' disagreements as to whether the Constitution should be viewed as a "dead" or "enduring" document, as Scalia called it, or a "living" one.

Those disagreements were never more apparent than in a series of decisions about gay rights written by the usually conservative Justice Anthony Kennedy, who is often dubbed the swing vote on the Supreme Court because he sometimes votes with the court's liberals. In a decision striking down a Texas law that criminalized private, consensual "homosexual conduct," Kennedy asserted that the Founding Fathers did not specify all liberties because they expected that list to change.

"They knew times can blind us to certain truths, and later generations can see that laws once thought necessary and proper in fact serve only to oppress," Kennedy said while summarizing his opinion from the bench.

"It is the promise of the Constitution that there is a realm of personal liberty which the government may not enter," he said.

Roberts: 'Celebrate Today's Decision ... But Do Not Celebrate The Constitution'

Scalia dissented, declaring, "It is clear from this that the Court has taken sides in the culture war, and in particular, in that battle of the culture war that concerns whether there should be any moral opprobrium attached to homosexual conduct."

"The dynamic of our constitutional system is that individuals need not await legislative action before asserting a fundamental right," Kennedy said from the bench in announcing the 2015 same-sex-marriage opinion.

In his dissent, Scalia included a scathing footnote on Kennedy's opinion.

"If, even as the price to be paid for a fifth vote, I ever joined an opinion for the Court that began: 'The Constitution promises liberty to all within its reach, a liberty that includes certain specific rights that allow persons, within a lawful realm, to define and express their identity,' I would hide my head in a bag."

"But allowing unelected judges to strike down democratically enacted laws based on rights that are not actually written in the Constitution raises obvious concerns about the judicial role," he said. Leave it to the democratic process, said Roberts.