Accessibility links
3 Things To Consider About The Politics Of Trump's Immigration Executive Order The White House is confident that Trump is on the right side of the visa and travel ban. Here's why. 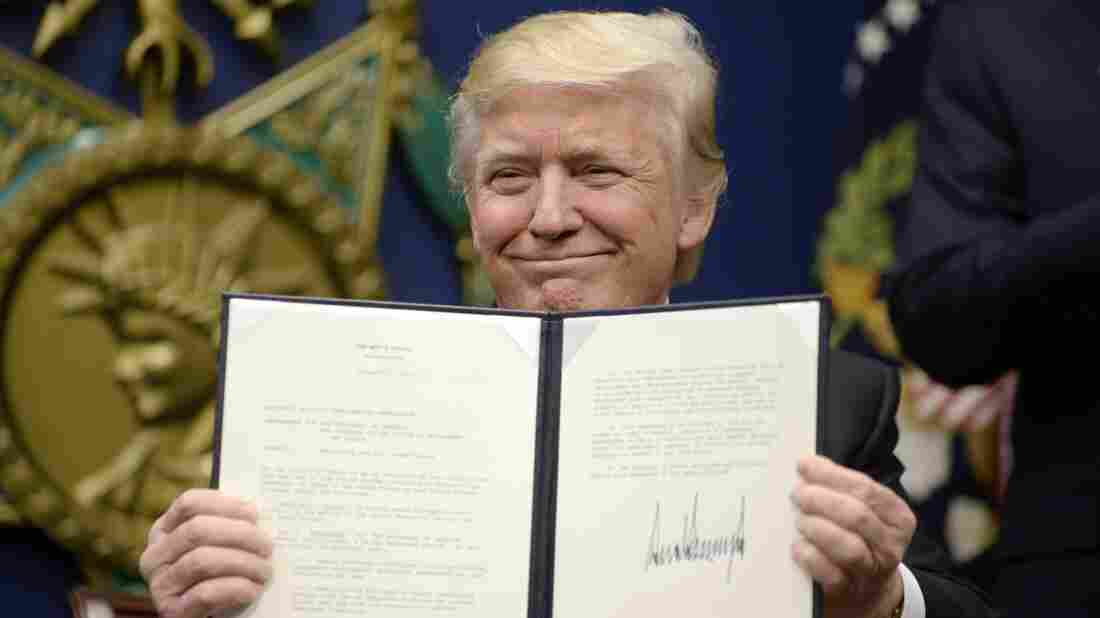 President Trump signs two executive orders at the Department of Defenseon Friday — calling for the "great rebuilding" of the military and for "extreme vetting" of visa seekers from seven countries. Pool/Getty Images hide caption 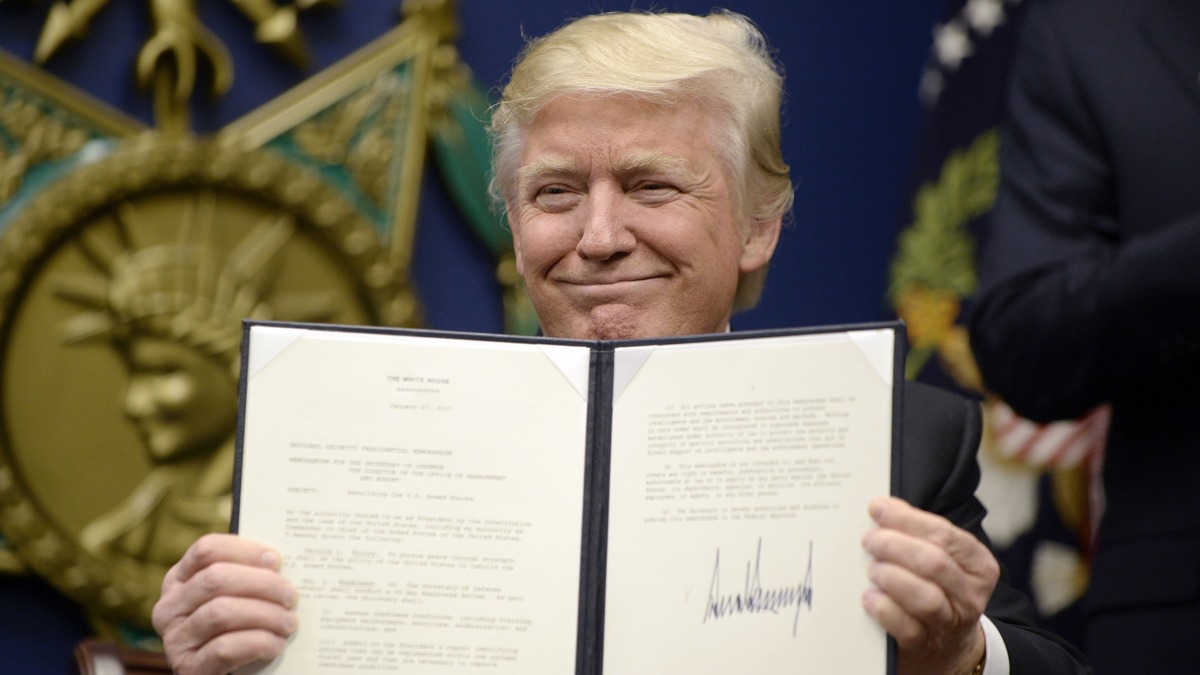 President Trump signs two executive orders at the Department of Defenseon Friday — calling for the "great rebuilding" of the military and for "extreme vetting" of visa seekers from seven countries.

The White House moved up the president's announcement that he was nominating Neil Gorsuch to the Supreme Court by two days, possibly to distract from the firestorm of criticism over his chaotic rollout of his refugee policy.

But maybe the White House didn't have to worry.

New polls show the policy may not be as unpopular as all those protests over the weekend suggested.

Here are three things to consider when it comes to the politics surrounding the president's executive order:

1. What little polling there is seems to confirm the White House's confidence

At the White House on Wednesday, press secretary Sean Spicer was happy to point to polls that showed support for the president's order. Spicer singled out a Rasmussen poll showing 57 percent of Americans favored a "temporary ban on refugees from Syria."

Rasmusssen is hardly considered a reliable and well-conducted poll. But Spicer also pointed to a Reuters poll, conducted with more traditional methods by Ipsos, which showed 66 percent of Americans agreeing with the statement "the U.S. should limit refugees" (which it already does).

Those numbers sound like solid support for the administration's position. After all, securing the border and protecting citizens from the threat of terrorism is what most Americans expect from their government but ...

2. There's lots more in those polls

Dig deeper into that Reuters poll, and you'll see something else:

When you ask people if they agree or disagree with "Trump's order," 49 percent agree, 41 percent oppose.

That's good for the White House. But when Reuters asked should the U.S. show a preference for Christian refugees (as the president has suggested), 56 percent say no.

And, in perhaps the most important finding, the country is — no surprise — very divided by party over this order:

So once again, Trump has jumped both-feet-first into an issue that has deep partisan divides. This approach worked for him during the campaign, but it's not clear if it is a good governing strategy. 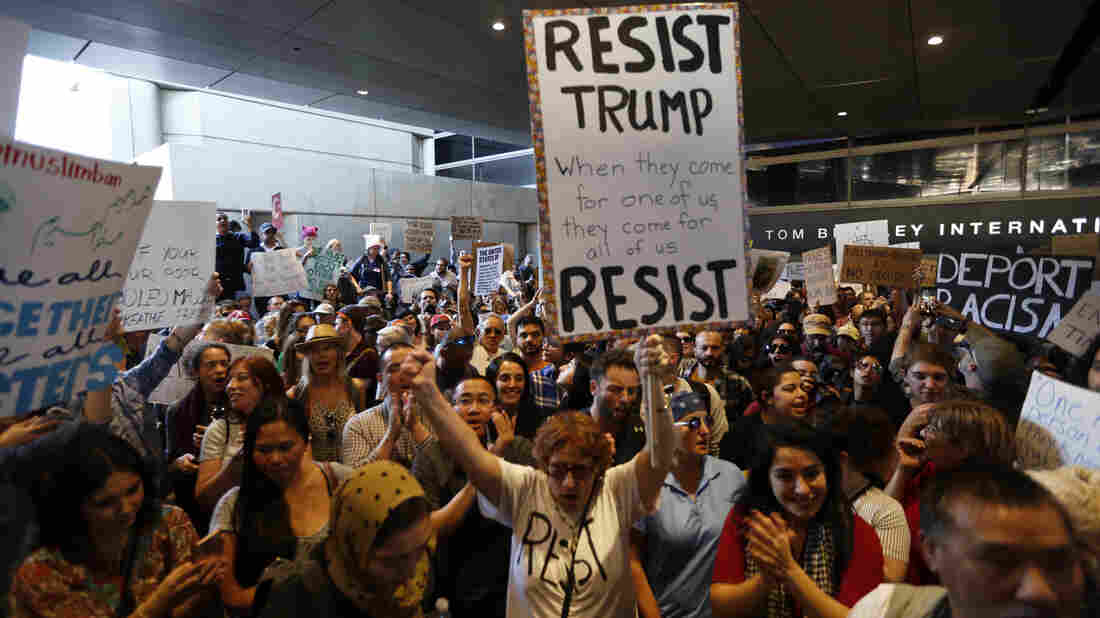 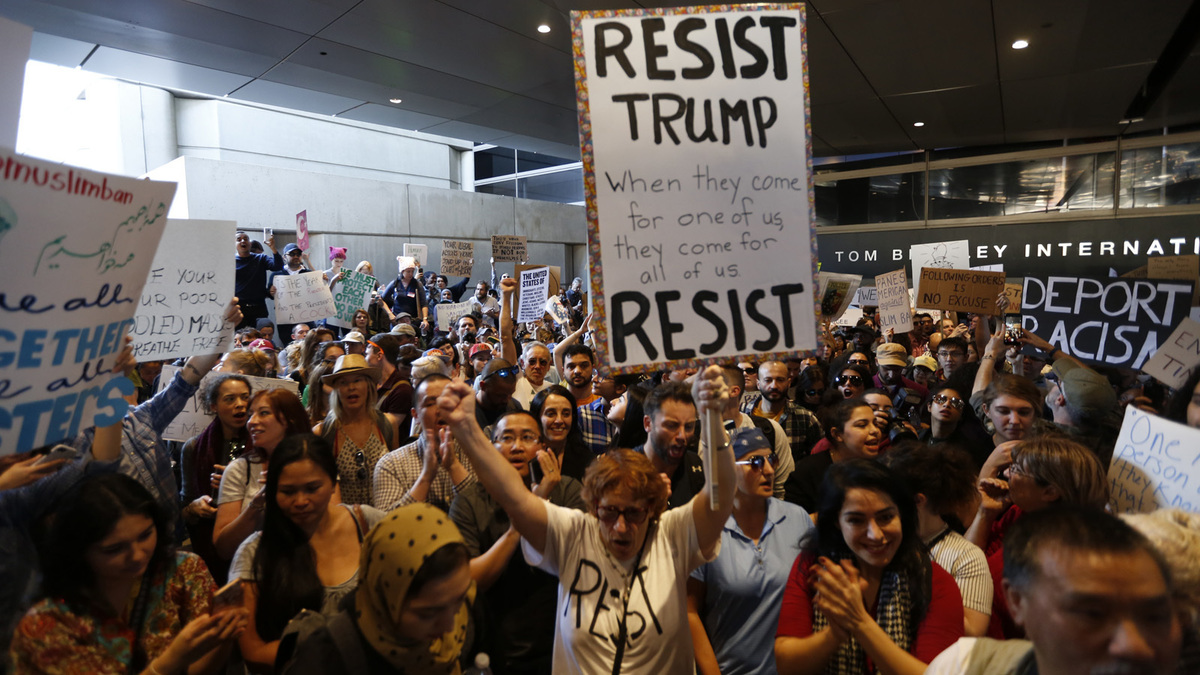 Although a few Republican senators, like John McCain of Arizona and Lindsey Graham of South Carolina, agreed with national security experts who criticized the order for being wrongheaded and likely to backfire by making terrorist attacks more likely, most Republicans were either supportive or confined their criticism to the sloppy, confusing way the order was developed and implemented.

Democrats, on the other hand, were uniformly appalled. They attacked the order for employing what they said was an unconstitutional religious test and for undermining democratic values of openness, tolerance and inclusion.

And in a development that might be even more important than the support for the policy in the polls, there was intense and widespread public resistance to the ban.

The liberal base reacted with fury. Tens of thousands of people protested at airports around the county. There was also a lot of deep resistance in Washington, too. Sally Yates, the acting attorney general, refused to defend the order, which bans people from seven Muslim-majority country, in court. She determined it was a Muslim ban. She was fired.

Trump Gets His Man At The State Department

More than 900 State Department employees signed a "dissent cable." (Dissent cables have a long tradition at the State Department. There's even an award for it.) But the dissent prompted Spicer to say, "They should either get with the program, or they can go."

The order also seems to have further soured America's relationship with its allies. Just days after British Prime Minister Theresa May stood in the East Room with Trump, she and other European leaders blasted his plan. May called it "divisive and wrong." And Wednesday night, the Washington Post reported on a tense phone call between Trump and the Australian prime minister over the ban.

During the campaign, Trump's call for a Muslim ban was one of his most controversial promises. And now that he's enacting it, it's not any less divisive.

Trump seems to be doubling down on division. He mocked and belittled Senate Minority Leader Chuck Schumer — whom he had already called a clown — for crying "fake tears" when Schumer choked up at an event protesting the order.

"I want to know who his acting coach was," Trump sneered at an unrelated event.

At the time, Schumer was surrounded by distraught constituents from a diverse set of ethnicities, races and religions.

Again, this kind of withering, bullying, verbal assault worked for Trump during the campaign. Will the fake-tears-of-a-clown attack help Trump govern? After all, there are many things on Trump's agenda that will need 60 votes to pass the Senate — and Schumer will have to provide some of them from Democratic ranks if Trump is to succeed.

But the weekend's events have made that harder. Trump's executive order on immigration has engaged and enraged the liberal base, ensuring that Democrats in Congress will be under tremendous pressure not to cooperate with Trump on anything.

The political lesson Trump appears to have learned is that division works; there's no need to adjust and it's not necessary to reach out beyond the 46 percent of voters that brought him — stunningly and improbably — to the White House.