Accessibility links
In Atlanta, Small Businesses Have Mixed Expectations Of President Trump Members of Atlanta's Hispanic community fear the effect of Trump's recent immigration orders on business, while other business leaders welcome the president's promise to roll back regulations. 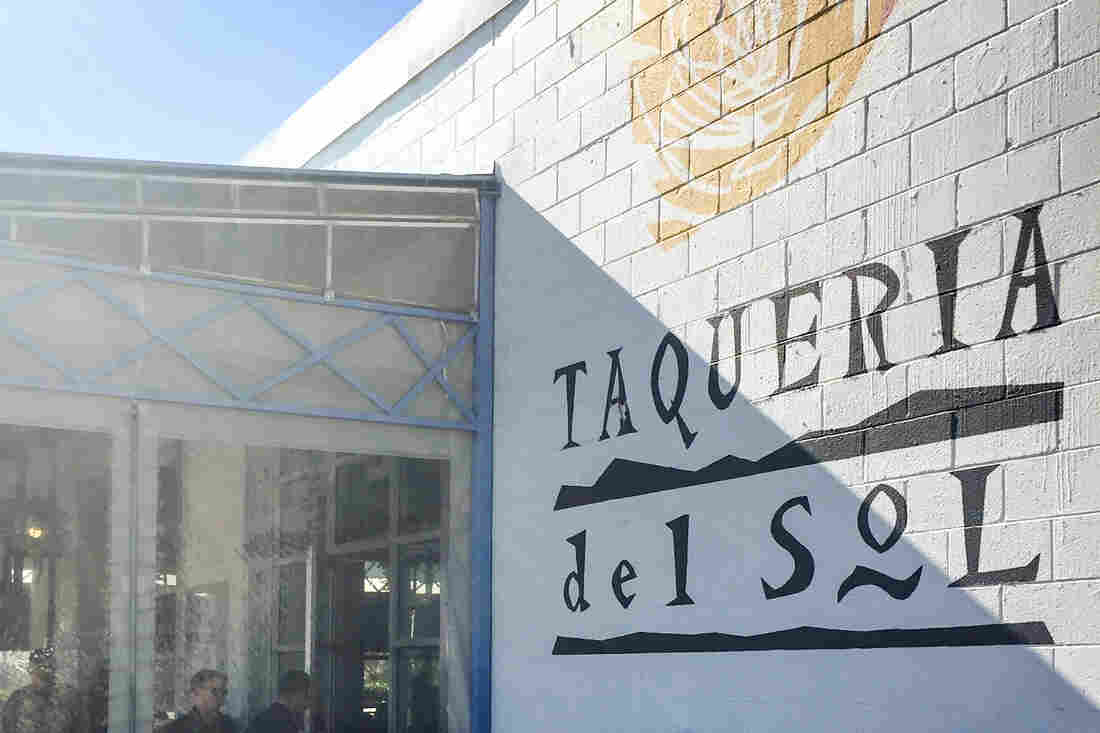 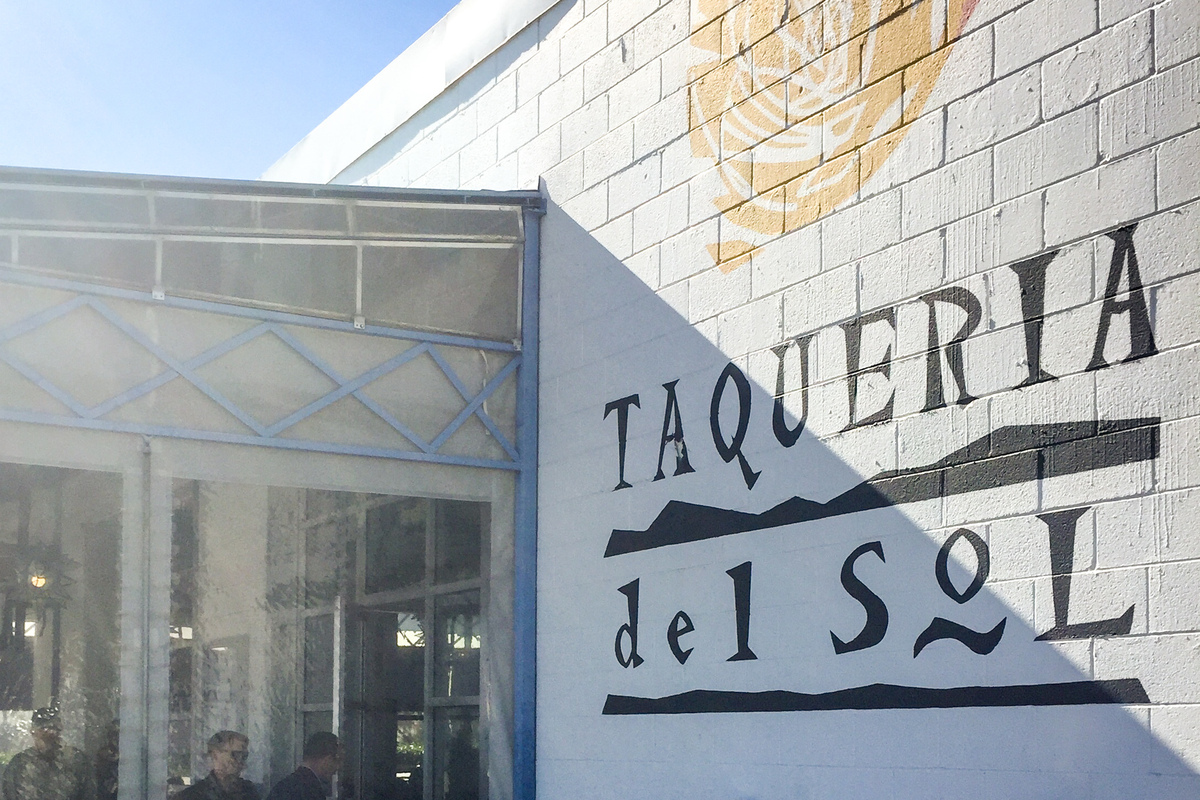 Taqueria del Sol on Atlanta's west side serves a blend of Mexican and Deep South flavors, like barbecue tacos.

At lunch hour, the line stretches out the door at Taqueria del Sol on Atlanta's west side. Inside, the tiny kitchen is a swirl of activity.

"This is my crew," says co-owner and chef Eddie Hernandez. "They're all from Mexico."

The menu is a hybrid of cuisine from his native Monterrey, Mexico, and down-home Southern cooking, like tangy turnip greens seasoned with red chilies and re-fried black-eyed peas.

"The food can get us together," Hernandez says, "and make us think differently about each other."

Hernandez and his partner, Mike Klank, have been running restaurants together since 1987. They've seen presidents come and go.

Klank says there should be a better system for businesses to sponsor immigrants, not more obstacles. The partners describe themselves as conservative economically, but liberal socially. They're doubtful this administration will bridge those views.

"Every four years we go through the same thing," Hernandez says. "A lot of promises and nothing gets done."

Atlanta is a majority Democratic city in Republican Georgia, and it has long fashioned itself the cosmopolitan business capital of the southeast. It is home to major corporations like Delta and Coca-Cola, but it is also a center for small business. The city ranks second behind New York among cities with the most African-American owned companies.

And since 2000, metro Atlanta's Hispanic population has more than doubled. Latino businesses line the busy Buford Highway — a main artery that stretches from Atlanta to the suburbs.

Eduardo Fernandez is ordering lunch at the food court at Plaza Fiesta, an indoor marketplace that caters to Hispanic shoppers.

"They call it El rinconcito de nuestro pueblo," he says. "A little corner of our little town."

Fernandez is an advertising and marketing consultant, and has an online bilingual rock radio station.

Sitting near the kids' carnival area in the mall, Fernandez says he is concerned by some of the executive orders Trump has signed.

"I'm worried about his orders and ideas, and things that he's implementing," Fernandez says. "His attitude."

Fernandez was born in Laredo, Texas, but spent his childhood freely crossing the border to be with family in Mexico. He says Trump is moving recklessly, harming long-standing relations between the two countries.

Fernandez is particularly alarmed by what he perceives as an effort to single out certain groups.

Fernandez has watched the turmoil over the executive order limiting visitors from seven mostly Muslim countries. He says he doesn't think Trump thought through the implications of making good on his campaign promises at such a frenetic pace. 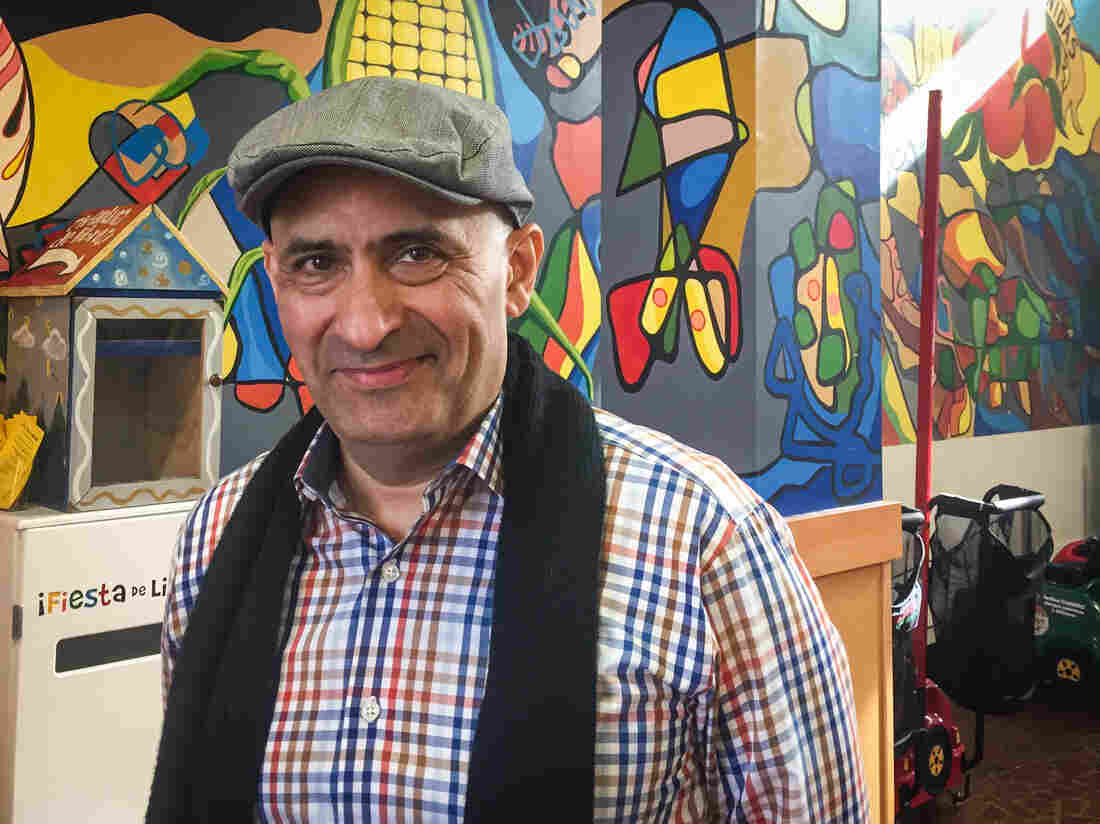 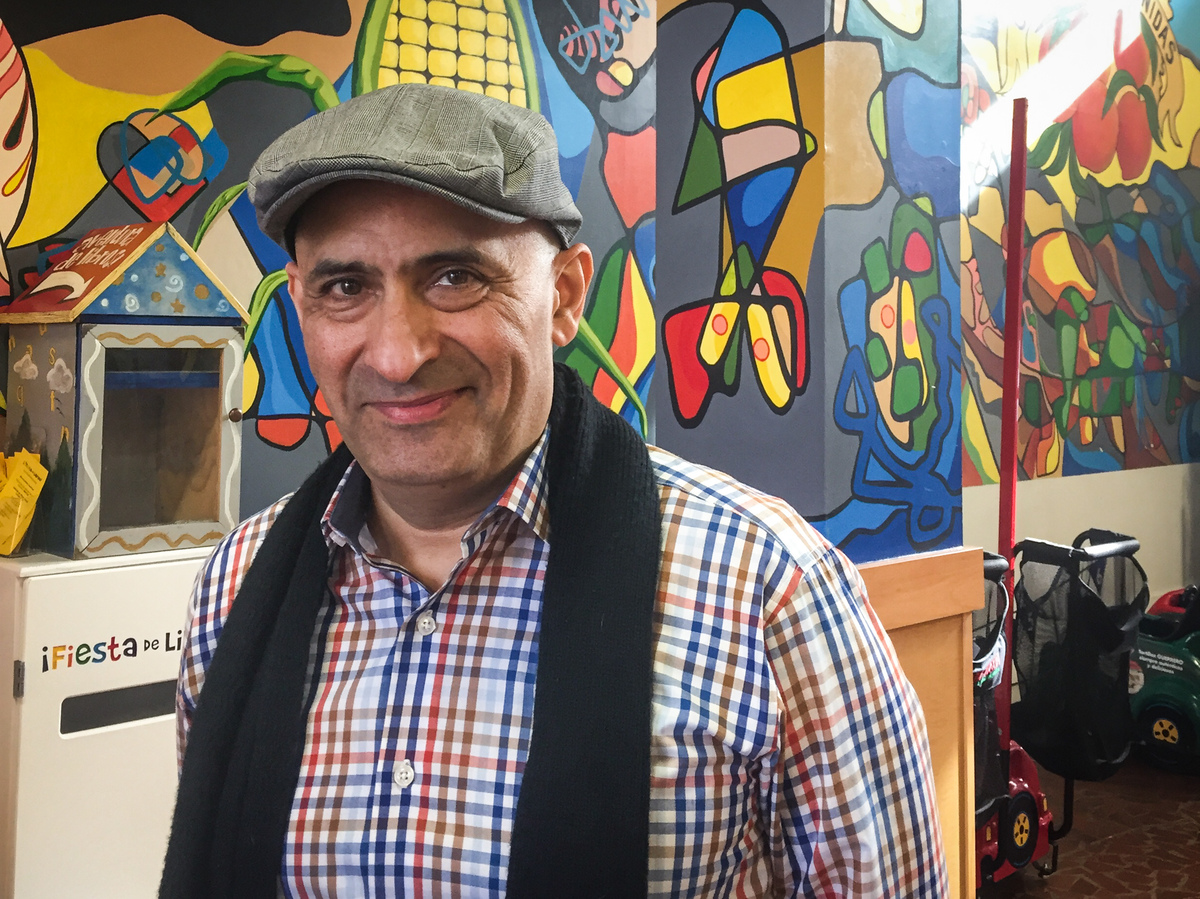 "I will give him that," Fernandez says. "He's doing what he promised."

Fernandez says he's unsure what the new administration will mean for his business, so for the short term he won't be looking to expand.

But some small businesses are banking on Trump's policies to help them.

Michael Flock is the founder and CEO of Flock Specialty Finance, an eight-person company in the sub-prime, higher-risk lending market. He's optimistic Trump will curtail what he calls onerous regulations imposed during the Obama administration.

"We needed some regulation because in this industry of debt collection there are a bunch of cowboys, and we needed some new rules," Flock says. "But in America, sometimes we go too far."

He says middle market firms like his have been squeezed, so he welcomes Trump's promise to roll back the red tape and cut taxes.

"I wasn't for him initially," Flock says. "I'm a middle-of-the-road Republican."

Flock's high-rise office on the perimeter of Atlanta is lined with portraits of Thomas Jefferson, Winston Churchill and Teddy Roosevelt, a Republican reformer. That's how Flock sees President Trump.

"I think he's a radical reformer," he says. "I think we need major change. And I think it takes somebody outside the government to do that."

Flock says Trump has potential "if he can stay focused." He worries Trump's apparent vanity and penchant for tweeting could prove to be unnecessary distractions.

It's already a distraction for one young entrepreneur.

"I'm pretty much just embarrassed to have him as my president," says Latasha Kinnard, CEO of Start Young Financial Group. "I don't reject him but having him has me be embarrassed." 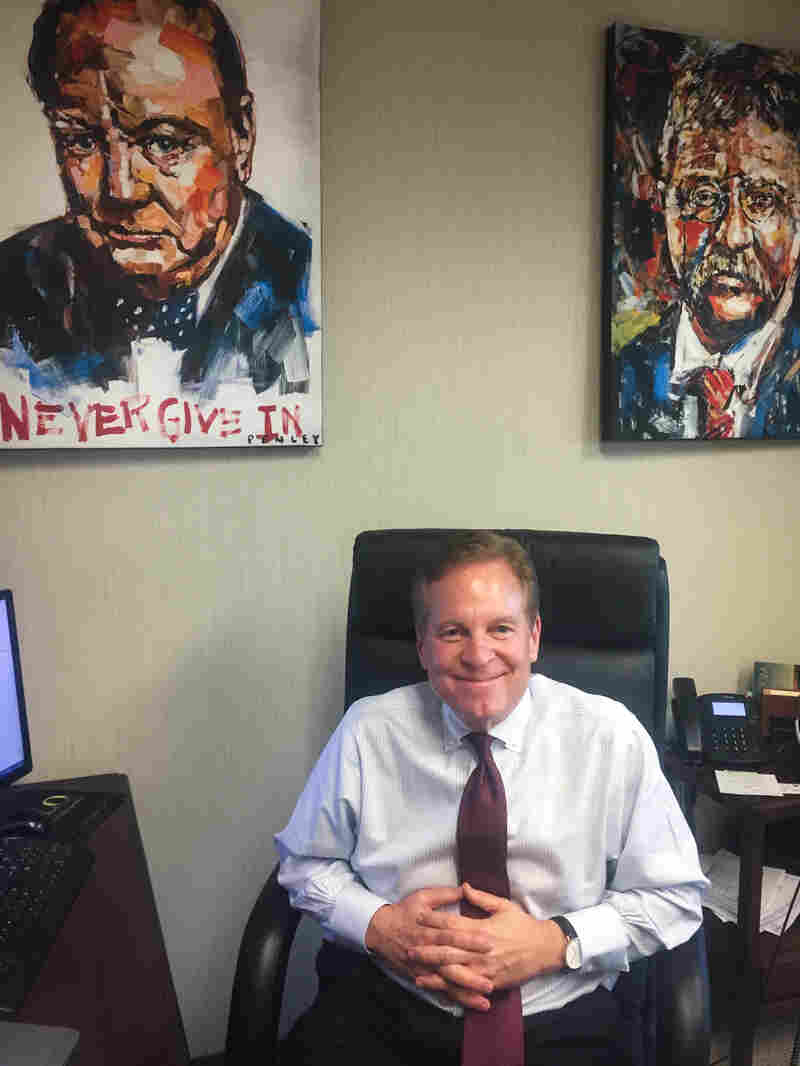 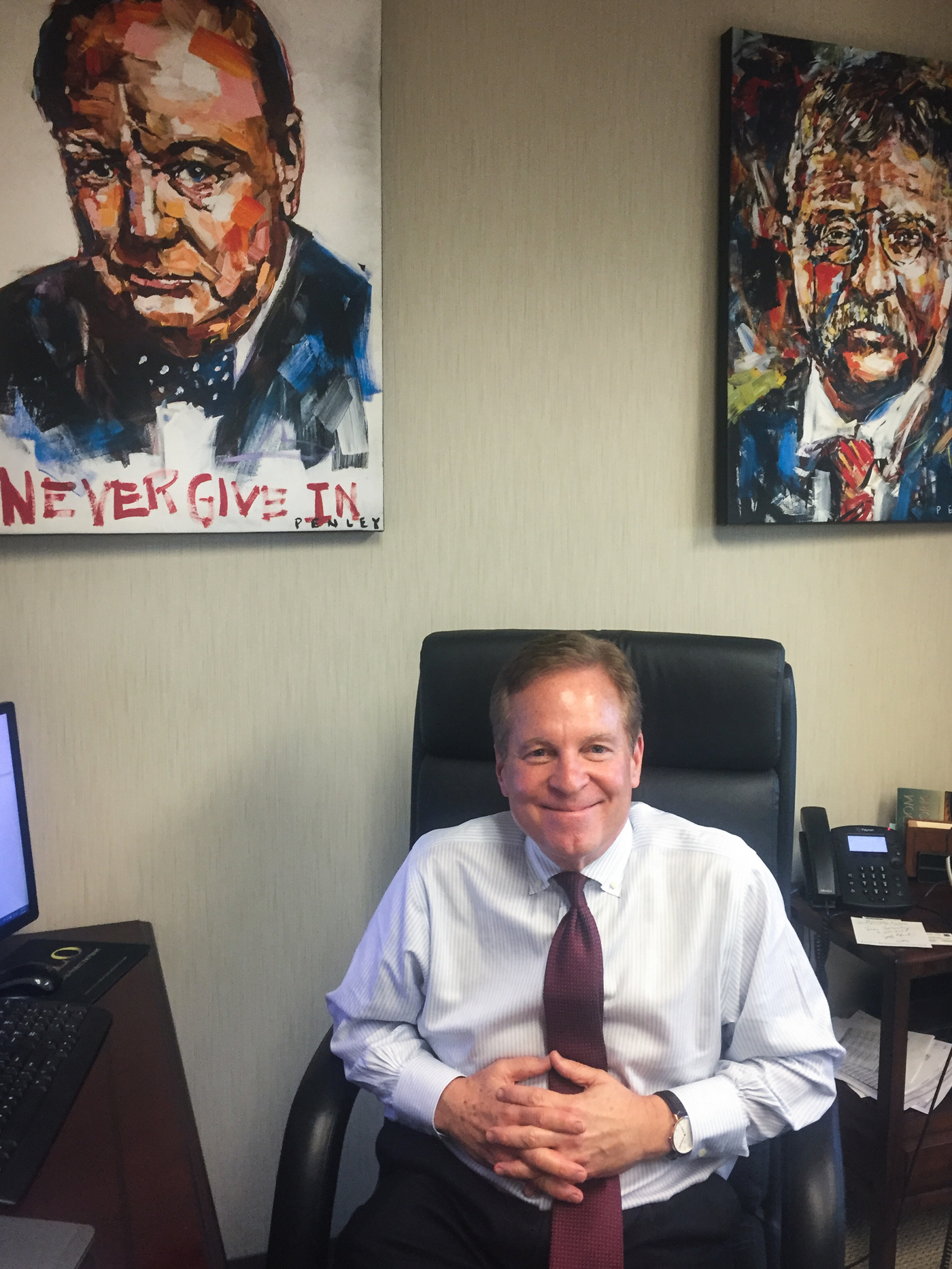 Flock Specialty Finance founder and CEO Michael Flock's desk is flanked by portraits of Winston Churchill and Teddy Roosevelt. He thinks President Trump can be a Republican reformer like Roosevelt.

Kinnard says she used to work in finance for a large corporation, but now has her own business that encourages young black professionals to build wealth.

"I grew up on the south side of Chicago," she says. "Seeing people struggle with money was something that was just built into my life, and I wanted to tackle that."

Kinnard says she often votes Democratic, but she doesn't think either political party serves her interests. Her expectations for the Trump administration are pretty low.

"There is a lot of fear," Kinnard says. "Not just nervousness or anxiety, but just flat out fear that Donald Trump isn't fit to run the country simply because of a lack of empathy for the people who make up this country."

She checks off a litany of worries — health care, immigration, the idea that alternative facts have a place in political discourse.

But Kinnard says she believes Trump's presidency can serve as a wake-up call for people to take their civic duties seriously when they see just what's at stake.