Accessibility links
Book Review: 'Binti: Home,' By Nnedi Okorafor Nnedi Okorafor's Binti: Home is the second installment in her series following a young woman with grand interstellar dreams, who now must reconcile her university experiences with her home culture. 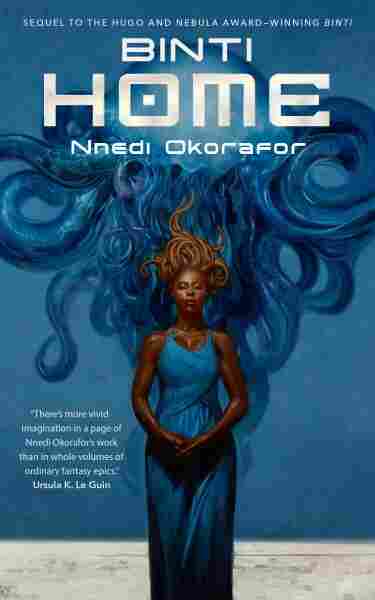 In 2015, Nnedi Okorafor's wildly successful Binti helped launch Tor.com's novella-publishing imprint before winning both the Hugo and Nebula awards the following year. A shape-shifting story of adventure, trauma, transformation and communication, Binti followed its namesake heroine from her Himba roots on Earth to faraway Oomza University, where hundreds of different peoples from across the galaxy go to study. In Binti: Home, Okorafor sends her heroine back to Earth on a quest to reconcile the new, conflicting parts of herself with her roots.

A year after her cataclysmic arrival at Oomza University, Binti finds herself struggling to make friends or focus on her studies. Her attempts at understanding her edan, the ancient artifact that saved her life and allowed her to communicate with the jellyfish-like aliens called the Meduse, are often stymied by violent mood swings she can't control or understand. She feels powerfully the need to return home and undergo the pilgrimage customary for young women of her tribe, and Okwu, her agender Meduse captor-turned-friend, offers to accompany her as ambassador to humanity — the first Meduse to set tentacle on Earth.

I was impressed with and admired Binti, but Home is more ambitious, complicating some of the received information in the first book and addressing some of its gaps. We see Binti dealing with the aftermath of her trauma; we see that the Himba people's marginalization and oppression does not make them immune to prejudices of their own; and we see Binti's painful, complicated relationship with her family, who feel both proud of her accomplishments and betrayed by her leaving. In what I'm beginning to think of as Okorafor's trademark flouting of conventional genre structures, Home is the coming-of-age story Binti seemed to promise before bait-and-switching into an intense thriller. Home sees Binti returning to her people changed by necessity — but also leaving them again to change by choice. Where Binti flung its main character into outer space, Home has her delving deep into the desert that's been her home, into her family history and the secrets buried beneath her skin.

Okorafor's writing is even more beautiful than I remember it being in Binti, evocative and sharply elegant in its economy. Occasionally, I was startled by a character's motivations, or unconvinced by a set of reactions that seemed more plot-necessary than naturally developed, but these were minor exceptions to a general rule of deep enjoyment. Home equals or surpasses Binti in all ways except its ending: a sheer cliffhanger that left me grumbling about having to wait for the concluding novella.

It's difficult to write this review in the midst of everything that's happening: difficult to write of a future in which people of color move unfettered through the stars, befriend aliens, make peace between warring factions. Right now, the fantasy in the Binti novellas, the fiction, isn't the jellyfish-aliens, the magical math or strange artifacts, but the ease with which travel is allowed black and brown people between planets, nations, lives. As futuristic as these books are, every passing day makes them feel farther away. But I cling all the same to what they believe in: love between family members who want different things of each other and the world; communication winning out between warring parties; change enabling friendship and discovery. What Home says, ultimately, is that travelling the galaxy is relatively easy compared to understanding ourselves and each other — and that this is crucial, necessary work.