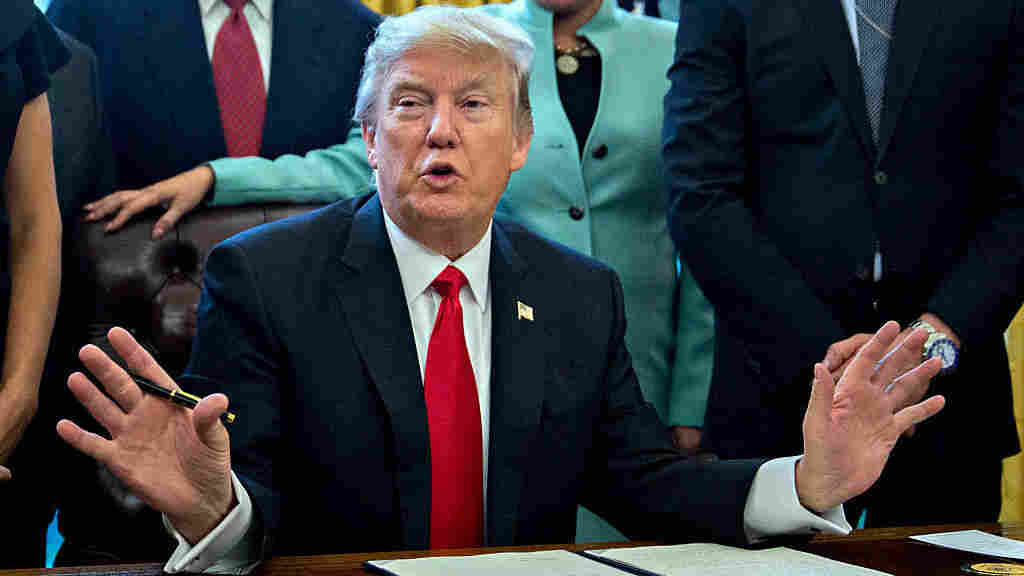 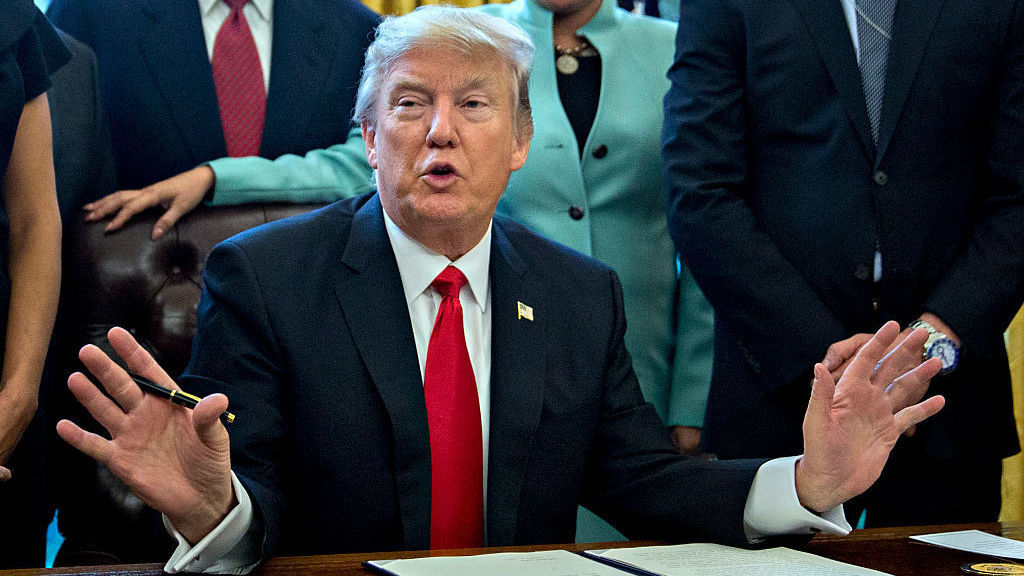 President Trump, surrounded by small-business leaders, speaks before signing an executive order in the Oval Office earlier this week.

President Trump's first two weeks in office have been a sprint, not the start of a marathon. If the rapid pace and, sometimes, hourly developments of executive orders, news, controversies and more have left you exhausted, you're not alone. If you're finding it hard to remember just everything that's transpired too, we're here for that as well.

Here's a quick recap of the highlights — and lowlights — of the first 14 days of Trump's nascent presidency.

On his first full day as president, Trump went to the CIA to try to mend fences with the intelligence agency he repeatedly maligned during the campaign and the transition. (He blamed the media for creating the feud, but his own tweets disprove that.) While standing before a memorial at the agency, he argued over the crowd size at his inauguration, making false assertions that run counter to aerial photos of the event and NPR's own reporters on the ground. He also claimed it stopped raining during his inaugural address, when it did not.

Hours later, new press secretary Sean Spicer made his first appearance in the White House briefing room to double down on those falsehoods about crowd size. He cited wrong numbers for Metro usage in D.C. and also falsely said that floor coverings used for the first time on the National Mall made photos show where there were gaps, when in fact such coverings had been used before. After delivering his fiery broadside, Spicer left without taking any questions.

While all that was happening, the Women's March on Washington protesting Trump and his policies toward women drew thousands and thousands of people — and the second-highest Metro ridership day ever, second only to President Obama's first inauguration. Protests weren't just limited to D.C., though — similar events happened across the country that also drew massive crowds. And the protests even went worldwide, happening on all seven continents.

The White House should have been in cleanup mode after Saturday's first rocky day in office, but instead on the Sunday shows spokespersons doubled down on false claims about crowd size and more. Trump counselor Kellyanne Conway argued on NBC's Meet the Press that Spicer had simply provided "alternative facts" when making his arguments — a moniker that looks primed to persist throughout the Trump administration.

The biggest news happened when Trump met that evening with both Republican and Democratic congressional leaders, reviving his unfounded claims that there were between 3 million and 5 million illegal votes cast in the 2016 election that caused him to lose the popular vote to Democrat Hillary Clinton. This would continue to be an issue for the rest of the week (more on this below).

Trump also signed an executive order reinstating the "Mexico City" policy, a global gag rule prohibiting international nongovernmental organizations that provide or talk about abortion services from receiving federal funding. He also signaled his intent to withdraw from the Trans-Pacific Partnership trade agreement and instituted a federal hiring freeze except for the military.

Spicer had his second outing with the press, still in a largely defensive crouch. He blamed the press for trying to "undercut the tremendous support" for Trump and doubled down on his insistence that Trump's was the most-watched inauguration ever, though given difficulty in counting streaming numbers, that's hard to back up.

Spicer repeated Trump's unfounded assertions that there was widespread voter fraud during the U.S. elections but provided no further proof of why the president believed that.

Trump approved construction of the Keystone XL and Dakota Access pipelines, which had both been stopped during the Obama administration amid outcry from environmental groups. Other executive orders directed the Commerce Department to review how federal regulations might be impeding U.S. manufacturers.

Trump signed two executive orders keeping one of his top campaign promises, ordering the U.S. government to begin construction of a wall along the Southern border with Mexico. He asserted that while the U.S. government would have to front the money, Mexico would pay it back. (Mexican leaders have said they will not.) Trump also directed the Homeland Security and Justice departments to withhold federal funds from sanctuary cities.

Studies Trump cited offer no proof of such voter fraud. And he also incorrectly claimed it was illegal to be registered in two states; it's not illegal unless someone votes in two states, because often voter rolls are not quickly updated. In fact, it turned out some Trump aides and family members were registered in multiple states.

Trump traveled to Philadelphia to address the GOP congressional retreat, where he delivered a relatively on-message speech promising Obamacare repeal and to crack down on violent crime, and touting his executive actions on immigration and trade.

Mexican President Enrique Peña Nieto canceled a planned trip to the U.S. amid Trump's continued assertion that his country would repay the U.S. for the border wall. One possibility to recoup the investment from Mexico that the White House floated was a 20 percent import tax, which, as NPR's Scott Horsley reported, "would effectively saddle U.S. consumers with a significant portion of the wall's cost, estimated at $15 billion or more."

Trump gave his second interview, to a friendly source, Fox News' Sean Hannity. He again boasted of his crowd sizes during his inauguration and talked about the (still unproven) allegations that there were millions of illegal votes cast in November.

He also told Hannity he continues to believe waterboarding works and talked about bringing it back, though it is outlawed in the U.S. as torture. His new defense secretary, retired Gen. James Mattis, has said he does not believe waterboarding is effective and has reiterated it is illegal, as have top GOP congressional leaders such as Speaker Paul Ryan.

Trump signed an executive order blocking travelers from seven countries, all of which are Muslim-majority — Iraq, Iran, Syria, Yemen, Sudan, Libya and Somalia — from entering the U.S. for 90 days. New refugee admissions are suspended for 120 days, while Syrian refugees are banned indefinitely. There was confusion at airports whether or not the ban includes those with valid U.S. visas, green cards or people from those countries who are permanent residents. Protests began at airports as travelers were detained.

Trump hosted his first foreign leader at the White House — British Prime Minister Theresa May. She pushed for a future trade deal with the U.S. The two held a joint news conference, where May said Trump had reaffirmed his support for NATO — though he has questioned whether the U.S. should be in the alliance in the past.

The annual anti-abortion event called by its proponents the March for Life drew thousands more demonstrators to the National Mall. Vice President Pence and Conway both spoke.

Protests continued at airports across the country amid confusion over Trump's travel ban. Immigration attorneys began offering their services pro bono. Late on Saturday, a federal judge issued a stay on the deportations of valid visa holders after they have landed in the U.S. in response to an ACLU lawsuit.

Trump reshuffled the National Security Council, elevating controversial chief strategist Steve Bannon to be a permanent member of the Principals Committee, giving him equal billing with other Cabinet-level officials. The director of national intelligence and the chairman of the Joint Chiefs of Staff, who are typically permanent members, will now only attend when pertinent issues are being discussed.

Trump called several foreign leaders, including Russian President Vladimir Putin. He also had a tense call with Australian Prime Minister Malcolm Turnbull, though details would not be reported until later in the week. The president told Turnbull it was "the worst call by far" that he (Trump) had had that day, and the two clashed on the Obama administration's deal to accept refugees from the country.

Trump signed several executive orders — an ethics order banning administration appointees from ever lobbying foreign governments and from federal lobbying for five years after they leave office. He also directed the administration to develop a "comprehensive plan to defeat ISIS."

A U.S. Navy SEAL was killed during a raid in Yemen targeting al-Qaida militants, the first military casualty of Trump's administration. Later in the week, questions were raised over how the operation — which also is believed to have killed several civilians — was carried out.

Protests continued at airports over the Trump administration's travel ban.

Acting Attorney General Sally Yates (a holdover from the Obama administration) announced she would direct Justice Department lawyers not to defend Trump's travel ban. Hours later, the president fired her, naming Dana Boente, the top federal prosecutor in suburban Virginia, as the interim attorney general until nominee Jeff Sessions is confirmed by the Senate.

More Republicans continued to speak out against Trump's travel ban, voicing concern over its implementation. Former President Barack Obama broke his silence since leaving office, saying through a spokesman that "American values are at stake."

Trump signed an executive order that says for every regulation the executive branch proposes, two others must be repealed.

Trump nominated federal appeals court Judge Neil Gorsuch to fill the Supreme Court seat of the late Justice Antonin Scalia. The evening ceremony in the White House's East Room was arranged for suspense, which gave it the aura of a reality TV show in some ways. Conservatives praised his pick, which was a major campaign issue after Senate Republicans refused to take up former President Obama's nominee, Judge Merrick Garland, for much of 2016.

National Security Adviser Michael Flynn made a surprise appearance at the daily press briefing to announce that the Trump administration was putting Iran "on notice" after the country conducted a ballistic missile test.

Trump and daughter Ivanka traveled to Dover Air Force Base for the return to the U.S. of the remains of Navy SEAL William "Ryan" Owens, who was killed over the weekend in the Yemen raid.

The AP reported that during a call with Mexican President Nieto last week, Trump threatened to send in the U.S. military to stop the "bad hombres down there." Mexico denied the remarks.

Celebrity Apprentice creator Mark Burnett introduced Trump at the annual National Prayer Breakfast. During his remarks, Trump called out the low ratings of the NBC reality show he once hosted and criticized the new host, action star and former California Gov. Arnold Schwarzenegger. "And I want to just pray for Arnold, if we can, for those ratings, OK," the president said.

Trump also pledged at the breakfast to repeal the Johnson Amendment, which prohibits tax-exempt groups, including religious ones, from wading into politics.

A federal judge in Seattle temporarily halted Trump's executive order on immigration and travel from some Muslim-majority countries. The order is effective nationwide.

New sanctions were announced against Iran, following up on the administration's earlier threat against the country.

Trump signed two executive orders directing the review of the Dodd-Frank financial regulations and halting implementation of another federal rule that mandates financial advisers to act in the best interests of their clients.

Airlines resumed allowing travelers once affected by Trump's travel ban to come to the U.S.

Trump, who was at his Mar-a-Lago resort in Palm Beach, Fla., for the weekend, tweeted, "The opinion of this so-called judge, which essentially takes law-enforcement away from our country, is ridiculous and will be overturned!" Because of the "terrible decision," he later added on Twitter, "many very bad and dangerous people may be pouring into our country."