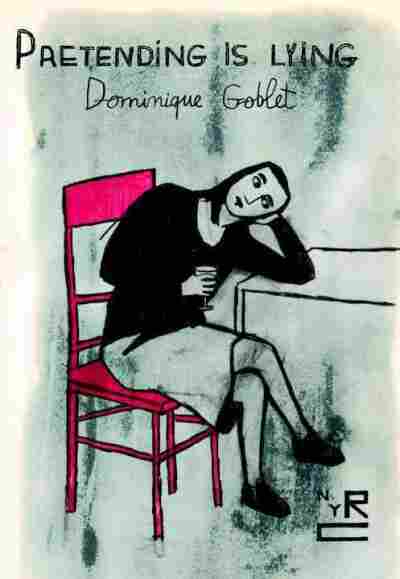 by Dominique Goblet and Sophie Yanow

Photography has lost some of its authority in recent years — as a discipline, at least. Its specialized mysteries have been torn away from their magical light boxes and poured through the irises of millions of plastic cellphones. But it still leaves an irrevocable signature on those artists who take it seriously — like, for instance, Belgian comics creator Dominique Goblet. Her approach is postmodern, with a scruffy, anything-goes mix of styles and moods, but it's marked everywhere by her forays into photography. She's fascinated by the same aesthetic conundrum that has captivated photographers throughout the medium's history: Can a photograph tell a lie? Can it ever not tell one?

True, there aren't any photos in Pretending is Lying, Goblet's award-winning 2007 book, just released in translation by New York Review Books' comics imprint. But Goblet intersperses her tale — an autobiographical account of family, a lover, truth, lies and brutality — with images that look like photos. Recollections of childhood traumas and a love affair are punctuated by frozen urban tableaux: a nuclear reactor, a water tower, a parking garage. They seem to represent Goblet's yearning for a moment of silence. Even a view of a softly simmering reactor seems to offer a respite from the emotions churning in Goblet's drawings of clueless, angry, confused and confusing people. But, of course, the modern world never really offers us peace. That reactor is actually a busy destroyer.

Goblet's characters are incredibly alive, full-bodied and appealing even when they hurt one another. In the best tradition of Expressionism, she distorts people's bodies to reflect their impact on those around them.

Goblet's characters are incredibly alive, full-bodied and appealing even when they hurt one another. In the best tradition of Expressionism, she distorts people's bodies to reflect their impact on those around them. A child's fear of her alcoholic father — and, years later, Goblet's disgust with him — is conveyed through an exaggerated black mustache and the zooming, changeable lines of his limbs and belly. Goblet's lover seems to offer the promise of stability. He's as sharply etched as a woodcut. But then he starts falling apart, his fixation on another woman reducing his outline to an awkward collection of shapes.

Even Goblet herself changes dramatically according to who sees her. When she's with her daughter she's a vastly elongated figure, her arms and legs as snaky and enclosing as a sea monster's, her head a tiny afterthought. With her boyfriend, she's ludicrously pert and accommodating, all eyes and flippy little-girl hair. Goblet brilliantly captures her own desire to efface herself, showing cartoon-Dominique twisting her head and body around in order to seem unthreatening and malleable.

Still, Goblet's work is tightly entangled with her photographic sensibility. As her characters swell, shrink and contort, a larger mystery looms over them — and like her urban "snapshots," it's particularly photographic. Here and there throughout the text, in full-page, pencil-and-ink etchings, Goblet depicts a hazy figure floating in darkness. These figures are barely more than pale blotches, but the darkness around each one is made up of countless short, precise strokes. It's more tangible than they are.

By adapting the forms of photography, Goblet puts that medium's central question to broader use. "Can we tell the truth?" she asks. "Can we ever not?"

These drawings bear a close resemblance to ghost photos — a form of photography that specifically promises to capture an otherwise-intangible truth. But what are these figures the ghosts of? Could they perhaps represent the shadow of reality behind our fantasied constructions of other people? If that's so, then what's unimpeachably "true" in our relationships is woefully inadequate. The only "truth" these images are telling is of the impossibility of truth-telling.

Such a complex contradiction needs a multilayered and versatile artist to explore it. By adapting the forms of photography, Goblet puts that medium's central question to broader use. "Can we tell the truth?" she asks. "Can we ever not?"